There was light traffic and trash today.  We got honks from Mr. Handyman and the tan SUV.  It was a fairly boring walk, no money and nothing to fling.  The smoke has returned with a vengeance.

They’re telling us the smoke is equivalent to 6 cigarettes a day.  Smoke’em if you got’em.

We came across another dead crow. We found two separate bags of McTrash like this on Norway Hill, as well as another present from the McLitterers. 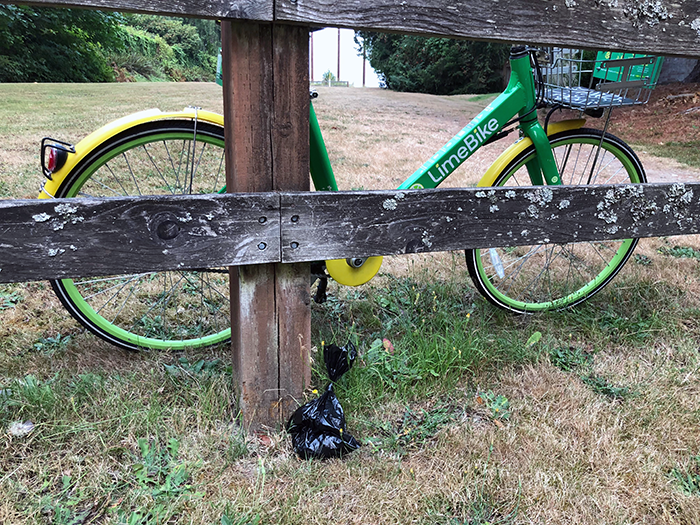 this time trying to blame the LimeBike. 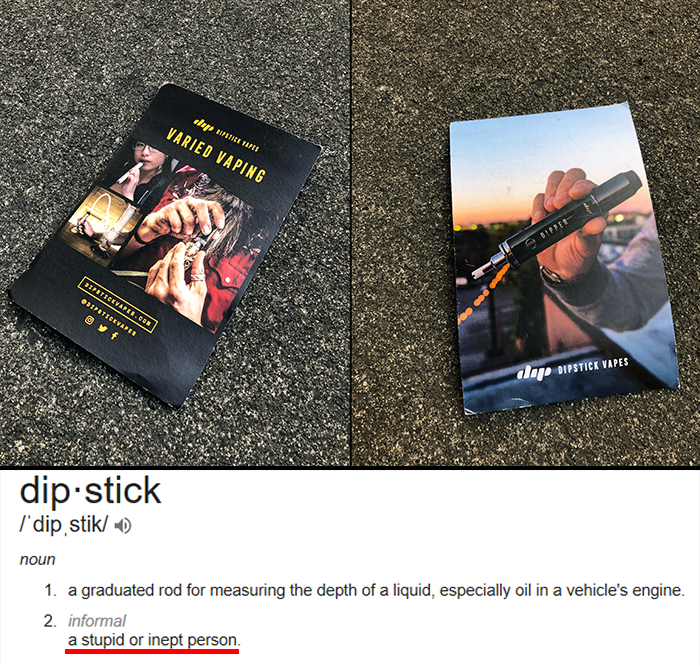 These guys need a marketing department.

This was another smoky day and we did our part to filter the air with our lungs.  We waved to Mr. Handyman and found two bristles, but no money and nothing to fling.  I walked left-handed today to give my right arm a rest.  The bags were on my right hand and I picked up stuff with the left.  It was an awkward walk.  Lots of cigarette buts in my recycling bag.

We did find a pair of earless sunglasses, 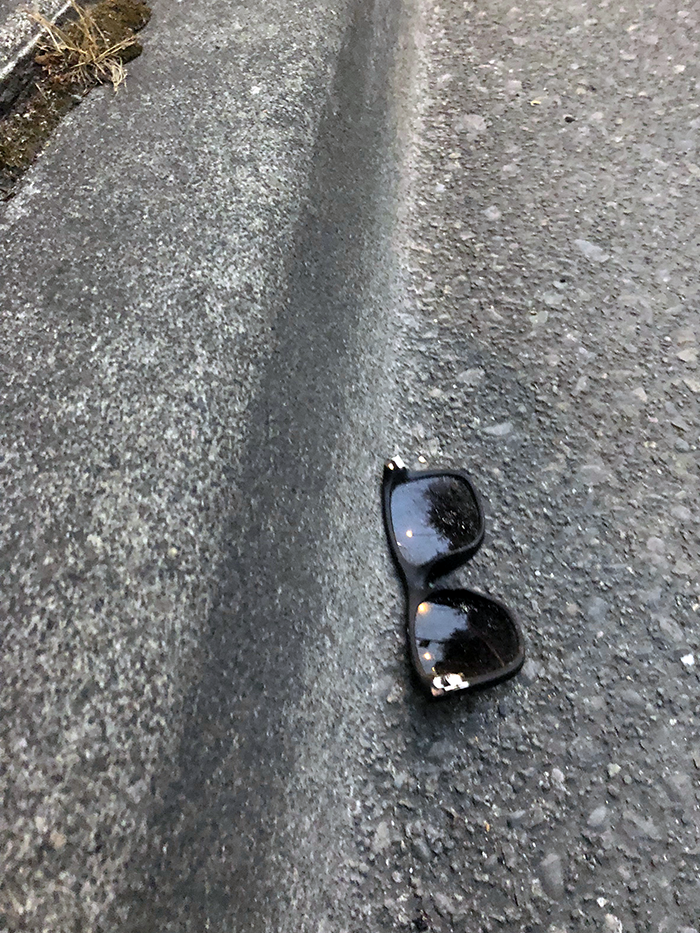 and a high-intensity charging system.

But it had been discharged.

At the Park and Ride, we found evidence of drug usage.

This one had been here a while.  The city mowed the weeds and uncovered some hidden trash.

We came across a used condom,

and a pair of rubber gloves.

All three were along the same stretch of road – we don’t know if there is any connection.

We recycle Styrofoam at the Recology Store, so when we find a scene like this one we carry it home.

We each took one.  They were very light but bulky.  On the way home, two different people stopped and asked if they could get rid of it for us.

We thanked them but kept it.

Today was yet another smoke-filled walk.  We are supposed to get some relief tomorrow.  Trash was fairly light, but the traffic was heavy.  We got a honk from Mr. Handyman and flung a small bird.  We found a dime, a bristle and a rubber glove.

We saw this on top of a parked car.

Littering reached new heights.  We are careful about touching vehicles so we left this alone.  We will probably pick it up off the street tomorrow.

We found another ball for our ball collection.

We got a nice thank you from a passer-by on the at the top of Norway Hill. 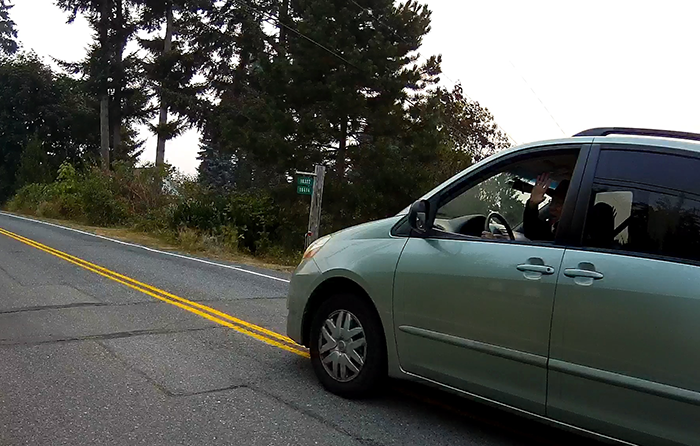 The lady on the other side told Janet “You’re very good.”

We found a sad, lost ducky.

It hides its feelings well.

This morning was overcast, cooler with a slight breeze, but still smoky.  As we finished the walk a slight mist had started so the air may clear.  We came to a roadkill crow, but it was flattened and I only came away with a couple of wing feathers, so no flings today.  We found two bristles.

As predicted, the McDonalds bag on the car yesterday was on the ground today. 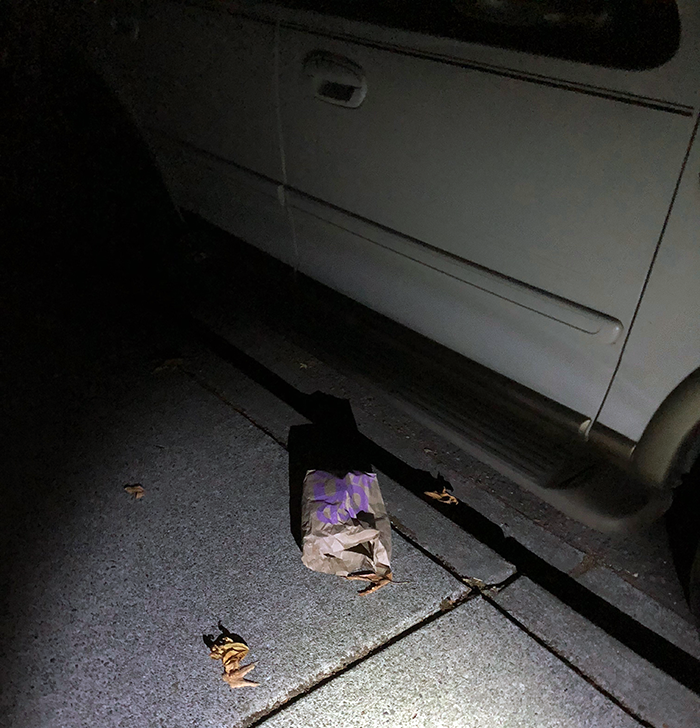 We found another ball for the collection. 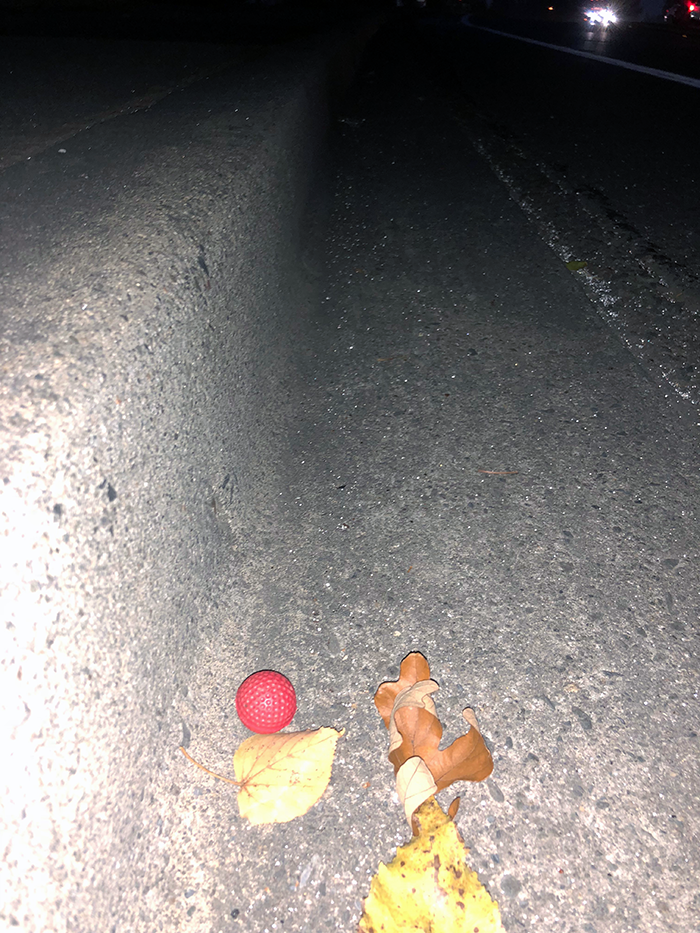 We also found a pair of shorts near the bus stop. The pockets were all turned inside out so someone had rifled the pockets.  They are headed for Goodwill.  We also found a work glove. 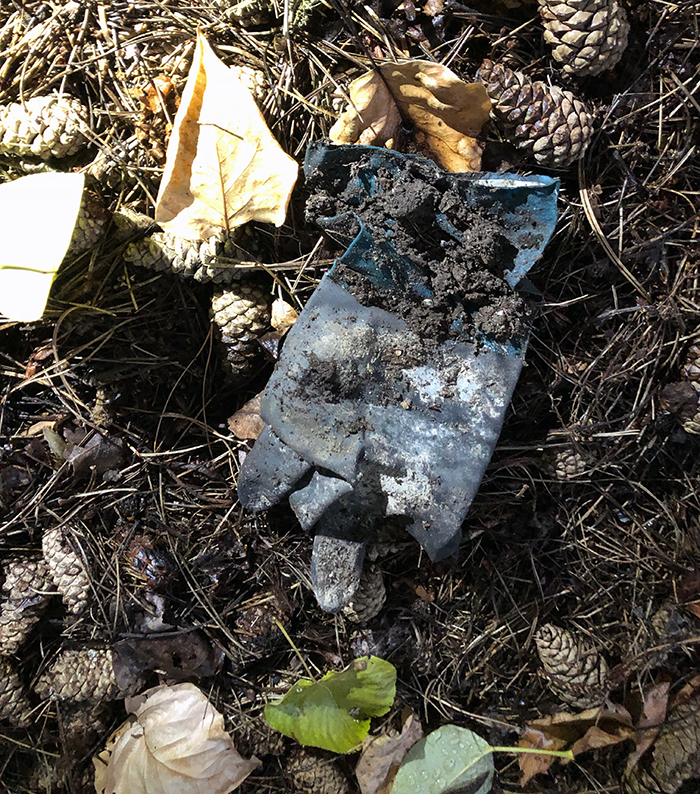 Definitely not headed for Goodwill.

We found a cordless phone.

It must have been out of range. 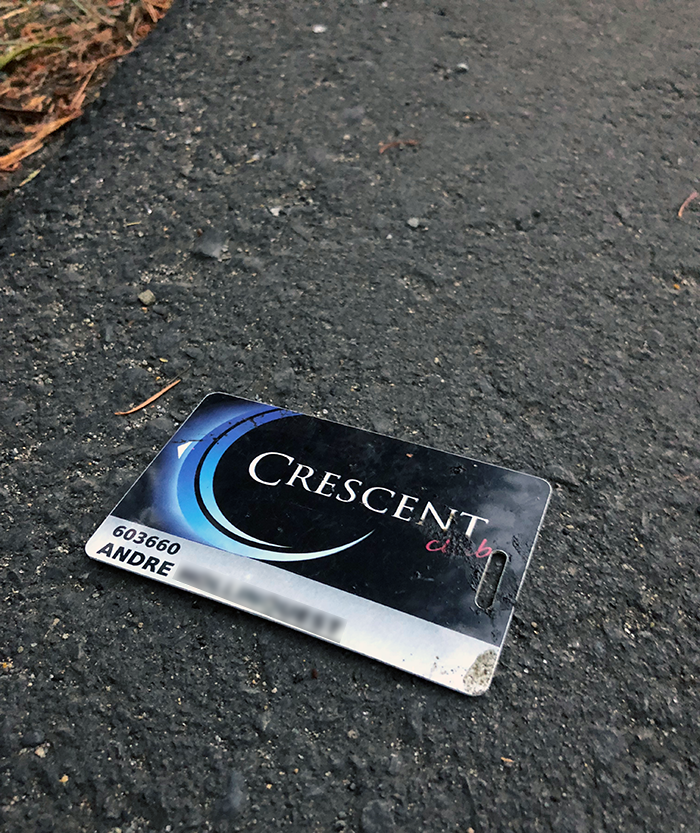 We found four of these on Norway Hill:

That is some expensive scratching.  Maybe he bought five and the one he kept was the $2,000,000 winner? 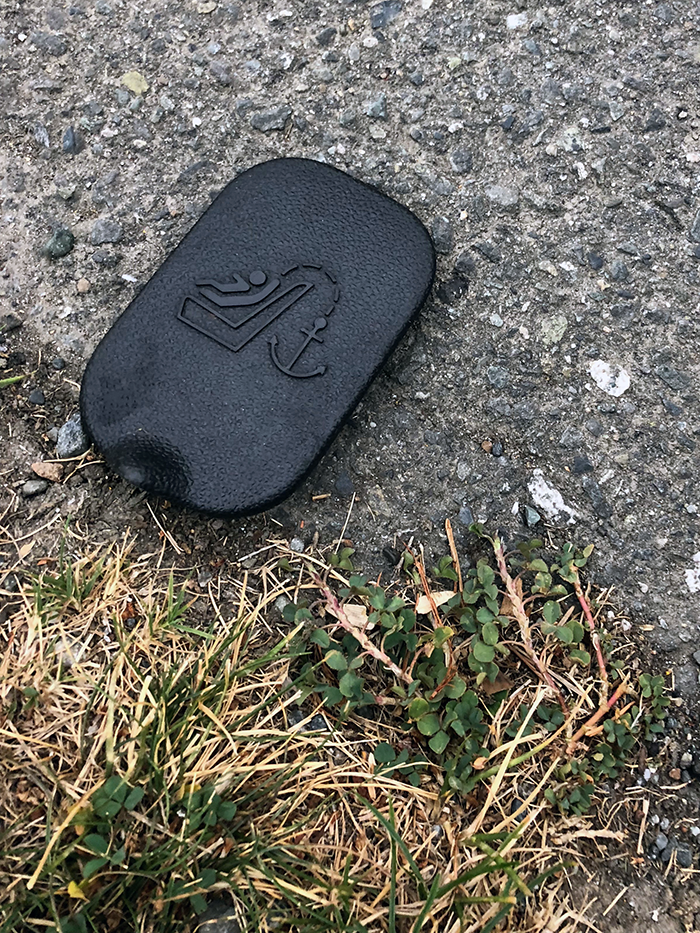 Taken out of context, this is kind of gruesome.

We find that cans are territorial.  By far, we find more of these cans on Norway Hill than any other brand.  On Juanita-Woodinville Way it’s Coors Light and on Riverside Drive Modelo.

The air today was more breathable.  There seemed to be about 50% less smoke in the area.  We did not get any honks but got a few waves and another hello from the green minivan on top of the hill.  We didn’t find anything to fling unless you count a toy ring.

We found a toy ring that had strayed from a daycare center.  Janet flung it back.  We did find another dead crow,

but it didn’t need flinging.

We found a glove and a bag for some Beats earphones. 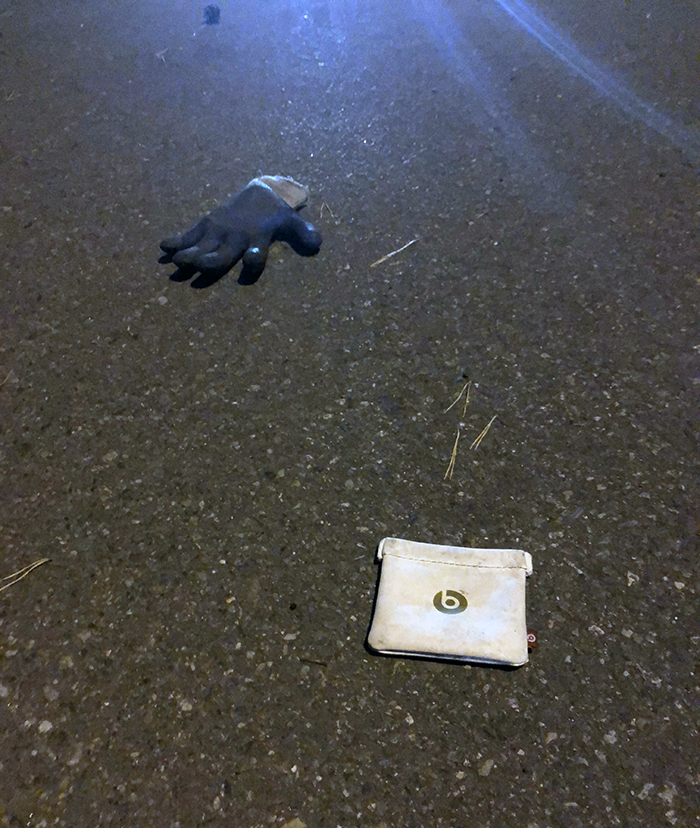 The bag was empty.

We came across a discarded cassette tape, 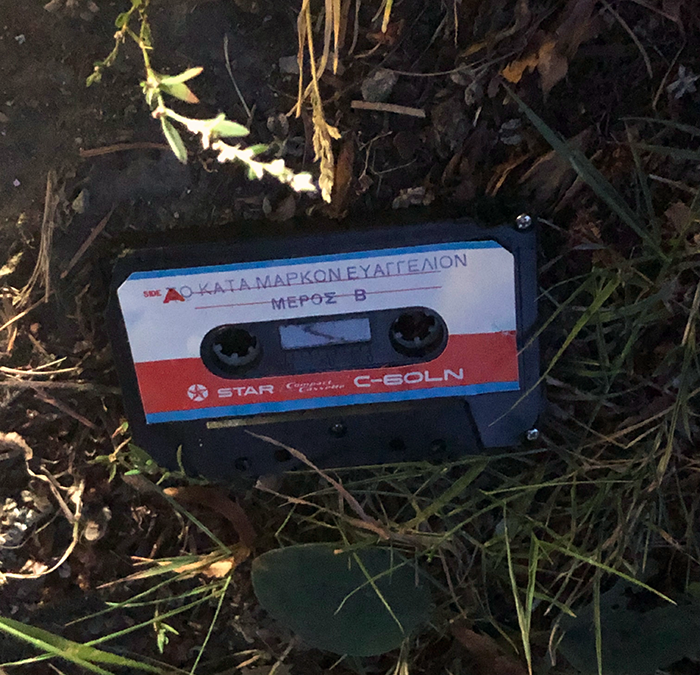 but it was Greek to me. 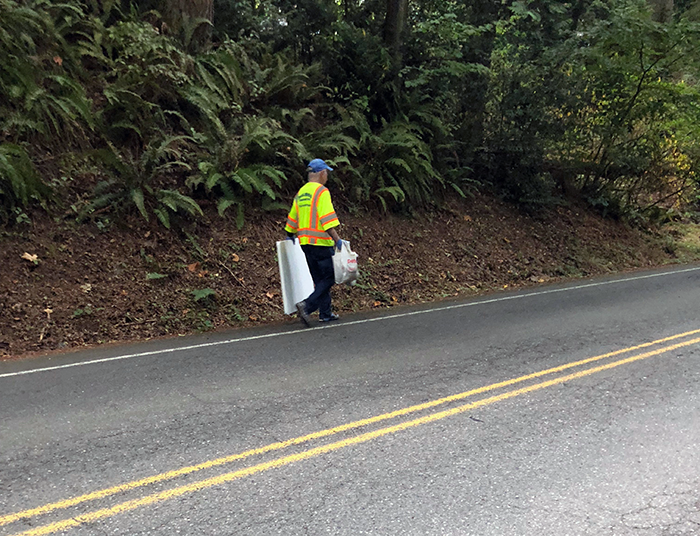 Ten weeks now for the LimeBike.

It’s not leaning against the fence, so someone may have ridden and returned it.

Today was smoky again and down in the low 50s for the first time in a long while.  There was quite a bit of trash down the hill between the fresh droppings and that surfacing as the mown weeds decay.  We found a dime, a penny and two bristles.  We also flung a rat and two snakes.

It has really been a bad year for snakes and crows.

We came across a flip. 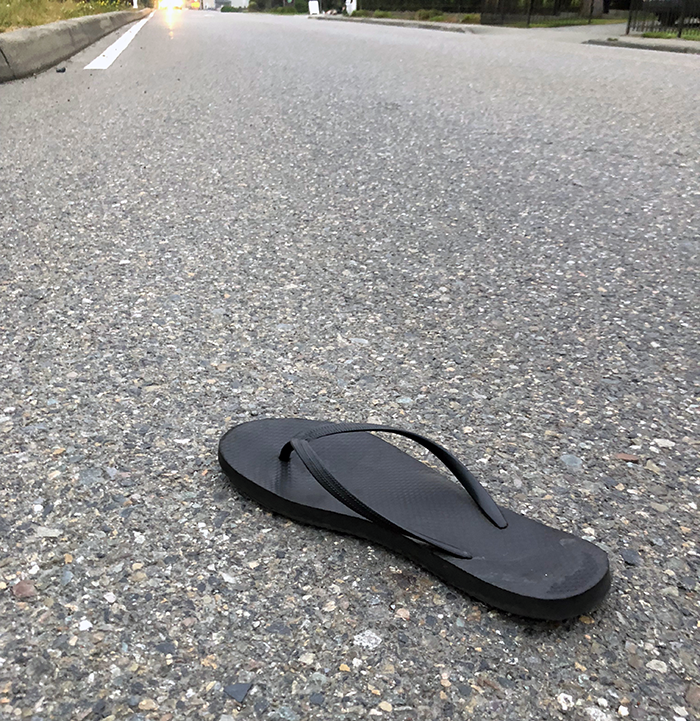 Or perhaps a flop.  Hard to tell.

We found a pair of matching rubber gloves about a hundred yards apart, another rubber glove and a work glove.

Last week, we were surprised at the lack of large wine bottles at the usual location.  Today we found some.

There was another one buried too far in the berry bushes to retrieve.  The universe is back in balance.

We also found another bunch of Elysian beer bottles in front of the new gun club. 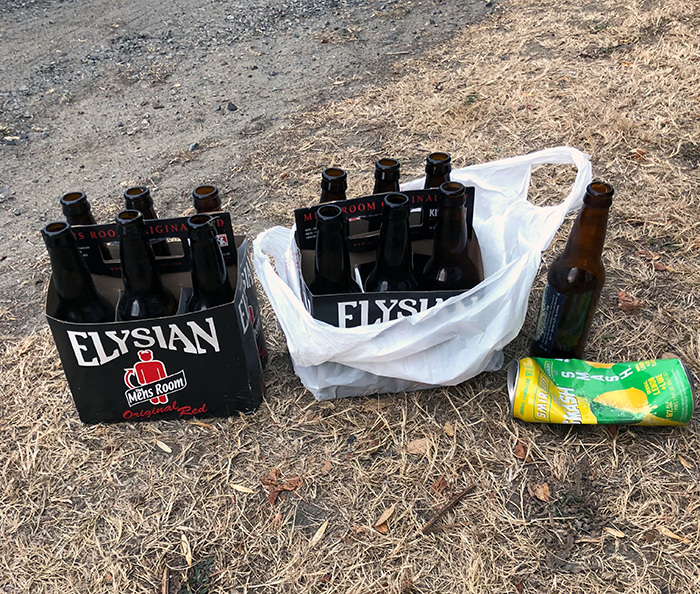 However, unlike last week, we didn’t see the accompanying trash in the bushes.  I sent an email to them explaining our concerns at the upswing in trash and that if it was the workmen to please ask them to stop.  The person responded quickly saying that they had suspected someone partying at night on their site and had set up some security cameras.

Either the trash last week was a one-time occurrence, or the person spoke with the crew and they stopped littering.  Either way, we were glad not to face that today.

We found a large bag of trash in the bushes near where we found the tire last week.

This one had been there a while.  We stuffed it into another bag and lugged it the two miles back home.  It was not very heavy, but it was bulky.

We found another pair of underwear in the gutter.

They were Seahawks colors and the waistband had Russell on them.  Janet thought they might be Russell Wilson’s.