The weather today was a bit chilly at 35F.  The trash was moderate, but diverse which made for a long walk.

The first thing we came across was a real mess.  It looked as if someone either emptied their car or a car was ransacked.  The bushes by the apartments were littered with stuff.

There were articles strewn in the thorny bushes and several things suspended from the various branches.  Some of the things we retrieved were new paper cups, Trojan Lubricant (be careful what you store in your car), toilet paper, a full set of 2010 Honda Accord owner’s manuals, a mirror and a Timex clock.  Timex, it keeps on ticking.  Well, not this one.  The person who owns this stuff had a penchant for owls.  Many of the items were decorated with owls.  We gathered up what we could and placed it in an owl box near the scene.  A lot is still in the bushes since it is deep in the berry bushes.

We found part of a food container. 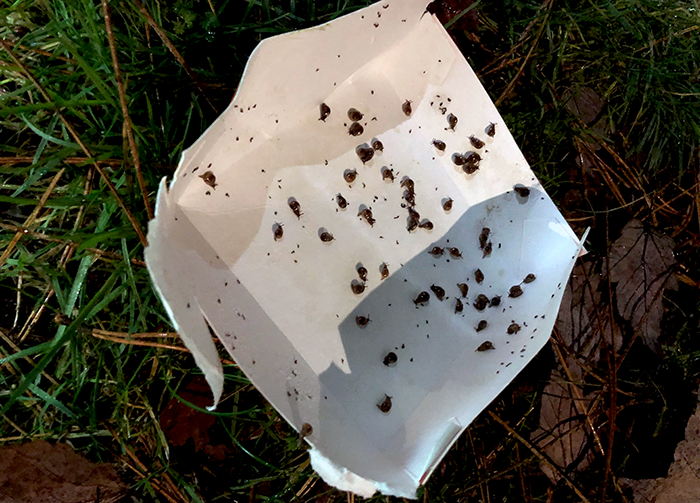 It had a lot of baby slugs on it.  We took the trash but left the slugs behind.

Finally, some truth in advertising.

One Size Fits Most.

But we did find some discarded Little Trees air fresheners.

One for each of us.  Our garbage bags smelled so good.

We found this near Safeway.

Someone is getting high on Triple C.  We’ve never heard of it.

Yet another irresponsible pet owner (YAIPO). 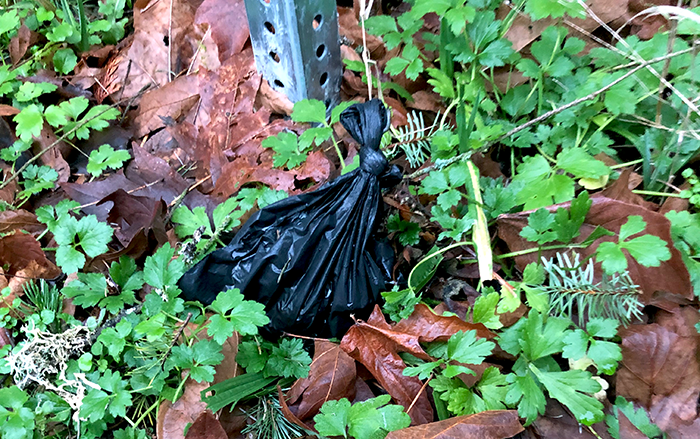 This is a serial YAIPO who regularly drops bags by this sign on the walk.

We found a foldable iPhone.

We just don’t understand the foldable phones.  Maybe we need to use one.  It looks like this one would be hard to open.

On Norway Hill, we found more of the VooDoo Ranger bottles and nearby a pizza box.

Some party.  They neatly replaced the caps.  Yes, they were empty.  Hey, we are still waiting to find the remaining bottles from last week’s six-pack.

By our home, we found another of the McLitterers’ trash. 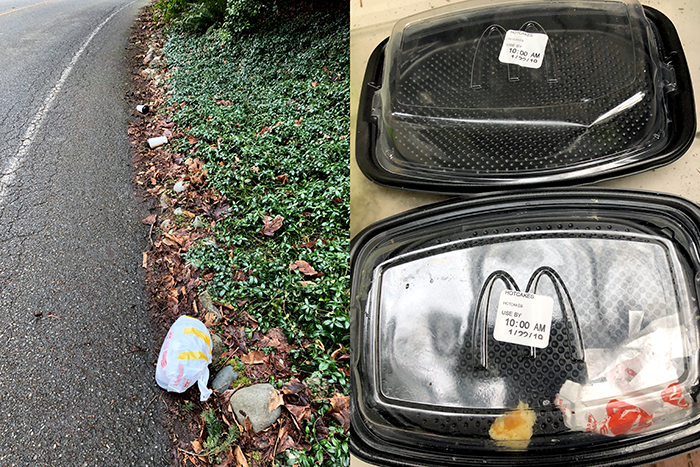 We need to get a camera set up here.

Early during the walk, we found a smashed cardboard box.  When we were sorting the findings, we found this note in it. 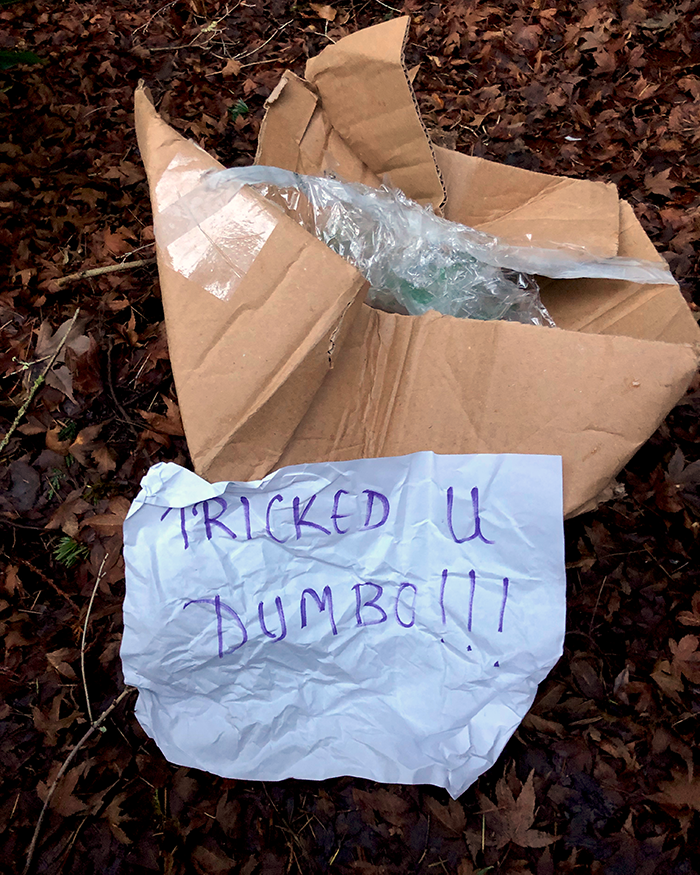 Obviously, a Porch Pirate stole it.  Good one!  Not as good as this, though.

We got off to a slow start this morning which caused us to run into more traffic than usual, but there was less trash than yesterday.

At the Park and Ride, we found the remains of another party. 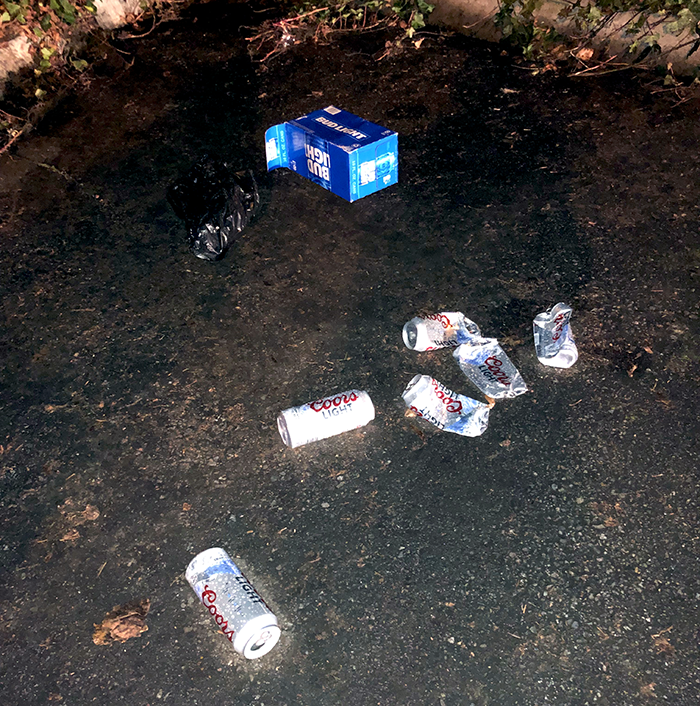 This is confusing.  A six-pack of Coors cans and a Bud Light box.  Maybe it was one of those surprise box things?  We also found one sausage stick wrapper.  You can’t drink that much beer on an empty stomach.

We found a University of Puget Sound coffee mug. 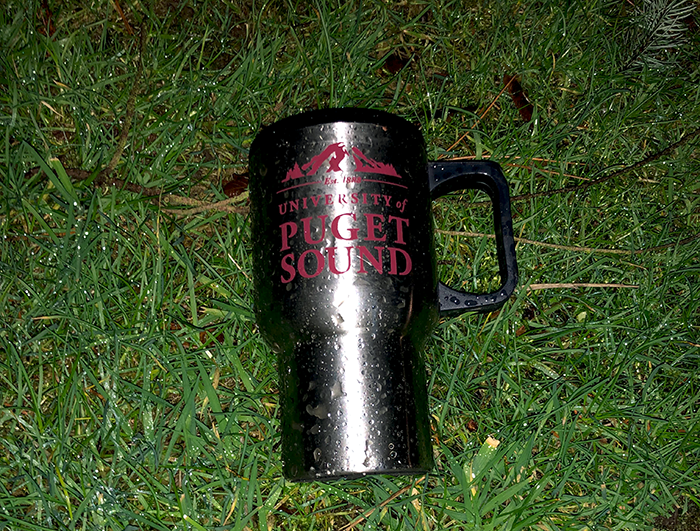 We had never heard of it, but according to Niche, it is ranked as the 8th best overall ranked 4-year school in Washington State.  That isn’t bad given there are 62 schools that ranked.  Maybe whoever tossed this flunked out.

White Grape flavor.  Really?  It must not have been good since they left one in the package.

So, it sounds like you put your makeup on then spray this on to seal it?  It reminds us of grammar school when we made chalk drawings and the teacher sprayed them with something to keep it from smearing.  You could get high sniffing that stuff.  It reminds us of some movie scenes in Death Becomes Her.

We found two hubcaps about a hundred feet apart. 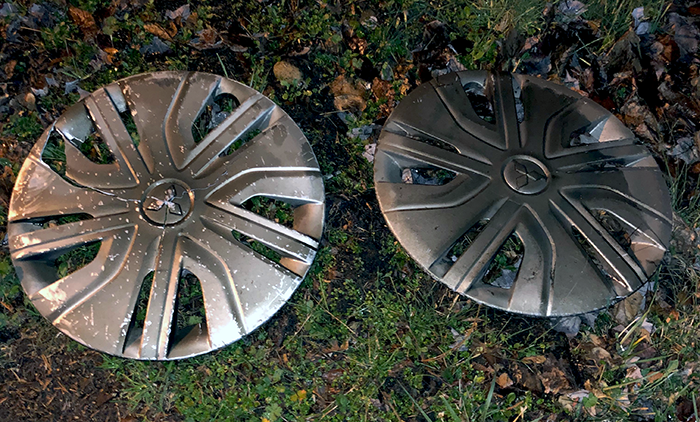 They were a matching pair of Mitsubishi Mirage caps at about $100 apiece.  Maybe the person lost one, it got run over and then tossed the other to make the vehicle symmetric?  We carried them for a while, but two hubcaps are cumbersome.  We placed them behind a concrete road barrier and later, Janet stopped by with the car to retrieve them.  They were again strewn along the road fifty feet apart.  Who knows?

After the mess we found yesterday in the bushes, we discussed going back today prepared to wade into the berry bushes.  When we arrived, someone had cleaned up most of the items.  We still managed to find an owl shopping bag full of stuff.  One of the items was a receipt from a car service with an email address.  We emailed the owner to see if they want what few items we picked up.  No word yet.

We had a constant light rain this morning and the temperature was mild for January.  We got a honk from a pickup truck driver.

As we started our walk, we ran into a stampede of newts along the road. 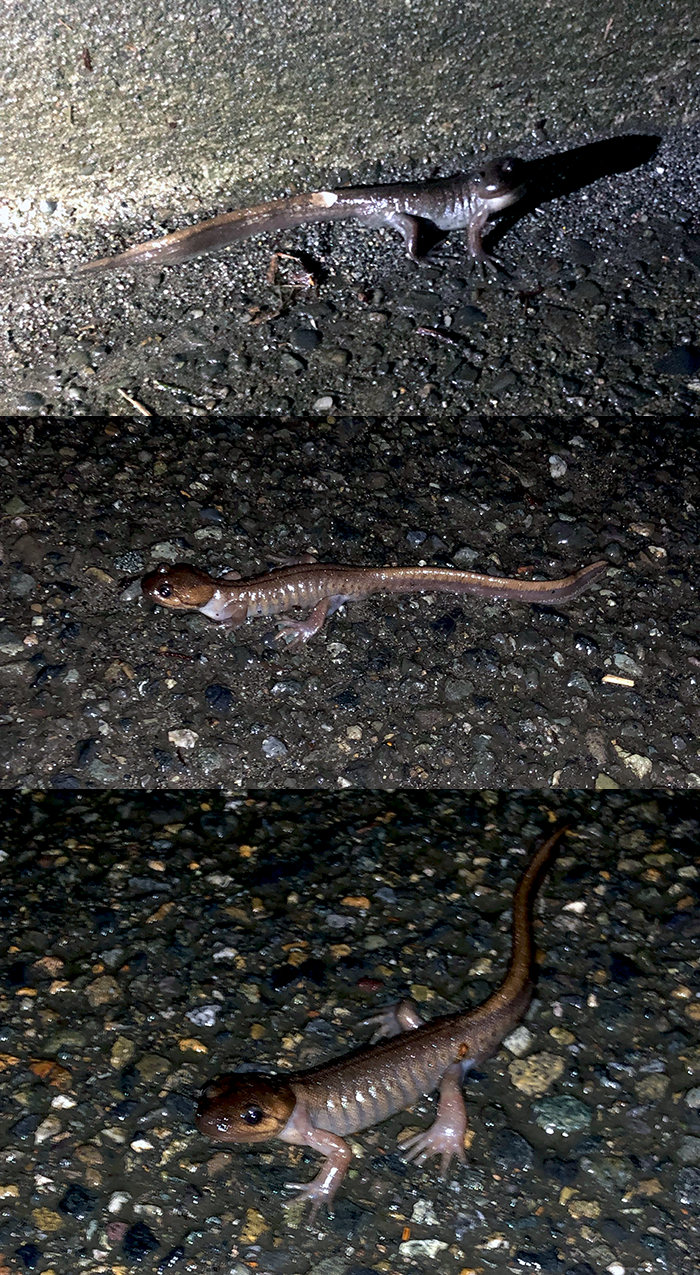 At least we think they were stampeding, it’s hard to tell with newts.  We let them be, but we may be flinging them tomorrow.

They’re a buck apiece at Target.

We found another tool for our collection. 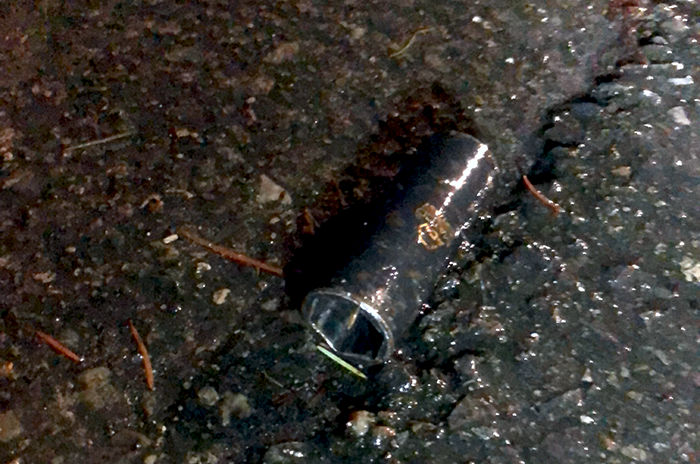 Matco 17mm impact socket. These things are expensive, $29.20 online.  We’ve found a few of these.  One of these days we’ll get an impact wrench.  Our take today is adding up.

To round out our walk, 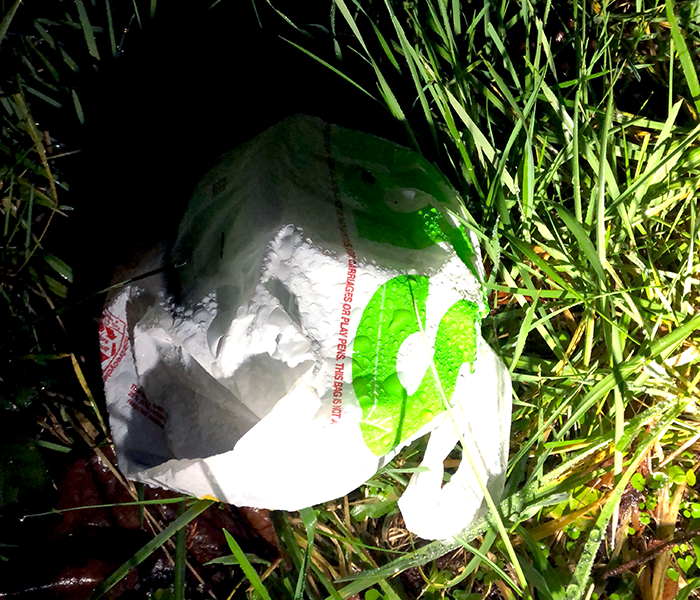 the McLitterers left us a present.  This one was not near our house.

There was a constant fog/light mist this morning.  Traffic was heavy, but the trash was relatively light.  No sign of yesterday’s newts – dead or alive!

We found the best kind of cigarettes. 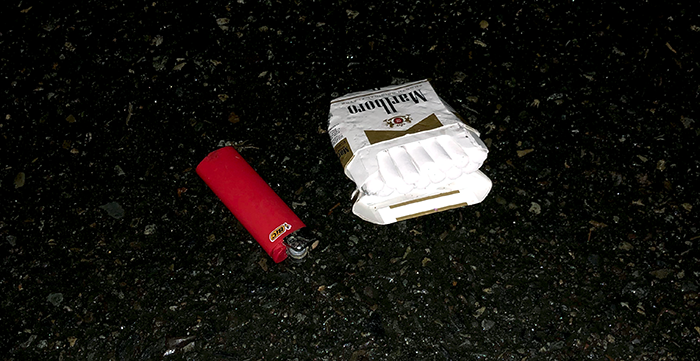 The unsmoked kind.  The lighter was with them and was out of butane.  Maybe that’s why the cigarettes were dumped.

A King County Superior Court juror card at the park and ride.

Probably someone accused of littering.  The jury is still out on this one.

We got a nice “Thank you” from a driver on Norway Hill.

We came across this in the bushes.

A bag with some power tools in it.  We will attempt to find the owner.  We suspect this was stolen from someone’s vehicle and dumped.

And on the hill,

We may have lost track, but if this is from the original six-pack we found, there are still two missing.

This morning was dry and not too cold which made for a pleasant walk.  Also, Kirkland swept part of Juanita Woodinville Way so there were few cigarette butts along it which made for a quicker walk.

Outside of the KinderCare, there were three escaped balls. 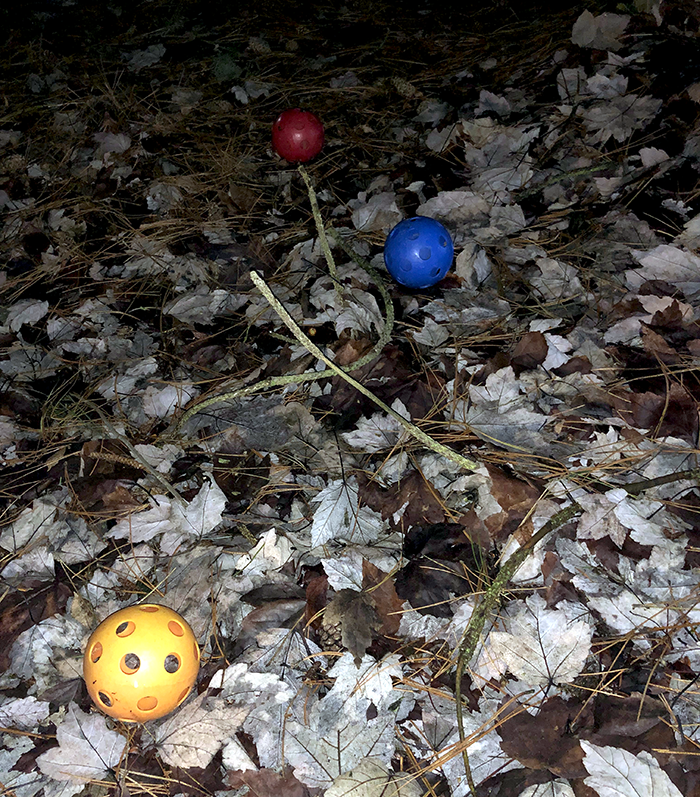 They got tossed back.

Burnt foil and a straw found at a secluded parking area near Safeway.

And then there was one. 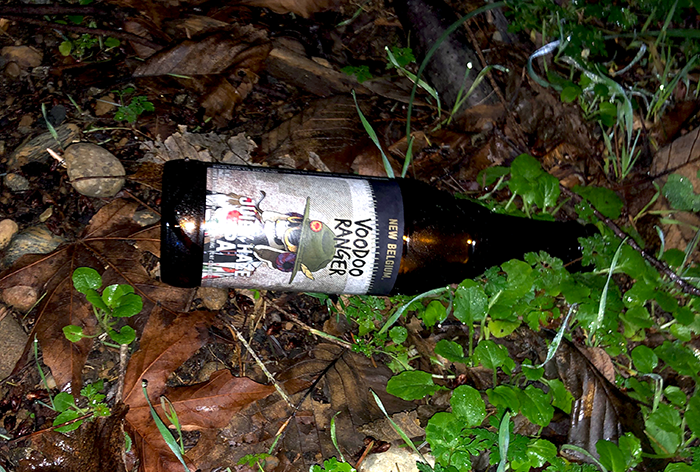 At the top of Norway Hill in the early twilight, an eerie fog had settled in.  Then we saw, Dracula’s

false teeth.  He probably dropped them in his haste to beat the sunrise.  Give him a break, the guy is nearly 600 years old.

This morning was cold and foggy.  Although the temperature was above freezing, there was a lot of ice on the trash we picked up.  It was not a pleasant walk.

We found another small wine bottle in the Sammamish River Park.

We have been finding one or two of these each week.

The rubber glove of the day.

Someone lost their confidence.

We certainly can’t give them a vote of confidence.

It’s not that bad.  We saw the movie.  In our day, it was called Detention.  Perhaps that’s not a politically-correct term anymore.  It’s called Saturday School.

It’s amazing the number of these we find.  They cost over ten dollars per pack.

And to go with the cigarettes, another butane torch. 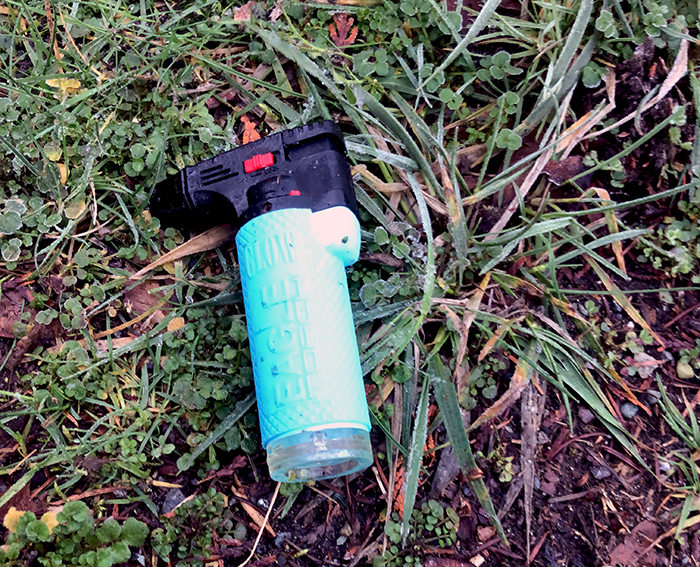 These cost about twelve dollars for four-pack on Amazon.  This is just like the one we found last week with a nearly-full pack of cigarettes.  Strange.

We found a balloon that had lost too much helium.

Hopefully it was not someone’s trial balloon.

We found this ice-covered bag.

It is a carrying case for a dog hammock.  Dog hammock?  Looking at it, it makes sense.

For once, the condiments were open.  Of course, they were opened when they got run over by a car.  It was a sticky mess.

We came to this sight. 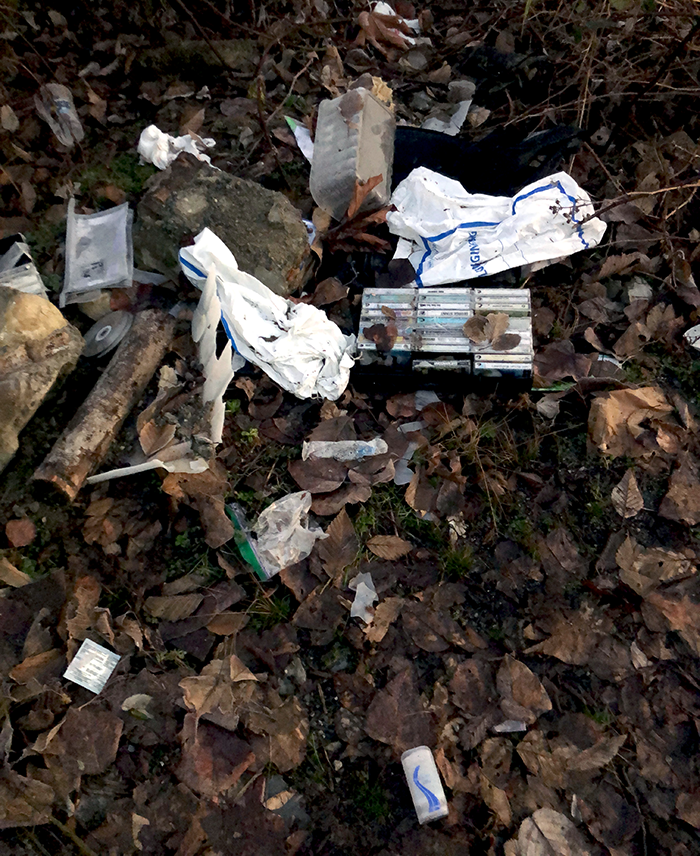 It was dumped on the river access road.  It included some music CDs and a bunch of cassette tapes.  We also saw more trash farther down the road.  At this point, we were cold and didn’t have the energy to clean it up.  We will go back sometime with the car and haul it home.

One thing they dumped is in the lower-left of the photo above. 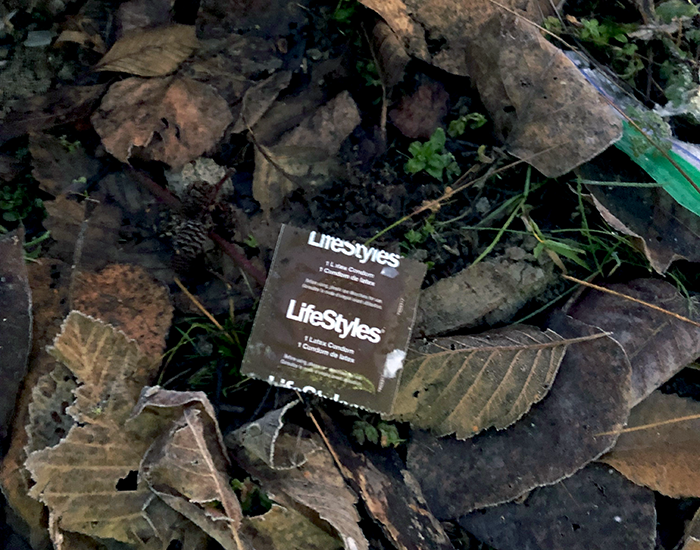 An unopened condom. They should have kept it.  It would keep people that dump trash like this from procreating.