The temperature today was a more comfortable temperature, but it was raining.  So it was a wash.  Literally.  There was a lot of soggy trash, probably because we had a minor windstorm over the weekend.  We didn’t come across any roadkill and didn’t find any money.  Regardless, we were Good Samaritans today.  We tossed three toys back over the fence to their rightful owners.

A basketball returned to a neighbor. 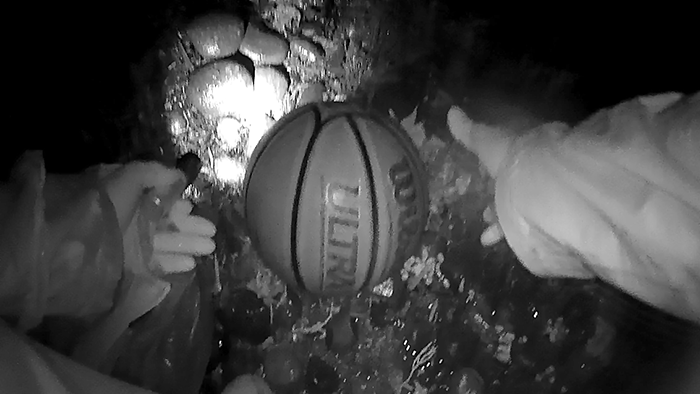 And another toss ring to KinderCare.

A softball back to school.

Back to School was a pretty fun movie, by the way.

At the “Free” corner, the old furniture from last week was gone.

And they say there’s no such thing as a free lunch.  But there is free firewood.  Well, unless you count the cost of gasoline.

We passed under the large item of trash.

I got on Janet’s shoulders and still couldn’t reach it.  Guess we’ll need another windstorm to get rid of it.

But not for a day.

A student in trouble?

“Please gather all your thigs [sic] and MEET your parents in the attendance office.”  Uh Oh, someone’s in trouble.  We thought thigs was a typo, but we were wrong.  According to The Free Dictionary, thig is related to begging.  So the parents are pulling their kid out of school to beg???

Here is someone who’s in trouble. 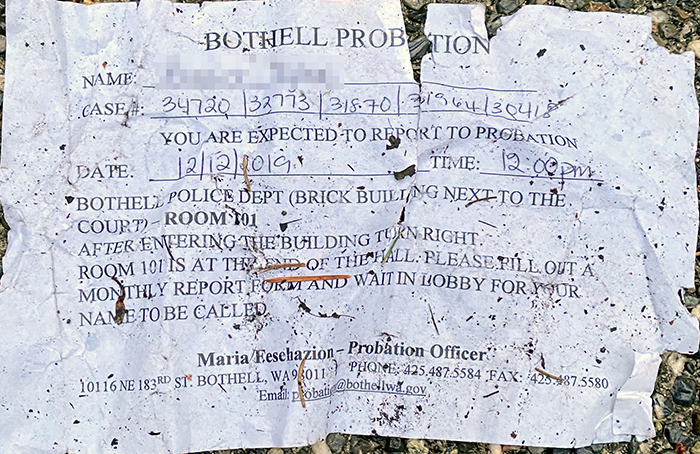 He’s supposed to show up to meet with the Probation Officer on December 12th, but he tossed this under a bench at a bus stop.  Do you think he plans to make the meeting?  Of course, the wording is kind of lax.  “YOU ARE EXPECTED TO REPORT TO PROBATION.”  “YOU MUST REPORT TO PROBATION” is more assertive.  Maybe they have realistically low expectations.

It was cool today and rained through the night, but held off during our walk.  We picked up quite a bit of random thrash, most of it wet.  We found no roadkill and no money, but did wave to Salinas Construction.

Last week, we found an S-Carabiner in bad condition.

Today we found another one from the same company.

This one is smaller, but in pristine condition despite being in the middle of the road.  I don’t think we would use it for our next mountain climbing adventure.  Wait, we don’t mountain climb.

As we were leaving our house, we found a Taco Time Tokus cup in our yard by the side of the road.  Then a hundred of so feet farther, the bag with another cup and their typical leavings.

Then, on the other side of the hill, we found another two cups and this bag in the ditch. 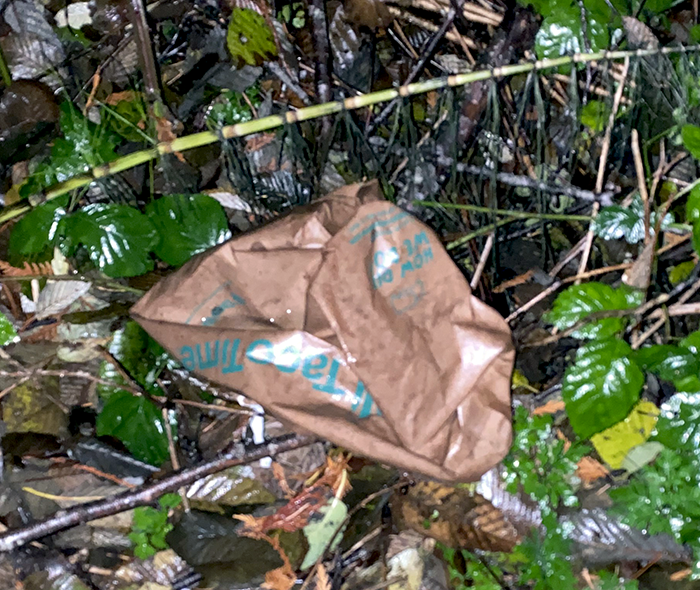 Neither bag had a receipt in it.  They may be wise to us trying to track them down.

Someone lost or tossed a book.

The Red Pyramid.  $12 on Amazon.   It has good reviews.  The shipping weight is almost a pound and has five hundred and forty-four pages.  Five hundred and forty-four waterlogged, cold, heavy pages.  We carried it for awhile until we found an inviting bin to deposit it in.  No we didn’t return it to the Public Library book return drop.  Or, book return drip in this case.

Someone left us a couple of sandwiches on our route.

They had a green tinge to them.  Thanks, but we passed.  The book looked more appetizing.

The weather today was about the same as yesterday, but the trash was mostly dry which kept our fingers warmer.  There was a moderate amount of trash but, being the day before Thanksgiving, traffic was very light.  As we were passing Safeway, Maureen who posted about us on Facebook here and here.  Came across the lawn from the Safeway gas station and thanked us again for picking up trash. 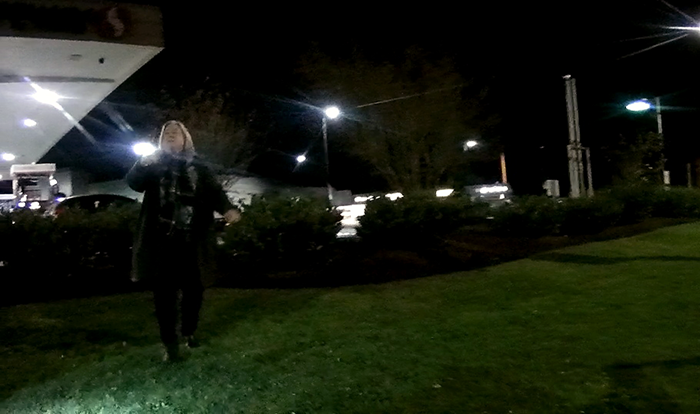 We told her she is mistaking us for the elderly couple.

A sign that the annual gloom is upon us.

The first broken squeegee/ice scraper of the season.

This is cheating for a Thanksgiving meal. 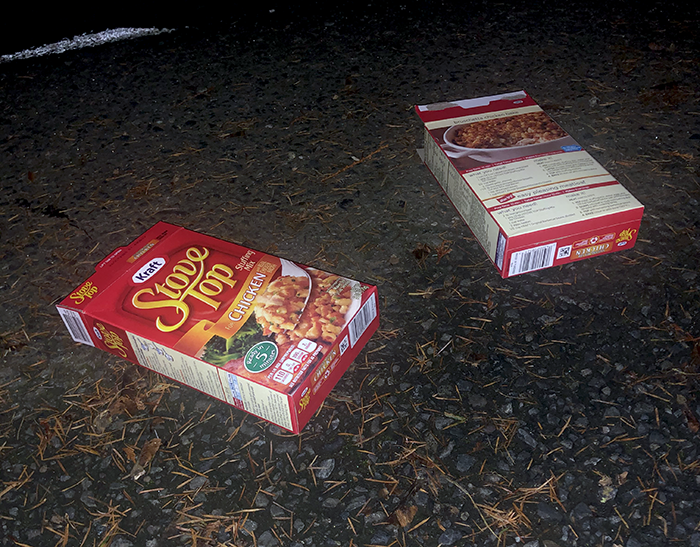 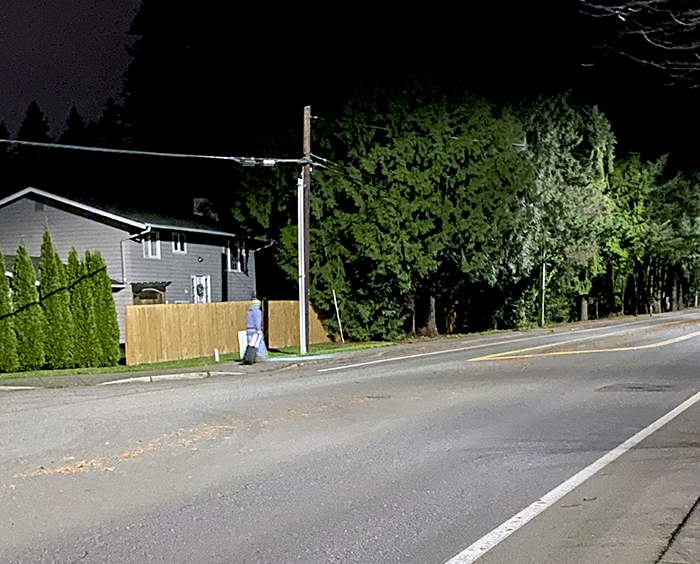 This guy’s walking his favorite suitcase.

At the bus stop someone left a Solar Shield Fits Over.

I use a pair of over-the-glasses sunglasses for driving that I inherited from my mother.  So, they’re probably over 20 years old.  I could use an updated pair, but the bag was empty.

We saw a can in Gatorade Gully so we ventured down to collect it.

Plus six others and a bottle. 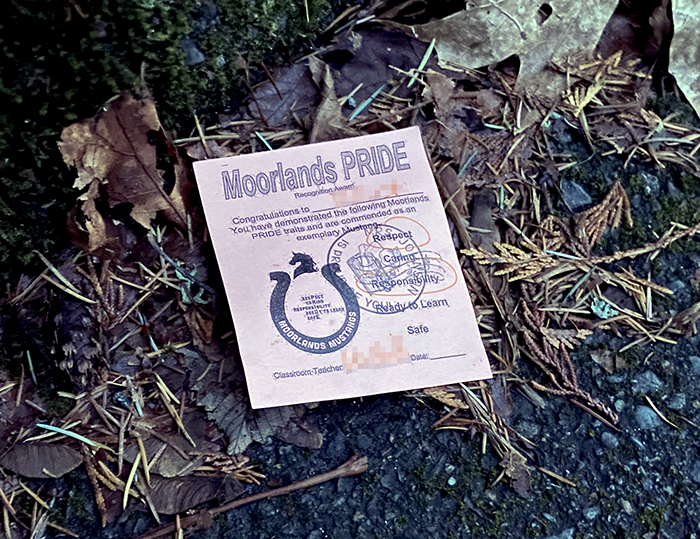 It looks to have a couple of stamps on it.  It looks like the kid got this for Respect and Responsibility.  Other categories are Caring, Ready to Learn and Safe.  Wait, where’s Littering?  This kid excels in littering.

Today the temperature according to our weather apps was 29F or 30F depending on which we asked.  Our thermometer showed it was 32F, so we decided to believe it and walked.  The traffic was very light and, despite the temperature, the walk was comfortable.

We removed a bird, a rat and a very flat rabbit from the roadway.  And, we found some money! 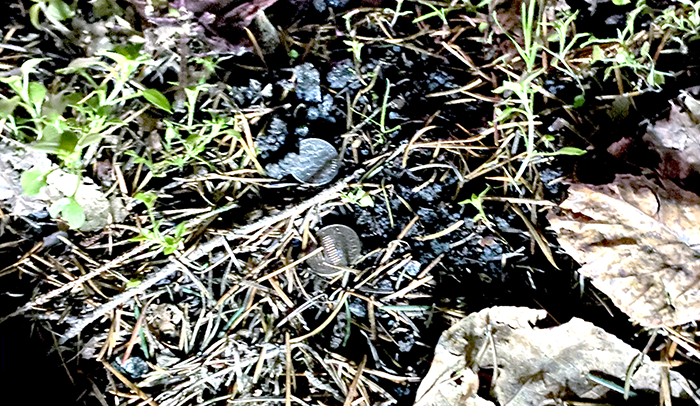 A dime and a penny under the bus stop bench across from the 7-Eleven.  Woo Hoo!

We saved someone from a big flat tire.

The nail was about eight inches long, and made of aluminum.  So, when someone says that a person is “tough as nails”, they probably weren’t talking about this one.

On the freeway on ramp, we found a dog collar.

We had a flashback to National Lampoon’s Vacation “leash” scene.

Across the street on the on ramp, we found a no trespassing sign.

When we walked over to see what it was, evidently we trespassed.  This smells of entrapment to us.  We did see a Metro pickup truck lurking around.

On the median near the park-and-ride we picked up a pair of scissors. 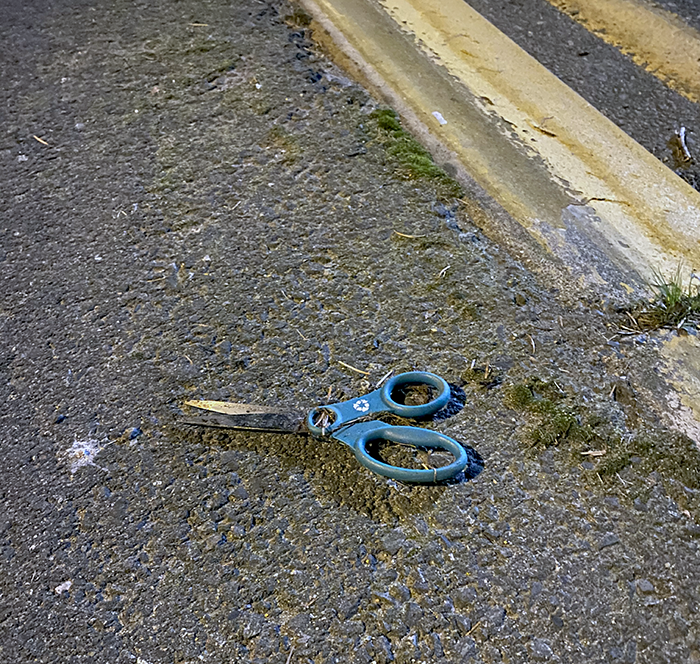 Unlike other scissors we’ve found, these were in relatively good condition.  $12 on Amazon.  and partially made from recycled materials, so we put them in our recycle bag.  Don’t worry, we walked.  We didn’t run with them.

We got a very nice tennis ball.

It’s now in our ball collection. 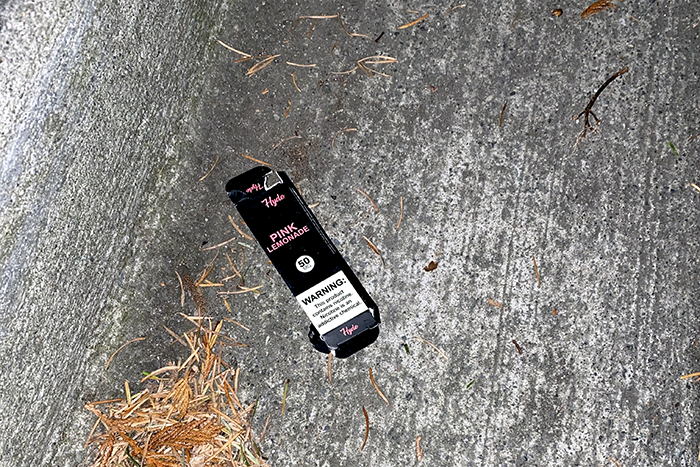 Disposable pod vape pen e-cigs.  Great, but do you have to dispose of them in the street?

Every so often, we find tire weights that have fallen off wheels and put them in a jar.  Today we found three. 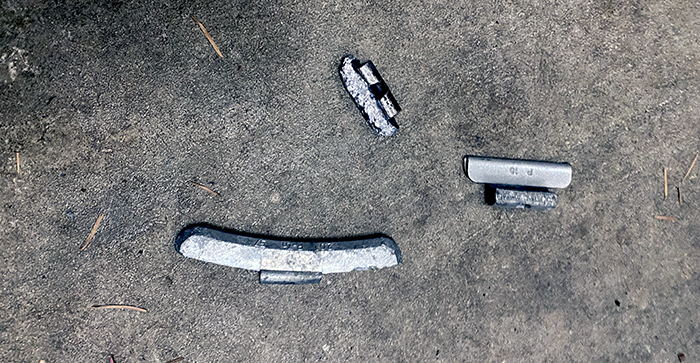 Day by day, the world is becoming more unbalanced.  We have proof.

Since the more-than-a-fender-bender accident on Juanita-Woodinville Ave. a few weeks ago, we’ve been slowly collecting the larger pieces of wreckage into a pile.

We’ll contact the city to pick it up.  You’d think someone would be responsible for cleaning this stuff up rather than letting it “rot” by the roadside.  And, NO!  It isn’t us.

We hope you had a Happy Thanksgiving.

This morning the temperature dropped to 27F which is below our official comfort zone of 32F, so no walking today.  Yes, we’re wimps.

The temperature dropped to 25F this morning.  Cancelled our walk again.  With our extra time, we decided to count our walking money we’ve picked up since the last time time we did it on July 26th, 2018.

We didn’t include the $4.51 Canadian dollars, $1.20 in Mexican pesos and one USSR Ruble.  Here are the oddballs we found during this period.

Three Canadian coins, one Mexican coin and a penny that was smashed into a souvenir.  It seems to have the lettering Evergreen AS  with an old car on it.

What can we say, Ennui set in.  Next freeze, sorting our tire weights.