We had our air conditioner set at 75°F (24°C) and it slowly lost ground until our home reached 80°F (27°C) as the outside temperature peaked at 109.4°F (43°C.) We are fortunate that we have air conditioning. We invited some neighbors over to cool off with some libations, but ultimately cruelly sent them back out into the abating 100°F (37.8°C) heat. We have limits to our hospitality. We did give them a nine-degree head start, after all.

This morning was much more comfortable at 66°F (19°C) so we did walk. We removed a baby crow from the road. It probably did not know how to dodge cars yet. However, we did find money.

A relatively undamaged penny. So nice to know we will not be shut out this week.

The mail thieves were busy over the extended weekend.

We found several pieces of stolen mail, all of it junk, except for what looked to be a mailed high school report card. The student may have intercepted it and tossed it, but we helpfully put it back in their mailbox.

We found a Honda car key.

Federal law mandates that there must be at least 1000 different keys per model, so it would be difficult to find a car matching this key. But this is a “Red CRV.” That should cut down on the odds. We will start testing.

We did find a condom along the well-travelled Juanita-Woodinville Way.

Okay, we get condoms discarded in secluded areas, but seldom along well-traveled roads. Talk about distracted driving. They were probably also using their cell phone at the same time.

The heat wave must have invited folks to shed their clothes. 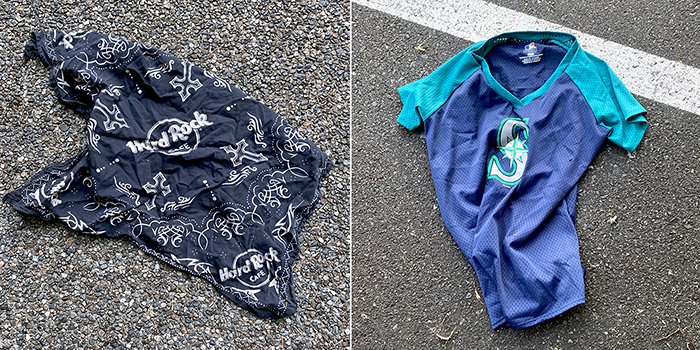 We picked up a Hard Rock Café bandana and Mariner’s baseball jersey. We have found a few of these that have been discarded, but this year, the Mariners are having a winning season, so far. It is early to be dumping your souvenir jersey. 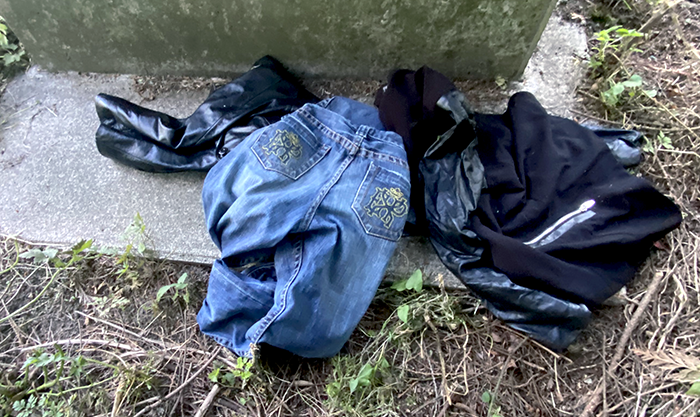 Girl’s jeans, a pseudo-leather jacket and a shirt. If the clothes we find are in good condition, they are washed and sent to Goodwill. Unless, of course, we want them. These were not our size nor our style.

During the heat wave, the electric and gas provider sent out a tweet that during the high temperatures we should refrain from using dryers to dry clothes. These folks took the advice to heart.

Okay, now that the heat wave is over, you need to pick up the clothes and wash them again.

Here’s a way to beat the heat.

Let’s smoke dope. These were all empty, of course. Safe driving, folks.

We also found another golf ball.

Our ball collection was out of hand, so today, Janet decided to take action and get things sorted out.

Now there are buckets for golf balls and baseballs and whiffle balls, and drawers for tennis balls, dog balls, and odd balls. There are also jars for smaller balls. Chuck belongs with the odd balls.

Today was a much more comfortable walk, but we found no money and removed a small bird and an unidentifiable small creature from the road.

The relief from the hot weather must have triggered a release of sexual energy.

Some Trojan personal lubricant, an empty box of condoms and an empty condom wrapper.

Okay, after eight weeks, the TV has been removed.

The city of Kirkland finally picked up the TV set, after some more prodding from us. But wait, did someone post a missing TV Set note???

We did find some more “tools”, but not really. Two small bungee cords.

We thought they would be good to carry with us to tie up bulky trash. However, they were not very elastic and only stretched about two inches. We sent them to the recycle

Well, this is great timing.

Today, the State of Washington decreed that most COVID restrictions have been revoked. NOW we find an unopened bottle of hand sanitizer. Go figure.

A Fishololic neck gaiter, $13 on Amazon. It’s not something to stare at for very long.

Also, a pair of jeans at a bus stop.

These are very expensive jeans, $150 plus if they are real, and according to this video, they probably are. However, on eBay, they seem to be going for about $20-$30 used. Still, that’s more than Chuck pays for a new pair of jeans at Costco.

We collect pop tabs from the cans we pick up and our jar is full again.

Why collect them, you ask? A neighbor of ours has some family members in North Dakota who collect pop tabs for charities, so we started collecting them. About every six months, we empty the jar, weigh and bag the tabs. This batch weighed about 1.47 pounds which is about 1860 pop tabs.

We don’t count the tabs, we have a life, after all. However, we found someone on the Internet who determined that there are 1267 pop tabs per pound. Since 2018 when we started saving them, we have collected 8.3 pounds which equates to about 10,500 tabs, meaning discarded cans we picked up. According to this article, “Ronald McDonald House” receives forty or fifty cents per pound for pop tabs that amounts to $6000 per year. Really a pittance to what McDonalds donates to the program, but every pop tab helps. We don’t know where our pop tabs are being donated, but our 10,500 tabs have generated about $4 of charity. We can handle that. Except for those damned Red Bull cans that fight to hang onto their tabs.

Okay, today was still a bit warm for walking, but we are not complaining. We did remove another small bird from the road but found some money.

A quarter, not bad.

This was sad. Someone kicked the bucket near the freeway.

We took it to the bus stop and managed to fit it into the trash container.

We had to tear and fold the bucket up because the Metro placed some straps over the opening to keep people from throwing in things like buckets. 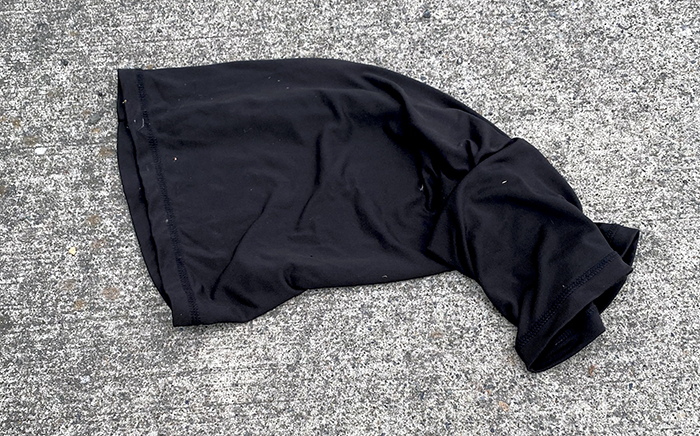 Another neck gaiter. This one was black with no pattern on it. No wonder someone tossed it.

We found a small heart in the gutter, possibly sterling silver.

It measures about one and one-half inches across and looks like it was once a necklace. We thought about looking for the chain, but our hearts weren’t in it.

“Cascade of Cash” as in a cascade of five-dollar bills falling into the Washington State Treasury.

Someone made a pretty good copy of the NASA “Meatball” logo. 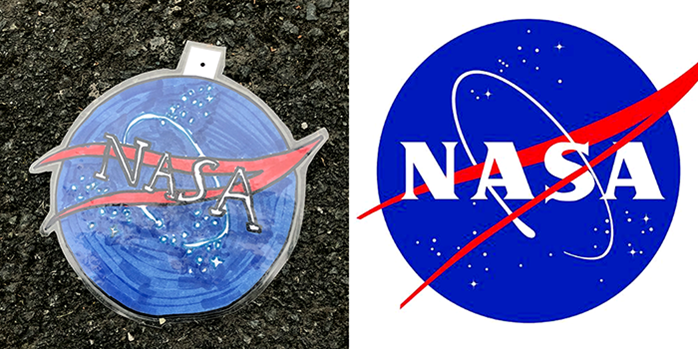 The logo is public domain, but its use must meet the NASA guidelines. We are not sure NASA would approve.

Someone ran over a construction pylon destroying the light. 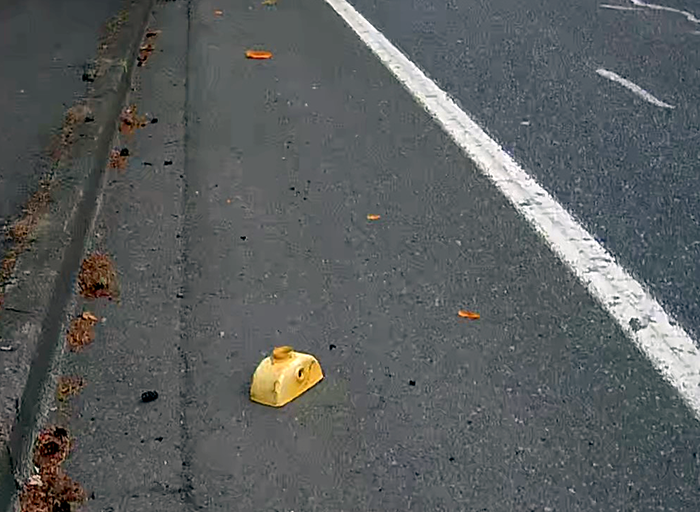 We also found the batteries on the street.

We took them home for proper disposal. THEN we read the fine-print warnings. And we carried these ticking time bombs home!???

The McLitterers made their presence known! 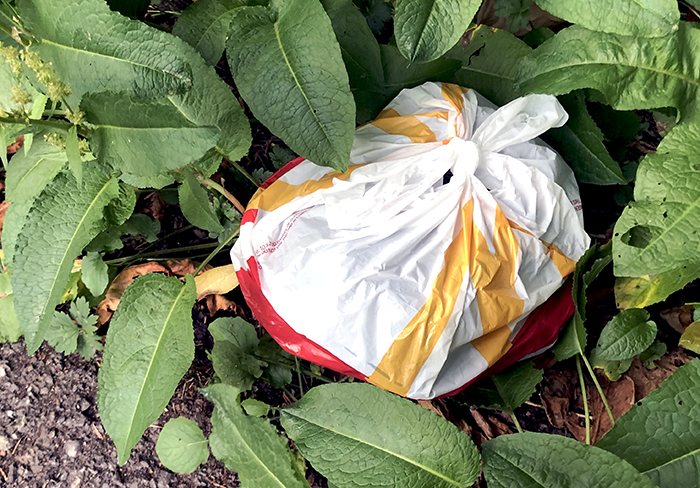 We found two McCafe beverage cups used for tea which is a good sign that the McLitterers were here. Then, about a half-mile farther, the bag. This one was slightly different. The bag contained the usual used teabags and two clean platters, but the unused condiments and utensils were missing. Maybe McDonalds has wised up to them. 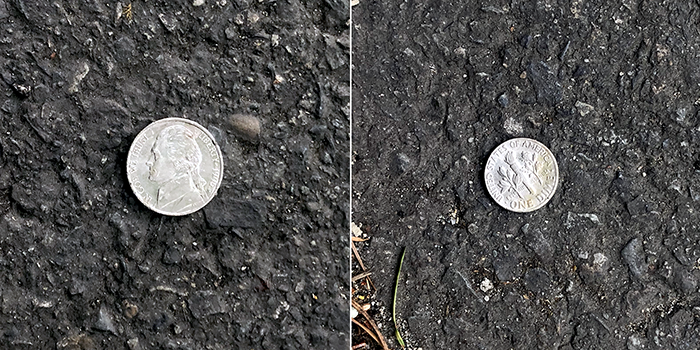 A nickel and a dime within about twenty feet apart.

Someone tossed an unopened bottle of water. 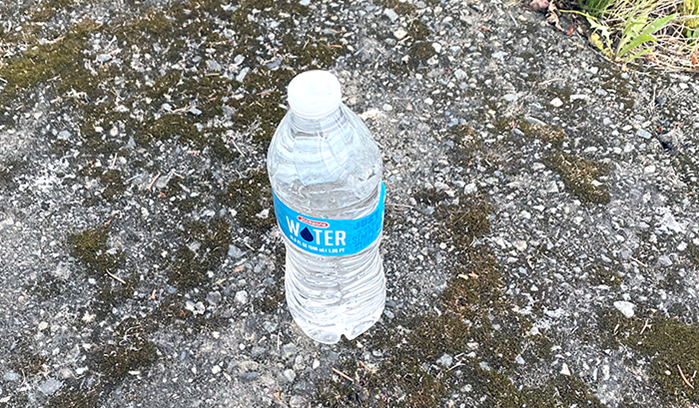 The fools. There is more hot weather coming.

Another lug nut to add to our collection. 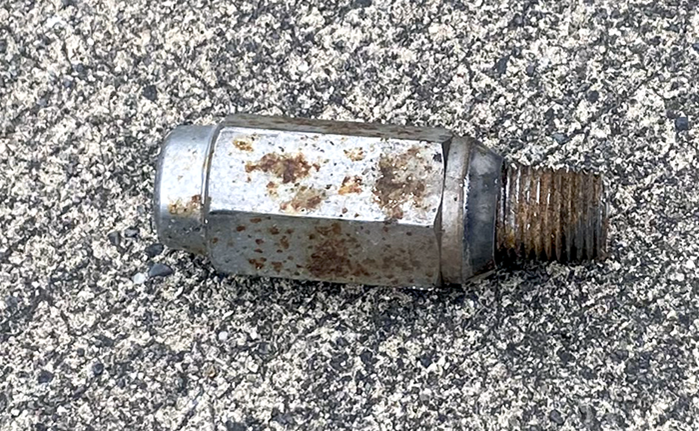 Missing lug nuts can be a problem.

At this year’s Indy 500, racer Rahal lost a rear wheel due to a loose lug nut. The result can be seen here.

“Flum Float.” It turned out to be another discardable vaping device. Just what the world needs.

We found more stolen mail on our way down Norway Hill.

It was all junk mail, so we recycled it. If it is important, we will deliver it to the address or take it to the post office. 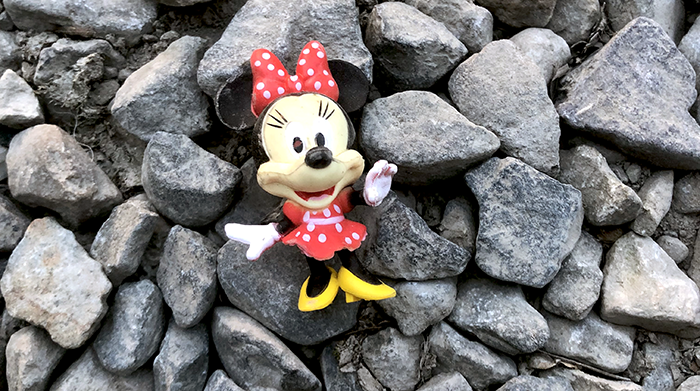 As we said, today was very warm and someone was thoughtful enough to leave us an umbrella.

Okay, thank you, but it is kind of heavy to carry. We left it

On the freeway onramp, we found a tool.

On Thursday when we crossed the freeway, we looked down and saw a very visible piece of debris. We decided to pick it up on our offramp trip by crossing the mound between the freeway offramp and the freeway.

It was a popped aluminum balloon. We rolled it up and dumped it at the bus stop trash. It wasn’t a big deal, but this was adding onto our normal route, and we are pretty much stretched to our limits on Saturday.

Somebody dropped the ball.

Four of them, actually. A tennis ball in the gutter, baseball and well-chewed ball near each other, and a golf ball at the park-and-ride. The chewed ball went into the garbage. The others went into our now well-organized ball collection.

Whoa! Another McLitterer bag, two days in a week.

That was the complete deal with unopened condiments. McDonalds should add a McLitter Meal to their menu like their Happy Meals. Instead of condiments, they could add a surprise prize inside like a cigarette butt or a beer can.