Well, okay. The money continues, and not in a small way.

By the 7-Eleven, we found two quarters and a dime, sixty cents. Then, at the tire air supply machine at Safeway, we found a total of eleven pennies. We can imagine the guy saying, “Damn, another bad penny as he tries to use pennies in a quarters-only air vending machine. Then, a big first. The one and only two-dollar bill we have ever found. What a great start to the week. Not like the crappy, literally, end of last week.

We picked up several nails by the 7-Eleven where some construction is underway.

These were the double-headed nails that make it easier to pull them out of your car tire.

Someone lost a jacket. 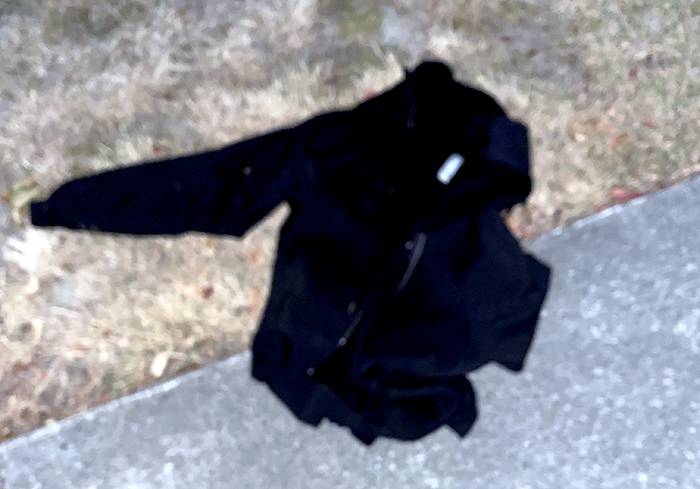 It was blurry. If it had been sharp, we would have carried it home for Goodwill, but we left it hanging on a nearby sign so the owner might see it. He will need to squint, though.

Now, this is sharp.

We did not take this photo on our walk, but later in the day. Not bad for a cell phone picture.

We picked up an Apple AirPods case/charger.

There were no ear buds, though. Useless.

We found a seashell near the top of Norway Hill.

This is definitive evidence that the ocean once covered the hill.

We have been remiss in delivering our Moth Trap Reports.

Today, we counted three flies in the moth trap, but no moths. They need to clean the flies out of the trap. Imagine the moths stopping in to spend the night. “Let’s not stay here, there are flies all over the floor.” What are moth pelts worth anyway?

We did get a five-star rating on our walk today.

The week is off to a great start.

We did not go for a walk today because of a 7:00 am doctor’s appointment. Later, we visited our grandchild in Seattle, and of course our son and daughter-in-law. We went for a short walk to a nearby Mexican restaurant for lunch.

We saw a lot of trash that we were not prepared to pick up. We saw a couch someone left for free.

Then there was a gruesome scene of violence.

A plum stabbed in the heart with a golf tee.  Guess Professor Plum did not kill Mrs. White with the rope in the conservatory.

But it was all worth it. We were able to spend some quality time with our grandson.

And his parents, of course.

We found no money today. We know, disappointing given our start on Monday. And we needed to remove a roadkill snake to boot.

We found a lot of random trash, but the theme seemed to be mystery food. First, we came across some invisible peaches for sale.

We had a hard time deciding which to get, but we ended up buying three. Two for a dollar and one for fifty cents. We used the invisible money we found on our walk today.

At a bus stop, we found an unlabeled can. 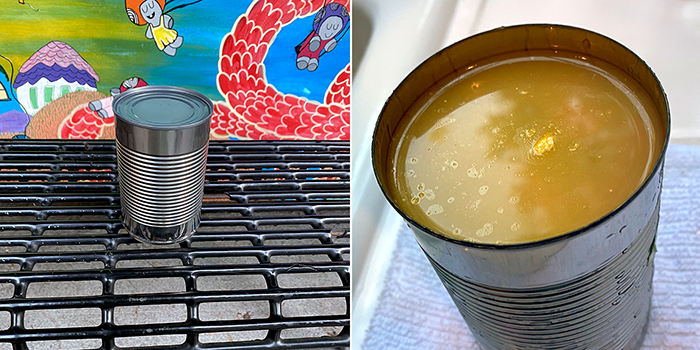 There was some discussion about leaving it in the bus stop trash can or carrying it home to see what it was. Janet won out, so Chuck carried the can back home. It turned out to be chicken noodle soup. Not knowing the history, we dumped it into our organic waste can since it was probably organic soup, anyway.

Finally, our last mystery was a plastic bag of something.

At first, we thought it was mac-and-cheese, but on further inspection, it wasn’t. It went into our organic waste can without being identified. Not because of lack of curiosity, but from lack of bravery, especially after Janet suggested it could be intestines. Okay, for you masochists, here is close-up.

And, no, we do not want the answer.

Today was warm at 65°F (18.3°C) and got warmer as we walked. We are grooming a new road on our Thursday walk which caused us to take about forty-five minutes more than usual.

These folks take no pride in their neighborhood. Part of it is from an abandoned homeless camp on the other side of the fence that we are considering addressing.

We did remove what appears to be a very flat (unidentifiable) cat from the road, but did find more money. 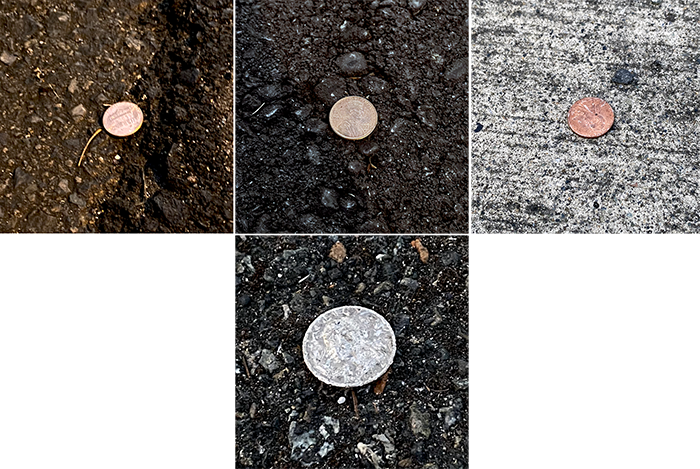 Twenty-eight cents, a quarter and three pennies, all separate. The quarter was pretty beat up, but George is still recognizable.

As we left our house, we saw that one of our neighbors left a washing machine by the side of the road, and we were very disappointed. No “Free” sign.

However, our trash company offers a service to pick up old appliances and we heard them picking it up later in the day to be recycled. Faith restored.

Okay, this is ridiculous.

At the intersection of 112th Ave. NE and Juanita-Woodinville Way NE, we counted a total of fifteen signs. Some were campaign signs, and they have another week or so to remove them. Five were “SEALCOATING” signs which, to us indicates a sign (pun intended) of a possible scam. Anyway, these are annoying because they will be left to rot in place until we end up picking them up.

We found a lost leash in the middle of the street. 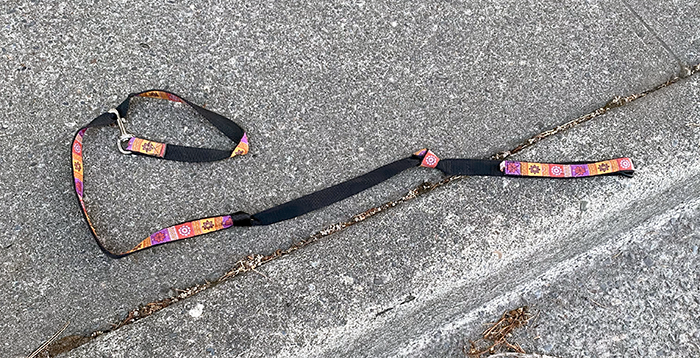 We took it to the Hop and Hound, our favorite beer hangout. We do not have a dog, so we go there to get our dog fix. We have provided them with several dog-related finds and they find good homes for them.

We saw some coffee grounds on the sidewalk. 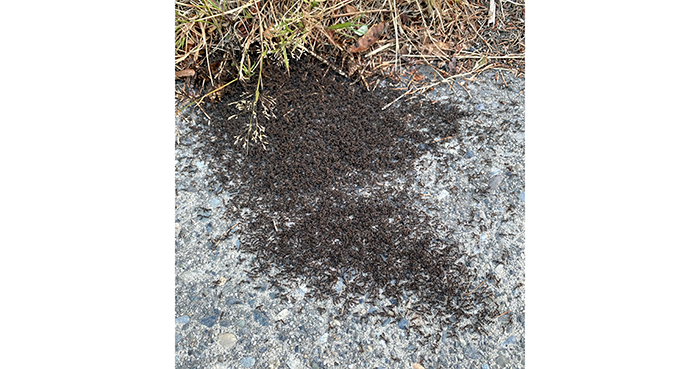 But it turned out to be the Woodstock of Ants. We listened very closely but couldn’t hear the band. Perhaps someone spilled their stash of LSD? Okay, we were joking, but here is a study. “With large groups of ants, multiple feedings with LSD always impaired the behavior of foraging workers, whereas domestic workers performed normally.” We get that: Forager, “We can carry that watermelon back to the nest, let’s go!” Domestic workers, “Hey, bro, what’s up? Got some good stuff?”

Near the ants, we found a unicorn.

We should have dropped it into the ant festival. It would have been accepted.

The park-and-ride was prolific. An almost-full pack of cigarettes.

We will add it to our collection of unsmoked cigarettes. They are fifty cents apiece, for goodness sakes.

A full, unopened bottle of water.

Opened and dumped on the dry grass.

And Janet found some lost sunglasses. 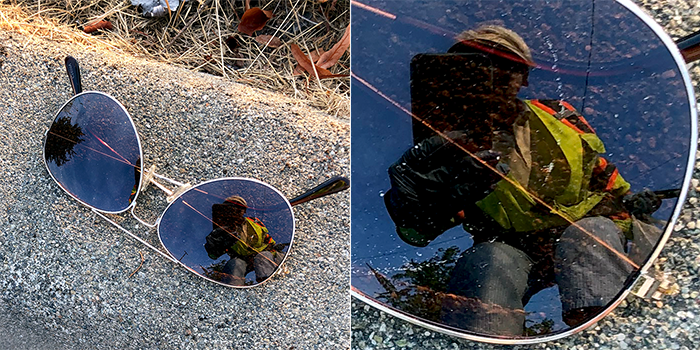 She took a gratuitous selfie. Do not humor her.

It produced a red sunrise.

We removed a roadkill squirrel today and found a quarter wrapper.

We were hoping that it had been run over and spilled its quarters for us, but no luck. However, we did find some money.

We found a nickel and penny together near Safeway and separately two quarters and another penny along NE 145th Street for a total of fifty-seven cents. Not bad. A ten-dollar roll of quarters would have been better, though.

We also found a tool.

You guessed it, yet another socket. There are a few discussions on the Internet regarding the most lost tools. Screw drivers and tape measures are a popular choice, but sockets, and particularly 10mm sockets are right up there. We have found several tape measures and screw drivers, but sockets are king. Evidently, we also need to pay attention to the size. And yes, today’s socket was a 10mm.

It is a “Petlou Christmas Flamingo Dog Toy.” Shouldn’t there be dog flamingo toys for folks with pet flamingos? Probably not, according to one article, flamingos are very high maintenance and will probably not play fetch with you anyway. But if they did, we found a colorful ball you could use.

But no, they would just stand around on one leg and ignore the ball, waiting to be preened.

For some reason, someone had a bush removed a couple of months ago. We have since been picking up bits and pieces of trash that have surfaced. 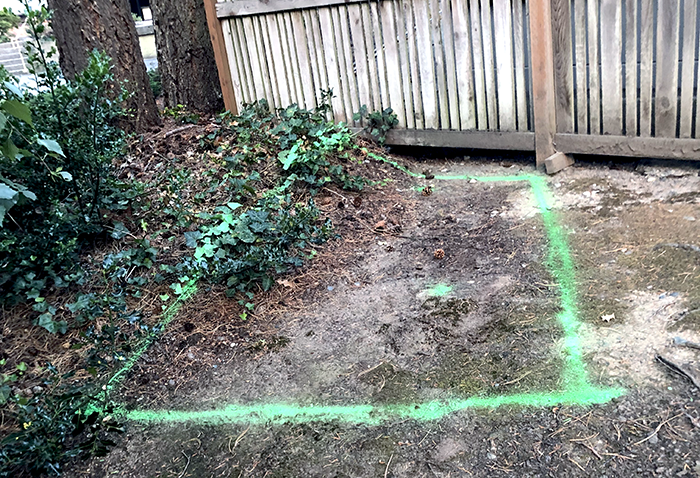 Today, there were fresh markings on the ground. We are not sure what this is all about, but we’ll keep an eye on it.

Now this is what we’re talking about. Schools need to get back to teaching the basics.

And you can’t get much more basic than this.

“I’m sorry. Very very sorry and I will not be a dunce ever again. – Me.” This person must be very young. Life is long and opportunities are plentiful. We speak from experience; you will be a dunce again.

It was slightly cooler today, but still warm. We found more money. 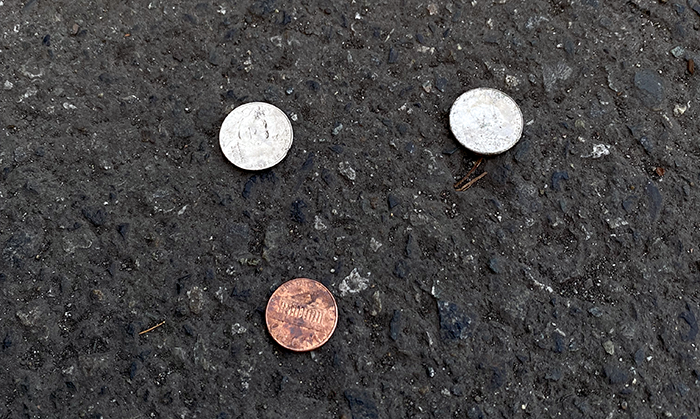 Two nickels and a penny for eleven cents. That makes a total of three dollars and sixty-seven cents this week. It doesn’t sound like much, but it’s tax free.

The quick and the dead. 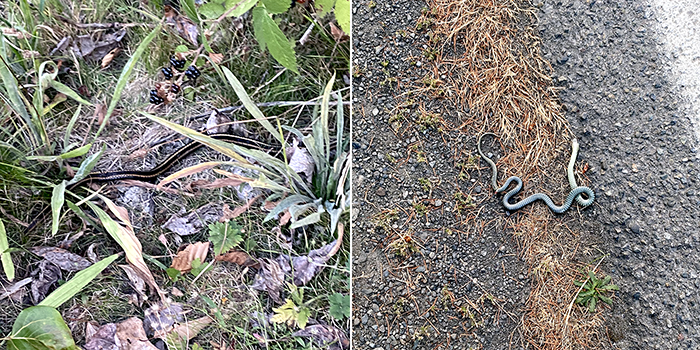 Along Riverside Drive, we spotted a garter snake slithering through the grass. We tried to get a good photo of it, but it was obviously camera-shy and kept moving. A few blocks later, we found another that wasn’t moving at all. We removed it from the road.

At the Sammamish River parking lot, someone dropped a pacifier/teether.

Ten bucks at the Ulubulu site. It sure doesn’t look like ten dollars-worth to us.

Unlike a lot of freebies we see, this house has put out several items in the past few months and they always seem to get taken away. It’s because they are not putting out dirty, broken junk that just needs to be taken to the dump.

Near the gun club on Woodinville Drive, we picked up an empty cartridge box and a used target.

We hope they used these items inside the gun club. The box held twenty rounds and we counted eleven hits on the target. Nine misses? Not very good shooting.

We found some clothing today including a hat.

After some Googling, we found that this is a Mexican baseball team, Cañeros de Los Mochis (Los Mochis Sugar Cane Growers) located in Los Mochis, Mexico, 2000 miles away. We probably won’t be returning it any time soon.

An Appian Construction tee shirt, a woman’s wrap, and one and a half pairs of shoes. They all went into a nearby clothing collection bin.

On our way up Brickyard Road, we saw what looked like stolen mail.

But as we picked the mess up, it was probably just random trash and may have been lost by a garbage truck.

Also on Brickyard, we found another piece of the measuring spoons from last Saturday.

We are still missing the “Trust” spoon, though.

Behind some bushes at the freeway offramp, we found a panhandler’s stash of cue cards. 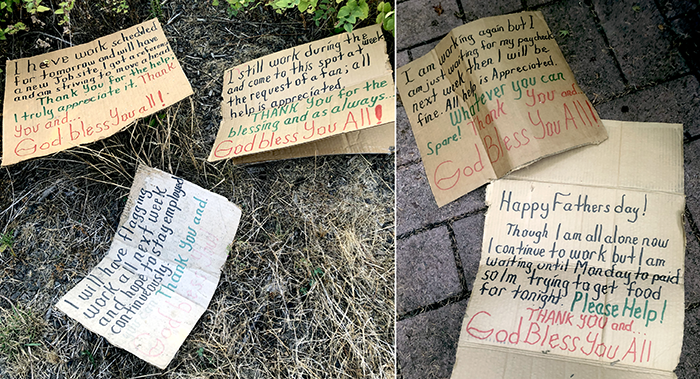 Are you seeing a pattern here? This is also where we have found unopened food and toiletries people have provided.  This guy needs to add more stories to his act.