We started a new week on Monday. No, wait. On Sunday. We found a quarter. 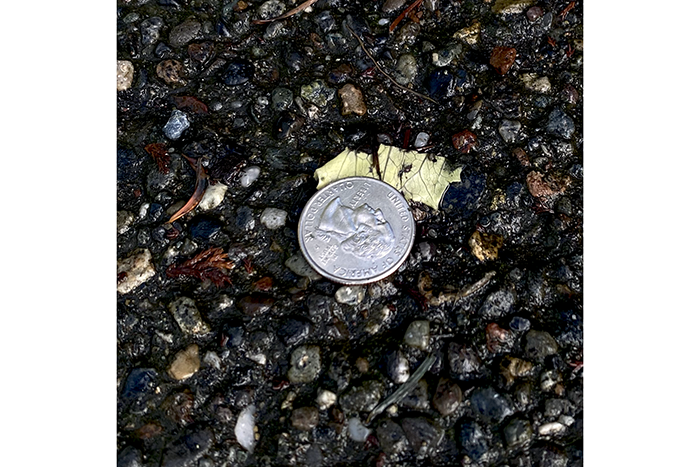 It was not on an official walk, but we were walking, we picked up some trash and we were together. If we were not walking together, Janet would have claimed it for her piggy bank. A nice way to start the week.

The weather was cool in the upper thirties with light rain that gradually stopped. We found a very nice Yeti cup.

It was totally unscathed and had a little lukewarm coffee in it. The jury is still out whether it goes to Goodwill. Our job does have its perks.

Near the Safeway parking lot, another Master lock.

This one was a model 6121 and sounded very impressive. That is, until we found several YouTube videos showing how easy it is to pick.

So, we are keeping it because, even though we don’t have any key, it turns out you don’t need one. Perfect.

Yep, another socket. And it was not even a valued 10mm, it was a common 7/16th inch socket. Nothing to write about unless you have little else to write about.

And speaking of little else.

The weather this morning was much like yesterday, cold and dry. We removed a small bird from the road and found a little money. 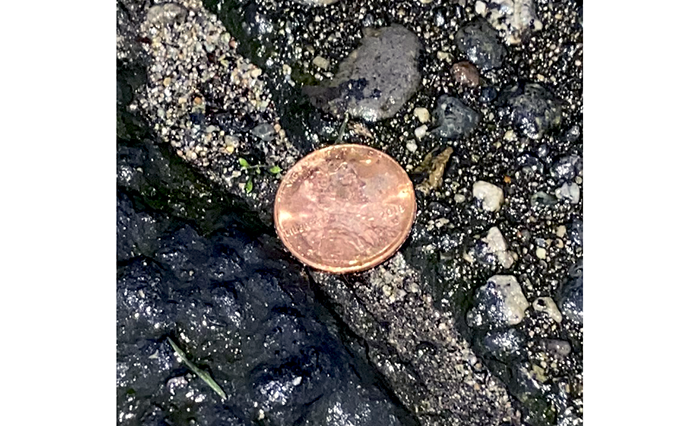 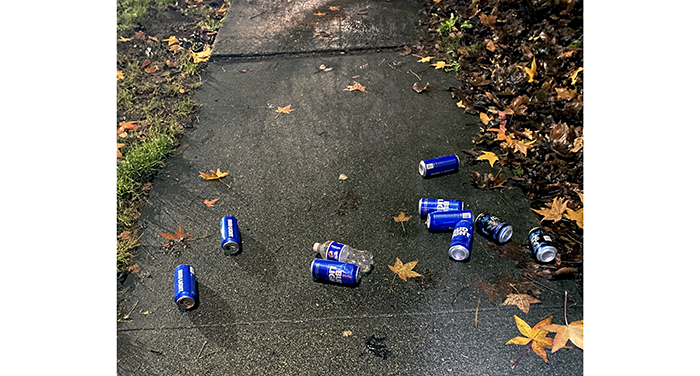 Nine beer cans and one water bottle. This is a good lesson. When drinking large quantities, be sure to keep hydrated.

We found an almost-full pack of cigarettes.

They were soggy from the rain, no wonder the smoker tossed them. How could he light one?

We found a half-full bottle of Magnesium Lotion.

The labelling indicates it is highly concentrated and vanilla scented. We have not heard of this before, so we needed to check it out. According to HealthLine, magnesium is a nutrient that has many good functions in the body including,

This sounds good. We should probably use it after our walks.

Today it was cool and wet. We got rained on for most of the walk.

The newest section of our walk along 116th NE is turning out to produce new trash each week, and not just beer cans and bottles. Today we picked up a large marijuana pipe that someone discarded.

At least we assume they discarded it on purpose. There is that thing about marijuana and its effect on memory. Maybe they forgot it. It was dirty but otherwise in good condition.

A little farther down the road, more drug evidence.

A hypodermic needle. We pressed the plunger in, and a little milky liquid squirted out. Fortunately, we had just found a beer can and was able to slip it in and bend the pop tab so it wouldn’t slip out. Later we put it on our sharps container which is about a third full now.

Someone lost their mouthguard.

We have seen these decorated with teeth, presumably to strike fear in your opponents. So, what do rhinestones convey?

We seem to be finding a lot of locks lately. 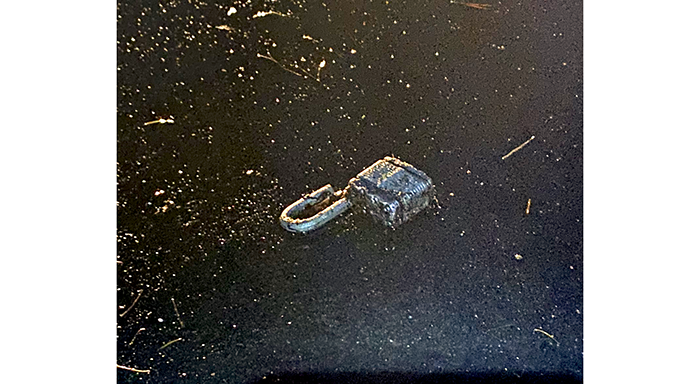 The security kind, not the hair kind. This one had been badly beat up by the traffic and got recycled. No key, anyway.

This is just great. At the park-and-ride, someone left us an unopened bottle of water.

We’ve been walking in the rain for two hours and they give us water.

This morning was another cool walk at 35°F (1.7°C), but it was dry. Big difference. We picked up the normal amount of usual trash, but little to write about. We did have a nice surprise, though. The 7-Eleven parking lot had been swept!

It is hard to see, but the image on the left was last week and the one on the right was today. The whole lot was a mess, but we have been cleaning up this driveway which had a pile of leaves and branches which litterers added their trash to. Now we can easily see the trash. And, yes, we picked up the cup. 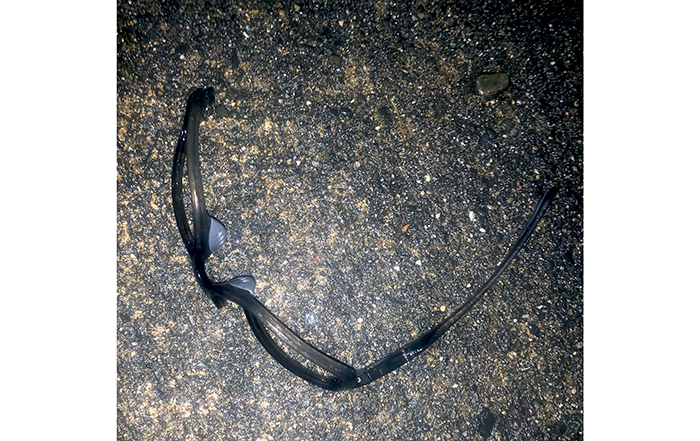 You shouldn’t have tossed your sunglasses away. The sun might come back. Someday.

It’s time to check what Chuck has in his vest pocket this week.

A Biden Gas Pump sticker near the Safeway gas station. A Hilton hotel room key card. Wonder if you take it to the counter and tell them you are in room 406 and your key card won’t work, will they recode it for you? They’d probably inform you the hotel only has three floors. Two sunglasses’ lenses. Wait. The frames we found… dang, we recycled them.

We were very uncomfortable today. The temperature was 38°F (3.3°C), warmer than yesterday, but it rained the entire eight-mile, four-hour walk. We wore warm clothes and rain jackets, but our legs and feet were soaked. And we found no money. Our total take this week was twenty-six cents, about half of last week.

But we did find a Washington State scratch-and-lose card, but it was already scratched and lost.

On Riverside Drive, on our way toward Bothell, we found two rings and a third on our way back.

The two shown here are colored silver and bronze. The third one is a darker grey. Google thinks they are ladies’ rings, but they are about two inches in diameter. They are polished with rounded edges, so they appear to be jewelry, but they have no markings. It’s a mystery.

It contained twelve, five-minute stories, ideal for those with ADHD. It also contained a lot of water so was deposited in a nearby recycle bin.

We found a flying saucer below the freeway.

A vehicle on the freeway lost a hubcap and sailed it over the guard rail onto Riverside Drive. Too bad we weren’t there when it happened. We could report a UFO, the Seattle Times would surely cover it. It was in rough condition and ended up in a nearby recycle bin.

More McDonalds fries across from the apartments on Woodinville Drive.

McDonalds fries are good when they are warm, but terrible when they are cold. Even the birds won’t eat them, and, well, they are birdbrains.

We walk down Woodinville Drive on the opposite side of the apartments. When we reach the city limits, we consolidate our trash and start back. We walk into the apartment complex to their dumpster to unload our trash. Today, after we unloaded, we continued toward Brickyard Road then saw this mess.

More uneaten food, mostly. They ate half the banana and half the apple. Other than those, everything else was sealed except for a few items that burst on impact. We bagged the groceries and considered carrying them up Brickyard Road hill, then thought better of it. We backtracked about two blocks and made a second trip into the apartment complex. What is with all the dumping of unopened food. Besides this, in the last two weeks, we found,

That’s about $275 worth of food. And yes, we checked with the judges. We cannot count these as money finds.

At the park-and-ride, we found a pair of safety glasses.

They look broken, but they were just wet. These were not the ordinary, throw-away safety glasses we normally find. These were prescription safety glasses. We’ll keep an eye on the local social media to see if anyone reports them missing.

Also, at the park-and-ride, two condoms.

Yes, we’ll keep thinking about it.