Okay, we are back on schedule with a mundane Monday. We did not find any money, contributing to the mundaneness, and needed to remove a roadkill rat from the street.

We found a piece of paper with the name ‘EARL’ printed on it. We thought nothing of it and put it into Chuck’s vest pocket. However, about a mile farther on, we found a run over CD.

The CD was also labelled “EARL.” A coincidence? We think not. Okay, we don’t know where that statement came from, but we seem to remember it from the TV series, “Get Smart.” But that was in the ’60s and ’70s, so who knows? Anyway, we don’t remember Earl back then.

At the top of the Tolt Pipeline, we fished a box out of the bushes. It was heavy but we hauled it home.

Among other things there were eleven glass Corona bottles (still missing seven), a stack of red beer cups and two, colored ping pong balls. It sounds like a Spanish keg party was in progress including beer pong. We don’t understand the Red Robin balloon, though.

Today was a nice walk. We are nearing Spring and the rabbits are becoming active. We removed three roadkill rabbits today, but we did find some money. 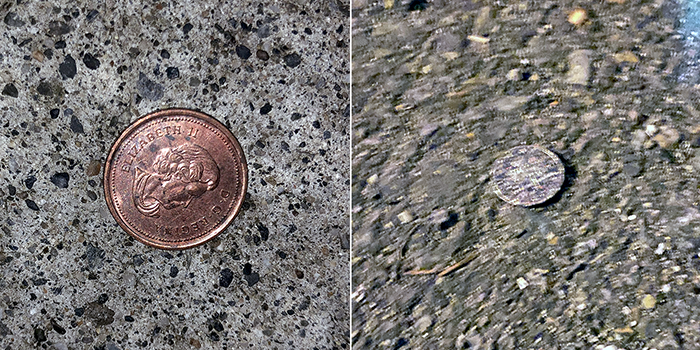 A Canadian penny. The photo was taken with Janet’s older iPhone X with a flash. We also found a dime taken with Chuck’s newer iPhone 11 Pro Max with low-light mode. The low-light mode takes fantastic wide-angle photos, but sucks at close range photos like the dime. We may have figured out how to permanently disable the mode. We’ll see. Anyway, eleven-ish cents today. 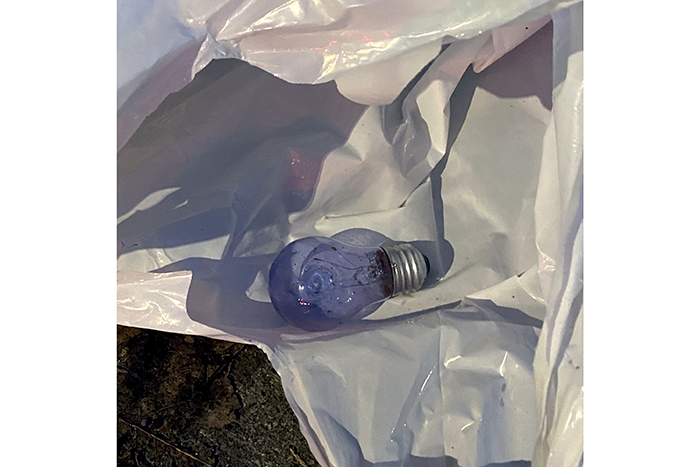 Someone tossed a bag with a single 40-watt light bulb in it. When we got home, we tested it and it is good. Not sure we have a use for it, but it was a good idea.

We have a friend who is very into knives. Today, we found one for him.

Okay, it needs a little work, but he deserves it.

Yesterday at the top of the Tolt Pipeline, we picked up the leavings of the beer-pong party. Today, there was more trash. 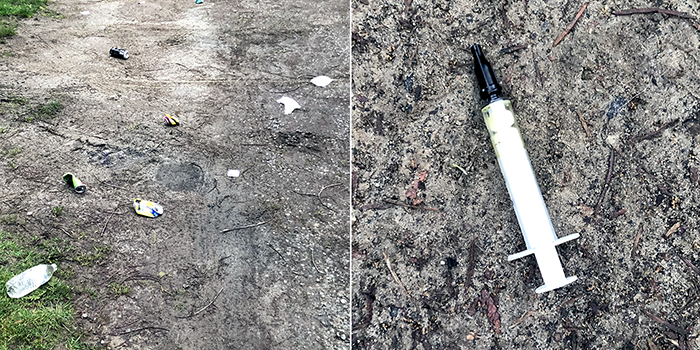 The trash was tossed in the parking area and more in the bushes. There was also a hypodermic device, but it looked more like something to recharge an eCig than shooting up. Of course, one never knows.

Okay, we appreciate folks giving us small tokens of appreciation, but we have our limits.

We picked up a bag with a six-pack carrier and an unopened Blue Moon beer. Blue Moon? Really?

Today started out with rain but quickly cleared up. We removed a roadkill rabbit from the road and picked up the random trash but found little of note.

We did come across a car parked on Norway Hill at the top of the Tolt Pipeline.

We would ordinarily blur the license plate, but we had earlier picked up a carton for a twelve-pack of Bud Lite Selzer, and this car had three of the empty cans outside the driver’s door. There was also someone sleeping in the back seat. We made as much noise as we could crushing the cans, but the guy did not seem to stir.

Hey, go back to Idaho if you are going to litter.

By the way, we think the license plate says “No Turbo.” Of course, it could be “Not Urbo” which would mean not a long-range scooter. Or “Notu Bro,” which could mean “Nation of the Underground Bro,” but neither make sense to us. So, we are stuck with “No Turbo” which does not make sense to us either. But if you see this license plate, know that the driver is a litterer.

Today started out raining, but switched to periods of sun, clouds and sprinkles. Welcome to Washington’s spring. We didn’t find any money and did not remove any roadkill, but we did find some tools. 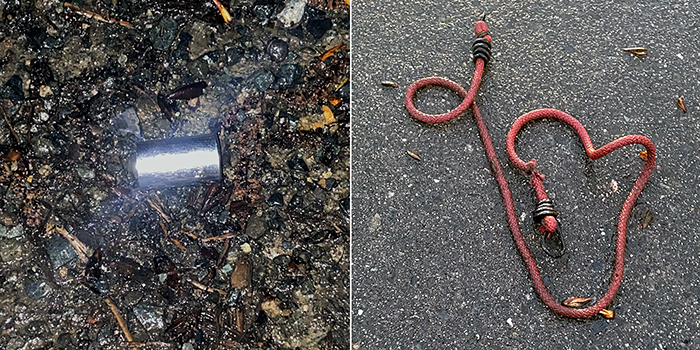 Sort of. The socket on the left was a 5/8th-inch socket in great condition. The bungee cord on the right had lost all its elastic properties and could be used as a rope with hooks, and they were run over. We recycled it.

On Tuesday’s walk, we saw a yellow device blinking, but it was next to a truck with a generator, so we assumed it was part of their project. Today, it was still there, blinking.

We bagged it and checked on it later. It had quit blinking and turned out to be part of a vaping device. What a letdown. It could have been part of a Mars Probe. From them, not from us.

In the ditch along 116th Place NE, we found a half-buried hat.

We will see if it can get cleaned up for Goodwill.

We did find a nice water bottle.

It had some coffee in it, but it will be cleaned and also sent to Goodwill. Perhaps we should approach Goodwill for a cut of their profits? Just an idea.

We picked up yet another lost lug nut.

We should take a count of these. We have certainly found many more of these than loose wheels. We remember the song about loose wheels.

We are pretty sure he is saying “Loose Wheel.”

At the top of the Tolt Pipeline, another mega-mess.

And a tee shirt. We picked up the mess and retrieved the tee shirt from the grass. So, the tee shirt is all about reusing plastic from the Himalayan mountains to be reborn as tee shirts. Then the owner, leaves this mess and this shirt to prove his ecological pledge. Wonderful.

A quick, quiet Friday walk. We saw a few old friends on the walk, didn’t find any roadkill, and found money!

Other than the money, we did not find anything of great interest, but it is Friday, time to check what is in Chuck’s vest pocket.

A bookmark claiming that “Your beautiful and brilliant mind will let you SOAR.” Yes, evidently out the car window and into the ditch.

A card for a registered service animal. A German Shepard named Primo. If you know Primo, let us know and we can return the card. By the way, where does a service animal carry its card?

A small pair if knit booties and clothes pins left over from a congratulatory card from last Saturday.

A plastic roman coin with the inscription, “AVAG CO BEPSIG” that is evidently abbreviated Latin for “These coins are Evil or Fake.” Well, duh! It also states “China.” Guys, it is plastic and made in China.

A “Teach” lapel pin. Not sure what we are supposed to teach. These days, it could be anything.

A snapshot of a creepy-looking guy.

A couple of tags for Pusheen the Cat, obviously once attached to a toy. The tags are made to detach and litter. Okay, we get it. Cat, litter box. Ha, ha.

Then we found some cards for a kids’ travel scavenger game. Let’s see, Sidewalk, no brainer. Power line, well, duh. Flowers, that could be a bit harder. Wait! I spy the police car with the red and blue lights following us. I win!

It rained on our parade today, but this made up for it. 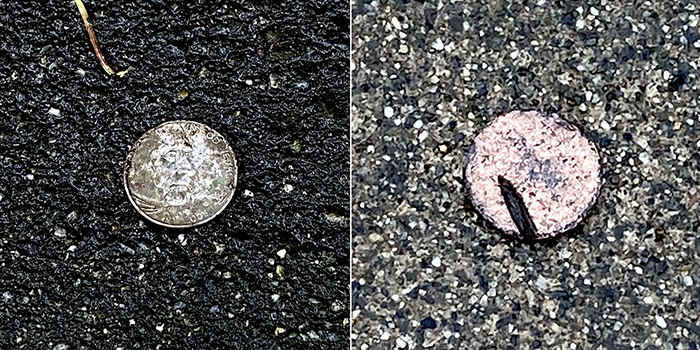 We found a nickel and a penny! The nickel was by the apartments on Woodinville Drive and the penny was near the park-and-ride. We found a few pairs of things today. First, these two coins.

We find a lot of sockets on our walks, and we have found a couple of ratchets, but this is the first ratchet that was in good working order. Also, an almost perfect pair of needle-nose pliers. The very tip of a jaw was broken off, but useable.

Both of these were across from the apartments on Woodinville Drive. Yes, we did find the one on the right last Saturday, but it’s still there, probably because we didn’t report it to the city. We will do that this week.

Okay we get it. The Mask Mandate has been dropped in Washington, but these are not the types of masks we expected to be dropped.

We did come across an unopened bag of popcorn.

Okay, we would have preferred potato chips, but their website lists their ingredients.

Okay, that tells us what it isn’t, what is it? Then they mention,

The main ingredient is Popcorn. So, does the “popcorn” contain butter like real popcorn? And what else does it contain?

We have been seeing a glove in the road during our week’s travels and we finally picked it up today.

It appeared to be a kid’s toy, a rabbit, but it was run over so many times it was hard to tell. After cleaning it up and doing some research, we think it is Stitch.

It is a Disney cartoon character.  It’s a good thing we found this.  Our second guess was a flat bat.

We saw a tissue along the road and picked it up.

With our picker, of course. A bag with multiple used condoms. No, we didn’t open it so we don’t know how many, but we do admire the guys stamina, assuming there was one guy. Sorry, we are overthinking this.

We picked up a shirt.

It was made of a heavy material and was very soiled in more ways than one. We hosed it off in our driveway and will wash it and send it to Goodwill. No, we don’t want to keep it. Goodwill buyers, be ware. 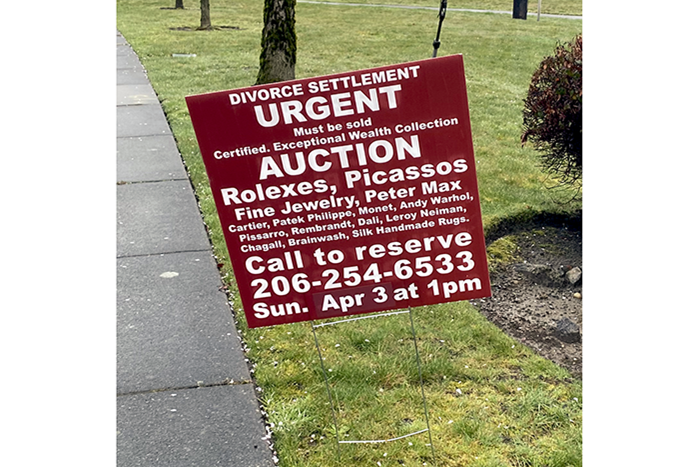 The scammers are back. We have investigated this before. At this point we think anyone gullible enough to fall for this deserves it. Our main issue is that two days before the “URGENT ACUTION,” they spatter the area with signs and leave them. The scam is, they charge to enter the auction. They have minimums on the high-price items (Rolexes, Picassos, etc.) if they are even real.

We keep threatening to purchase some ‘SCAM’ stickers to place on these signs and the “We buy houses for cash” signs. Another story.

Well, that ends the walking week. Our take this week was,