The weather this morning was perfect. No rain and the temperature was an ideal 55°F (13°C.) A bit cool when starting out but very comfortable after we warmed up.

It was about 5:15 am when we left this morning and as we were still in the driveway, something stung Chuck’s arm. It felt like a bee sting, but we didn’t see any insects. We finally decided it was probably something hiding in his vest. Fortunately, other than the initial pain, Chuck does not normally react to insect bites. And no, he did not cry regardless of what Janet might say.

We removed a rat from the road and found money.

An unscathed penny. Hey, don’t make fun of it, we now have a penny to our name. Now if we can only find someone who will sell us a car for a pretty penny. Okay, okay, it took a long time to get there, but we are running out of penny-ante puns.

We found a ring.

It was very thin, and we couldn’t see any inscriptions on it. When we examined it at home, we decided it was probably some plumbing or electrical part, but we may still try to sell it on eBay.

Okay, if you have been following our blog, this is getting old.

We won’t even discuss it.

On Juanita-Woodinville Way, a small tree fell and brought down some wires.

We traced the wires, and they appear to be power lines for a streetlight about 100 feet away at the next intersection. And yes, the streetlight was out. Later we notified the City of Bothell in case they did not know about the issue.

They say you can’t know a person until you fill his shoes.

We put this guy’s shoe on, and we still don’t know who the hell he is.

Then, as we passed the goat farm on Norway hill, one of the baby goats was bleating.

Janet started bleating back making a spectacle of herself. You’ve got to be kidding. [get it?] We have the episode on video, but we won’t post it on YouTube. It would be too embarrassing to the kid.

Another very nice walking day and we found three cents.

The first was very near our house and was probably a plant by a neighbor. We don’t mind, we’ll take any fool’s money, even if he is a cheapskate. Later, on the median at the freeway overpass, two more pennies.

On the other hand, we found some roadkill. A bird, a rabbit, and a mountain beaver.

This is the first mountain beaver we’ve found, and no, it was not the one above. The one we found was much more dead and not picture worthy.

After we reported the wires down, the city immediately jumped into action.

Okay, not fixed, but they at least responded. We continue to be impressed by the City of Bothell.

The other thing of interest we found was a dog toy. 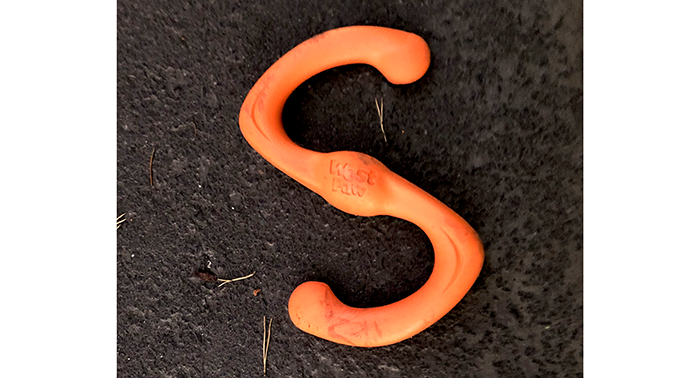 A sixteen-dollar West Paw Tug Toy. With a ball, you toss it as hard as you can then watch the dog wear itself out chasing the ball. We’ve even found balls that bounce irregularly to tire the dog quicker. With this, you play tug-of-war with your dog for hours on end. Who’s going to tire first? It’s no wonder someone tossed it out the window, and good riddance to that sixteen bucks.

No money today and we removed a rare roadkill raccoon from the street. Rare because this is only the nineteenth raccoon we’ve picked up in the last five years. Compare that to over two-hundred-and-fifty rabbits. Not as rare as the mountain beaver, but still rare.

Okay, the construction sign is finally working as intended.

It has been turned off and folded for transport. At least we think it’s turned off. It’s hard to tell with this sign.

Outside the KinderCare, we found a doll tossed over the fence.

Near a facility, we have been picking up trash where employees take their break. This morning we delved farther into the smoking area.

A bunch of butts on the ground, but then pressed into the tree. Really? So, we have read a lot about people who smoke and toss their butts. The excuses range from it’s a habit, they don’t realize they are doing it, to they enjoy tossing it and even, nobody put a receptacle nearby. Again, really? However, this takes it to a whole new level. “I love putting my cigarette butts where it will annoy the most people. Especially the TrashWalkers.” And yes, we cleaned up the tree. Buttholes. Not the tree, the people.

Chuck found part of a destroyed lock and later Janet found a piece of bent iron.

We determined, they belonged together and after some searching, we found it was a locking hitch pin.

Today, again, no money. But evidently the rabbits felt slighted by the mountain beaver and raccoon. We removed three rabbits from our route today. We never knew rabbits were so sacrificing.

School has restarted and has caused an uptick in traffic. Perhaps it is better called an explosion. Here is a comparison from one week ago.

These are photos from the same approximate location within ten minutes in time. There are no schools near here, this is just the general traffic increase. It’s amazing how much the education system impacts the world around us.

But perhaps we are being too critical. Evidently, they are combining anatomy and art classes.

We found a kid’s art/anatomy notes to color by organ, but we never knew the gallbladder was yellow. The kid seemed to get the anus right, though. Hey, we try to be educational in our blog.

Yep, another fork in the road.

It was correctly pointing along the road. It was on the freeway overpass, for goodness sakes. It had no choice.

On the freeway off ramp, a used needle. “Whew, that school traffic was terrible. Its’s good I had a little something to give me a chill.”

We found a Taco Time cup with some congealed substance. We tried to delve deeper into it.

But a small wasp beat us to it. He looked like he was having a great time, but he wasn’t moving very fast. In fact, he was not moving at all. Do not buy drinks at Taco Time or this could be you.

Where we usually find piles of 14-Hands wine, we found only Georgetown Bodhizafa cans.

Okay, perhaps the wine drinker switched to beer. Nine Georgetown Bodhizafa IPA cans. One of our favorites. We are pleased that they picked a great beer but miffed they didn’t invite us.

Together, we found a brush and a garment, we think.

We had some discussions about how one would wear such a garment. The brand was Poster Grl and we went online to try to find an example but were unable to find a match. It has three straps and after more discussion, we determined the top strap goes around the neck and the other two go around the back, but that’s just a guess.

We found another marijuana tube, but this one had something in it.

When we got home and opened it, we found two half-smoked joints and an unsmoked one. We doubt this guy meant to toss it but was probably partaking at the time.

Across from a middle school we found packets of condoms scattered along the sidewalk.

We figure they are giving them to the junior high students. “Well, Zeke, what do you think?” “Worst-tasting bubblegum I’ve had, but it does blow nice big bubbles.”

Today was another nice walking day and, for some reason, we got more honks than usual. Maybe Chuck’s fly was open or something. Anyway, we removed two rats and two birds from the road. The two birds were the same type and in the same location that we removed two the week before last. We found trash all along our walk, but everything of interest was found on 100th Ave NE.

We found some money.

Four more pennies, all along 100th Ave NE. One near Starbucks, one near Safeway, and two at the Dairy Queen which is quickly becoming our cash cow. Wait, that may not be a good choice of words since they also serve hamburgers.

These shades were in pretty good shape. Well, except for the missing earpieces. But still. Never mind, they were recycled.

Finally, we ventured down an embankment that abuts an apartment building and picked up a good amount of trash. But we also found a scarf.

A 2020 Seattle Sounder’s fan scarf. It was in pretty rough shape, but we scarfed it up anyway and will try to resurrect it. We shall see. 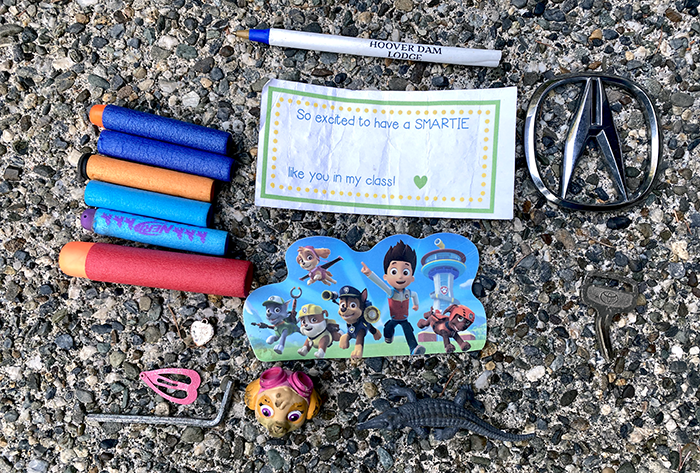 A pen nicked from Hoover Dam Lodge in Boulder City Nevada. We’ll let them know we found it. We’re sure they’re looking for it.

The Nerf turf wars appear to be continuing. And one of the gangs has escalated to magnum Nerf bullets. A small heart locket, a hair clip and a badly bent Allen wrench.

A note from a teacher “So excited to have a Smartie ______ like you in my class!” It has a big space to write in what kind a smartie the kid is. We can think of a few things to enter, and “litterer” is one of them.

Some car parts: an Acura emblem; and a broken Toyota key.

In the middle, a Paw Patrol card with various characters on it. The flying dog is Skye who evidently crashed because we found her head. And the alligator that ate her.

It was relatively warm this morning, and we had a light mist the entire walk which felt good. We found no money and removed a rabbit from the road. But we did find a tool.

One 5/16th inch socket. Okay, not much of a tool, but it beats the bent Allen wrench.

We saved someone from a mega-flat.

Yes, we nailed it. You’re welcome.

We found a full can of beer.

It was in a ditch next to a convenience store. Yes, it is considered beer, we checked with the judges. And no, we do not know why someone would purchase some beer and then toss it.

At the park-and-ride, more trash dumping. 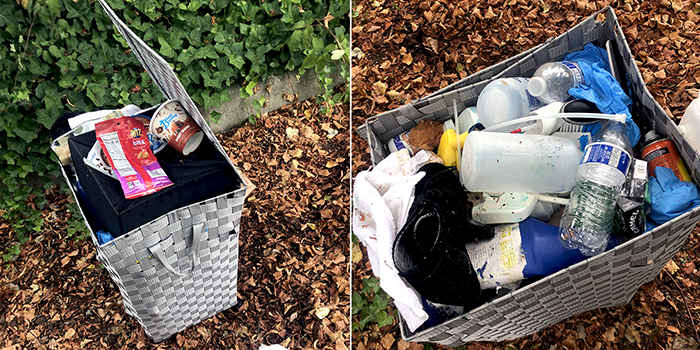 It was too big for us to carry, so went back later with the car. It was mostly cleaning supplies such as carpet cleaner, dish soap, window cleaner and so forth. Several of the bottles were empty. Most ended up being recycled or put in the garbage. The few bottles that were full will be turned in at a county hazardous materials collection event.

That wraps up our walking week. Our take this week:

Have a great week and keep the trash talking down.