Buongiorno!  I returned yesterday afternoon from a week in Taranto, Italy.  The travel was long and each leg of the trip was on a different airline.  This meant at each layover, I needed to retrieve my luggage from baggage claim, check in with the next airline and go back through security.  It was tiresome but gave me something to do during the layovers.

Each morning in Italy I awoke to the same boring scene. 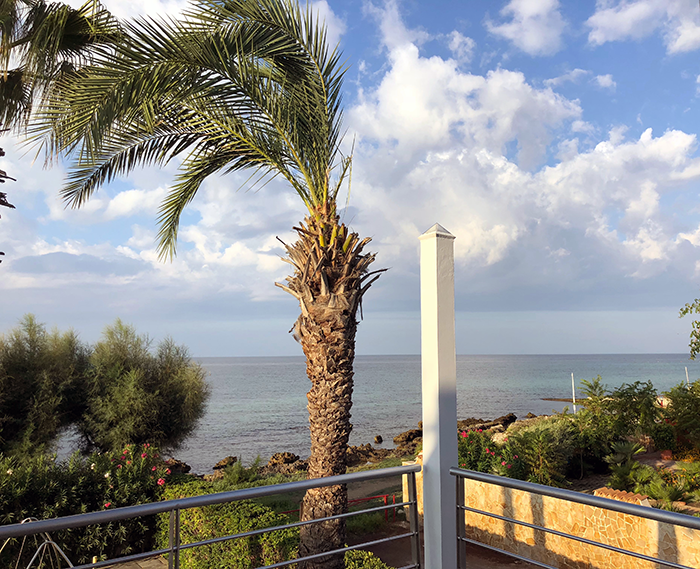 This is the view from the balcony outside my bedroom at the home of Giuseppe and Liliana on the Ionian Sea.

On two mornings I was able to go for short walks along the water and through the neighborhood.

I didn’t have gloves or bags, so didn’t pick up any trash.  However, there was significantly less trash than when I last visited in 2014.

This was my walking path in Taranto according to Garmin.

I saw a cigarette butt in an ant hole. 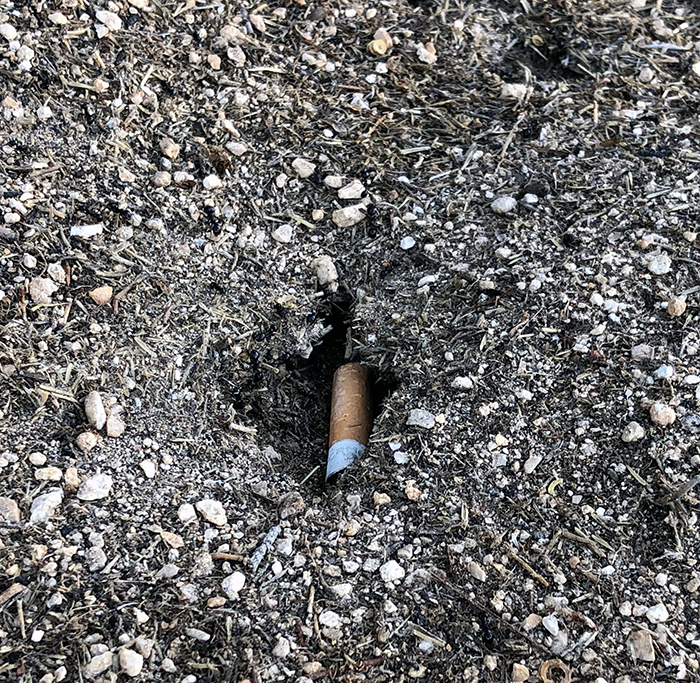 It’s unclear whether the ants pulled it into the hole.  Maybe Italian ants are addicted to smoking?

I saw a couple of trash containers along the water. 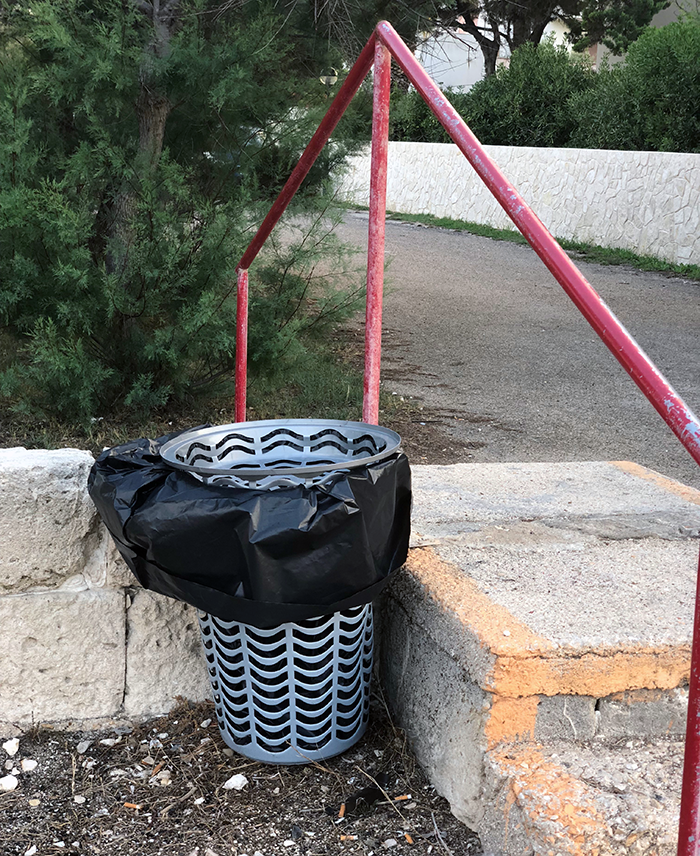 These were definitely not here four years ago.  It’s good to see the neighborhood is interested in keeping the area clean.

Most of the time was spent in the office, but the evening meals were fantastic with good company, food and wine.  The food was mainly fresh seafood since fishing is one of the industries in Taranto.  The strangest dish I had was risotto with squid ink.

It was very good.  We also had a lot of very tasty mussels which are locally harvested in Taranto’s “Little” Sea.

Back to more familiar grounds.  Today was cooler, especially compared to Taranto.  We got a honk from Mr. Handyman and several waves.  We flung an opossum and found three bristles.

As a welcome home, we found another Gatorade-Butt bottle in the ditch. Found yet another unused condom. 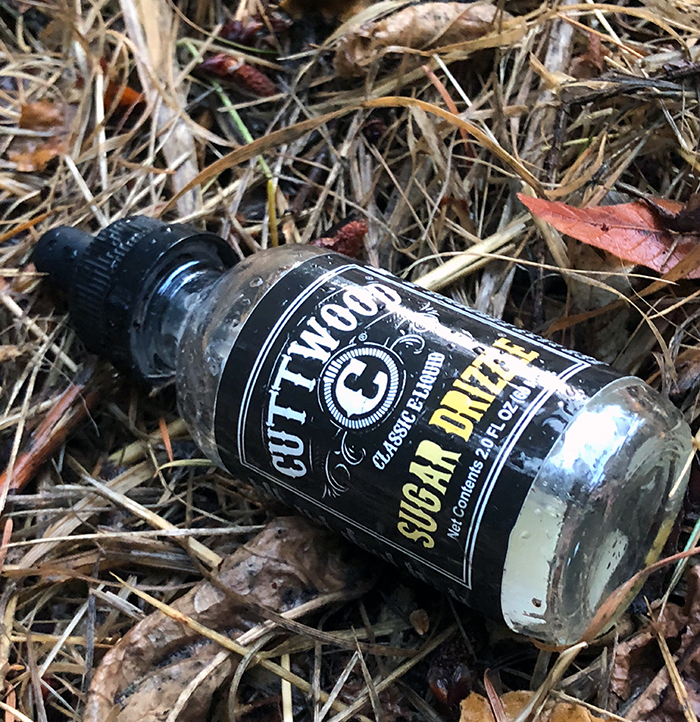 and an empty marijuana jar. 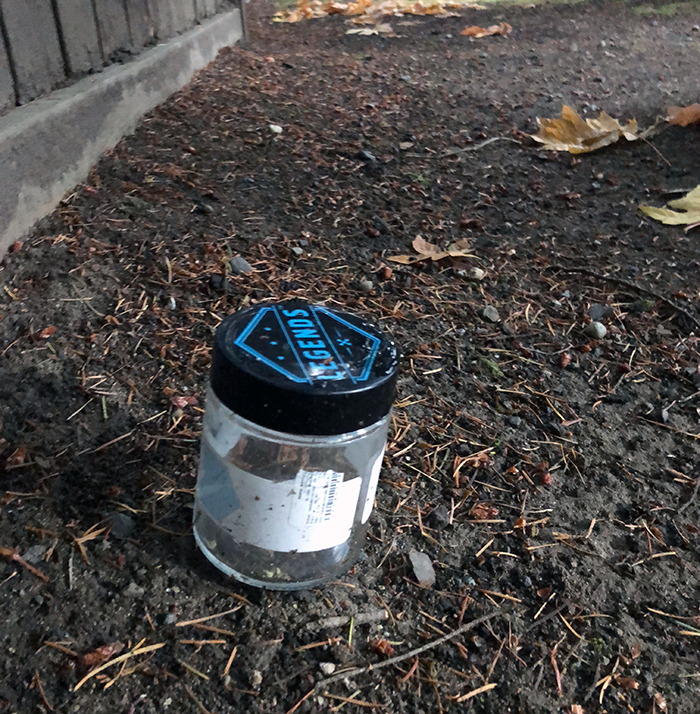 The addiction trash is evolving.  The FDA is not happy. 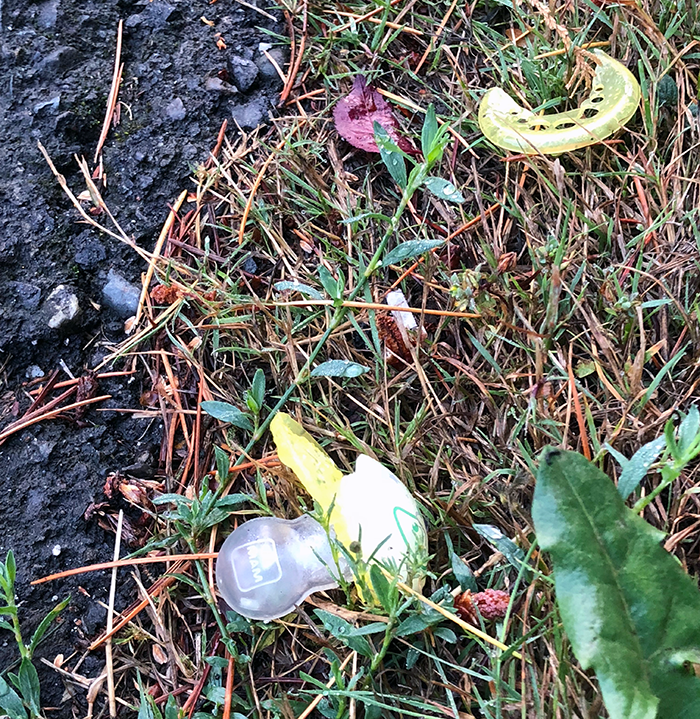 We found a rolled-up poster.

When we unrolled it at home, it was a Seattle Credit Union calendar.  Into the recycle.

Near Safeway, we found a bag with something oozing out of it.

We put it in a Safeway garbage receptacle without further investigation.

Balloons with a deflated ego.

We got a nice thank-you from a neighbor on the hill. 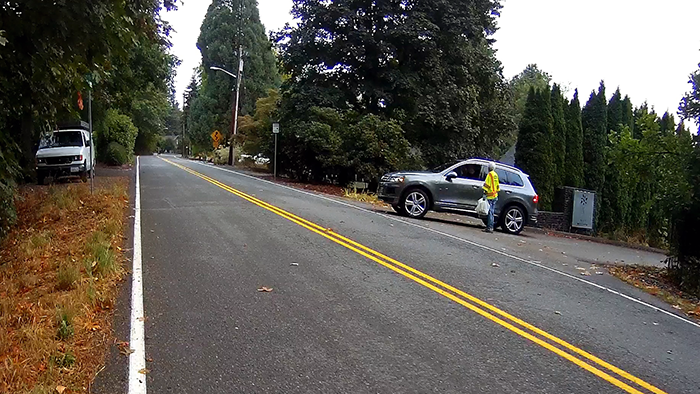 A dislodged road marker that was just installed a couple of weeks ago. 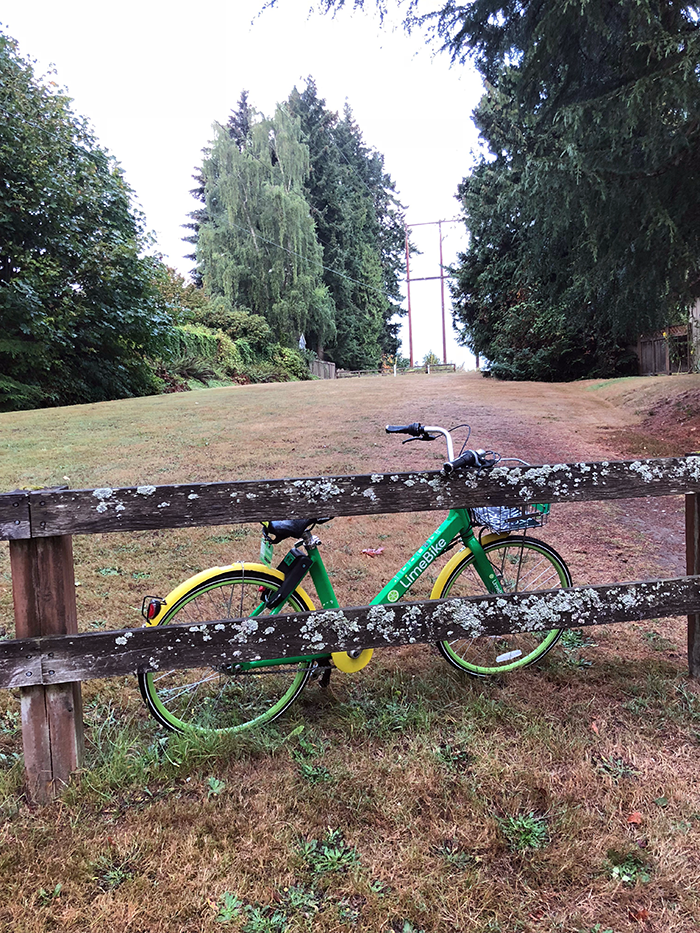 Even though the LimeBike was ignored for a week, it maintained its position at the top of the pipeline.  Twelve weeks as of last Friday.

The weather this morning was unsettled.  We were rained on a few times but not enough to justify rain gear.  We got a honk from Mr. Handyman and waved to Salinas Construction who we have not seen in a while.  We found 5 bristles but little else of note.

We did come across a large car part. 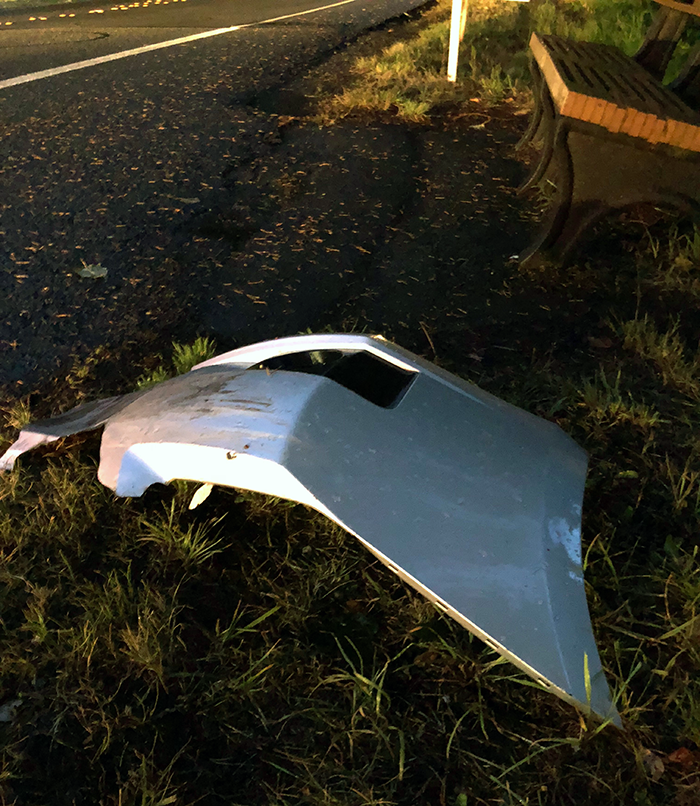 This was left over from a fender bender near the bus stop across from the 7-Eleven.  It was too big to haul, so we left it.  We picked it up with the car later in the day.

While I was in Italy, Janet found a dirty DVD.

It was literally quite dirty.  Janet thought is was too risqué, so I censored it for her.  It must be good since this is the sequel.

We found an eCigarette butt. 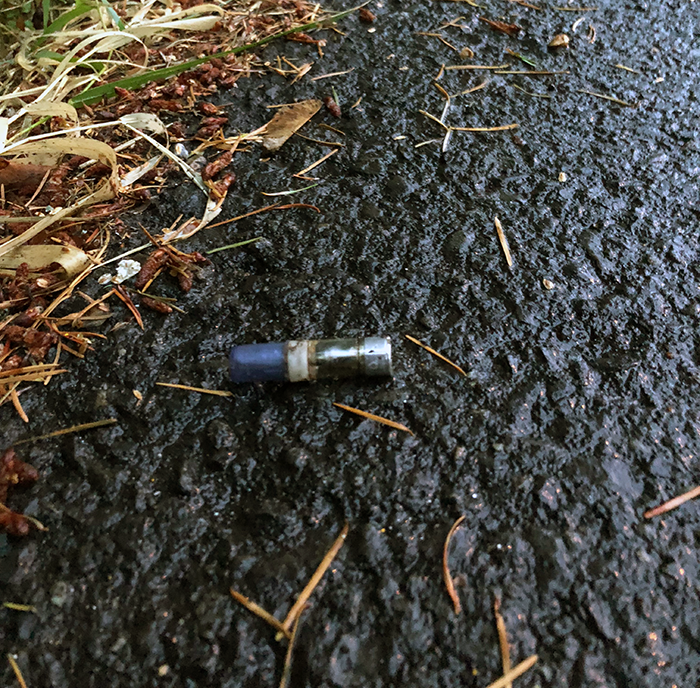 This was another relatively quiet day.  We found three bristles and a tire weight and got an enthusiastic honk from a drive-by honker.

At Juanita KinderCare on Juanita Woodinville Way NE, we keep tossing balls and toys back over the fence. 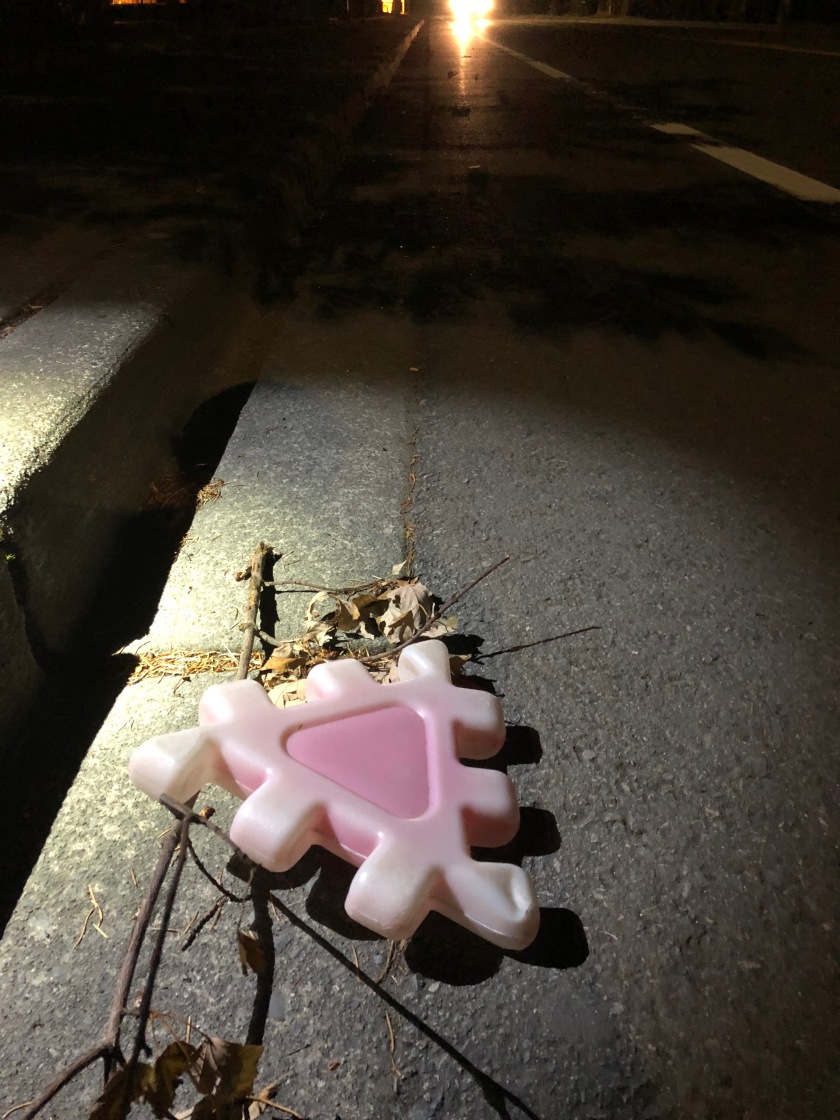 Today it was a piece of the playground equipment. 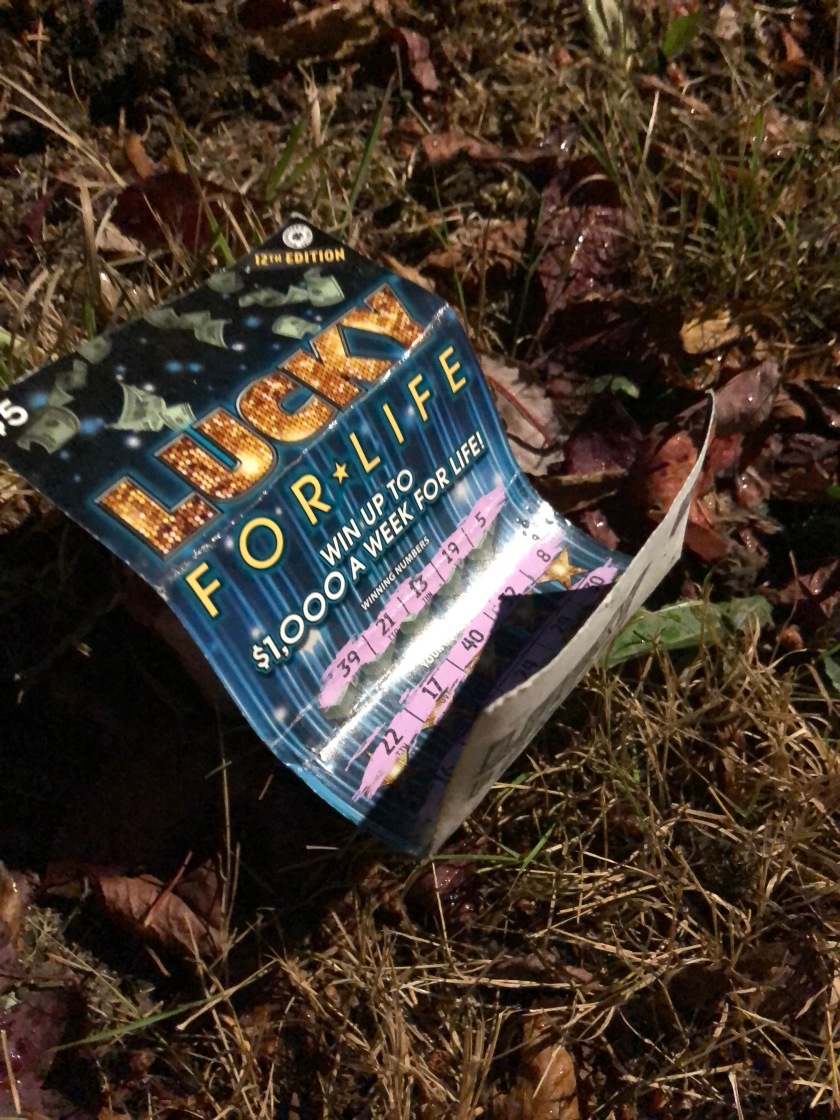 Someone partied at Safeway last night.

What can I say?  It’s a happening place.

We found a large bag buried in the bushes up the hill.  With some effort, we pulled it out and hauled it home.

It measures 3.5′ x 1.5′ x 4.5′.  There is a bigger version of this “Stitch Master” bag used for storing artificial Christmas trees.  I think I saw people with a bag this size at the airports.  At the Frankfurt airport, I was herded into a line for flights to the U.S.  I watched people with huge bags try to check in only to find they were over the weight limit.  They would open the suitcase and pull out random items to reduce the weight, while holding up the line.

We left the house this morning a little before 5:00 am since Janet needed to drive to Vancouver, WA for a meeting.  We flung a rabbit near the apartments across from the Park and Ride.  There was no good place to fling it so I carried it about a hundred feet to some bushes.  We found a bristle and some car parts.

The parts included part of an emblem, but I don’t recognize it.

Someone got some expensive roses. 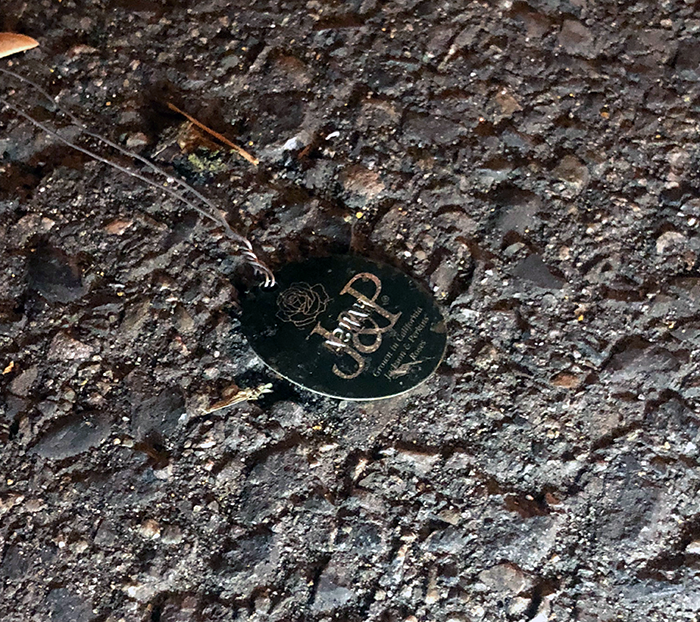 Then dumped the ID tag.

We came across an onion bag, 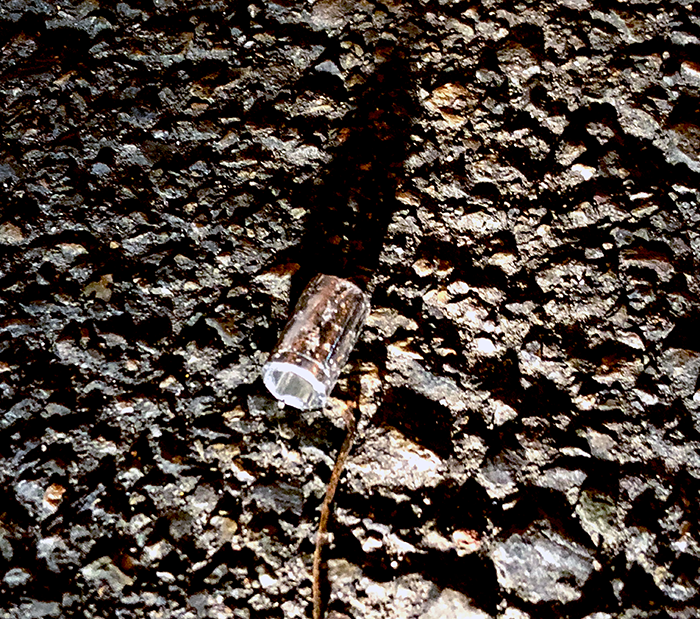 It now resides with our Found Tool collection.

We found a tiny playing card.

The five of Geckos?

I hope the rider wasn’t wearing them when they got busted. 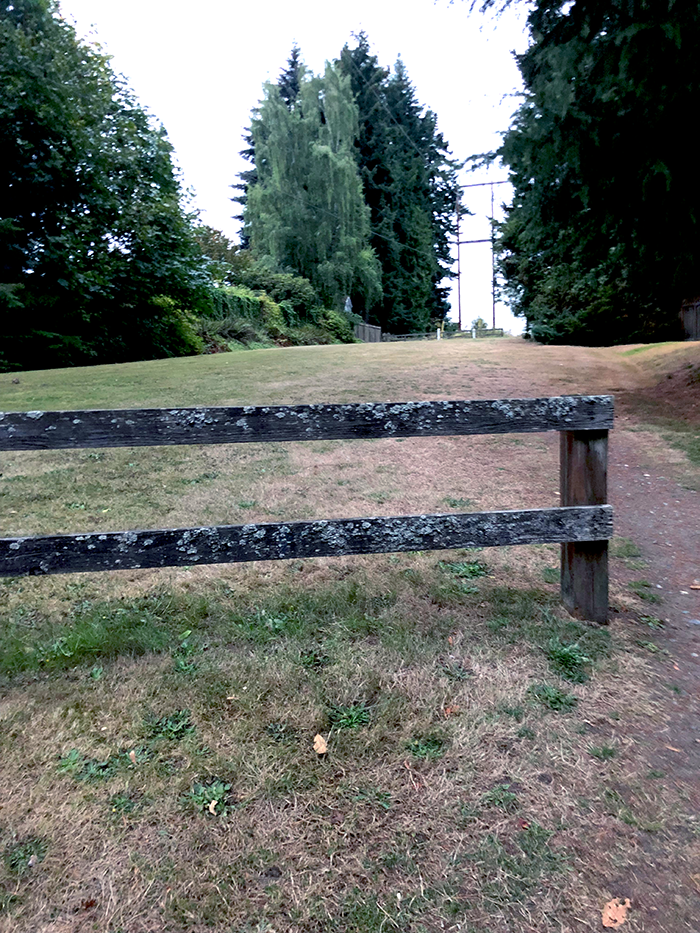 What’s wrong with this picture?  One day shy of 13 weeks, the LimeBike is gone.  I walked to the end of the trail to see if it had been dumped over the edge again, but there was no sign of her.  The end of an era.

Janet is at a meeting in Vancouver, WA so Chuck walked alone.  This is payback for my Italy trip.  The morning started out pleasantly enough.  However, as I approached the turn-around point at the end of Juanita Woodinville Way NE, my weather app, Dark Sky, notified me that rain was starting soon.  It started as a light mist but soon turned into a heavy rain.  Heavy for Seattle, not heavy as in Mississippi or Florida.  I arrived home fully drenched.

I got a very enthusiastic drive-by honk and a honk from Mr. Handyman.  Along 145th I flung a rat ON JANET’S SIDE.  At one point, I stepped into the bushes to retrieve a cup.  I glanced down and saw, 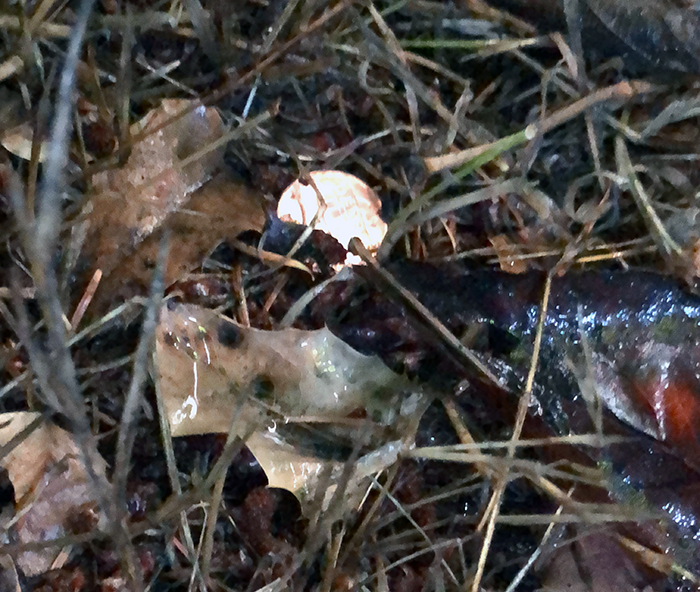 I crossed a dark intersection.  As a car passed behind me and I heard a familiar crunch.

I missed a cup in the middle of the side street.

I found a uti knife. 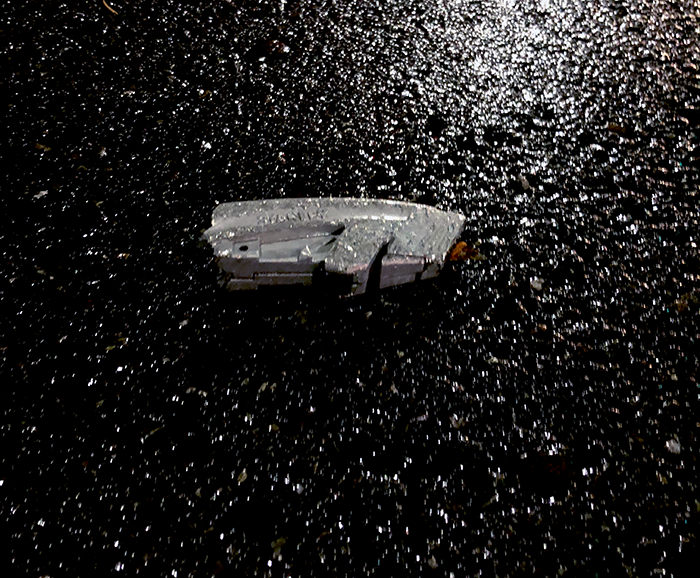 Half of a utility knife.  It was too far gone for the Found Tool collection and got recycled.

I found an unopened tube of caulk.

We’ve found several of these.  I just need to find something to caulk.

I ventured into the Gatorade Gully and came up with four Gatorade-Butt bottles. 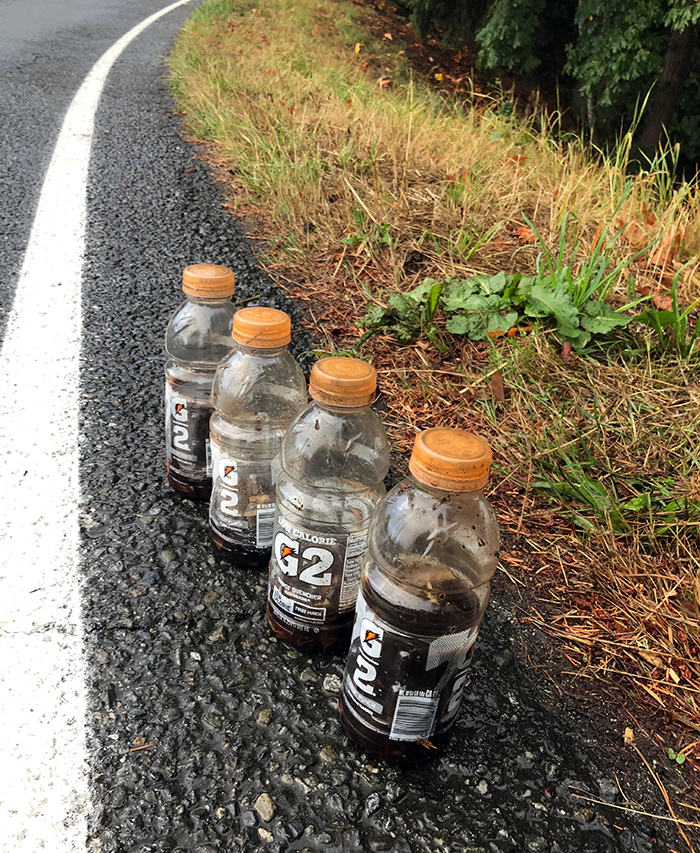 All were Fruit-Punch flavored and one was Lo-Cal.  Good to see the culprit is watching his figure.

I found further evidence of the McLitterers.

However, the condiments have changed:

I guess one of the McLitterers got tired of throwing away syrup and switched to throwing away Strawberry Preserves.  There’s no accounting for taste.

Today was the long Saturday walk without Janet.  I left the house at 5:30 am and returned about 9:45.  The couple who we see during our weekday walks on the top of the hill passed me on Riverside Drive and gave me an enthusiastic wave.  As I was nearing home, Steve from up the hill passed by and honked.

As I was crossing the bridge into Bothell, an Osprey flew under the bridge and continued down river.  There was also a Heron in the retention pond at the end of 112th Ave NE.  As I stopped to look, it took off down the street.

There was a lot of trash and I ended up leaving stashes at three different places and took the car back to collect it.  It took 45 minutes just to make it down the hill to Riverside Drive.  Along with several cans, bottles and other trash on that stretch, I found three separate McLitterer’s droppings. 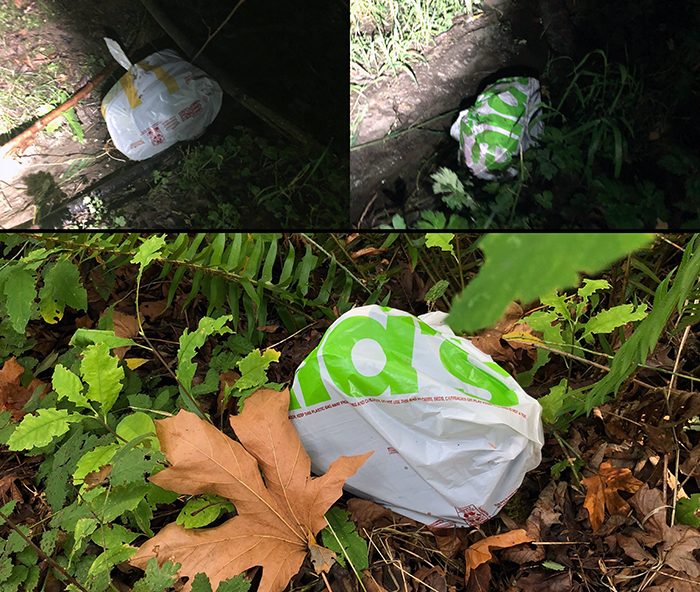 All of these had the standard, two-syrup sets of unused condiments.  No Strawberry Preserves.  Also, on the hill, I met this fellow.

He had that lean and hungry look, so I moved on.  Near him, I found some Wilson Omni Racquetball goggles.

Maybe I should have put them on him.

I found a pair of matching gloves on opposite sides of the street.

I came upon a fence hanger,

trying to decide which side of the fence to be on.

I also found two tools for the Found Tool collection.

In the clothing department, I found a pair of shoes near the Bothell bridge, 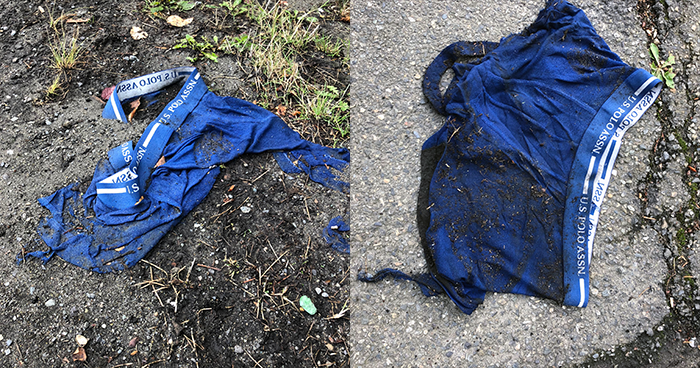 Already in  the garbage.  Also under the freeway, another hubcap.

We think most of the stuff we find under the freeway comes from vehicles on the freeway, not Riverside Drive.

I found a penny and a nickel.

Near the Bothell City limits I found three bags of meat in the bushes. 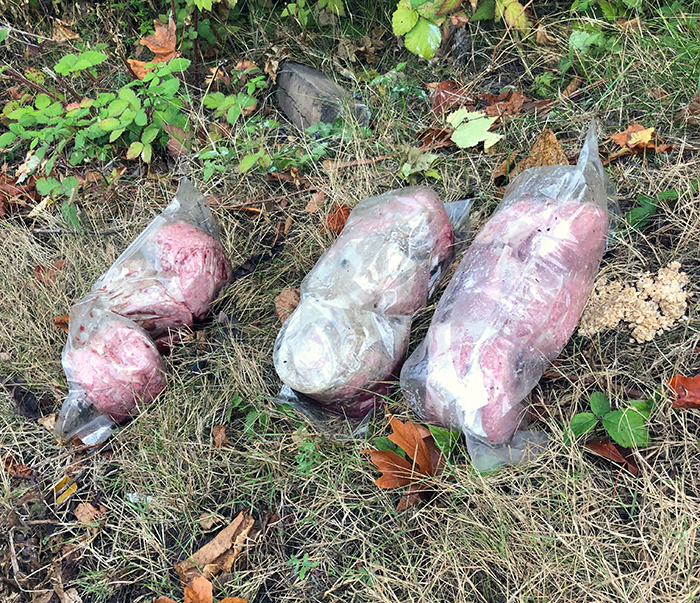 They were sealed in the store wrapping and didn’t look like they had been there too long.  They are in our garbage can.  It’s a good thing garbage pickup is Tuesday.

The drain at the bottom of the hill gets all the treasures.

A ball for our ball collection, a cherry-flavored Jackpot Cigar wrapper, a Coca Cola Cherry Zero bottle, an apple and a lid. 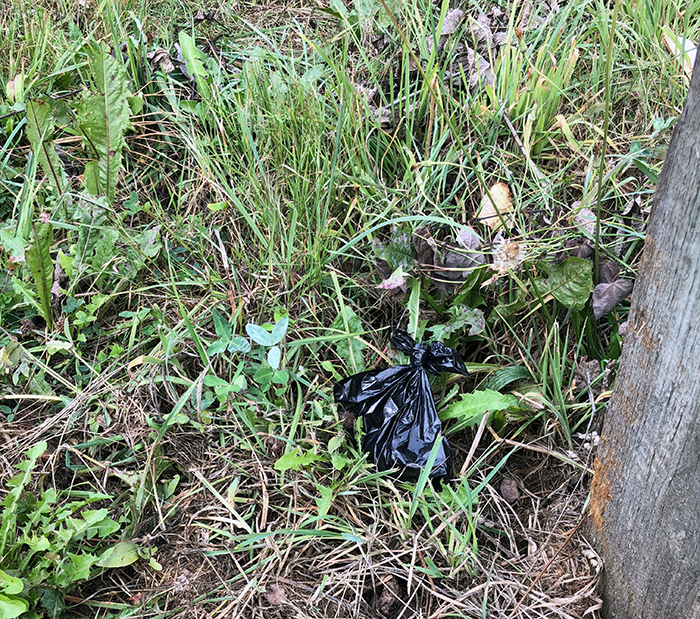 I also found a bunch of trash buried in a hedge. 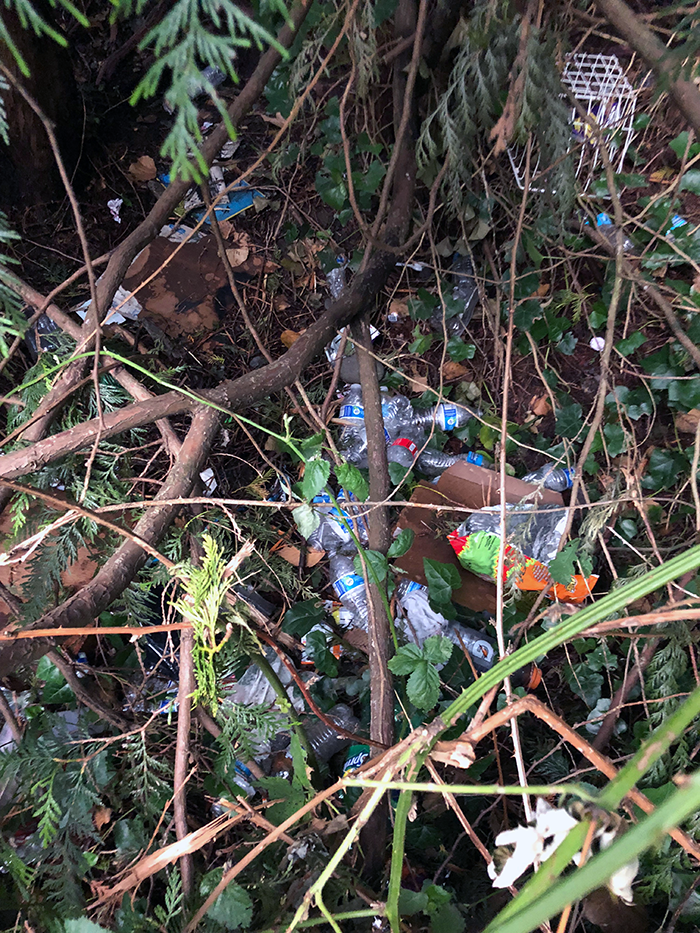 I don’t know how we missed this before, but hope it isn’t new.  I was not prepared to go after this, so it will need to wait for another day.

This looks to be the remains of someone’s meal.  It was found outside the apartments on 112th Ave NE near where we have seen people sleeping in cars.  It is unknown if they are connected.