Today we are back to our walking routine and got a familiar honk from Mr. Handyman.  We flung a rabbit and an opossum, both of which chose poor places to become roadkill and needed to be carried a few hundred feet for a place to be tossed.  Since we have been away for two weeks, there was a lot of trash and our walk took about 45 minutes longer than normal.

The first thing we found was a can stuck in a retaining wall.

This turned out to be a portend of the rest of the walk.  We harvested a total of 53 pop-tabs.

At the end of 112th Ave NE, we found someone had hit a sharp-turn warning sign.

They definitely missed the turn.  We didn’t find any rubber gloves but did find a disposed disposable shoe cover.

He shouldn’t mix his alcohol.  Also, on the hill, we found some gum. 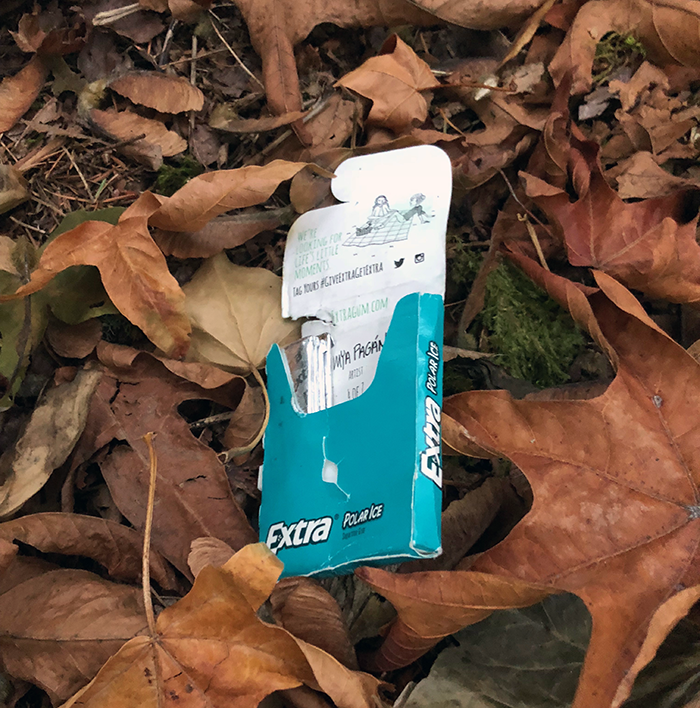 The guy was probably trying to cover the alcohol on his breath. 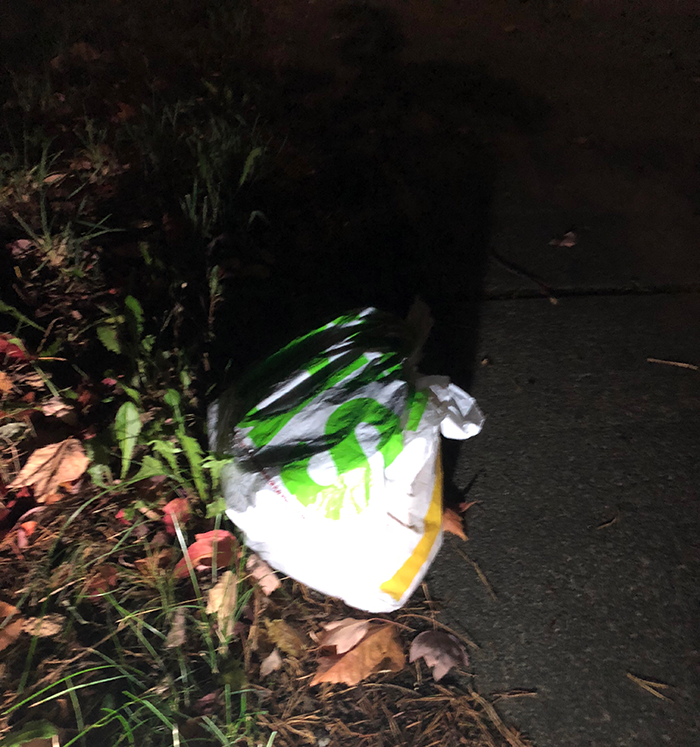 We found a standard bag from the McLitterers with syrup. 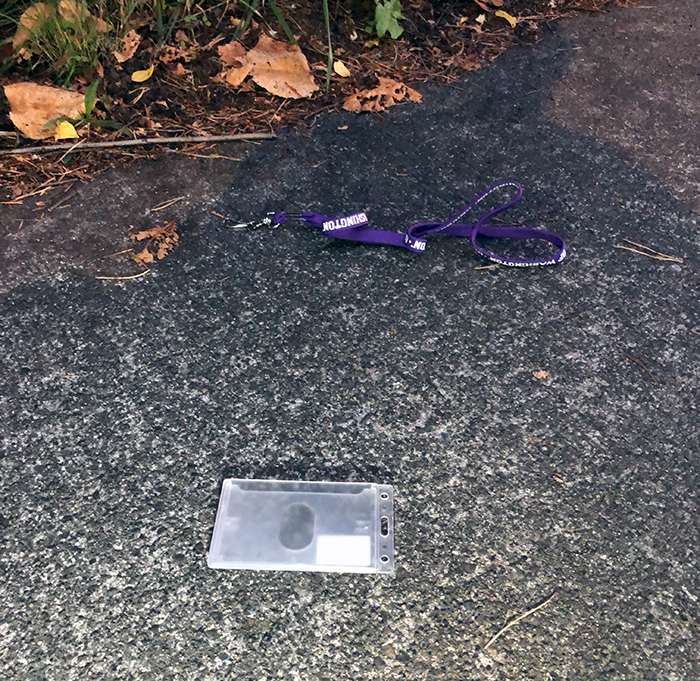 At the sharp curve on Norway Hill, an irresponsible dog owner is dumping poop bags.  Five of them today.

A new LimeBike is at the top of the hill.

This time it is an E LimeBike.

Today was cooler with a slight breeze, but no rain.  We waved to Salinas Construction but did not see any of our usual honkers.

The first thing we found was a present from our favorite McLitterers.

This had the standard set of unused condiments, but we didn’t find the cups.

By the bus stop, we found a nickel. 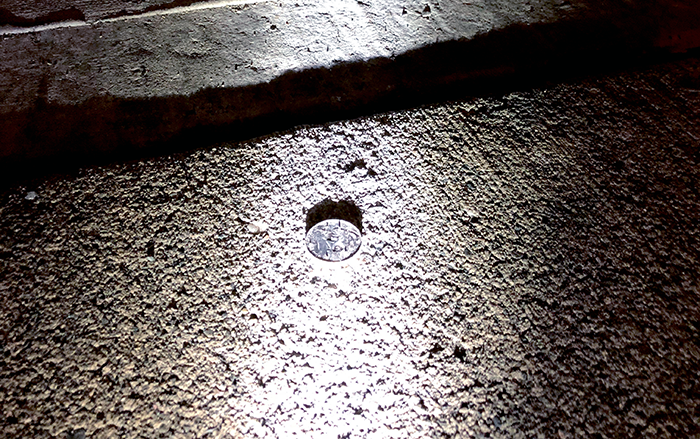 Then a little farther down the street we found,

Ten dollars laying in the gutter.  We also found a badly runover quarter.  The profits this morning totaled $10.30. 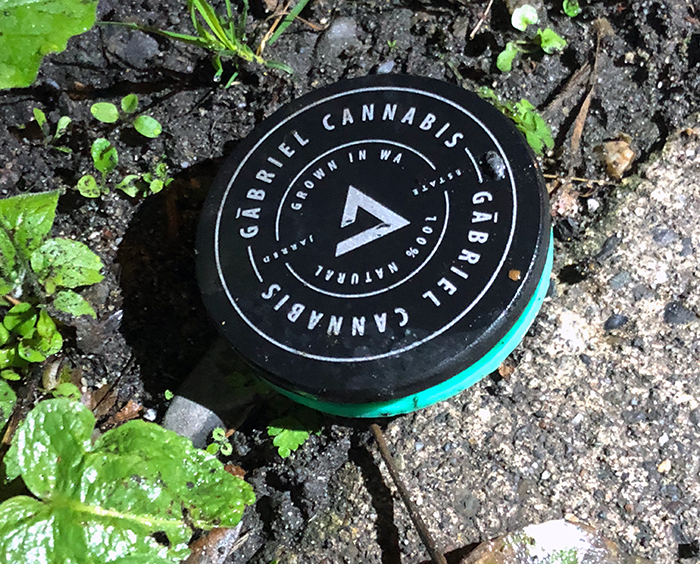 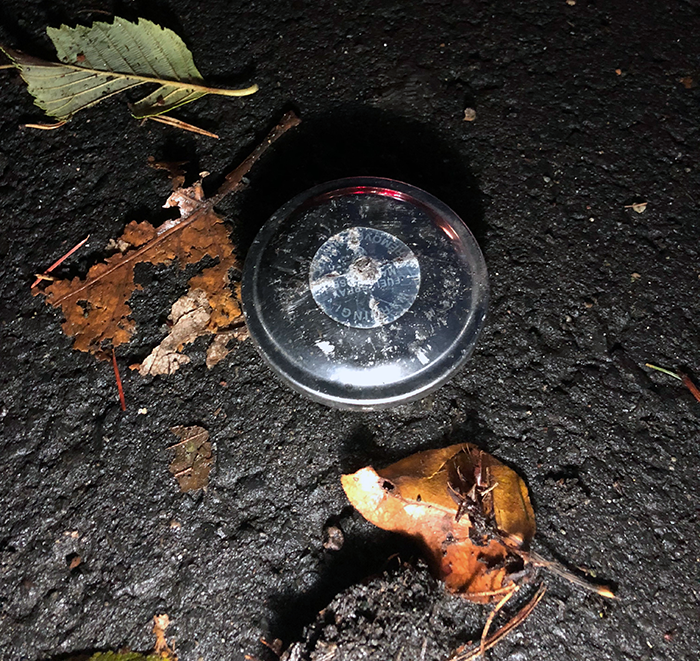 We found a hubcap, a cannabis cap and a gas cap, all along Juanita Woodinville Way.

We came across a pair of discarded shoes.

They were separated by about a hundred feet.  That’s ruler feet, not human feet.  It would be two human feet.  Anyway, they were heavy and ended up in the nearest trash receptacle.  We found a rubber glove, 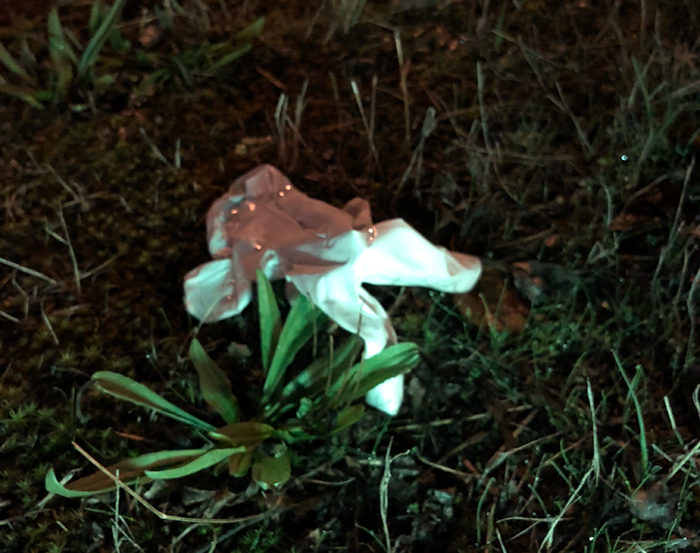 and a motorcycle glove. 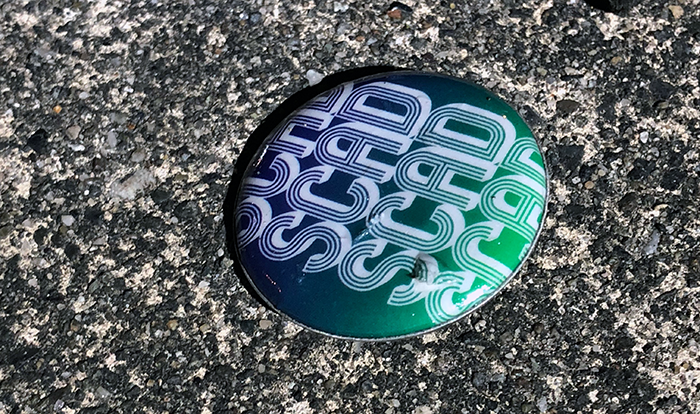 SCAD.  Savannah College of Art and Design? Or the Mackerel? 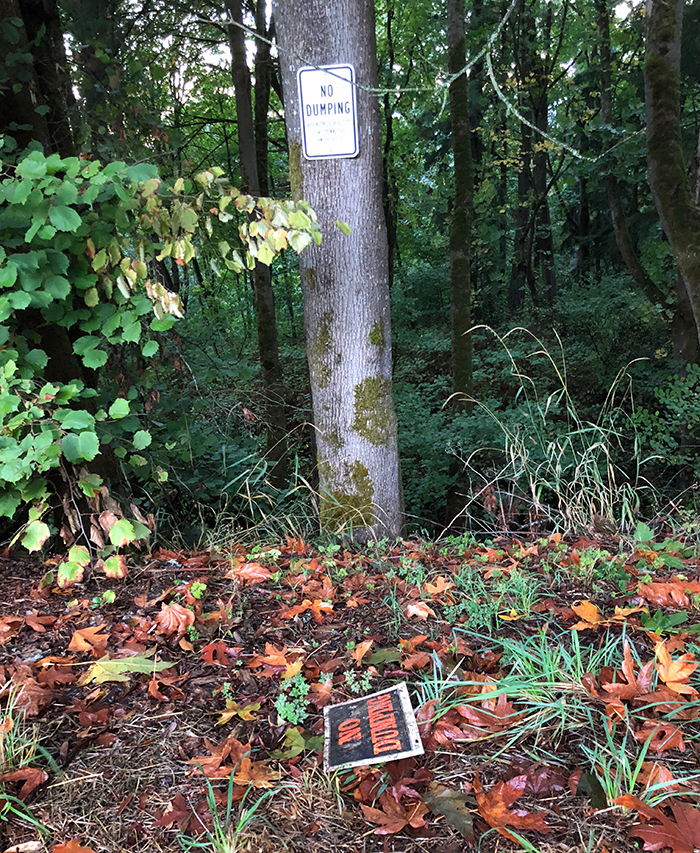 Today was a cool morning with a temperature of 38 F when we started our walk.  We did not find anything to fling but did get a honk from Mr. Handyman.

We found another ID Tag lanyard, this one from Cedar Park School.

Another half-empty carton of alcohol.

Someone is wasting a lot of booze.

A purple tennis ball for our ball collection.

We found a pair of rubber gloves, 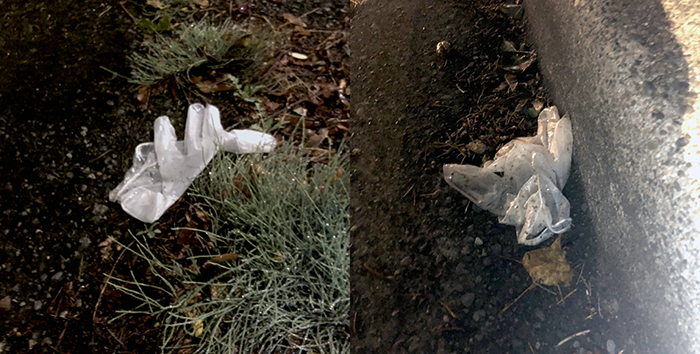 on opposite sides of the street with a dime bag nearby.

This is just asking for trouble.

It was a little warmer today and made for a more comfortable walk.  We got a honk from Mr. Handyman and waved to Salinas Construction.  Just as Salinas Construction passed, I heard someone call out from behind me.  A lady had crossed Juanita Woodinville Way to my side of the road.  She said her husband tells her about us every morning and wanted to shake hands with me.  I showed my rubber gloves and said my hands were dirty, so she bumped elbows with me.  She thanked us and gave us a $20 Starbuck’s gift card.

I think she was filming me with her phone during the exchange.  Turnabout is fair play, I guess.

They may have failed the class?  We found a discarded Mariner’s baseball cap at the Park and Ride.

Maybe I’ll wear it next season.  We found another piece of a BMW. 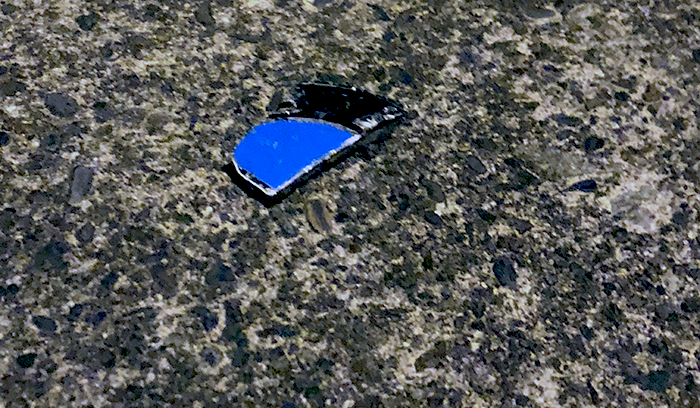 Another piece for my Build-a-BMW automobile project.

We wouldn’t want any of those fake ones, would we?

It’s never too early to teach them to litter.

We found a whole pad of these rebate forms. 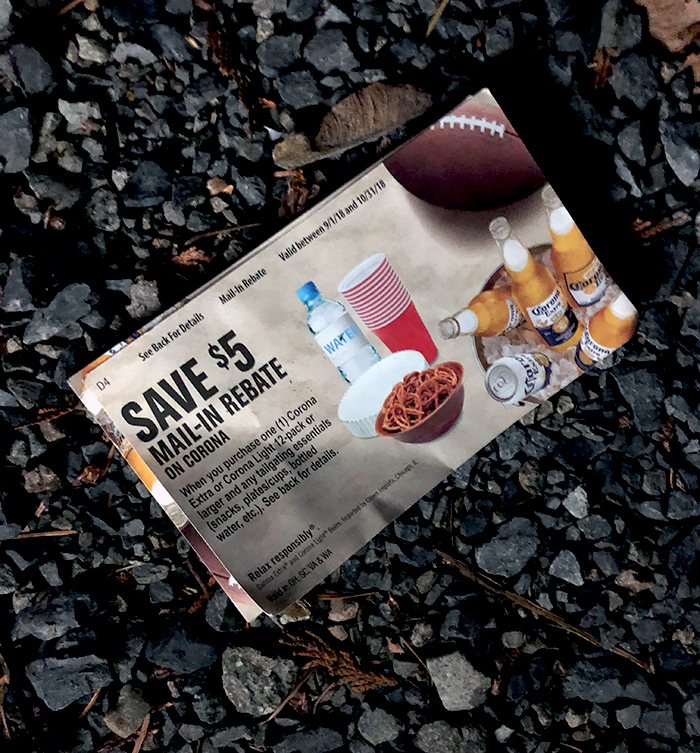 I guess I need to buy a bunch of Corona beer.

We found one of those license plates that is supposed to confuse radar detectors.

We came by this:

Yeah, I feel the same way about golf.

We ventured into the Gatorade Gully and found more beer cans than Gatorade butt-bottles. 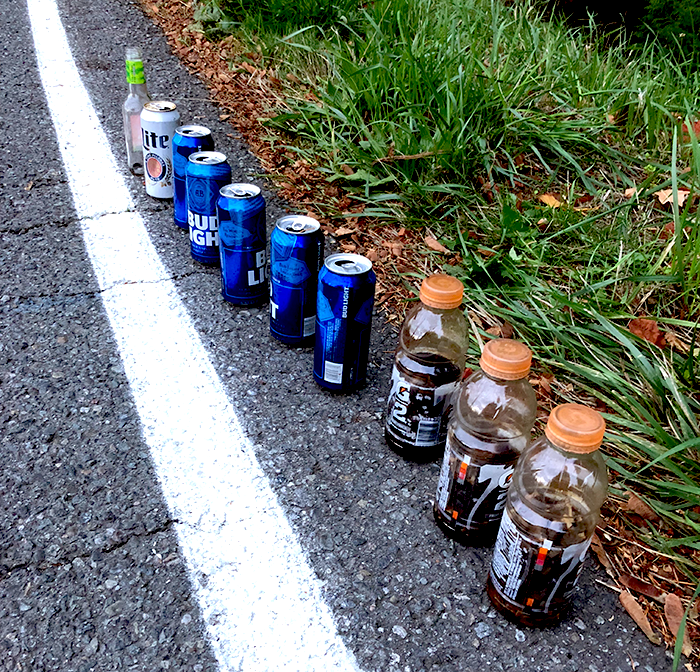 Bud Light seems to have invaded Norway Hill while we were on our road trip.

Since we missed two weeks of walking Riverside Drive, we walked parts of it including the hill down to Riverside to hopefully reduce the load on Saturday.  On the hill alone, we picked up 32 cans and seven McDonald’s bags including two McLitterers. 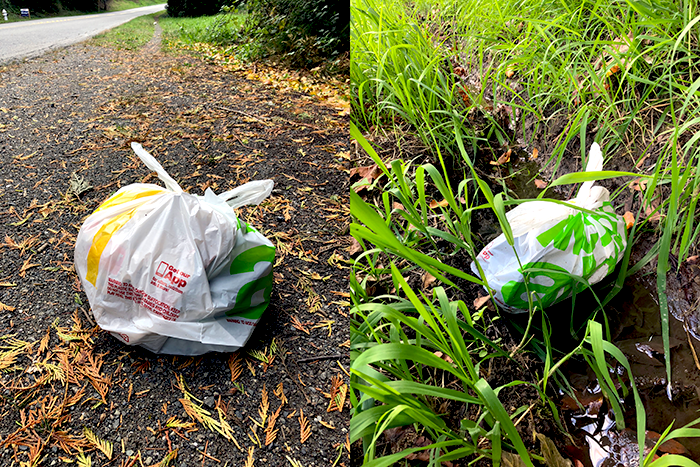 One with the standard two unused syrups and the other with one unused syrup and three unused strawberry preserves.

Someone lost their advertisement for Korum’s Nissan.

On the way down the hill, we found three empty Marlboro cigarette packages together.  A little farther on, we found a package half full.

It looks like the guy threw away the fourth package too soon.

Just like this litterer.  He threw out his litter too soon.

Today was a nice walk.  Rain was predicted but held off until we returned home.  We got a honk from Mr. Handyman and found one thin dime.  That brings this week’s total take so far to $21.40 not counting the $20 gift card.  This is a record for us, and we have one day to go.  So get out there and throw some money around.

We found another errant toy by the KinderCare and tossed it back over the fence.

A lost ball with no apparent home.

It now resides with our found ball collection.  Also found a screwdriver bit for the found tool collection.

We came across three of these.

Could it be pieces of a wig?  However, we also found a carcass. 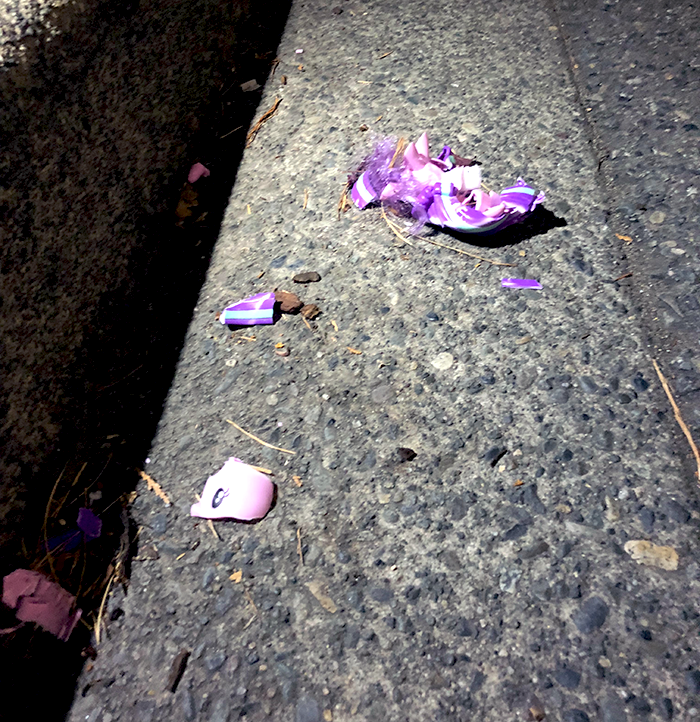 The remains of My Little Pony.  But it had purple hair.  No, we didn’t count this as a fling.

Today, Janet had grandkid duty, so Chuck walked alone.  The preemptive walks we did earlier in the week paid off and there were some well-placed trash and recycle bins, so no heroics were required. 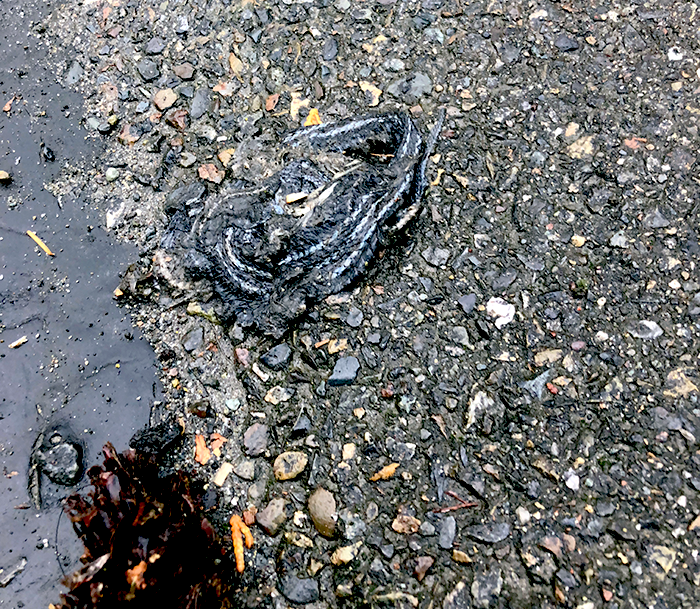 This is the first fling in a while and Riverside Drive continues to be a bad place for snakes.

I was informed by the powers-that-be that his one is beyond redemption.  Sorry Goodwill.  I did find a lady’s tee shirt, though. 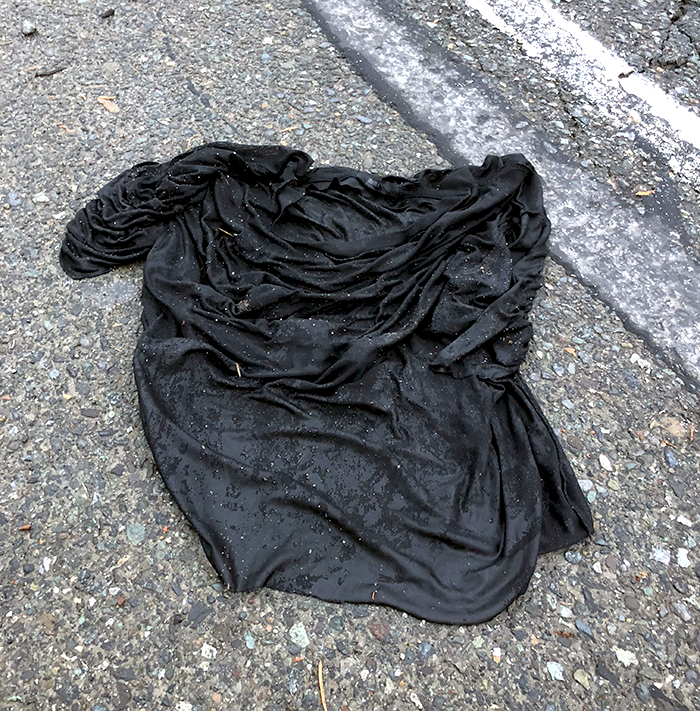 This is from a store named Forever 21 and is described as a sheer mesh top.  You’re welcome Goodwill.

For the last couple of walks on Riverside, the large wine bottles have been absent.  This was the pathetic replacement.

A small plastic wine bottle.  I did find another Vodka bottle.

Butt, not a Gatorade butt-bottle.  And of course, the ubiquitous pet owners who shouldn’t be.

These are getting kind of boring.  We need to know the story behind them.  Or maybe not.  I found more hubcaps.

Well, one was almost a hubcap.  There are some creative Halloween decorations out there. 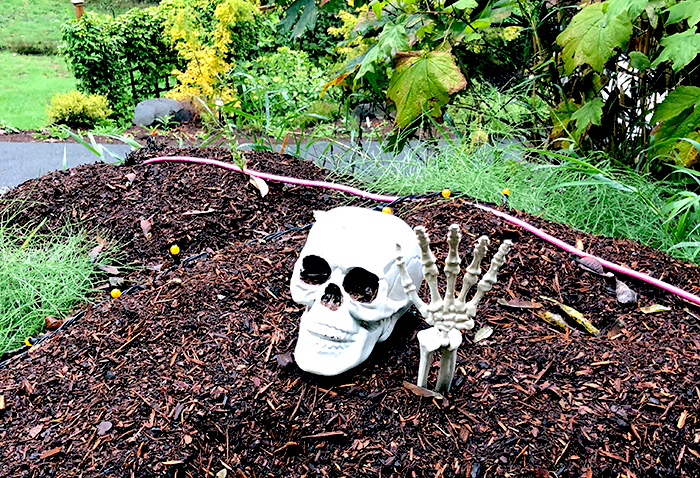 But it’s only October 6th.   When are the Thanksgiving decorations coming out?

I found a folding compass that had lost its direction. 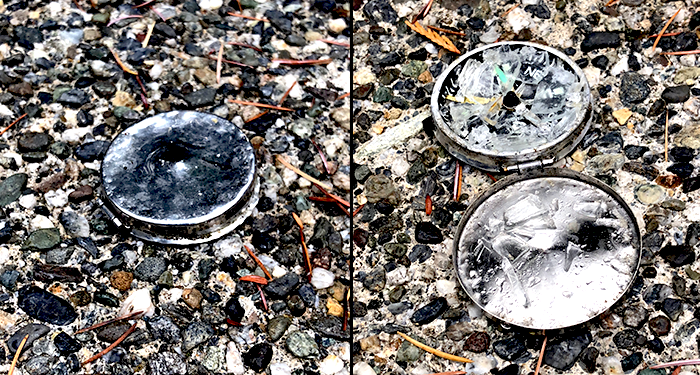 I almost got lost.  There was a water bottle slightly past the Bothell City limits. I picked it up anyway.  You’re welcome, Woodinville.

One thought on “Profitable Week”