This morning we checked the temperature before we went out.  One of our phone apps showed 37F and the another showed 32F.  We asked Alexa and she said it was 35F.  We then checked our indoor-outdoor thermometer and it indicated that the winner was Alexa at 35F.  It was a bit chilly, but bearable.  Since this was Veteran’s Day (observed) there was less traffic than normal and trash was also light, except for the cigarette butts, of course.  The Juanita Woodinville Way was swept so the cigarette butts are visible.

They did leave behind a bristle, though.

We found more evidence of the McLitterers.

This one was pecked through by a bird, probably a crow, that punctured one of the syrup containers.  Does syrup help when you must eat crow?

A lone sock in the middle of the road. 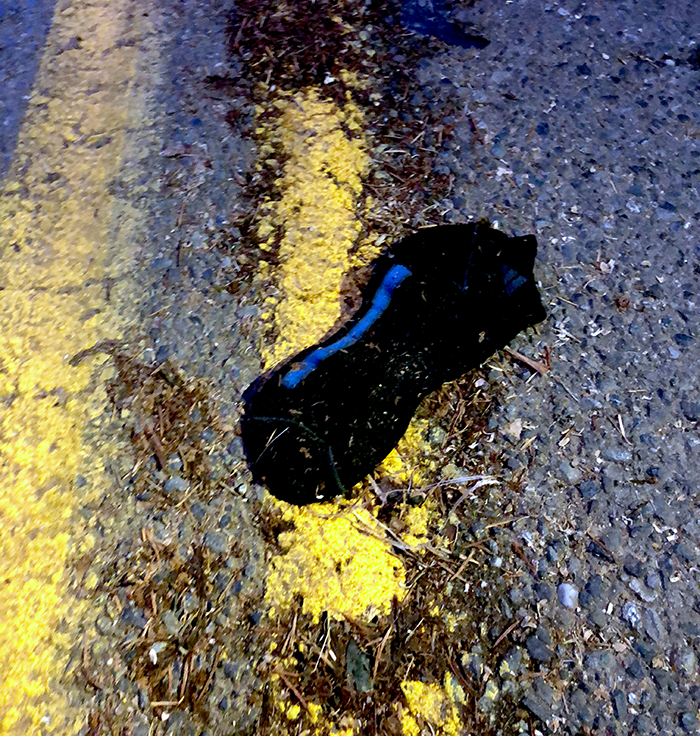 It probably escaped from someone’s dryer.

We found another lost gas cap across from the Safeway gas station. 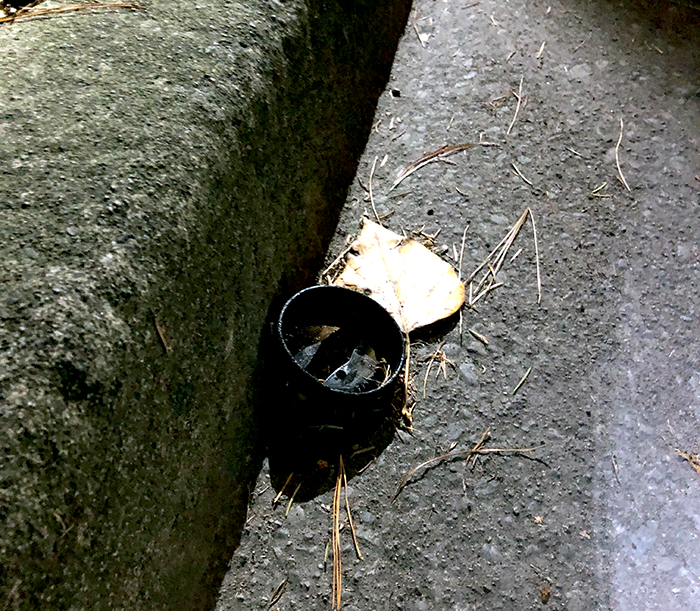 We reached the top of Norway Hill at exactly Sunrise, 7:11am.

So we took another picture.  We had much better results than last time.

We started our walk early today which threw our timing off.  We saw none of our usual honkers and arrived at the Park and Ride before the bus arrived.  There was a long line of riders at the bus stop so we bypassed it, not wanting to make even more of a spectacle of ourselves.

We found another gas cap, I think.

This one was close to the 7-Eleven and had been run over.

We also found a GearWrench socket. 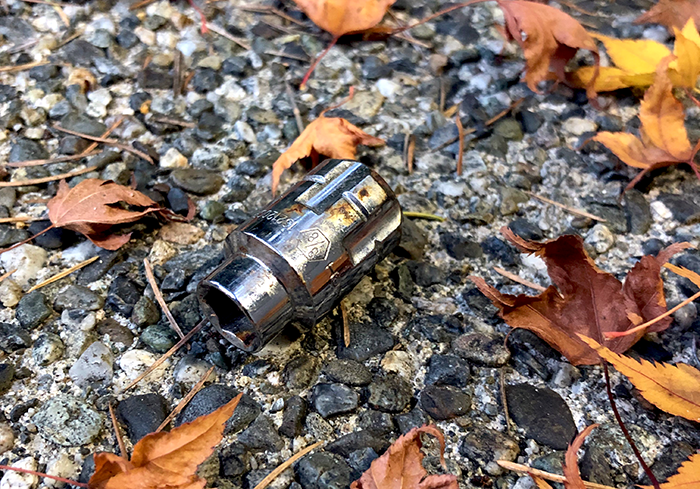 It’s now in the found-tool collection.  We also found a Juicy Drop Pop.

The ad copy for this states, The double-sided candy gives you the choice to lick it or squeeze the flavoring into your mouth. Put the cap back on and stick the sucker back in to save the super sweet treat for later.  Or in this case, toss it out the window.

Good news: it was 10F warmer today than yesterday.  Bad news: we got rained on.  It misted through most of our walk then turned to a heavier rain coming down Norway hill toward home.  There was quite a bit of trash and moderate traffic.

On the Juanita Woodinville Way, we met three people walking toward us.  It was dark and they were dressed in dark clothes with no lights or vests.  One of them was walking very near the fog line.  Not very safety-conscience at all.

At the top of Norway Hill, a guy who lives on the hill stopped to talk to us.  We’ve met him on other occasions and he is always interested in what we picked up.  I showed him two Washington State scratch cards that someone dropped.  He took them to check if they were winners.  We talked to him for about ten minutes until it started raining.

We found a rubber glove with its mate stuffed inside it. 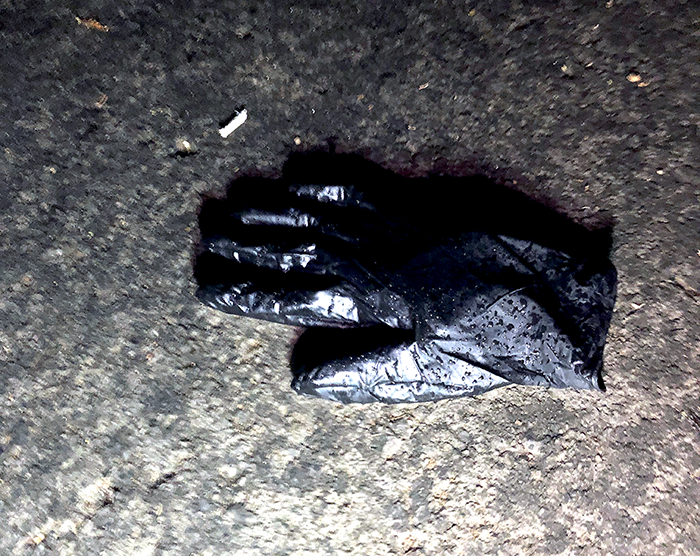 Yes, that’s a cigarette butt just out of reach.  We found more cigarettes:

Someone threw their pack out too soon.

We found a bullet on the street.

We found a Twist Popper. Then picked up bunches of ribbon and confetti for the next block.

Yeah.  Lots of fun if you don’t have to clean up the mess.

We also found this. 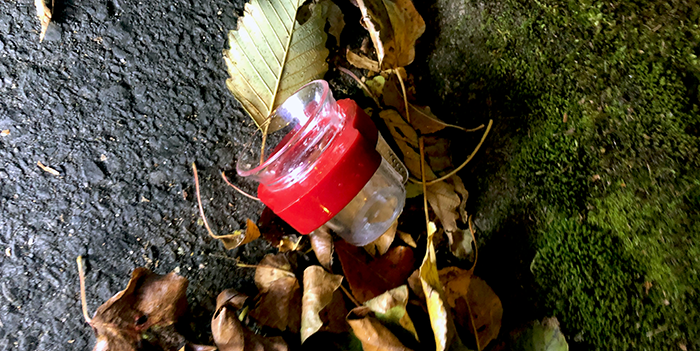 We are not sure what it is, but it’s labeled “Property of Rite Aid USS” and “Century.”  It looks like part of an RFID merchandise control system.

Finally, we get a daily email from Meh.com that is fun to read.  They offer one product for sale per day and provide a humorous write-up on it and other tidbits of humor.  This was part of yesterday’s email:

We can only hope.

This morning was even warmer at 50F and we ventured out without our rain jackets.  We waved to Salinas Construction but did not see Mr. Handyman.  Unlike our last Park and Ride walk, we timed this one perfectly with the bus and the bus stop was free of people.  We did fling a rabbit.

Somebody lost a safety light at the bus stop.

On the freeway on-ramp we found a rare matched pair of gloves.

And later, an unmatched one.

In the Park and Ride lot, we found a bag with an empty six-pack of Bud Lights in it. 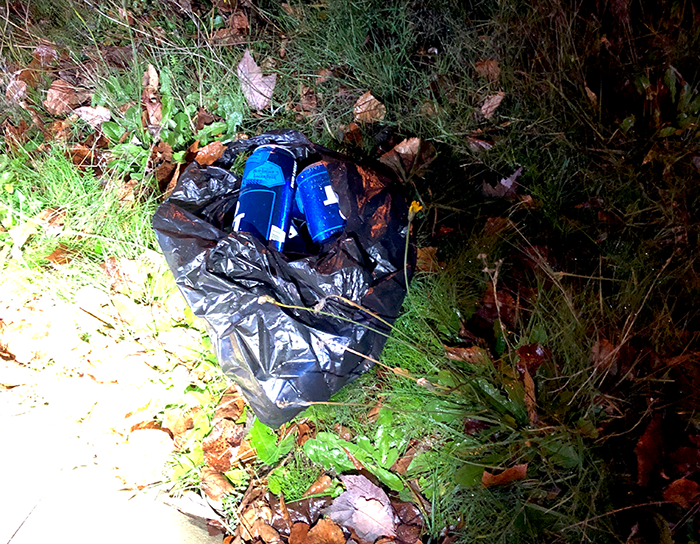 All the really cool people hang out and drink beer at the Park and Ride.

We also found a dime in the parking lot.

In the street, we found the bottom of a broken piece of pottery.

That is pretty expensive for pottery from Goodwill.  They must have kept the good part.

When we reached our turnaround point at the end of 145th, we saw something dropped across 100th and ventured over to retrieve it. 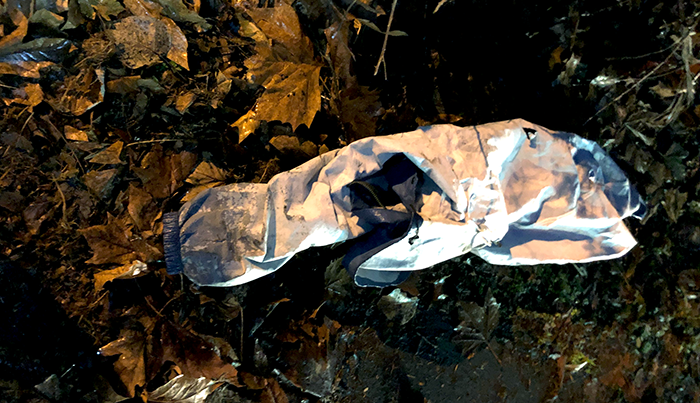 It was a Frogg Toggs rain jacket that someone lost.  It is now headed for Goodwill.  Maybe we will return the pottery shard with it.

We found another bullet today.

But this one is real.  It looks like a .22 caliber shell, but I don’t think it is useable.

Today was another mild day with a misty fog.  We didn’t see any of our normal honkers.  We did find some discarded stolen mail along Juanita Woodinville Way and over Norway Hill.

There was nothing worth returning to the owners.

We found a postcard.  A couple of blocks later, I told Janet that I forgot what the postcard was.

This brand’s motto is Respect for the Earth.  Obviously, their customers aren’t required to.

It was a dark and misty morning.  Suddenly, a pair of eyes appeared through the fog.  I froze.

A dog howled in the distance.

This morning was cooler than yesterday and there was lighter-than-normal trash, or at least it was covered with leaves.  So, we had a quick walk of about 2 and a half hours.

We did find some money this morning.

We found an unopened piece of Japanese bubble gum.

Marukowa Bubble Gum.  About $5 for 8 pieces on Amazon.

We came across a lost flashlight. 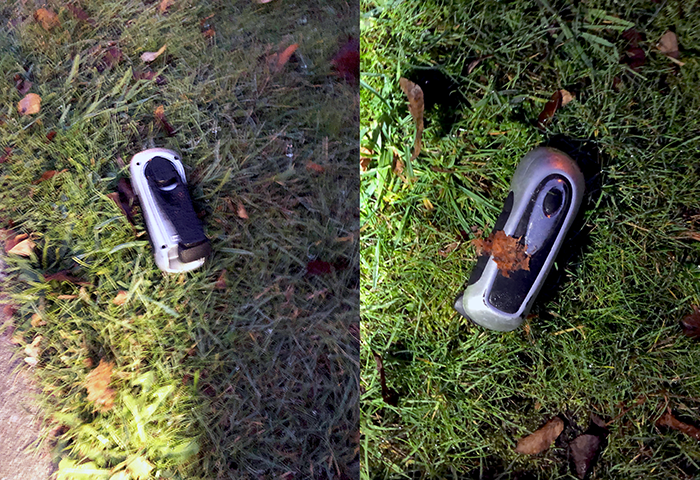 This is one of those survival flashlights that you can crank to charge up.  However, this one doesn’t seem to take a charge.   If the switch is on and it is cranked, it does light up, but once you quit cranking, no light.  Not very convenient to use.  I think I know why it was discarded.

We found a boy balloon.

From the Clothing Department, we found a sock and a glove. 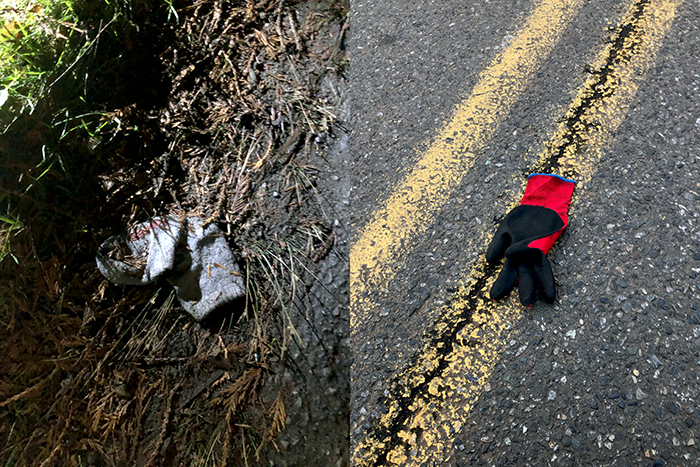 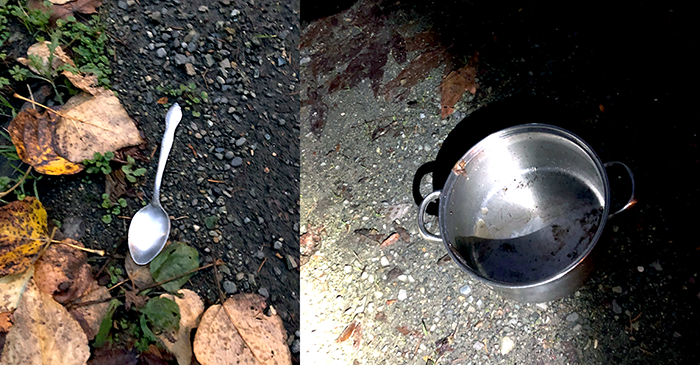 A spoon and a pot.

It had been run over, so it’s headed for recycling.

One thought on ““Light” Trash”