This was a clear, cold morning at 33F.  The traffic was fairly heavy but we didn’t see any of our regulars.

The first thing we found was a bedsheet discarded in some bushes. 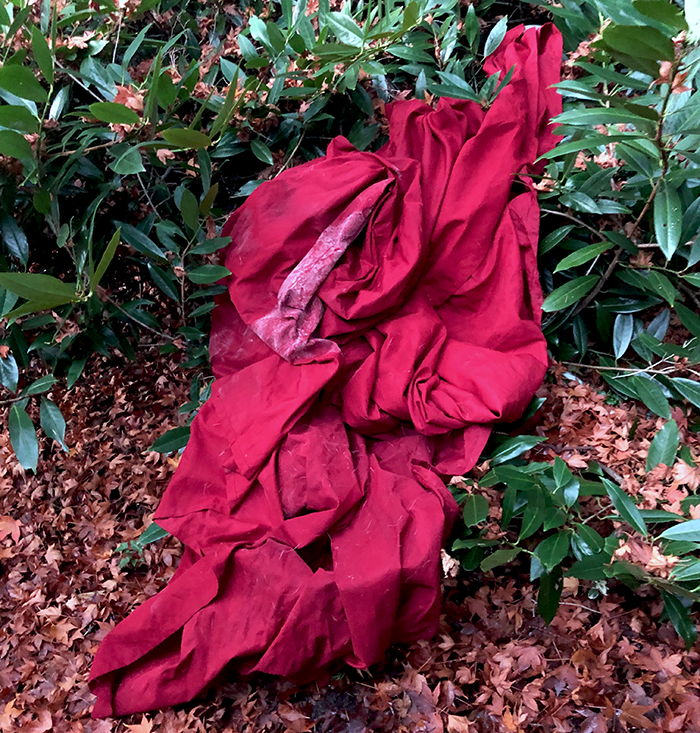 Doesn’t fit our decor, though.  It’s destined for Goodwill. 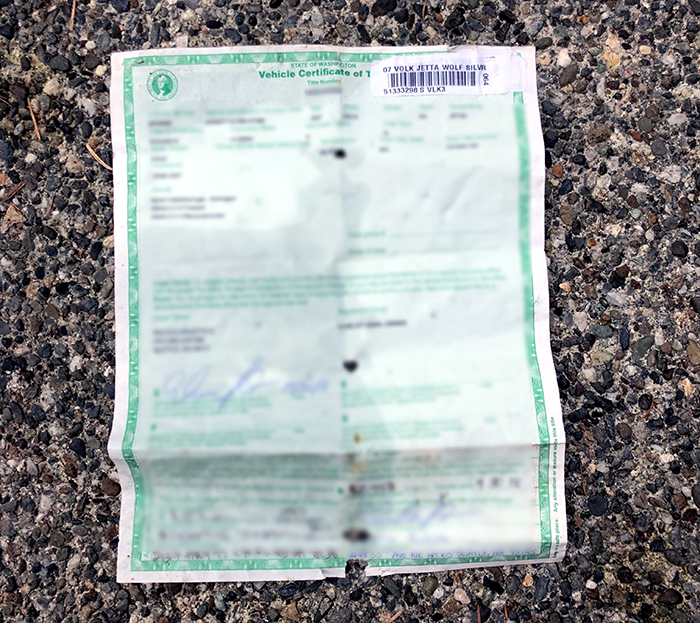 It was probably pilfered from their car.  We’ll take it to the DMV and let them deal with it. 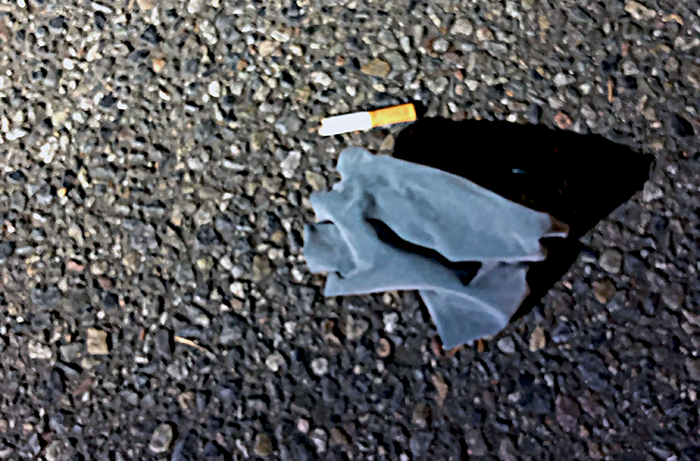 We call this Glove and Butt. 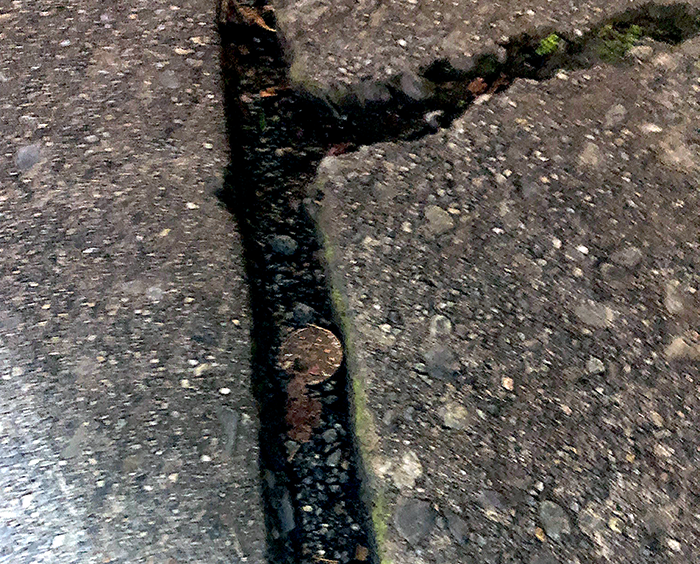 It was in a crack between a driveway and the sidewalk so we’ve probably passed it many times without seeing it.  Fortunately, or not, there was a cigarette butt nearby that drew our attention to the penny.  It was in pretty rough shape.  I guess a bad penny always turns up.

This was yet another clear, crisp morning with moderate traffic and light trash.  We did wave to Salinas Construction, but Mr. Handyman has been a no-show for a while now.

Someone tossed out their hunting/fishing parking pass.

This was tossed in the middle of the street.  The bag had been run over several times and was empty.  That’s one way of disposing of it.

We found a pair of dust masks. 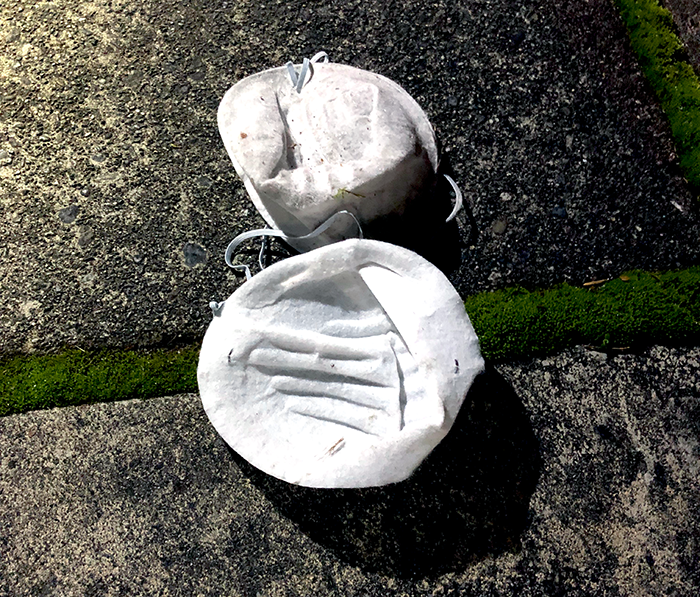 Maybe it belonged to the person who accidently tossed their cell phone out with their litter last week?

We had grandkids stay overnight with us, so Chuck walked alone.  Today was much warmer than the past couple of days.  Being the day before Thanksgiving, traffic was very light and there was relatively little trash.

After I reached the end of Juanita Woodinville Way and on my way back past Safeway, I heard someone say he wanted to know my name.  A man approached me and I said my name is Chuck.  He introduced himself as Gary.

Gary said he has seen my wife and me picking up trash for a couple of years out here and has also seen us up on the hill where he got hit by that “great big tree.”  I replied “That was you?”  He said it was.

Flashback two years ago yesterday on a mild Sunday afternoon.  Janet was in her office when she heard a tree fall.  We went outside and a tree had fallen across the road with its tip in front of our driveway.  Under it was a black Audi A3.

The driver was Gary and his girlfriend was in the passenger seat.  They both escaped with minor injuries.  Gary calls that day Tree Day.

Gary said he has called both the cities of Kirkland and Bothell telling them they need to find out who we are and thank us.  We spoke for about 10 minutes and I continued on my way.

I found a book of matches. 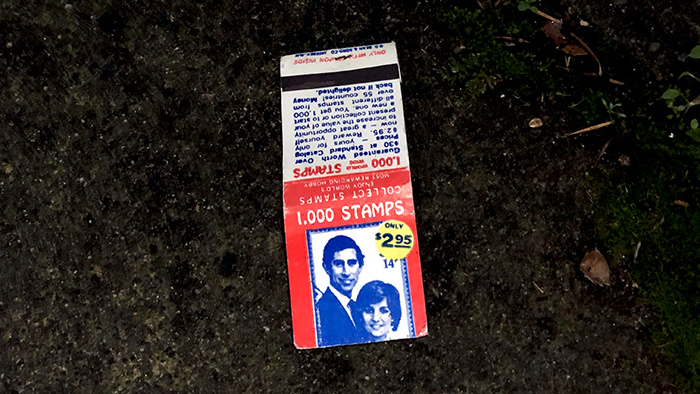 We rarely find matchbooks, which seems odd since we find so many cigarette butts.  We do find discarded Bic lighters.  I didn’t know they still did advertisements on them.  Remember the “Draw Me” matchbooks?

Someone left a mess in a parking lot.

There was a dumpster about thirty feet away.

On the hill, I thought I’d found breakfast!

But the banana was only the peel and the sandwich in the aluminum foil was already half eaten.

Happy Thanksgiving!  This morning was misty, but still relatively warm at 47F.  We also had a “first” today.  We had a bark-by. 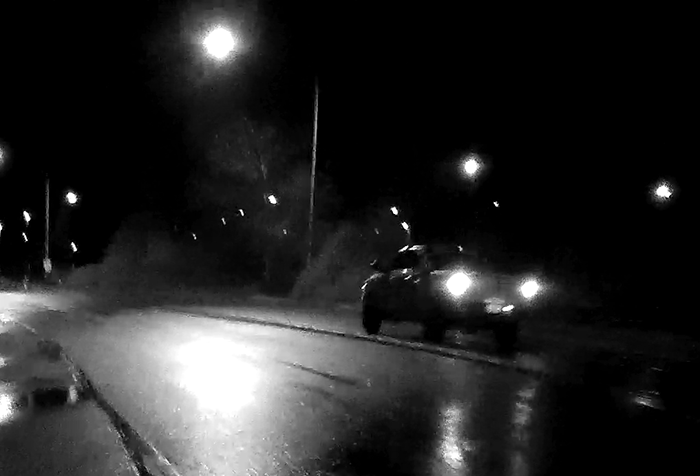 This truck had a dog hanging out the back window that gave us two barks as it went by.

Traffic was very light and we took the opportunity to walk a little way down the freeway on-ramp.  We picked up a lot of miscellaneous trash including a 4×4-foot piece of black plastic and a sandbag left over from construction.  We emptied the sand, of course.

We also found a set of license plates separated by a couple hundred feet.

We have found license plates before.  When we found the first one, we took to a DMV Licensing Agency.  We expected that they would contact the owner.  However, they said they gave them to the Boy Scouts to recycle.  Since that time, we have skipped the middle man and just recycled them.

This is the first pair of matched plates we’ve found.  We suspect they were stolen and used in some criminal activity.  The tags are good through November of next year but a license plate query did not return any results.   So they have probably been reported and removed from the system.

What to do while waiting in the long, metered on-ramp lines? 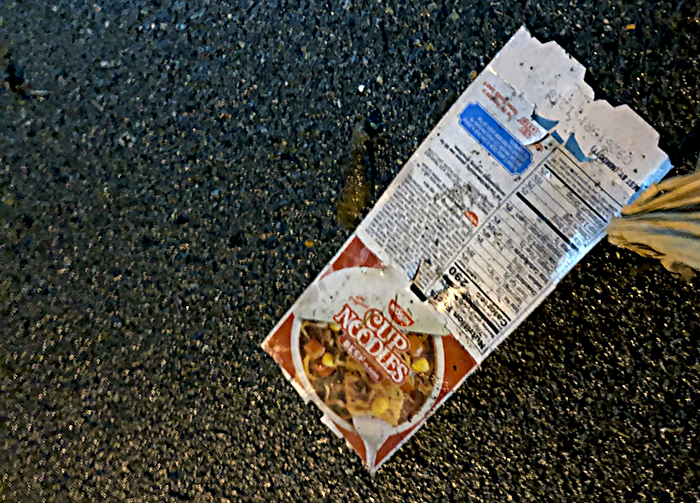 Make yourself a Cup of Noodles, of course.  Why didn’t I think of that when I was commuting?

In the Park and Ride, we found a kid’s vest. 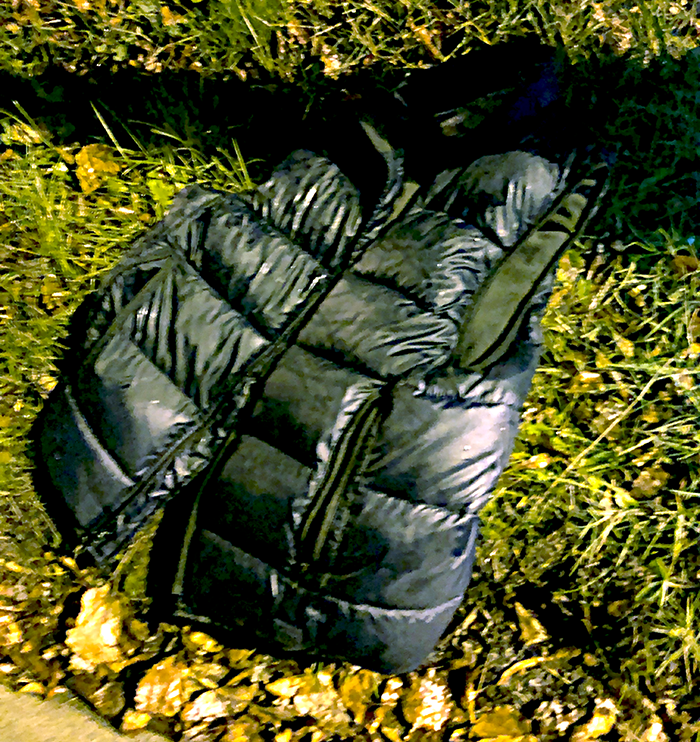 We left it hanging on a post by the bus stop.

Later on our walk we found some sort of yellow wheel.

We also found the remnants of a hub cap, we think.

We didn’t find any other pieces, though.

Over Norway Hill, we found several beer cans and other trash.

Trash at the Tolt Pipeline and a marijuana jar, Tulalip Cannabis. “Discover what it means to LIVE HAPPY LIVE HEALTHY.”  Wonder if they are going to keep the slogan after the recent bad press.

We found another batch of discarded stolen mail.

This had a couple of pieces of real mail in it so we will try to get it back to the owners.

We also made another excursion into Gatorade Gully. 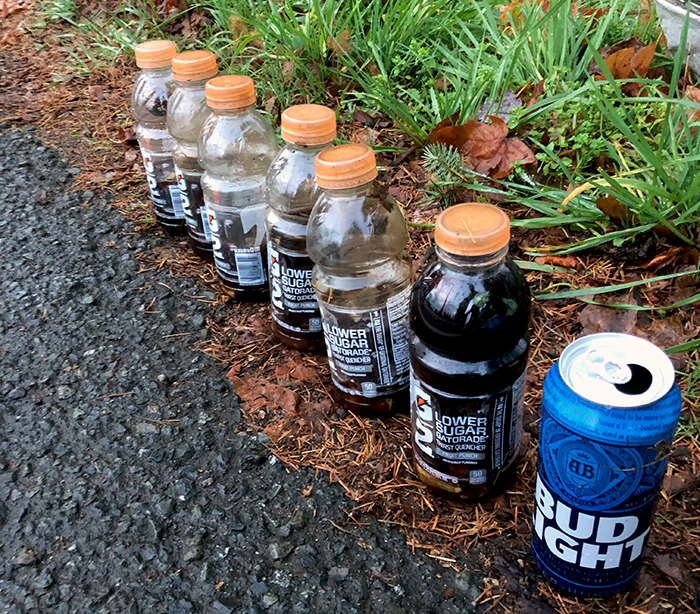 Six Gatorade-Butt Bottles and one Bud Light can.  It’s been about two weeks since we last cleared the bottles.

It rained this morning during our walk, but the traffic and trash was again light.  It made for a quick walk.

We found a couple of things we couldn’t identify.

This looked like another car antenna, but it wasn’t.

And, we found this.

This is made of rubber and looked like there was an LED light inside, but no wires or batteries.  An electric peony? 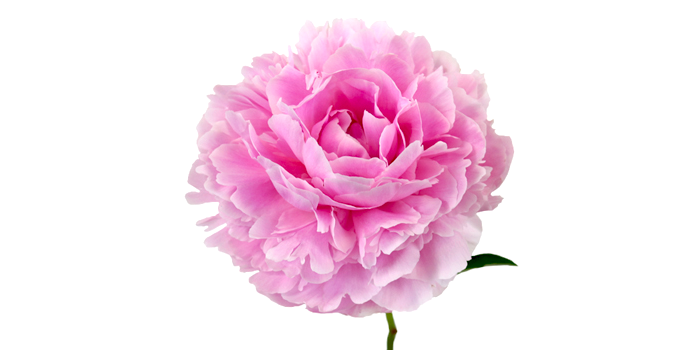 I missed this, but Janet pointed it out to me.

Two bags.  This is a regular occurrence at this spot.

We found this laying by the side of the road. 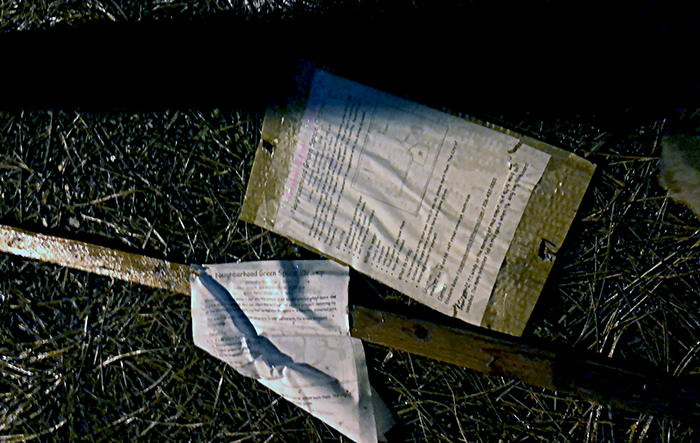 Its a notice about a planned neighborhood cleanup.  They need to add this sign to the cleanup list. 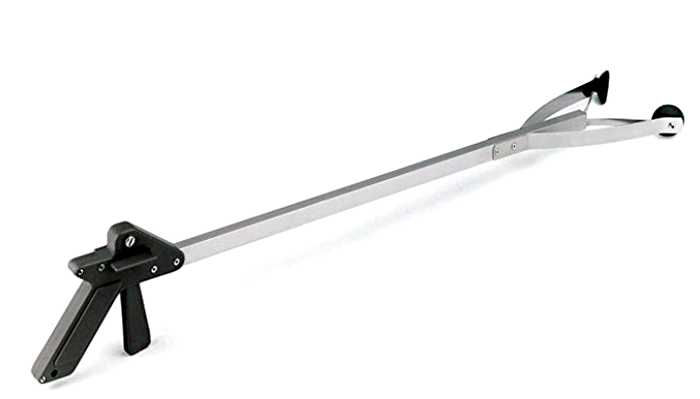 We found a hammer. 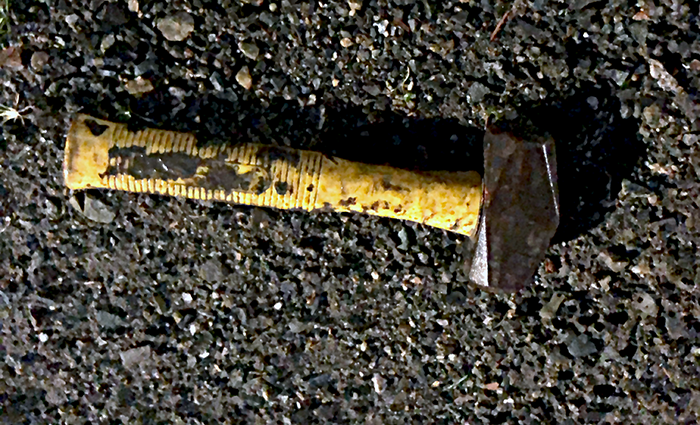 It was near a construction site so we left it where someone could find it.

Award for the most creative use of a bicycle chain.

We can understand the chain and the black tape, but the erasable marker?

From the clothing department,

a glove and a sock.

two balls.  One was a dog ball with a bell inside, but the bell had lost its ding.  The soccer ball had been run over and had lost it air.  The dog ball is in our found ball collection and the soccer ball ended in a garbage can.

We found some doors.

Maybe someone is planning a tree house.

The car is gone, 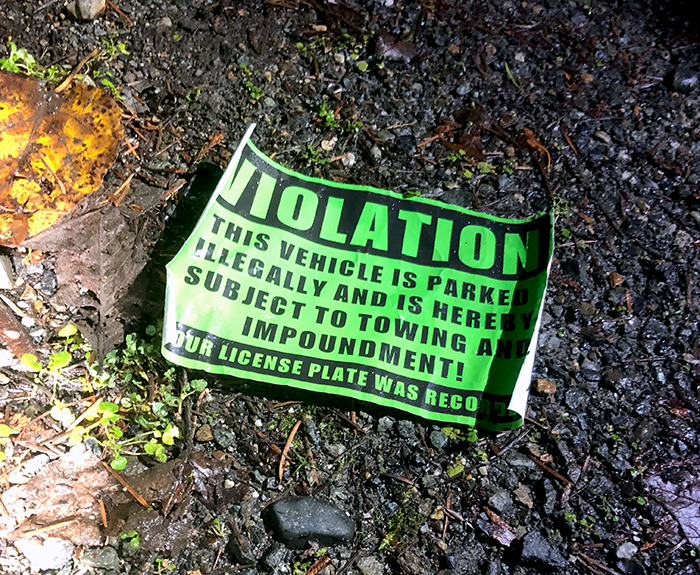 but they left the sticker.

I wonder if they make bacon lipstick?

One thought on “Tree Day”