Today was clear and a relatively warm 52F.

We picked up an adult sippy cup with coffee in it.

It has a weighted bottom so it won’t tip over.  It did. 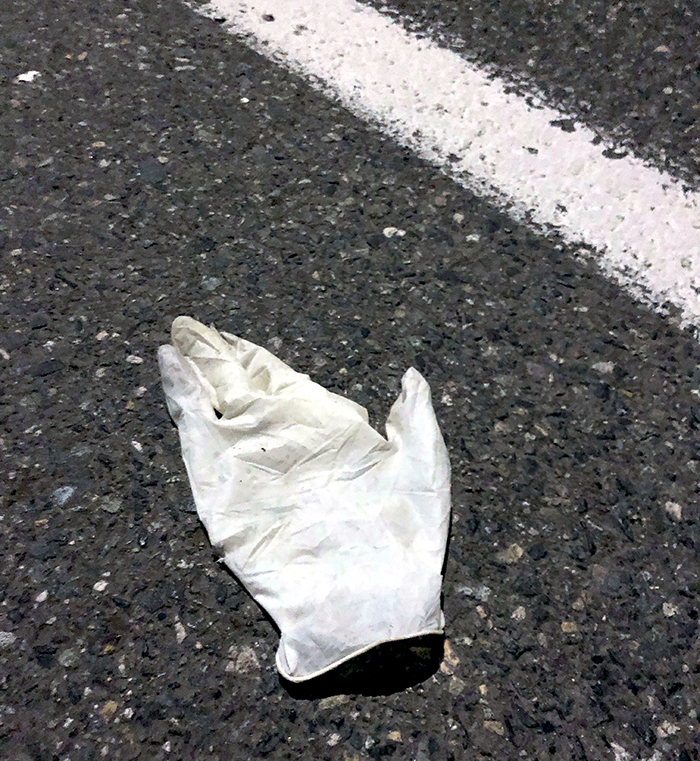 Another toss ring outside the KinderCare. 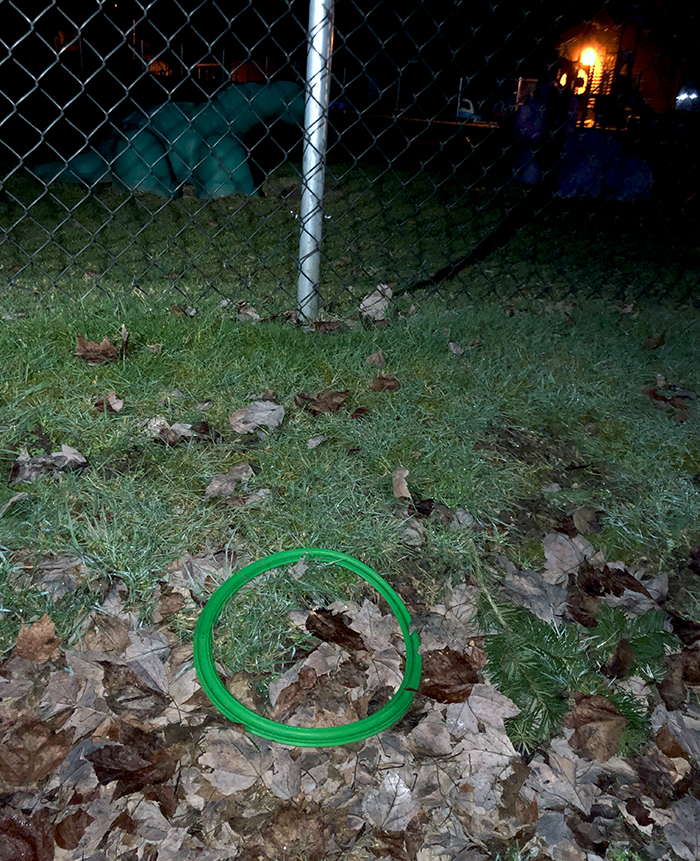 It’s probably not the dinosaurs tossing them over the fence. No opposable thumbs.

We picked up a cup and cap with a sucker instead of a straw.

How hard did the guy need to suck on the sucker to suck up his drink?

At this bus stop, the fence has had a gaping hole in it for at least the four years we have been walking.

Today there was caution tape draped across the hole. Perhaps someone fell through the hole?

A green Razor scooter was thrown in the bushes along NE 145th St. 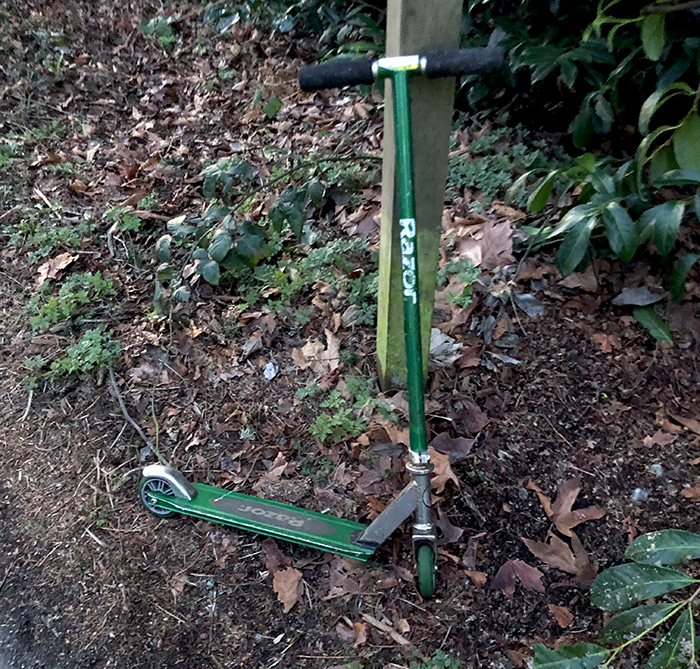 It was too small for us so we pulled it out and set it against a stop sign.

A pair of toddler’s white gloves in good condition.

They will end up at Goodwill.

We found part of a Twist Time Tower Crash game. 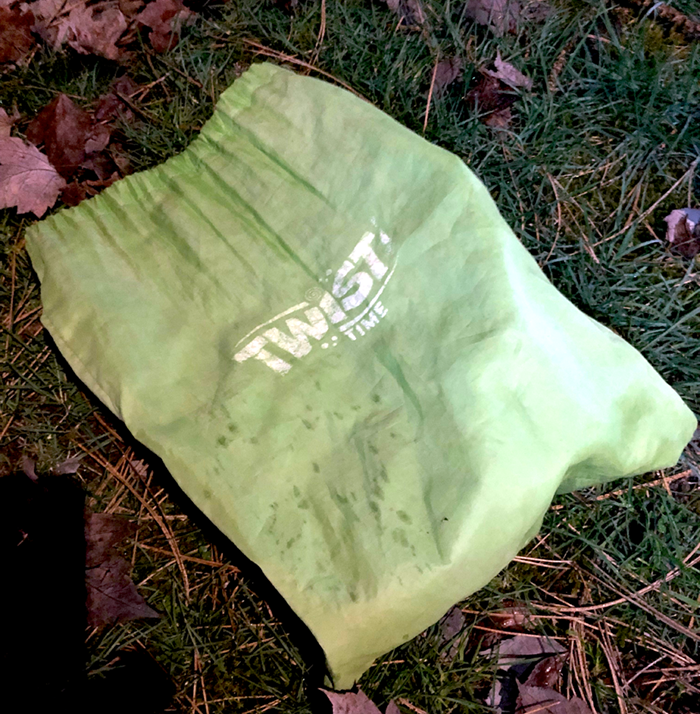 According to their website, it includes 24 pillars, 8 rings, 1 dice [sic] and 1 storage bag. We found the storage bag.

We also found a dog-poop bag. 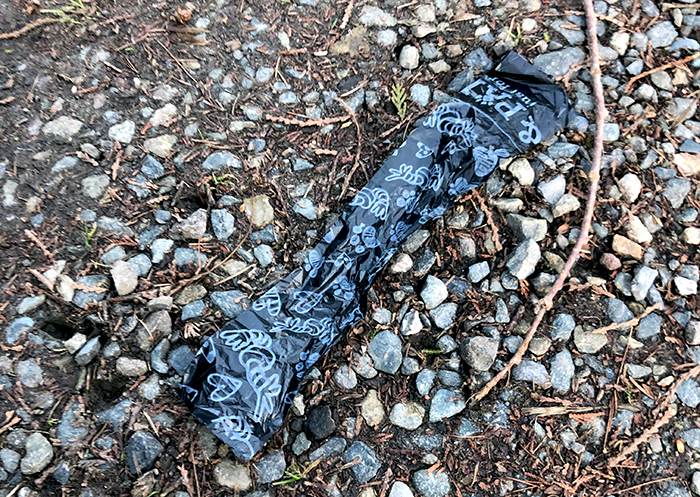 Unused, for a change.

But we did find a used Gatorade Butt-Bottle. 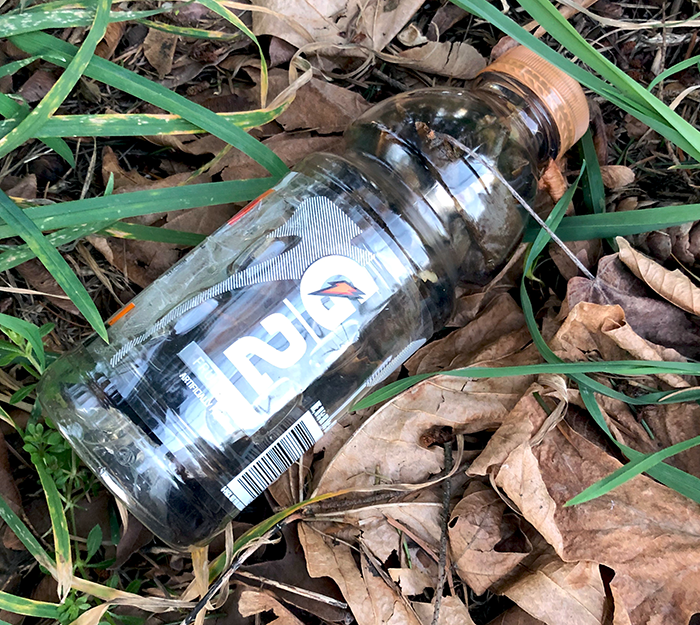 It was not in the Gatorade Gully, though. Another amateur. 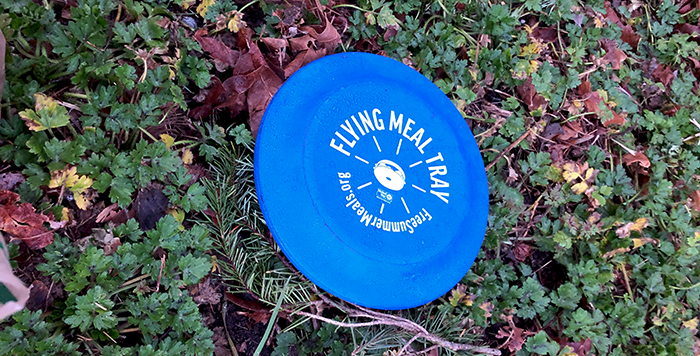 They need to find another method of delivery. The food will fly off this thing.

Today was another warm morning walk.  We got a honk from Mr. Handyman and waved to Salinas Construction.

We picked up a couple of gloves.

A very colorful knit glove and a very uncolorful rubber glove.  As in nature, the colorful one must be the male.

At the Park-and-Ride bus stop, a young lady with her baby was sitting on the bench.  We’ve seen her several times on our walks and wished her a good morning.  She pointed at a bag next to her and said someone had left it there.

We thanked her and picked it up.  We asked if she wanted it but she declined.  It looks like some kind of cereal, but didn’t try it.

Flunnel is a portmanteau word from the words flat and funnel. 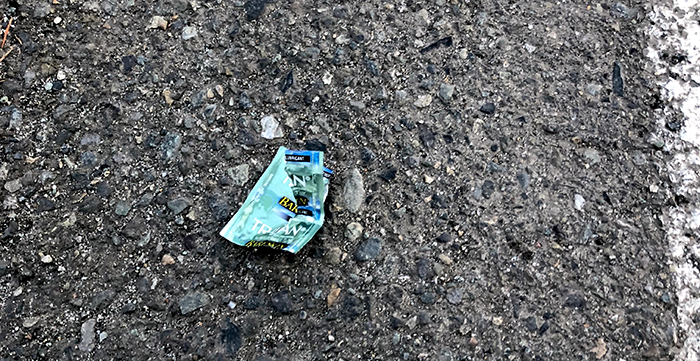 Fortunately, we didn’t find the contents.

At the Park-and-Ride, we picked up several Bud Light cans.  Also, on our route over Norway Hill, we have been watching cans accumulate down a steep embankment but have been reluctant to venture down.

Today we cleaned up the cans.  We pulled 39 cans out of the gully.  In all, we reached home with 52 cans, the vast majority of which were Bud Lights.

Today was another nice day for a walk.  Janet was off playing with her friends, so I walked alone.  I got a honk from Mr. Handyman and saw the Salinas Construction truck.  I flung a roadkill-rabbit.   Along the walk, I picked up a Coors six-pack carton, but only found 4 bottles.

Another ball at the KinderCare. 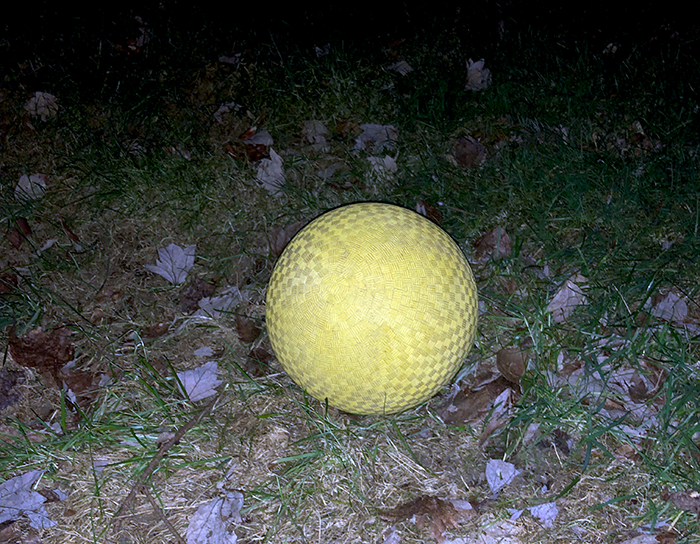 I tossed it back over the fence.  The slow game of catch continues.

Someone lost their lunch.

At the bus stop where the hole in the fence was, the hole is missing.

The city must have fixed it.  There must have been some incident that triggered the caution tape and subsequent repair. 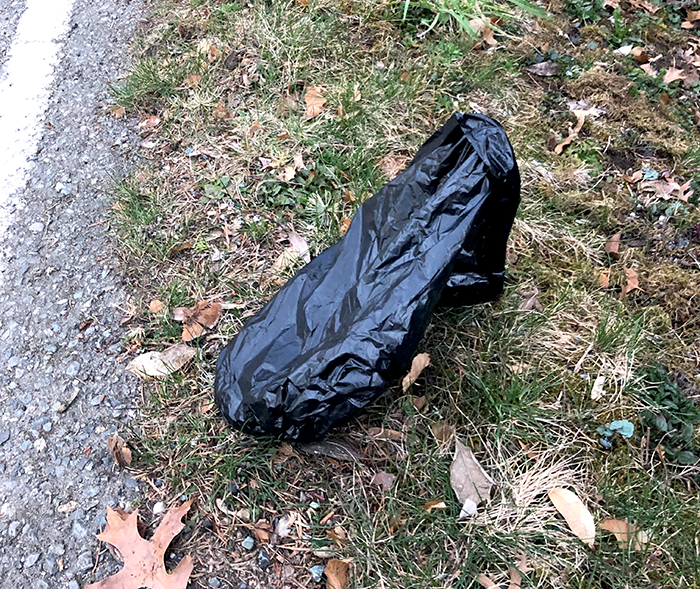 This irresponsible pet owner was too lazy to even tie the bag closed.

At a bus stop, a spare bag slipped out of my pocket and a lady waiting for the bus chased me down to return it.  I thanked her.  When I got home, it was gone again.  Oh, well.  Someone will probably pick it up… NOT.

This was yet another nice morning for walking and we were again greeted by Mr. Handyman and Salinas Construction.  We flung another roadkill-rabbit.  It was in relatively good condition for being dead.

We also flung an opossum.  When we moved it, we found two small baby opossums that were probably in the mother’s pouch.  We normally don’t post pictures of roadkill, but if you are interested, you can see the photo here.  Does this count as one fling or three?

At the party corner of the Park-and-Ride, someone left a mess strewn over a wide area.

We also got another Bud Light can.  The county should really start renting this area out to make some extra money. 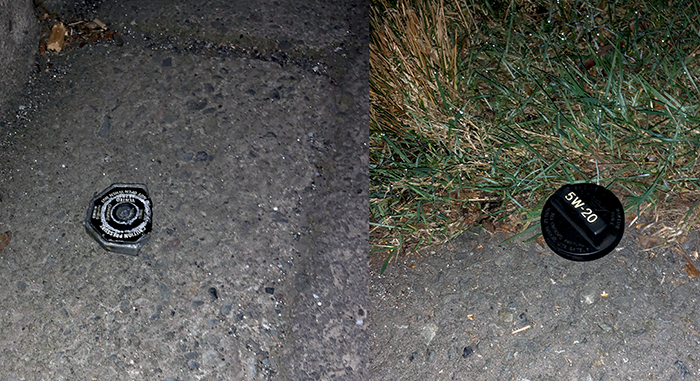 An oil cap and a radiator cap.  If they are from the same car, the owner should find a different place to get their car serviced.

In the middle of Juanita-Woodinville Way, we picked up a telephone book.

We always dread the delivery of phone books because many recipients just leave them wherever they are delivered and we end up hauling them home, mostly waterlogged.  This year, wasn’t too bad. We only picked up about 15 of them.  On the bright side, the plastic bags that the books are in are great trash bags.

Chuck found the bag he dropped yesterday.  It’s a good thing nobody else picked it up.

Traffic and Trash were Friday-light and made for a fast walk.  We got a honk from Mr. Handyman.  We flung a small robin that had been hit by a car.

We found a hat from the Exotic Feline Rescue Center in Indiana.

The hat was pretty beat-up.  We stumbled on this article about a woman being mauled by a Tiger at the rescue center.  Maybe she was wearing this hat.

This toy was outside the KinderCare facility.

It got tossed back.

Only one slice, though.

This is the first one of these we’ve seen. 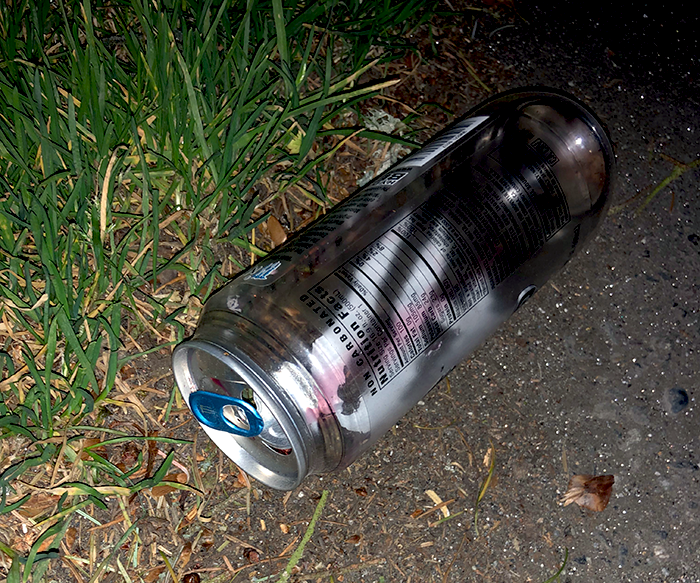 A clear plastic can with an aluminum pop-tab top.  While the world is moving to reduce plastic usage, evidently Monster Energy thinks it’s better than aluminum.

After looking at it for a while, we decided Pablo is smarter than us.

This Saturday, the weather was overcast and warm.  We flung a very flat rabbit and found a lot of McDonald’s trash under the freeway.  We’re unsure if it came from cars on the freeway or Riverside Drive.  We got a very enthusiastic honk from a Jeep driver, first-time honker, we think.

We found surprisingly little trash on our way down the hill to Riverside Drive.  As we approached Riverside Drive, we had a pleasant surprise.  Someone, probably the City of Bothell, picked up our pile of Botts’ Dots road markers.

We had visions of the temporary barricades being picked up at the end of the storm season leaving the piles of road markers.  Thank you, Bothell.

At the Sammamish River Park, we found only one wine bottle instead of the usual two. 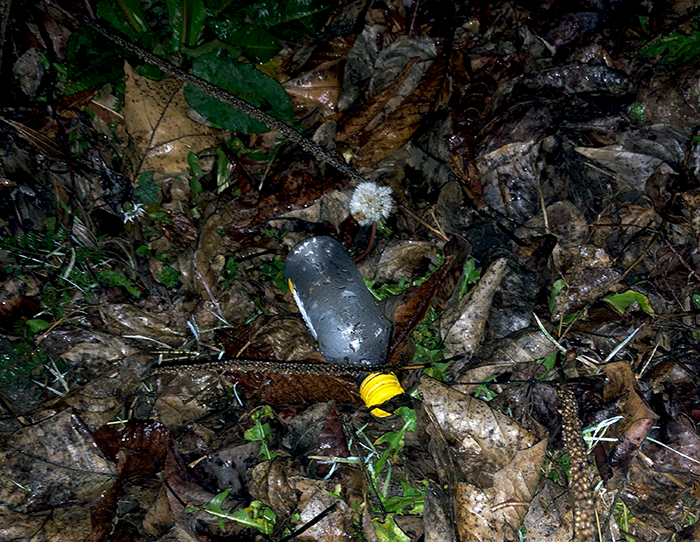 Also, we didn’t see any used condoms.  One bottle and no condoms.  Guess the guy got stood up this week.

Someone dumped their trash along the side of the road.

They had good taste in beer, bad taste in citizenship. 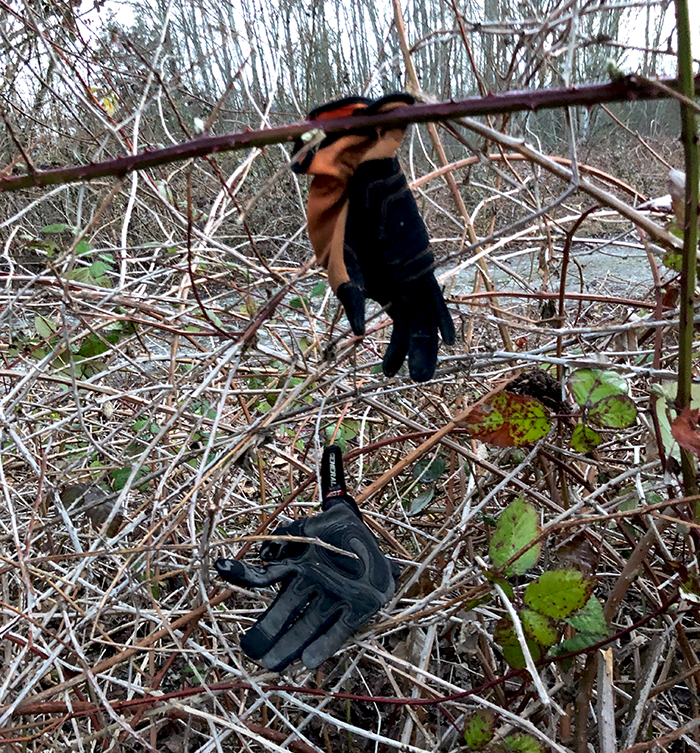 Artistically displayed in the blackberry bushes.  It was a matching pair, but they had holes in them.

The big pile of snow we have been watching is slowly melting. 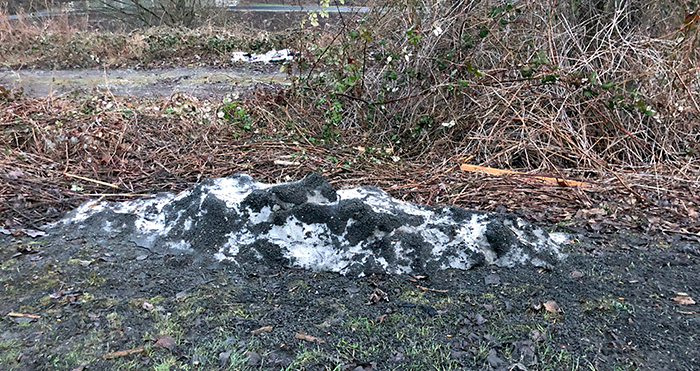 As expected, it’s slowly revealing random trash as it melts as well as pieces of cardboard and wood from the siding company across the street. 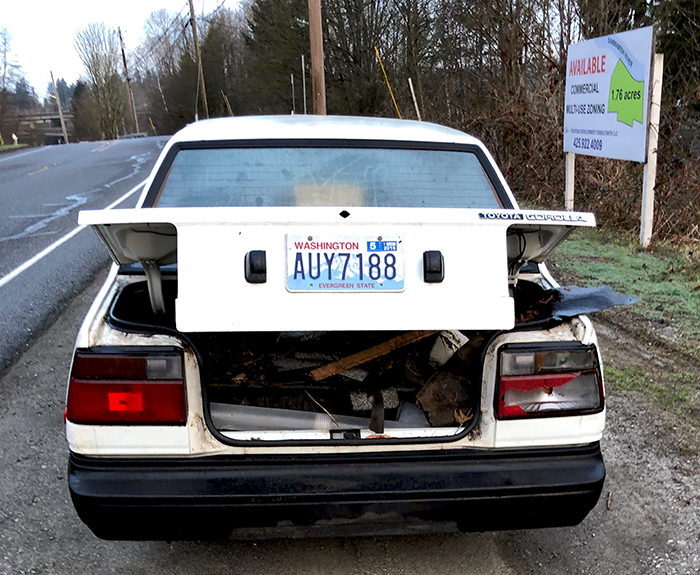 The license expired in May of 2016 and the car was full of trash.  Too big for us to carry home.  It should be reported to the city.

We took a shortcut. 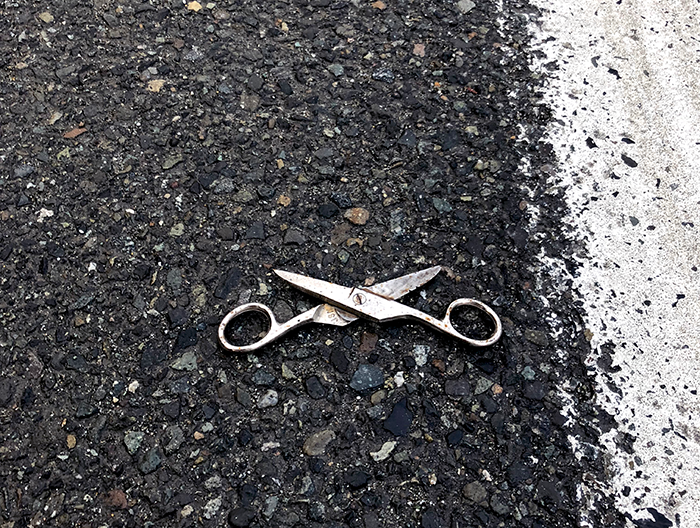 Don’t worry, we didn’t run with them.

In the same vein, 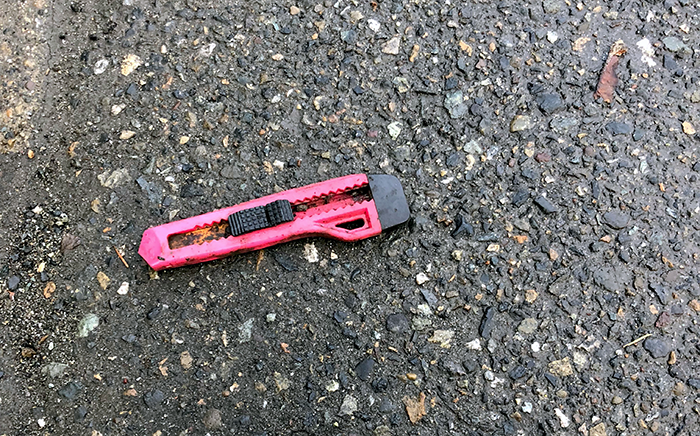 we found a disposed, disposable utility knife.  Too rusty for our found tool collection.

Latex gloves.  Someone better not be encroaching on our territory.

It was unopened, but we still didn’t eat it.

We’ll save it for next Halloween.

We found the missing piece to the puzzle.

Now we need to find the puzzle.