A cool, comfortable walk today with a little rain halfway through.  We got a honk from Mr. Handyman and several waves from drivers.  This is spring break week for many schools and we are always amazed by how much less traffic there is when schools are out.

We’re trying to figure out what this is supposed to be.

We found some missing links.

They could be part of a wrist or ankle chain.

We passed a demised crow.

It was already off the road so didn’t need flinging.

We found the King!

This picture is about three feet tall.  It’s a shame to throw away a perfectly good Elvis like that.  We will check to see if a Picasso is hidden behind the Elvis print.

A traffic cone has been left to cover the short remnants of the sign post.  We’ll see how long it stays.

We found another penny.

Come on, guys.  Pennies are fine, but a little folding money would be appreciated.

This was another cool morning.  It rained for about half an hour then stopped.  We got a honk from Mr. Handyman and two drive-by beeps.

The apartments put out a new sign with balloons.

At the Park-and-Ride, we found a pair of rubber gloves.

We would like to know what people are using these for.  Certainly not picking up trash.

Kind of a hubcap. 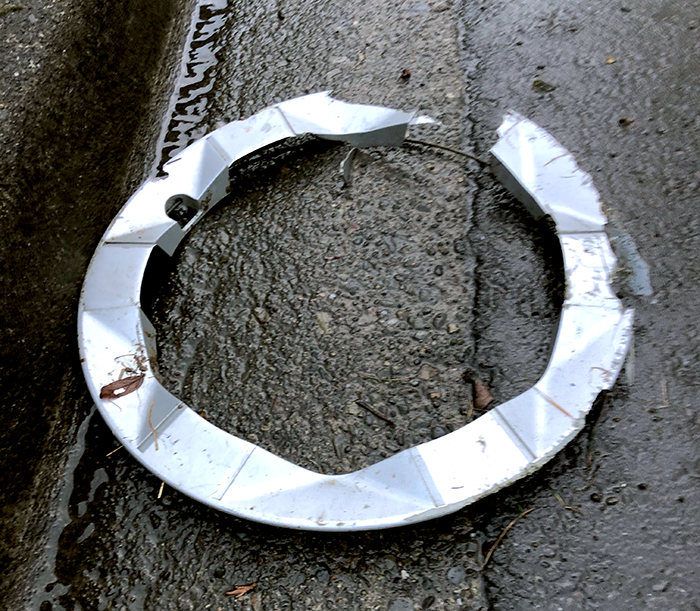 We took advantage of the low spring-break traffic and extended our walk down 100th Ave NE to Simonds Road.  The corner of 100th and Simonds is always a mess and we came back fully loaded with trash.

We’re hoping the owner of it will retrieve it.

Found a tool for our found tools collection.

9/16th deep socket.  We should check, we may have a complete socket set by now.

Someone got flocked at the top of Norway Hill.

No rain this morning and the temperature was a bit cooler.  We got a honk from Mr. Handyman and flung a severely disassembled rabbit.

We found another rabbit scut. 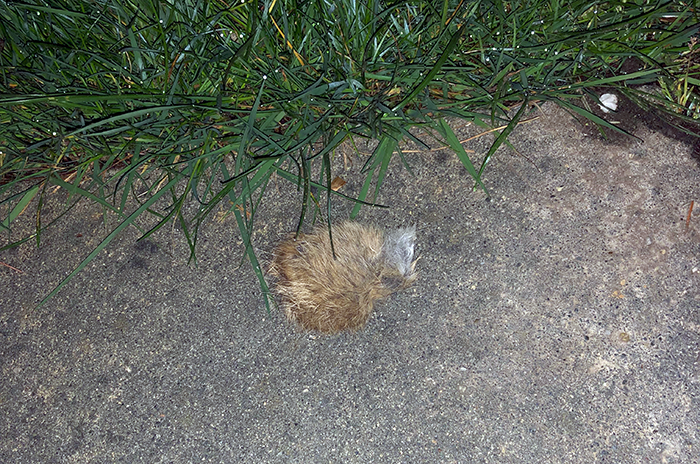 This was not part of the aforementioned disassembled rabbit.  We have found several of these.  It may be that the rabbits shed them periodically.  Still think it would be embarrassing for the rabbit.

Well, this is a little better. 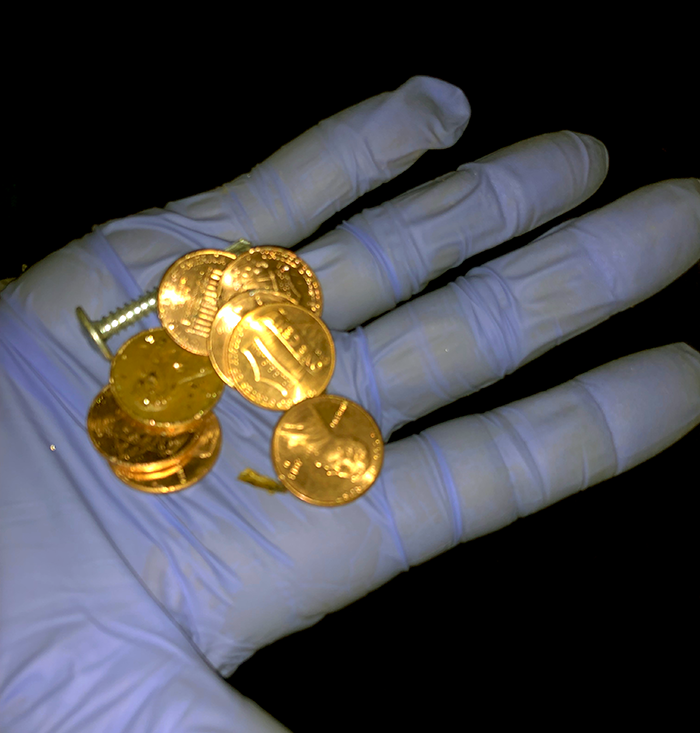 Nine pennies.  Ignore the screw.  These were found in a busy intersection and took several walks across the street to collect them.  Better than one penny, but still isn’t folding money.

It needs a good cleaning.  The stuff on the sign is spray foam insulation.

A matching pair of work gloves near Safeway about fifty feet apart.

Unfortunately, we only returned home with one.

We also got another gas cap.

This was near the Safeway gas station.  It was a third-party replacement cap, so someone is very bad at remembering to replace their cap.

Another tennis ball with no apparent home.

We adopted it.  Dirty but in good shape.

Someone’s playing a bad game of Hide the Salami?

Perhaps it’s the guy who tossed this.

But wait, the FDA has issued warnings of Tainted Sexual Enhancement Products.  Several of the Samson Rhino products are listed.  They contain a hidden ingredient, sildenafil , which is the active ingredient in Viagra.  Wonder what else is hidden in the “proprietary blend?”

This morning we had a light rain throughout the walk and got a honk from Mr. Handyman and another drive-by honk from an SUV.

At the beginning of the walk near the Tolt Pipeline, we found some small balls.

We think they might be paint balls for paint-ball guns but we didn’t pop one to see what was inside.

At the park-and-ride, we saved someone from a flat tire.

We found another penny.

This one was on the freeway off-ramp.  Lots of pennies this week.

The McLitterers left their mark.

It had the standard unused contents.

We had our grandkids stay with us overnight, so Chuck walked alone.  It was a nice morning with no rain for once.  I got a honk from Mr. Handyman and a nice “thank you” from a guy at a bus stop.  I flung a duck on Juanita-Woodinville Way.  I think it was one of the two we saw swimming in the ditch last week.

Yet another rabbit scut. 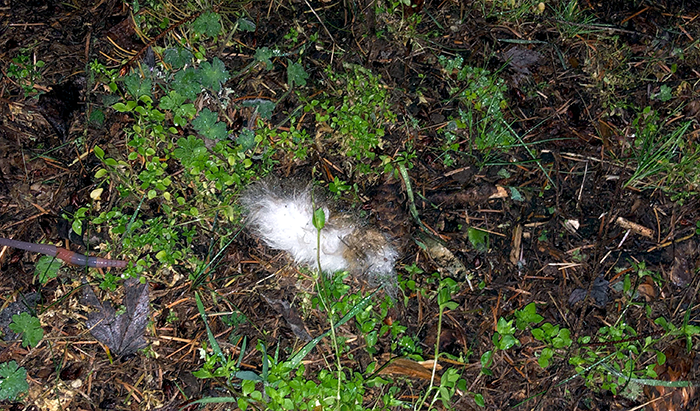 Natalie lost or tossed her homework.

Based on the picture , I suspected it was going to be a paper against people wearing fur coats. “It takes up to 40 dumb animals to make a fur coat.  But only one to wear it.”   However, it was a paper about advertising and hidden persuaders.

April 1st.  I wonder if her dentist has a sense of humor?

A wine minibottle at the Safeway party corner.

Not much of a party.

I found a skewer. 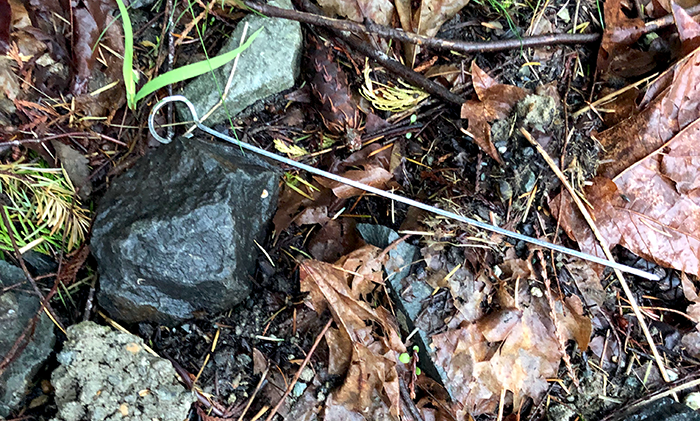 Walking alone, I did feel a bit askew.

This was a blustery morning for our walk.  It was 45F, breezy and rained the entire three-and-a-half hours of our walk.  We flung two more rabbits.  We saw the lady who gave us the Caffe Ladro gift card last Saturday.  She drove by, waved to us and yelled “Thank you!”

At the Sammamish River Park where we’ve been finding wine bottles and condoms.  Today we didn’t find either.

Instead we found a baby’s pacifier.  Is this the rest of the story?

We found another glass sphere.

This is the second one we’ve recently found.  They may be marbles, but are small.

We put another dying balloon out of it’s misery.

And we found another fork to add to our growing found silverware collection.

We found this in the gutter.

We found a large marijuana bag with something inside.

It turned out to be a microfiber glasses cleaning cloth.  Probably to clean the marijuana smoke off their glasses.

At the Bothell Park-and-Ride we found what looked like a perfume bottle with a USB port.

When we examined it at home, we found it was a vaping device, Aspire SkyStar Revvo 210W.  $60 new.  This one still works and it uses two 18650 batteries like we use in our flashlights.  Score!  It is a pretty complicated device and is totally customizeable.  Here is an indepth review if you want to kill 15 minutes.

Then toss the note out the window.

Well, it’s been almost four years since we started walking.  Over 6700 miles and 15 million steps later, we reached Step 2.

Is this a twelve-step program for trash walkers?