This morning was a bit cooler and started out dry.  About half way through the walk, it began to mist and by the end it was a light rain.  We got a honk from Mr. Handyman and two “thanks” from passers by.  We flung a flat rabbit.

We found a shiny nickel.

The money keeps rolling in.

On the way toward Safeway, we found the proverbial “Bottomless Coffee Cup.”

Then on the way back, we found the bottom.

Does a monkey need a ruler? 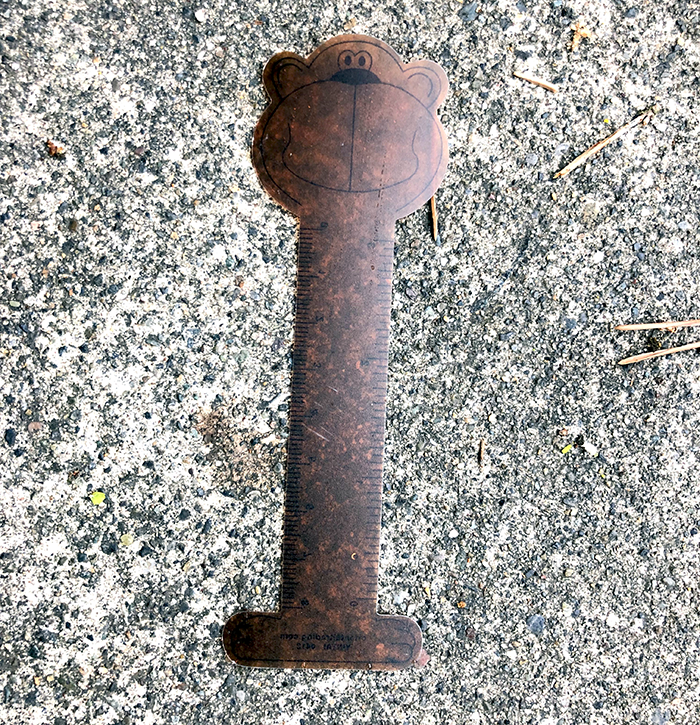 This is a bookmark/ruler from the Oriental Trading Company.  $6.69 for 48 assorted zoo animals.  “Zoo Animal Ruler Bookmarks. These 5 1/4″ vinyl ruler bookmarks are a classroom necessity!”  Really?

A user manual for a pineapple.

No user manual, though. 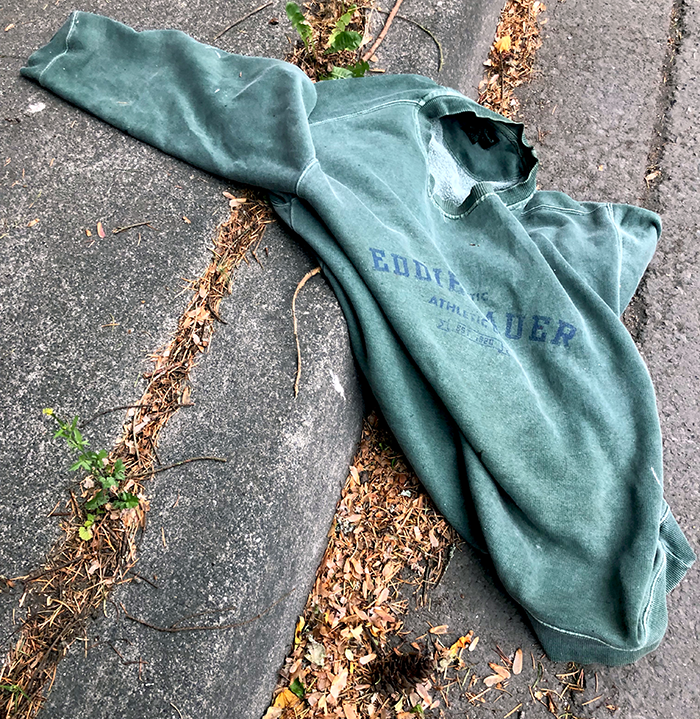 In fair condition.  It may be a keeper.

This kid’s teacher is a tough grader.

It looks okay to us, except for the dyslexic teacher’s grading.

This was another cool morning, but it was dry.  We got to the park-and-ride before the bus cleared the folks, so we wandered through the parking lot until the bus came.  We waved to Mr. Handyman who was turning onto the freeway as we reached the corner.

We did find another dime.

It was Canadian, though. 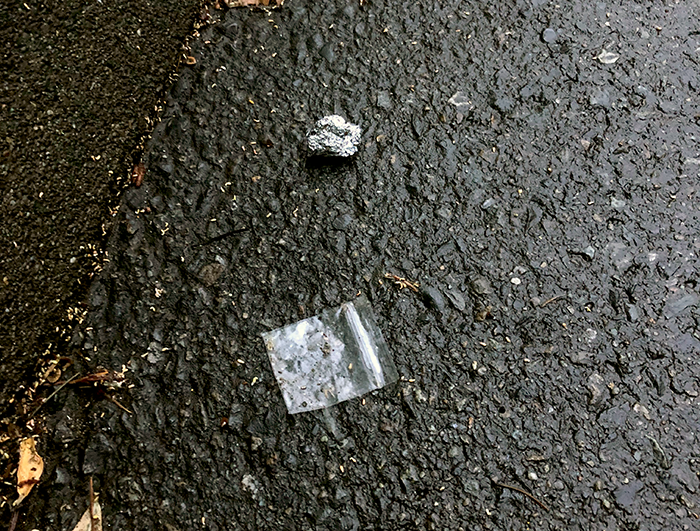 We found a dime bag and a ball of aluminum foil.

We picked up some discarded ear buds.

We got a marble and a plastic ball.

The marble was in good condition but the ball was shot and got recycled.

This one was in good condition.  It had not been run over at all.  $19 for a pack of three.

We scarfed this scarf.

This had been run over and torn.  It got tossed.

This was a nice morning to walk.  The temperature was a bit warmer and there was no rain.  We did get a honk from Mr. Handyman and flung a rabbit.  We are not finding much trash these days because much of our routes are overgrown by weeds.

We did find more money! 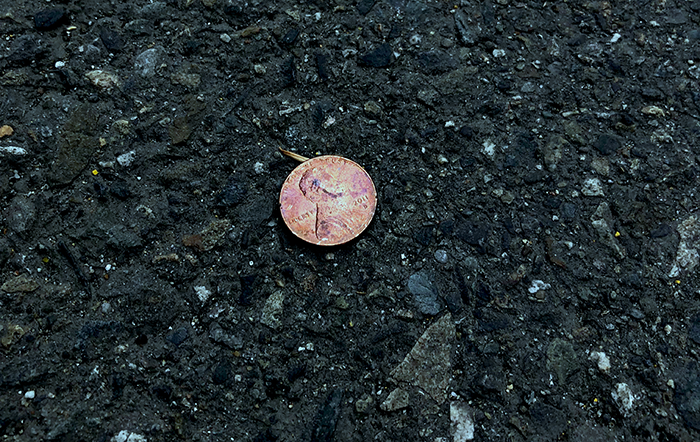 This is the fourth walk in a row we have found money.  We’re on a roll.

Of course, we also picked up a rubber glove.

There was nothing on the card that indicated what type of business Conversion Logix is.  It turns out it is a digital advertising agency.  Go figure.

A receipt from Black Market Skates. 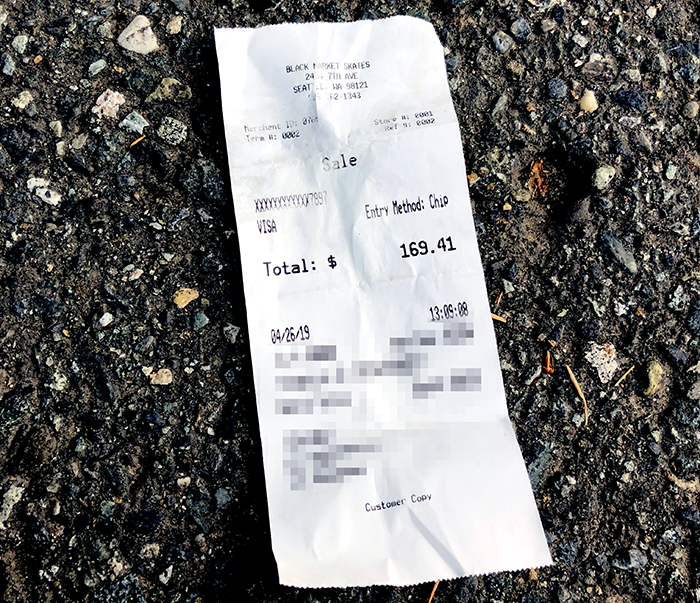 That’s a lot of money to spend on skates.  Certainly not a cheap skate.

Two days ago, we found the monkey bookmark from the Oriental Trading Company.  Today we found the whole menagerie. 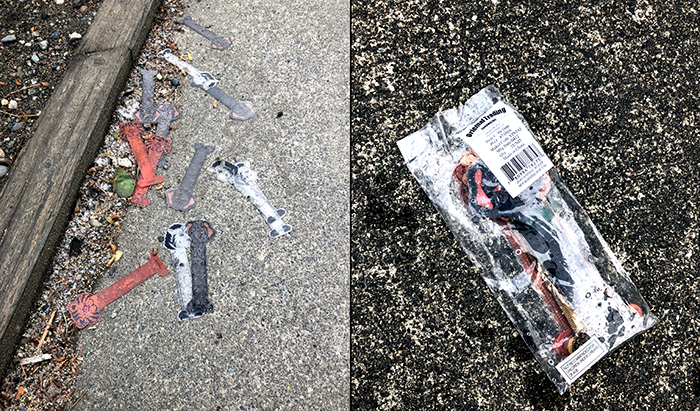 We found a bunch still in their cage, but several had escaped.  It looks like more stolen merchandise to us.

Someone dumped a shopping cart over a guard rail near Safeway.

There was an unused paint roller with it.  It looked like it could use a paint job. 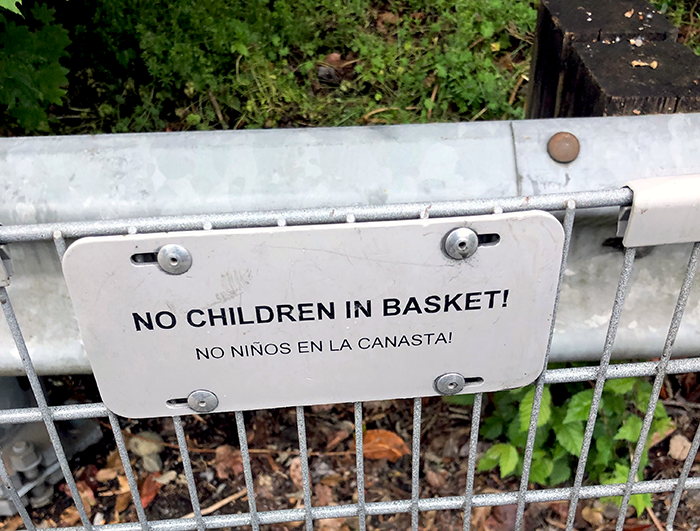 We think this says that kids are not allowed to play Canasta in the shopping cart.

We hauled it back to Safeway.

We always feel self-conscientious rolling carts back to Safeway.  Seattle shut down a large street people camp two days ago.  We felt like displaced people this morning.

This was a warm and dry morning and we got a wave from Salinas Construction and a verbal thank-you from a passing motorist.

We picked up six cents at the park-and-ride bus stop and a quarter in an intersection.  A total of 31 cents.  This is a record of finding money for five walks in a row.  Woohoo!

They also mowed much of the hidden trash making a mess to pick up.

At the park-and-ride, someone dumped a soiled baby diaper and onesie.

Whoever did this is going to be a great parent.  Not.

We found a small jar with marijuana residue.

It also contained a cigarette paper.

With Hemp Oil from Veritas Farms.  Maybe it makes you smile more.

Someone got flowers and balloons, but not the car.  It’s always there.

Spring, the start of sports season.

And hundreds of signs that will be neglected until they fall and we harvest them. 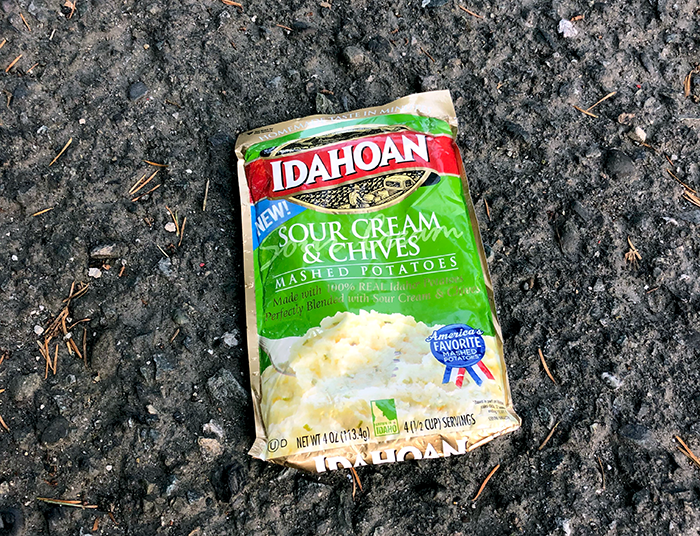 We found an unopened package of mashed potatoes.  We were just discussing with some friends that they were told Washington grows more potatoes than Idaho.  But we found this statistic:

So Idaho is still number one.  It’s a good thing, otherwise they might need to change their license plates.

A flat hedgehog.  No, we didn’t count it as a fling.

The morning started off dry but as we reached the top of Norway Hill, we climbed into a misty low-flying cloud.  We found a preflung squirrel that was already off the road, so we didn’t fling it.  We got a honk from Mr. Handyman and a wave from the Costco delivery guy.  We also got a verbal thanks from a driver at an intersection.

At the KinderCare we found what we think is part of an escaped toy. 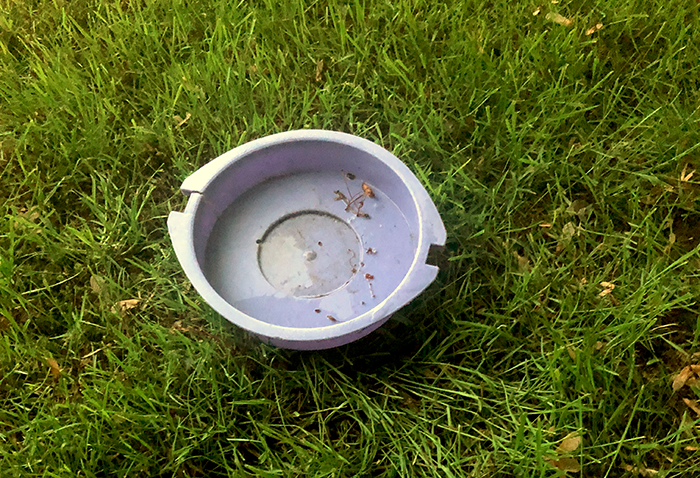 It got tossed back over the fence.

Also found a couple of these outside the fence.

We didn’t throw them back.

We picked up a microscope. 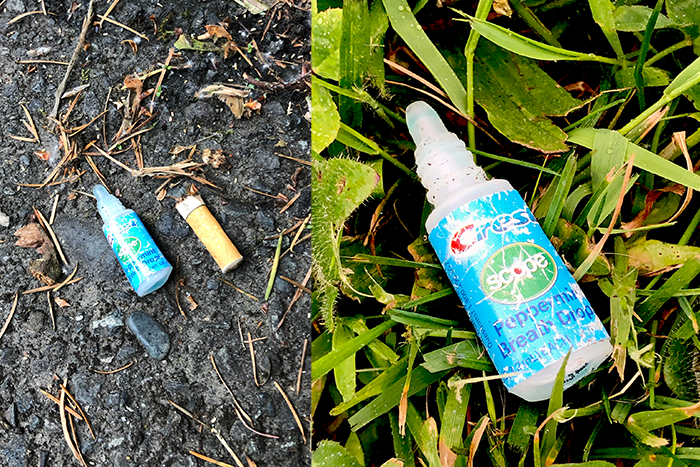 Another spoon for our found silverware collection.

Unlike most utensils we find, this one is in perfect condition.

In the same area as the spoon, we found a bag with marijuana residue in it. 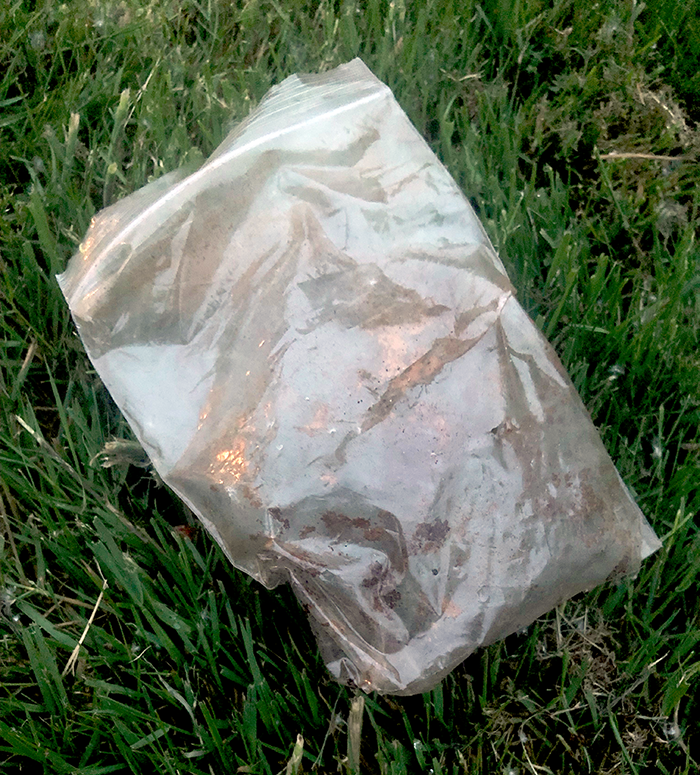 Maybe the user wanted to be spoon-fed?

We found these all in one bag. 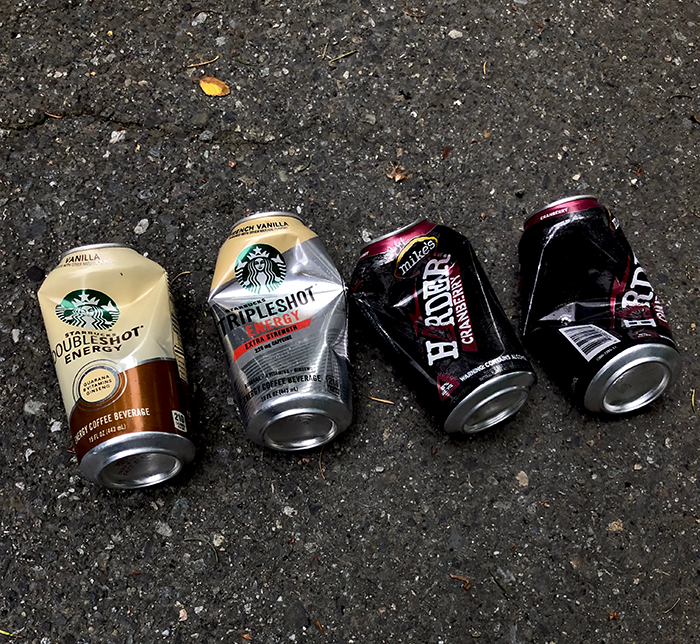 Someone lost a button.

It had some writing around the edge, but we couldn’t read it.  Also, it has what looks like a date on the back.  We tried to find more information about it on Google, but we must not have pushed the right buttons.

As we passed the 7-Eleven, we saw a Waste Management garbage truck back in to block a Recology garbage truck.

We thought we were going to witness a real dirty fight.  But to our disappointment, the WM guy went into the 7-Eleven, probably for a cup of coffee.  He didn’t even give him a dirty look.  Guess they didn’t want to air their dirty laundry.

Not.  We thought we’d found another coin, but it turned out to be a shiny washer.  This broke our five-day, money-finding streak.  Janet said she carries $5 of “mad money” she could drop.  I told her we wouldn’t stoop so low.  Actually, we would, but we didn’t.

It was cool and overcast for this morning’s walk.  We were out for about three-and-a-half hours, so we were walking slower than normal.  For some reason, we saw a lot of squirrels today, most of them at one location where we saw a total of nine different squirrels.  Maybe someone was feeding them.  Oh, and we flung a small squirrel.

Last Saturday we dragged a box of several empty beer bottles out of the bushes and left it so we could pick it up later.  When we went by to pick it up the next day, we were pleasantly surprised that someone had picked it up, then we joked that maybe they just put them back in the bushes.  Guess what?  They did. 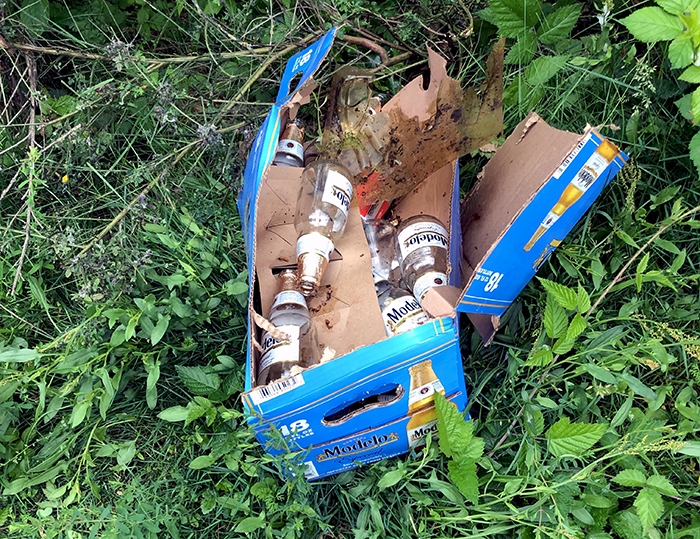 We pulled them out again and this time went back after our walk and picked them up.  They are now in our recycling.

Yesterday, we found a microscope.  Today we found three. 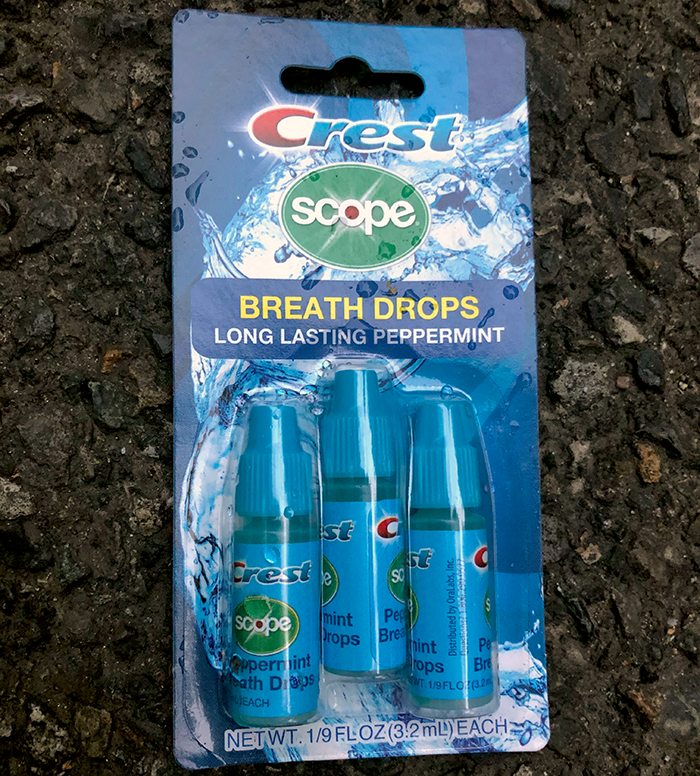 These are unopened and were in a bag with an empty beer can.   The guy probably bought them with the beer, drank the beer and forgot about the breath drops.

We found these close to each other.

Instructions on training your cat to wear a harness and big cat flea treatment.  This must be one out-of-control cat.

Thank you for shopping with us.

And littering with us.

Someone left us their dinner under the freeway. 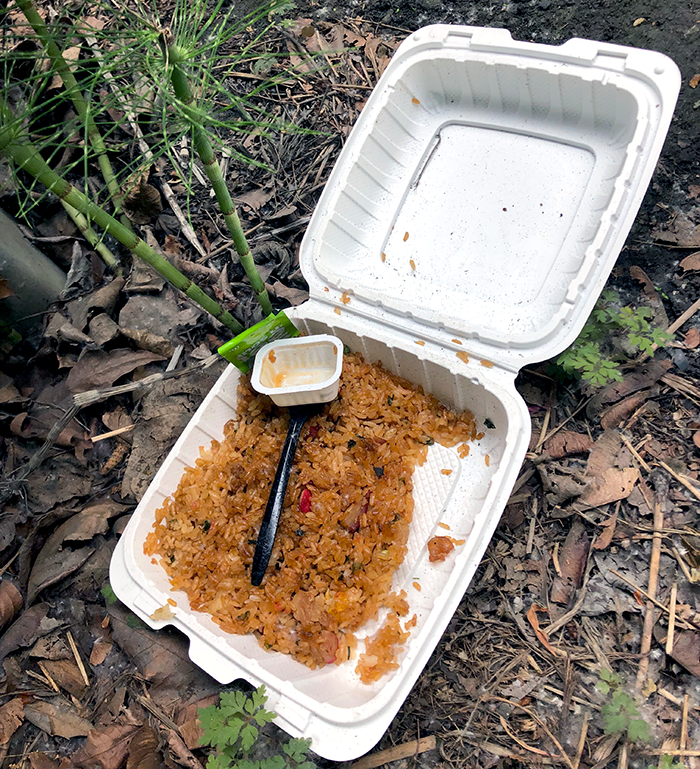 They ate all the good stuff, though.

This traffic cone has been here way too long. 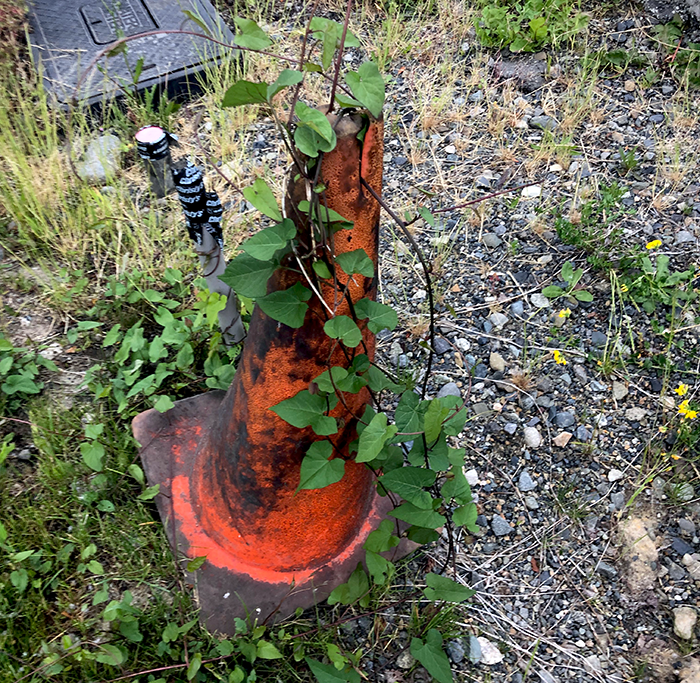 We picked up a lot of different realtor business cards scattered along Riverside Drive.

Either someone is shopping hard for a realtor or they dumped them after an open house.

We found an emoji.

But it wasn’t an animated one.

Readers for a one-eared man. 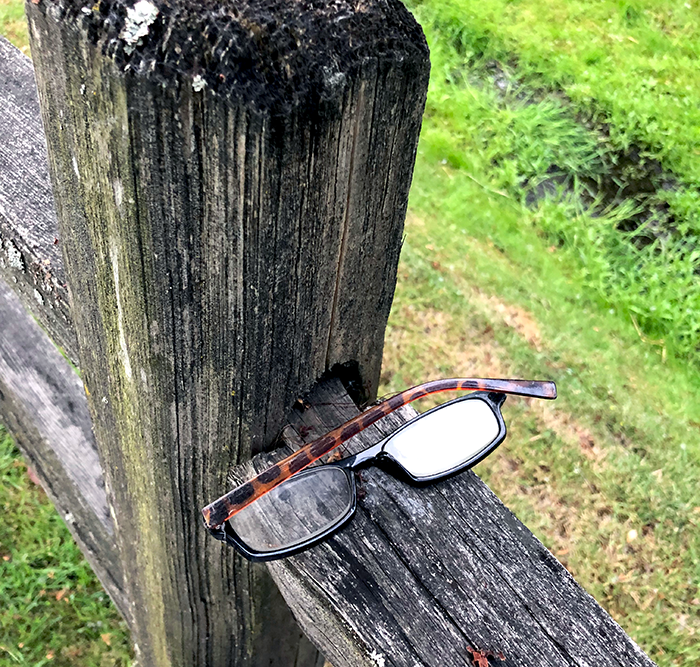 And a cuff link for a one-armed man. 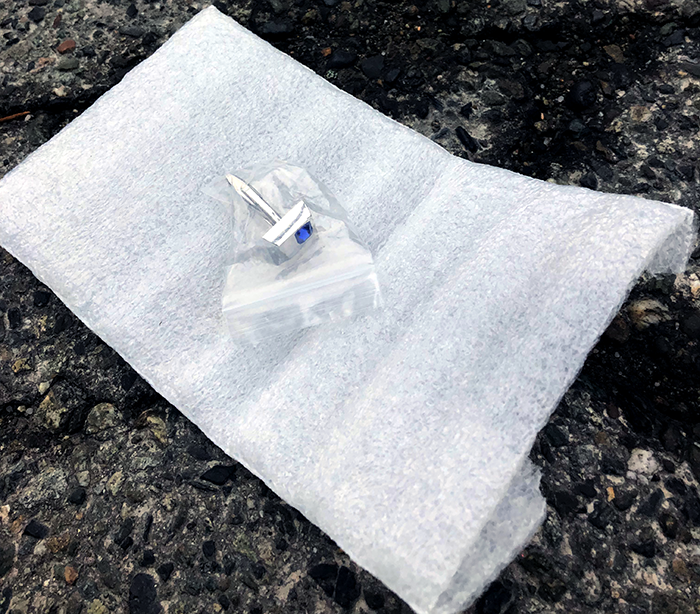 We looked for the other cuff link but couldn’t find it.

We find a lot of empty Copenhagen cans, but this is the first Red Man pouch we’ve found.

We found two empty pouches about a mile apart.  This guy’s a fast chewer.

We find a lot of these air fresheners.

We surmise they are used by smokers to try to cover the smoking odor.  This guy tossed his air freshener out with his butt.

We picked up another doggie poop bag outside the apartments.

The serial poop dropper is still at it.

Drugs.  We found this small container.

When we got it home, we found a small amount of very old marijuana in it.

Someone tossed out a small dope torch.

Nearby we found another cracked crack pipe. 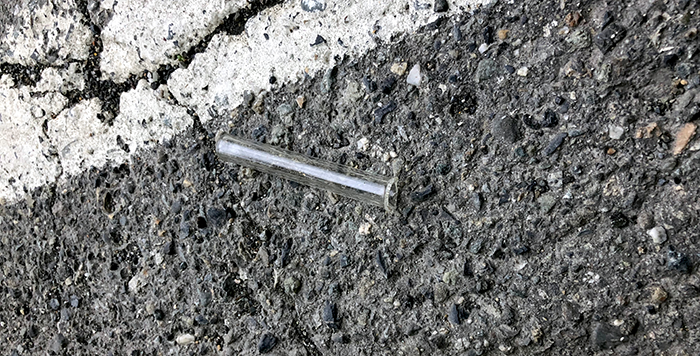 Actually, it was totally broken.  Maybe that’s why the guy tossed his dope torch.

Last week a guy from the Securite Gun Club came out and thanked us for keeping the area clean. 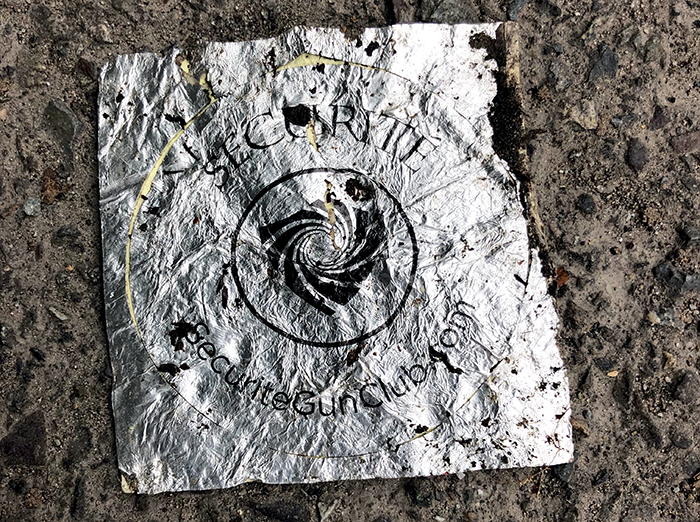 This week, we picked up one of their stickers.

And, finally, this is just creepy.

But this is creepier.