This morning was 33F and clear.  We got a drive-by thank you from a pickup across from Safeway, but no money and now roadkill.

Along Juanita-Woodinville Way, we found a discarded Extenze package. 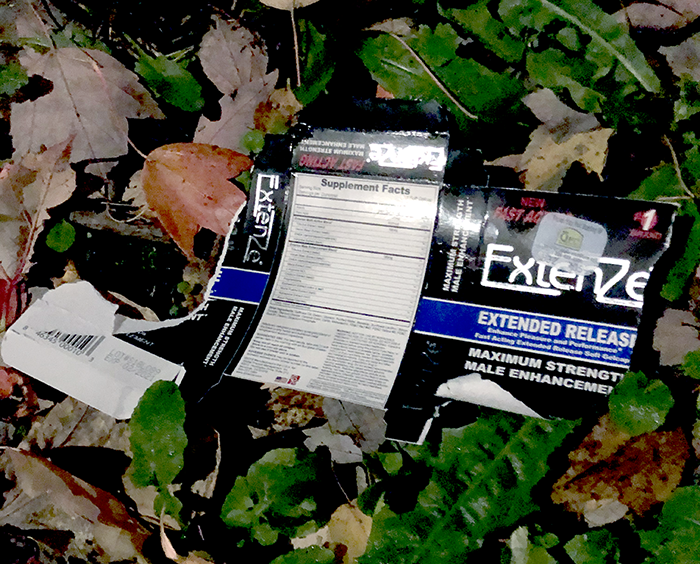 $25 for fifteen pills at Rite Aid.  Do they work?  Evidently so.  According to this FDA warning, it contains the undeclared ingredient “sildenafil, the active ingredient in the FDA-approved prescription drug Viagra.”

Someone is saving a spot for the next Independence Day Parade along Juanita-Woodinville Way.

Someone should tell them Independence Day is still about nine months away.  And there is no parade along this route.

We began picking up random sheets of paper, then found the source.

Someone tossed out a notepad.  It had two used pages.  “People tell me I’m bad at my work.”  Well, you litter too.  Also this picture. Interesting.  Do you work as an artist? 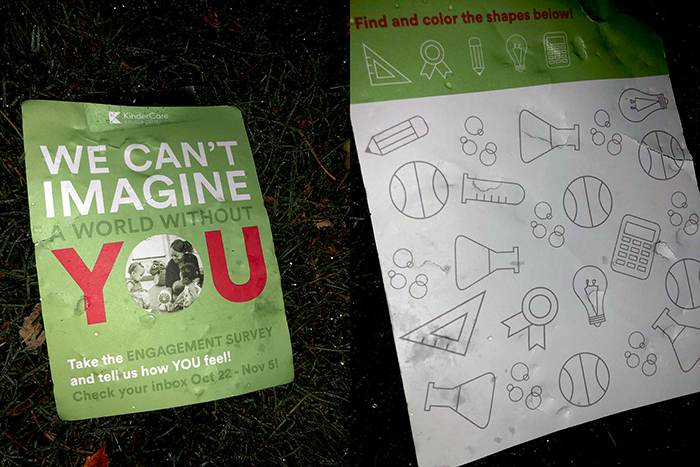 “Find and color the shapes below.”  What kind of survey is this?  Hint:  Number four is a trick question.  There are two light bulbs.

On our outbound trek toward Safeway, we found a discarded pet carrier.

With it was a pair of shorts, a Mariner’s baseball cap and a pair of red shoes.

The shorts were Xersion branded, quite common. 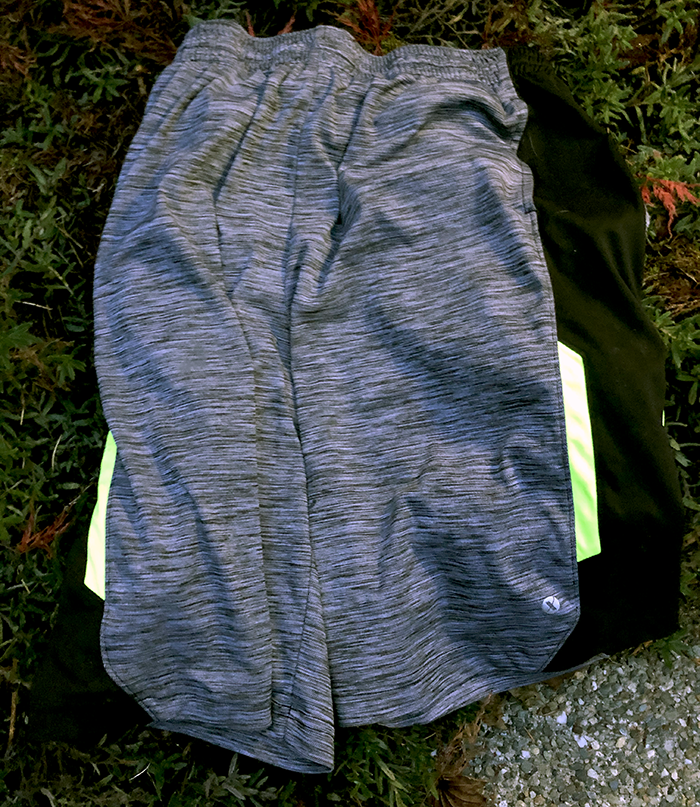 The shoes are Supra Skytops.

Pretty pricey, and certainly not our style.  Someone at Goodwill will get a deal.  We left these items at the corner to pick up with the car later in the day.

On our way back from Safeway on the other side of the street, we found some “beer.”

One bottle was missing.  We get it.  After tasting one bottle, we would have left the rest also.  It was near the pet carrier, so we left the beer with the carrier for later pickup.  However, when we returned with the car, the carrier and other items were there, but the beer was gone.  No doubt we’ll find it again with two bottles missing.

The Norway Hill litter turf war is heating up.  Today we found a McLitterer’s bag.

It had the standard two clean pancake platters and unused utensils and condiments.

Then, a little farther up the hill, the Taco Time Tokus. 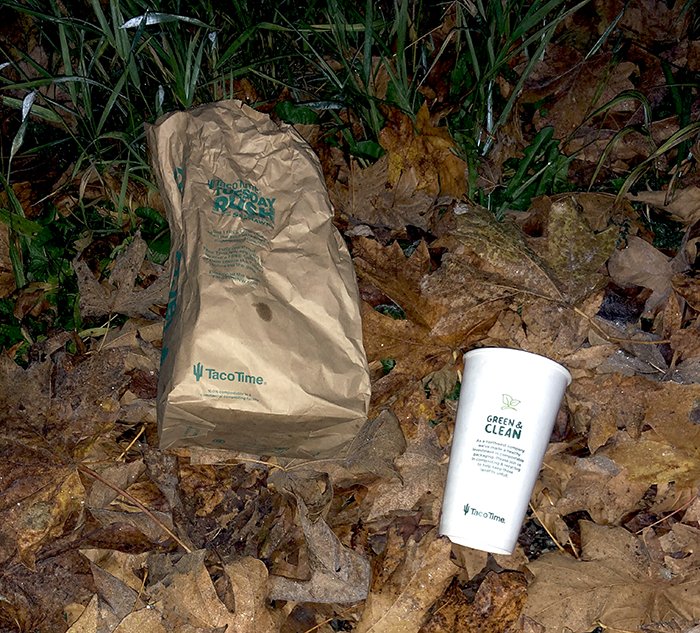 Things could get nasty.

Another cold, clear morning with a lot of bulky trash, but little out of the ordinary.  We did remove a roadkill squirrel from the street.

Near the 7-Eleven, we found four or five food cartons including this one.

Pure Protein Bar.  This is obvious false advertising.  The bars are 50 grams each and only 20 grams of protein.  They should change the name to “40% Pure Protein and 60% Pure Other Stuff.”    Ok, it may need some marketing spin.

According to the Nutrition Facts, 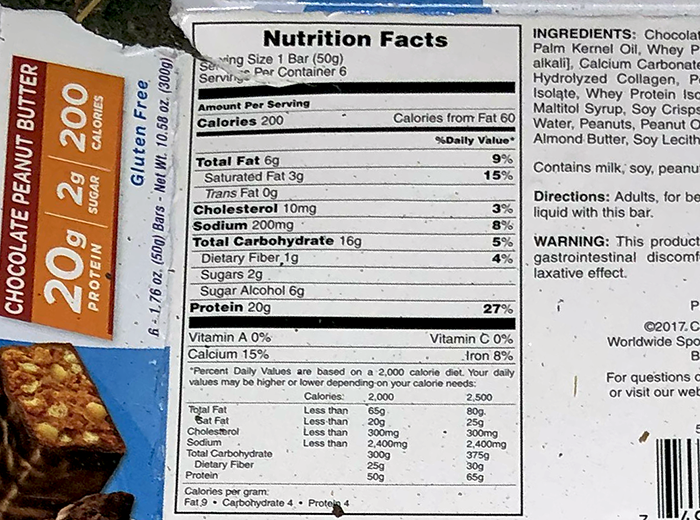 Their survey participation rate is not looking good.

We have certain rules we walk by.  No walking if,

Today it was 29 F, so we slept in.  But we did dream about feeling guilty about it.

Since we missed yesterday, we did the Safeway Route on Thursday.  It was a bit warmer at 32F, not too uncomfortable.  We didn’t find any money or any roadkill.  Also, no honks.  Maybe we should have slept in again.

We did pick up a Washington State Lottery Scratch-and-Lose token.

They supply these for when you’ve lost your last dime to scratch the tickets.  This week, we were having lunch and watched a guy drop $40 in scratch tickets.  He did win back about 4 tickets per twenty, but no big win.  They do say the lottery is a tax on the stupid.  Okay, we admit we’ve purchased some lottery tickets.  But only when the pot is really big so our chances are bigger.  At least that is what I remember from by Probability Class.

This morning we saw a big pumpkin.

It was about two feet in diameter.  We can verify there was frost on the pumpkin.  It did, however, have an enormous schwanzstucker.

A thoughtful person left us an old-fashioned glazed donut, one of our favorites. 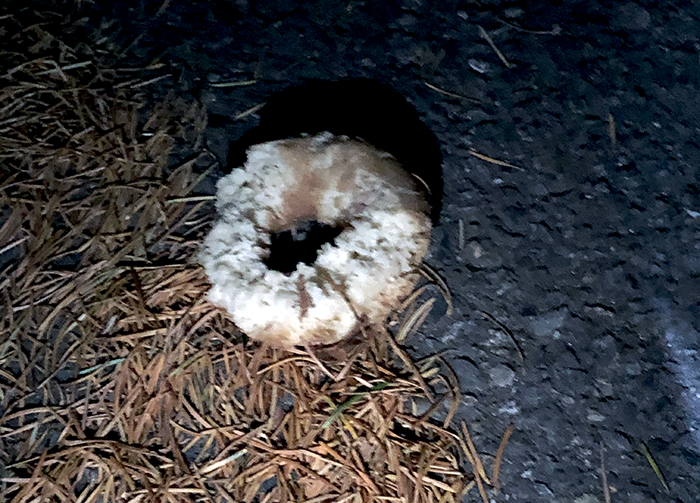 Unfortunately, it was the early squirrel’s favorite also and he beat us to it.  We’ll fling him someday. 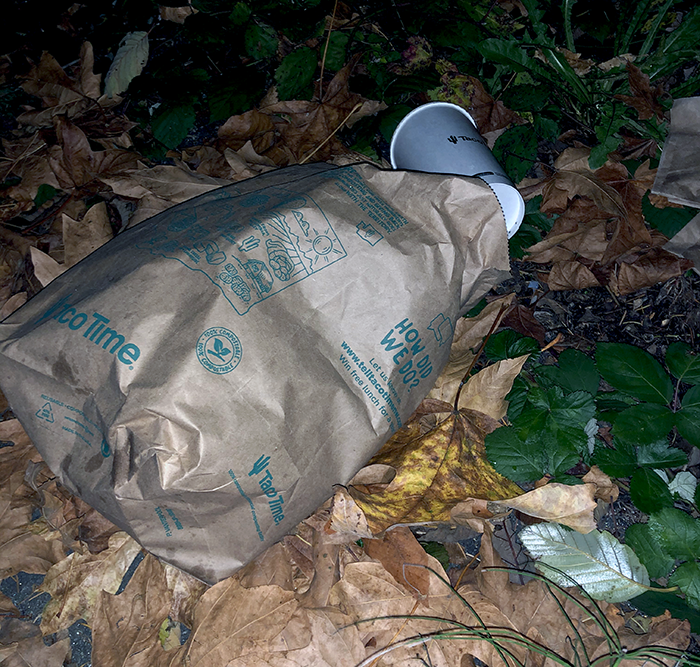 The fallen soldiers of the Taco Time Tokus and the McDonald’s litterers.

This was not the McLitterers, but some of their minions who defended their honor with the Taco Time Tokus at the gates.  Such drama.  Next week we are scheduled to pitch this series to HBO:  “The Game of Throwns.”  We see Emmys in our future.

Mirror, mirror on the ground,

who’s the fairest ones around.  Well, duh, obviously us.  Uh, wait, this is a rear-view mirror…

We’ve complained a lot about our low (very low) walking wage.  We are toiling for over two hours five days a week and four hours on Saturday, and we seldom find more than a dollar per week.  Today we found this McDonalds application.

Glad they told us to only circle one on the last question, though it is an ambiguous question. Eighteen what.  Years? Yes.  Decades? No.  Well, maybe.  Can we make that Yes, No or Maybe?

It was a welcome bit warmer this morning at 34F.  We found no money and no roadkill, but got a nice drive-by ‘Thank You’.  On Norway Hill, we didn’t find McDonalds or Taco Time trash.  Could they have negotiated a truce?

At the 7-Eleven, a guy was getting gas intercepted us and said he’d been seeing us for the past couple of days. 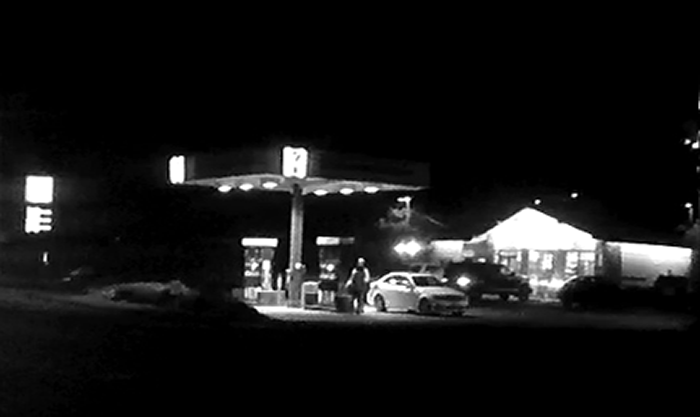 Uh, Okay.  We’ve been walking this route Monday through Friday between about 5:30 and 6:30 am for the last four years.  Perhaps he just remembered to change his watch from eastern time.  He did thank us for picking up trash, which we greatly appreciate.

This was the morning after Halloween and, as expected, we picked up several candy wrappers.  But someone got ahead of himself.

A 3 Musketeers candy bar.  Ok, it’s a mini and the “3” is missing.  According to Wikipedia, the Three Musketeers consisted of,

Ok, so there are four musketeers, not three?  We didn’t read the books, but in the movie, we don’t remember them shooting muskets, just using swords.  There were also the Mouseketeers, they didn’t use swords or muskets.

Near the center island of Juanita-Woodinville Way, another needle.

At least they had the cap on.

We checked.  It wasn’t one of ours.  It probably belongs to that Elderly Couple that has been invading our turf.

We found something that is really useful to us.

Finally, we found a prepaid cell phone in pieces.

When we put it together again and charged it up, it worked.  After reading some of the emails and messages, we returned it to a Verizon Store.  Not something we wanted to deal with.

Another cold, clear morning walk.  There seemed to be more traffic than usual for a Saturday.

Strewn along Riverside Drive we found some contents of Brandon’s wallet. 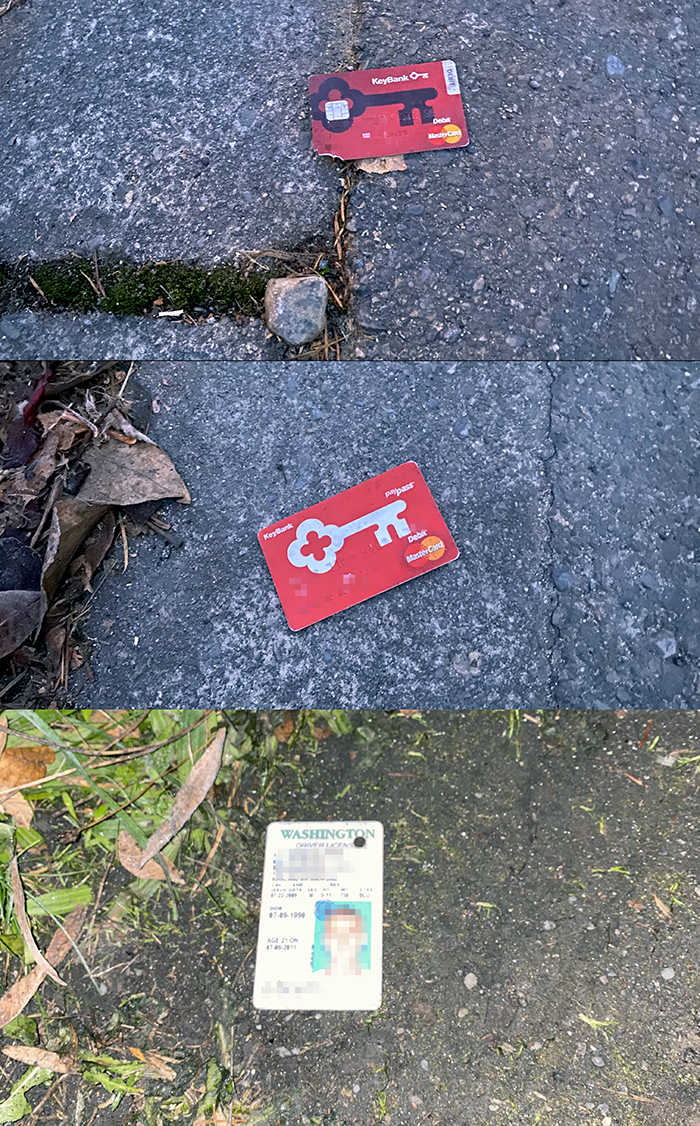 Whoever took/found the wallet discarded the useless items.   All three were expired.

We found a USPS Failure-to-Deliver notice.

Guys, it’s a PO Box.  It’s one of those little numbered cubby-holes in your building.  In fact, you probably put this notice in it.

Well, we haven’t seen any so far.  But it is a tall order for a politician.  “Each congressman has two ends, a sitting end and a thinking end. And since his whole success depends upon his seat, why bother, friend?” – Chad Mitchell

We saved someone from a big flat.

A twelve-inch nail.  We’ll hang onto it, but we’ll need, what, a 4-foot hammer to use it? And we don’t even want to think about bending it.

We had a banner week in gloves. Fifteen gloves, and not any suitable to send to Goodwill.

We found a kid’s homework. 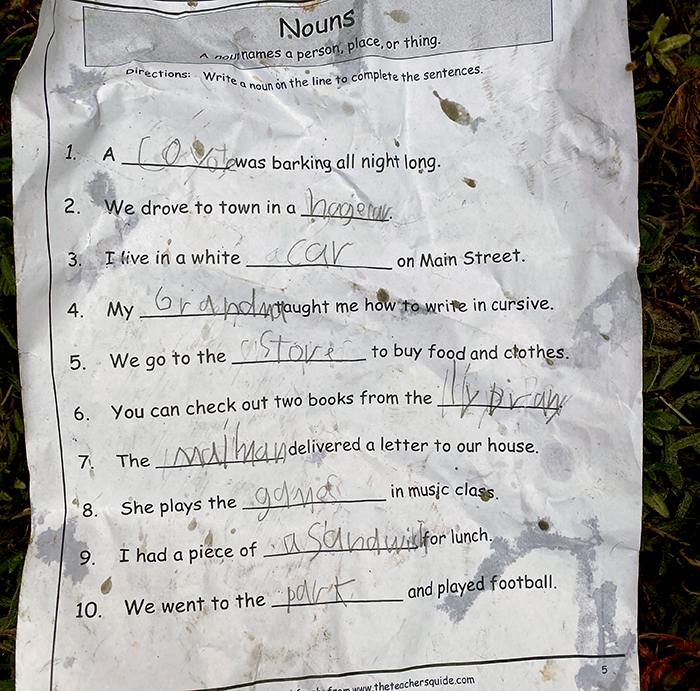 The Lime eBike is still in the ditch.  The GPS battery is probably shot.  Wonder if it will decompose like a raccoon?

By the apartments on Woodinville Drive, we often find Hurricane cans.  A gift from ANHEUSER-BUSCH, 25 fluid ounces at 8.1% ABV.

When we shook out the contents, some beer and six slugs came out.  The slugs were dead.  Or maybe they were in a drunken stuper.  Either way, they were moving slower than, well, a slug.

The first one we found a few years ago, we followed the suggestions on the Internet to return it to the licensing agency.  They told us they gave them to the Boy Scouts to recycle.  Now we cut out the middleman. Into the recycle.

We found another tool for our collection.

A screwdriver with a flexible shaft.  And not-so-flexible handle.  We kept it anyway. 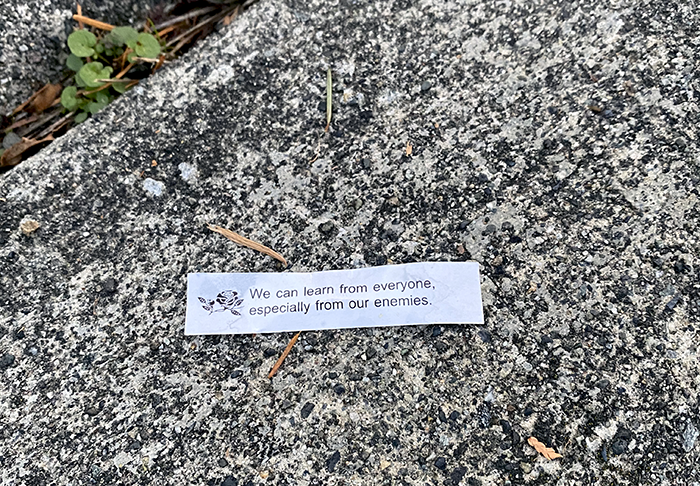 “We can learn from everyone, especially from our enemies.”  Okay, we can learn to litter from ours.  This is one of those “fortunes” that doesn’t make sense when you add “in bed” after it.  Or does it?

Someone dumped a tire by the side of the road.

We considered coming back with the car to take it to our tire store for recycling.  However, it was filled with cement and was used for some type of stand.  We’ll report it to the City of Bothell crew.

Under the freeway, we found a Lilly Humalog KwikPen insulin shot. 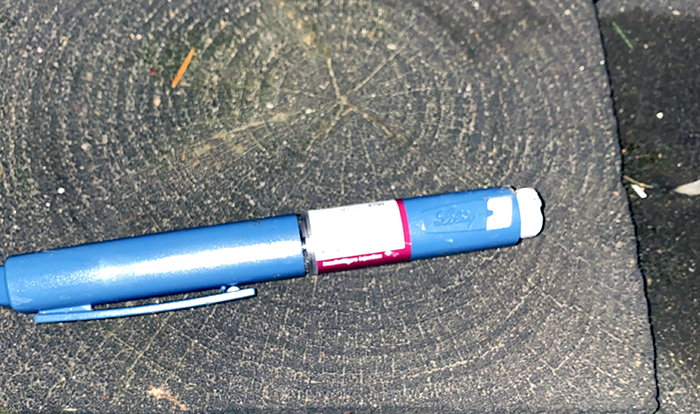 The site states to never put it into an artery or muscle.  This sounds like something I had in the Army, Atropine, for nerve gas attacks.  They warned us to only use it if a nerve gas attack was in progress, otherwise it could kill you.  This sounded like a lose-lose situation.

It was appropriately located near a fire hydrant.

There have been a couple of vehicles on Woodinville Drive that have occupants residing in them.  It doesn’t matter to us, except that they leave trash around their vehicles.  A few months ago, the road was resurfaced requiring no parking along that stretch.  The vehicles moved down the road into Woodinville, out of our territory.  Evidently, Woodinville cracked down on them because they are now back in our territory.

The camper on the pickup and the Cadillac behind it are one pair and the motorhome farther down and the car behind it are the second pair.  Again, we are OK with it as long as they don’t trash the area.  This morning we did find some trash behind the pickup truck.