Today was another mild, foggy morning with no rain.  We got a few waves but didn’t find any roadkill or money.

But we did find Bob the Minion!

Twelve bucks at Walmart.  Does that count?  Bob is easy to identify because “His cute face features one green eye, one brown eye and a mischievous little grin.”  The grin doesn’t look that mischievous, but he definitely has one green and one brown eye.  After a bath, he cleaned up well.

Another loser at the State Lottery. 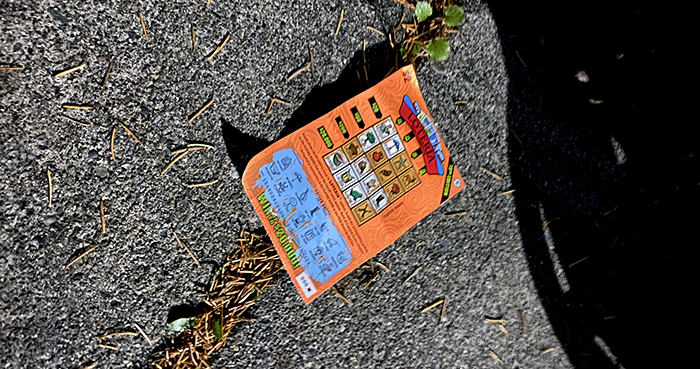 But someone won big at the Point Casino and Hotel.

She make a list of gifts for friends and family then tossed the list.  We put our names on the back in case she comes back for it.

We found a rhinoceros.

Or it could be a triceratops.  We’ll put our money on an amoeba.

No, that’s it.  Just brace yourself.

We’ve found many hubcaps in all conditions. 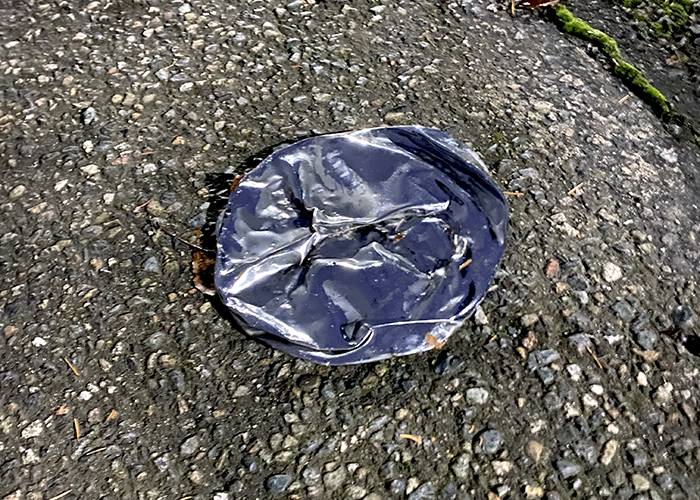 We found the refuse of the Taco Time Tokus.

Other than the cup, it had been thoroughly destroyed by traffic.

We didn’t find evidence of the McLitterers, but we did find six separate McMesses today.

Today is Veterans’ Day.   We figure McDonald’s was giving out free mess kits in honor of our veterans.  Get it?  Mess kit?  We hate having to explain our jokes.

This morning was another mild 47F.  However, it rained on our entire walk.  The rain isn’t really that bad when it’s this warm, more of an annoyance.  Again, we had a few waves but no roadkill and no money.  Not even a minion.

We did find a Higher Leaf Pot bag.

But it was empty.

A ticket to the ferry from Port Townsend to Coupeville.

You’d think the driver would hear it fall off.

An AriZona Green Tea bottle, about a quarter full.

Hmm.  The liquid it the bottle we picked up was not this dark.  Wonder what it was?  Never mind, we don’t want to know.

We found another tool for our tool collection. 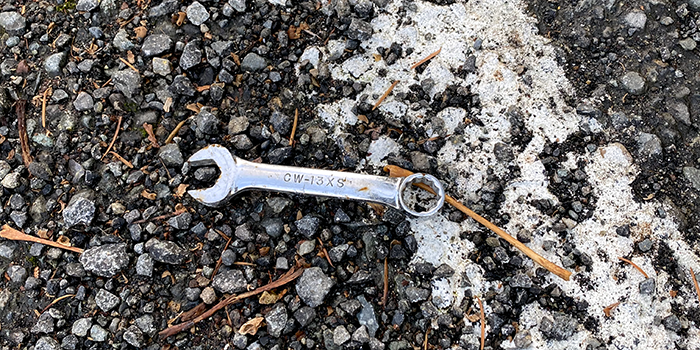 In August, we found these strange items.

They had been there a few days and had been disturbed.  We picked them up.

Today, on an opposite corner of the intersection, we found two more.

They look to have cornmeal in the terracotta plant trays.  One had four cigarette butts and roses.  The other had a cigar and onions.

We have no idea, but this one may be a reenactment of the Civil War Battle of Hampton Roads between the Monitor and the Merrimac.

Today was mild, clear and dry.  We got a few waves and a light blink.  We also removed a roadkill rat from in front of the apartments on 112th Ave NE.

We also found a penny!

Okay, not much, but is was not very run over and still shiny.  We’ll take it.

This was a rare morning for us.  We saw a Waning Gibbous. 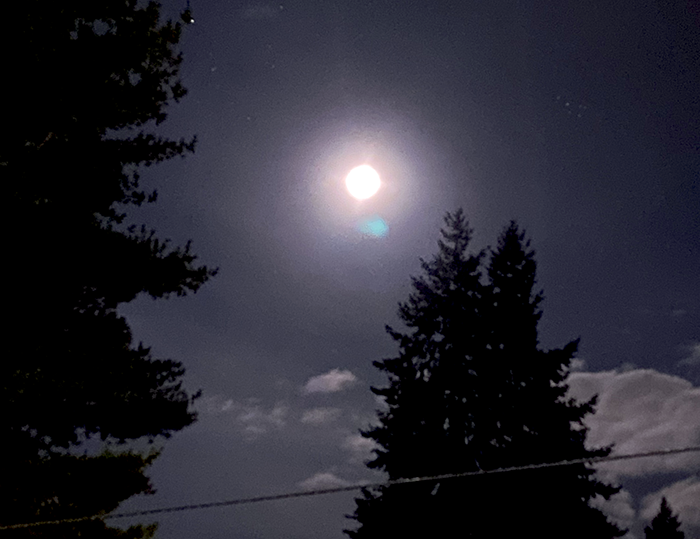 How many of you were expecting a fading monkey?

These are Gibbon Monkeys, not Gibbous Moons.  And they are not happy with your response.  Anyway, it was a nice moonset.

Later on our walk we saw a nice sunrise. 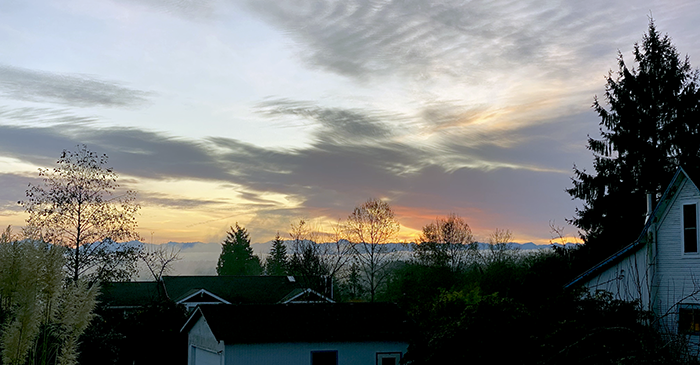 No, no monkeys here.

We found a bicycler’s skull cap. 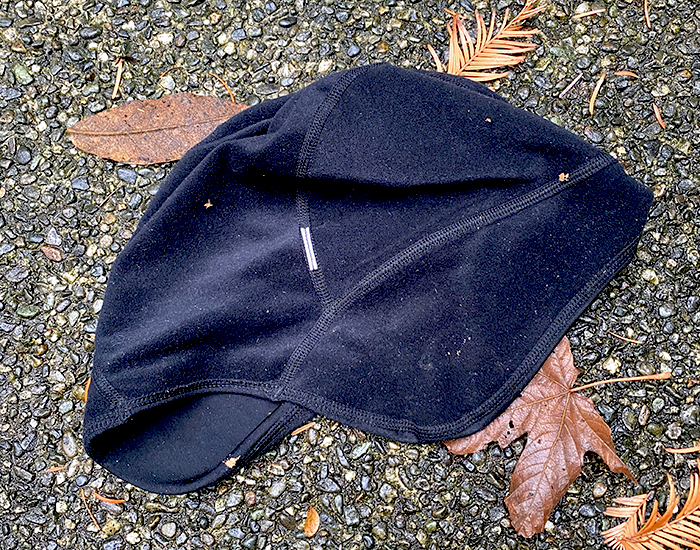 We have no idea how the bicycler would accidentally lose the cap without the helmet.  Perhaps he got distracted by the Gibbous Monkeys.

We came across another needle.

We only found the plunger and outer case.  No needle, though.

This was very disheartening.  On our walk toward Safeway we picked up the random bits of trash we found.  On the way back, we spotted something across the street on our outbound route.

Someone tossed a Red Bull can and an empty 7-Eleven cup on the sidewalk.   They are taunting us.

It was the biggest hubcap we’ve found but it was in very bad condition and got recycled.

We relentlessly picked it up.

The battle of Hampton Roads, between the Monitor and Merrimack continues.

It appears the Monitor is getting the worst of the battle.  The crew is leaving in life rafts.

Another mild, foggy morning.  We got a random honk and no roadkill, but did find some money.

Also, a tool for our collection.

Things are looking up.

At the park-and-ride, someone lost a camouflage blanket.

Sorry, make that a “Fleece Plush Throw Blanket.”  Ten bucks at Walmart.  It’s actually part of a two-blanket set, so this is really five bucks worth.  Ok, a buck at Goodwill where it’s heading.

We found a skateboard just hanging around. 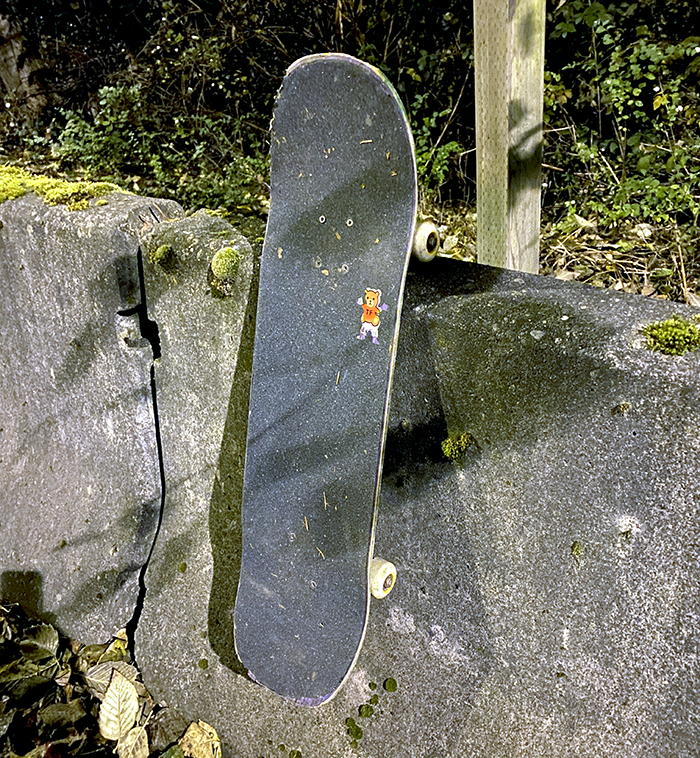 The bear may have been run over, possibly by the skateboarder.  We left it on the barrier.  If it sticks around, we may take it to Goodwill.  We could try riding it, but it looks dangerous to us.  If we removed the wheels, it would still look dangerous to us.

Aaron tossed out some trash.

An empty shopping bag from the Green Theory Pot Shop. 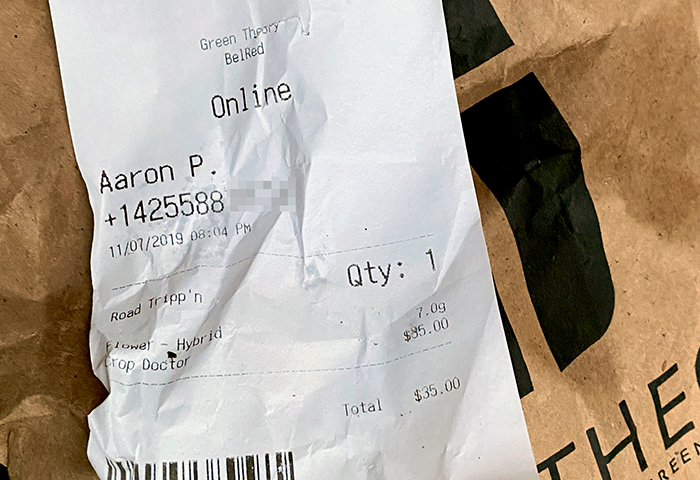 When you litter, don’t leave the receipt in the bag with your name and telephone number on it.  By the way, we have registered your number with TelephoneLists.biz so other pot stores can easily contact you.  Just being helpful.

We are having a nice run on sunrises at the top of the hill.

We’ll enjoy it while we can.  By the end of the year, it will be dark when we come by here.  And overcast.  Seattle has been named the nation’s gloomiest city.

In October of last year, we reached the top of Norway Hill exactly at sunrise, so we took a photo.

The Battle of Hampton Roads lasted two days and ended in a draw.  Our reenactment is now in day 3.  The crew has been abandoning the Monitor. 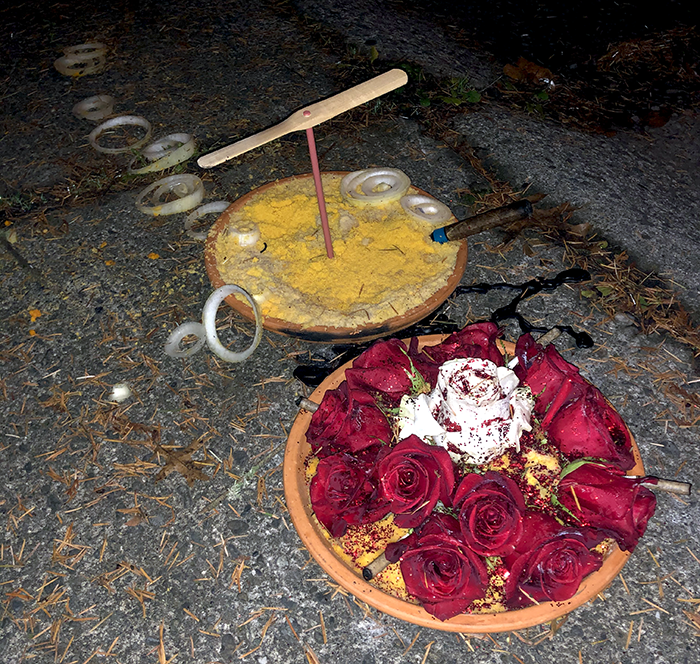 But wait.  It appears the Monitor is equipped with some new technology.  But is it enough to turn the tides of war?  Stay tuned for the next installment.  Ok, it really may be aliens.

Today was another mild day but with light rain turning to heavy mist for the last half our walk.  The traffic and trash were very light and made for a fast walk.  We got random honks and a couple of waves, but found no money.  We did remove an eviscerated roadkill rabbit from the road.  And, no, we don’t want to describe it.

We found an irresponsible pet owner bag at the bottom of the Tolt Pipeline trail.

Notice the well-trained rain drop on the right.  It takes well trained reflexes to catch a shot like this.  Well, ok, it could have been luck.

We haven’t found many doggy bags recently, probably since the weather has turned  cold.  Ok, so where do they do their business now?  Obviously not on our turf, for the most part.

We did find another tool for the tool collection. 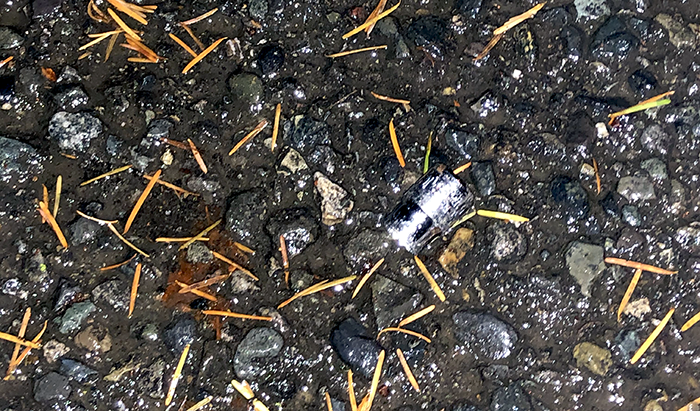 This happens to be one of our neighbors.  We generally grade the candidates on how quickly they remove their signs after an election.  So that means it is after the election.  Ok, we are one step behind.

The battle between the Monitor and the Merrimack continues

The crew of the Merrimack are almost gone, and for good reason.  The the high-tech apparatus appears to have been a failure.  The last of the crew are leaving with only the captain and the big cannon onboard.  What will happen?

Today we found no money  and no roadkill, but the weather was good.  Last evening the Puget Sound Convergence Zone converged on us.  This is not from last night, but it gives you the idea.

We had a torrential downpour while we were not walking.

This morning was nice, about 45 F and no rain.  But last night’s rain washed a lot of trash down the drains and knocked more stubborn leaves off the trees.  It made for a fast Saturday walk for us, about three hours.

As per our norm, here is our glove collection for this week.

We did find another tool for the tool collection.

Ok, it was only a rusty drill bit, but it counts.

We may have found more McLitterer trash.

The bag was neatly-tied but was torn open.  Nearby, we found two platters and a top, but not the unused condiments and utensils.  So we cannot confirm the identity.

We did find another Taco Time Tokus mess. 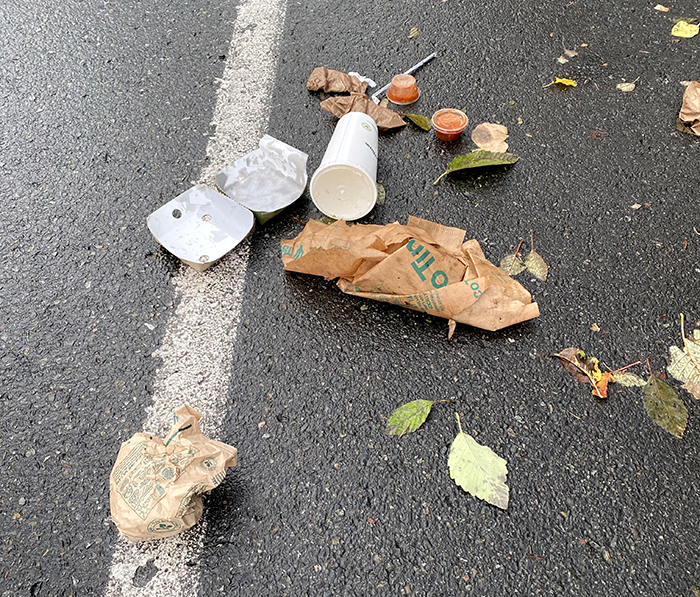 We found two cards on our walk.

This is a student’s ID card from Northshore Middle School.  It was found about a mile from the school.  That’s a long way to stray during recess.  We could try to use it but the kid has different-color hair than we do.

We’ll return it to the school. 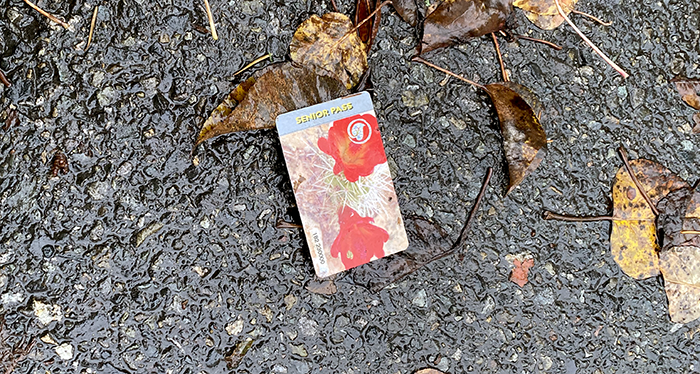 Of course, for seniors, it isn’t that long.  But this is worth about $80 to the owner.  We will try to track them down, but the handwriting on the signature is worse than mine, and I can’t read mine.

Early in our walk, we found a cheap pair of sunglasses.

Not our style, so we’ll send them to Goodwill.

We also picked up an artistically-rendered shoe. 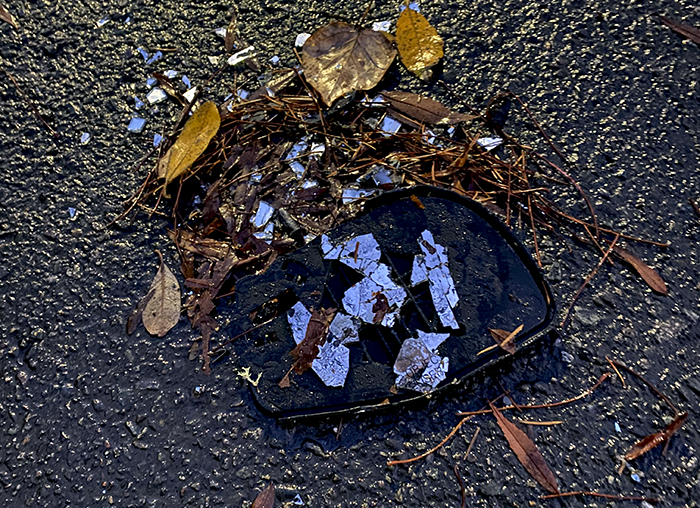 Never mind, this is getting overused.

Under the freeway was some candy.

There were about 10 pieces left, but we’re not allowed to have candy before breakfast.

After four weeks in the ditch, the lime bike is out! 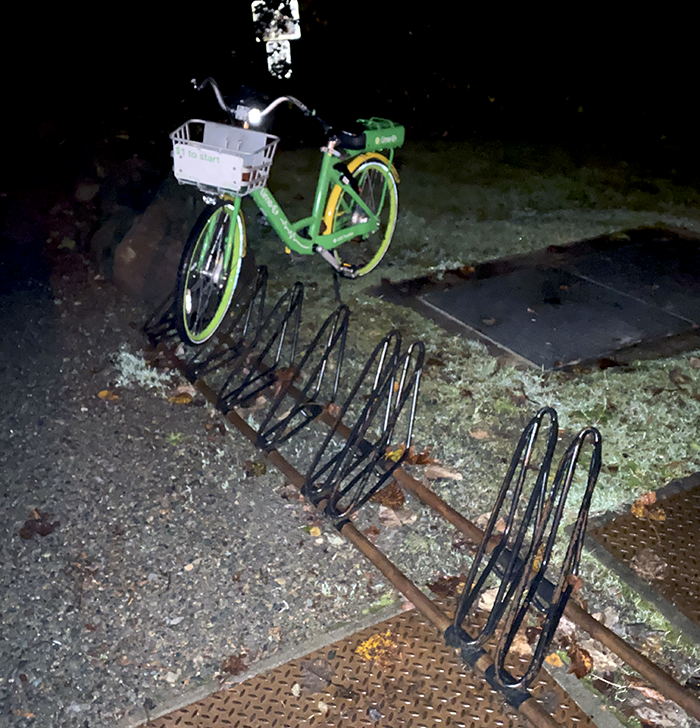 We did rescue a kid’s bike someone dumped in the bushes.

This is the second one we’ve pulled out of these bushes and set by the side of the road.

The first one disappeared in a day. 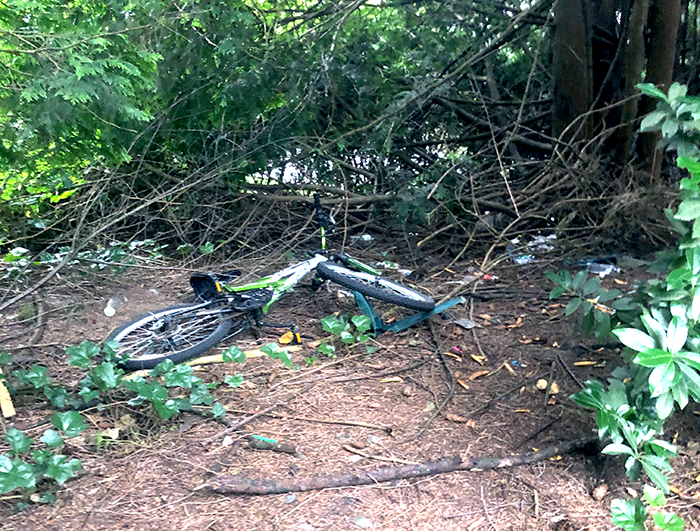 This trailer is back.

Before the road was paved, and this person had to move, he had a bird feeder outside.

We didn’t see one today, though it was still dark.  We try not to shine our flashlights to much where people are camping.

A car belonging to another camper got smashed into. 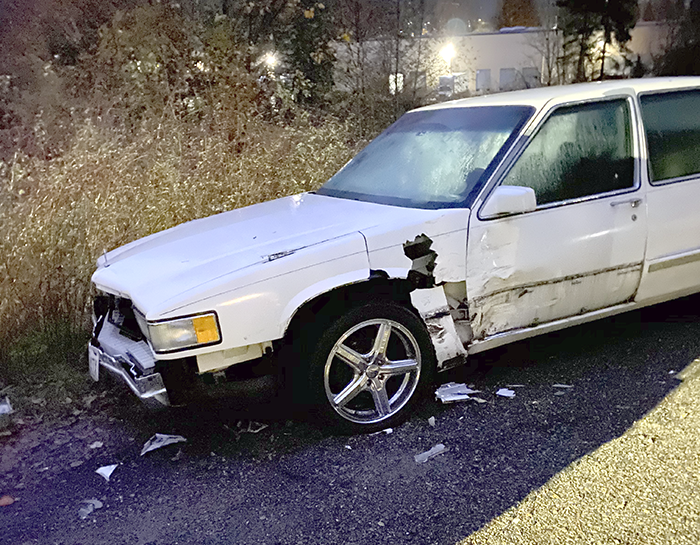 It was already in bad condition.  How does this happen on a straight, well-lit, freshly-paved road?

Walking along this stretch with a lot of parked vehicles, we search around the vehicles for trash.  A lady walking her dog called us over.

She asked if we were looking in people’s cars and thought we looked suspicious.    We can’t disagree.  Anyway, she bought our story.   The reflective vests helped. Janet and she had a lengthy discussion about the seemingly hopeless homeless situation while Chuck continued diligently on the trashwalker route.

Does this count as distracted driving? 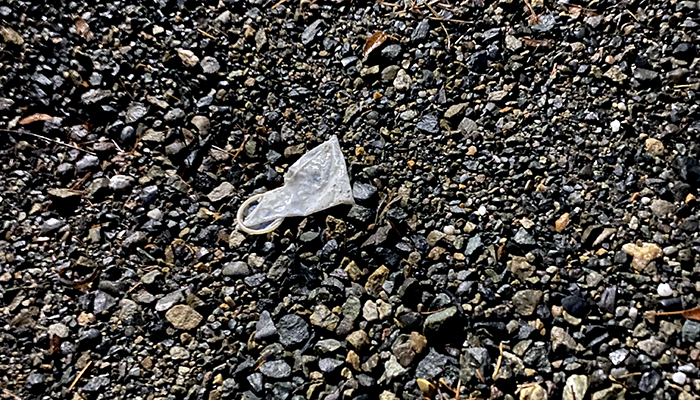 Maybe this is what happened to the camper’s car?