Today was a quick walk in mild temperatures.  We found a lot of miscellaneous trash, but not much interesting.

That is, unless you find pizza interesting.

A whole pizza.  It looked like it only had cheese on it, perhaps that’s why it was tossed.  We didn’t eat it either.  Now if it had some pepperoni on it…

At the Tolt Pipeline, we found a discarded eCig and an empty package for Solstice pre-rolled marijuana cigarettes.

But Winter Solstice was over a week ago.  Maybe they forgot.

Behind some switch equipment on Juanita-Woodinville Way, porch pirates left some empty packages. 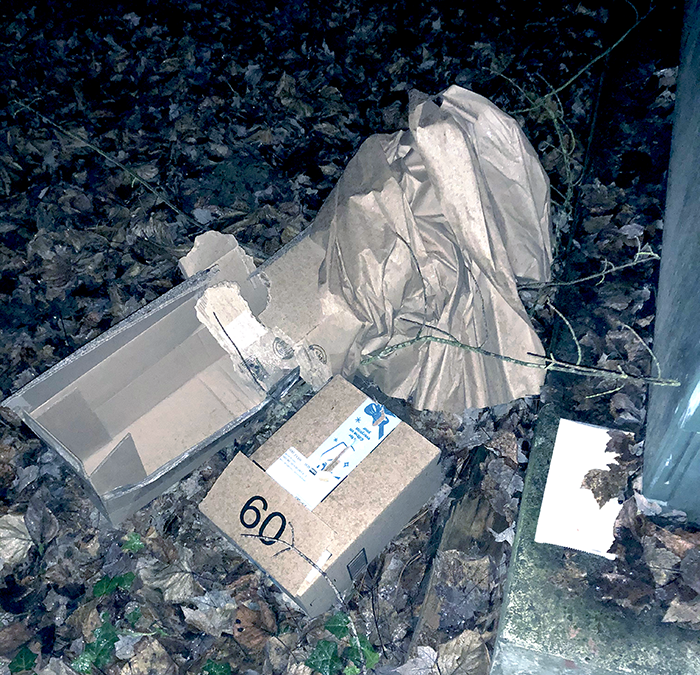 Two boxes from a nearby address.    Porch Pirates are frustrating, but some have designed devices to catch, or at least teach them a lesson, like the glitter bomb.

Amazon should contract with this guy to make the devices, then sell them for a nominal price to users who have been victims.  After the devices are purchased and triggered, the Amazon delivery force could retrieve them for refurbishment and resale.  We would pay $25 or so to cause grief to a porch pirate and have the ability to monitor the package when it is stolen.

Ok, it’s in the garbage can and shouldn’t be in yard waste, but maybe recycle?  We don’t know, but if it was disassembled, at least parts could be recycled.  We should tour a recycle facility to review their procedure.  We’re sure they would appreciate our advice.

Like we said, our walk was not very interesting.

After our walk, we traveled to Kalaloch Lodge.  For the last five years, we travel to Kalaloch the on December 30th and travel back on January 1st.

Our normal plan is to travel to the lodge on the 30th and walk along the beaches.  On New Year’s Eve, we drive around Quinault Lake and River looking for eagles.  We also take more walks along the beaches at low tide exploring whatever got washed up.

We spend New Year’s Eve and ring in the New Year at the Lodge with other guests.  They celebrate the New year on New York time, so the party’s over at 9 pm which suits us fine.

This year had different plans for us.  When we arrived at Kalaloch, the weather was okay and we went for a walk on the beach at mid-tide.  However, because of an incoming storm,  the seas were high and twice, rogue waves caused us to run for higher grounds, once on a log and once up against the cliff.  After that, we retreated to the lodge.

The next day as we planned to do the loop around Quinault, it was raining heavily.  So, we cancelled our trip and spent much of the day in the lodge visiting with other people, working a jigsaw puzzle and watching the rainfall.

The “river” below is normally a small creek.

On our Quinault loop, we usually see many eagles and try to get photos like this. 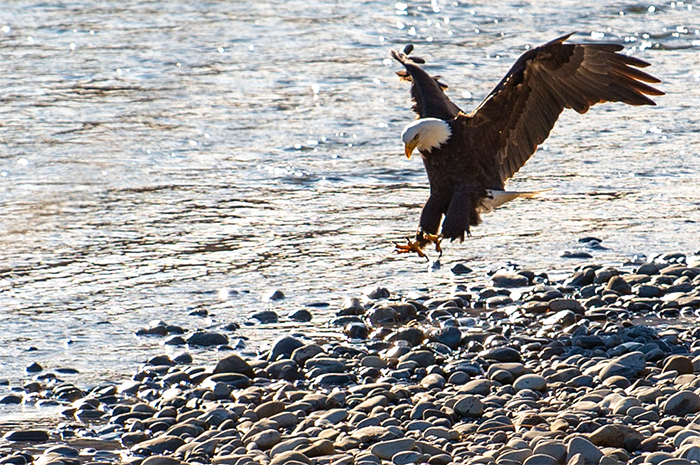 Today on our beach walk, we saw one lone eagle.

It looked more dampened than us.

We also took a photo at sunset.

Kind of disappointing compared to years past.

Despite the inclement weather, we had a great time.

We spent the day driving back from Kalaloch and did not pick up any trash.  At a gas stop, we did pick up a penny, but, per rules, Janet said it was not a walk find and ended up in her private piggy bank.  Not a good start to the New Year.

Today was cool and dry.  If felt good to get back into the walking saddle after our days off.  There was a lot of trash and a lot of traffic to go with it.  We missed the Seattle Bus we try to cross 160th with at the freeway, but made it across without having to trigger the walk signal.

In the gutter near the park-and-ride, we found a lost Nike jacket in good condition.

It was waterlogged so Chuck carried it over his arm and his jeans were completely soaked by the end of the walk.

At the top of the Tolt Pipeline, we found the remnants of a New Years Eve party. 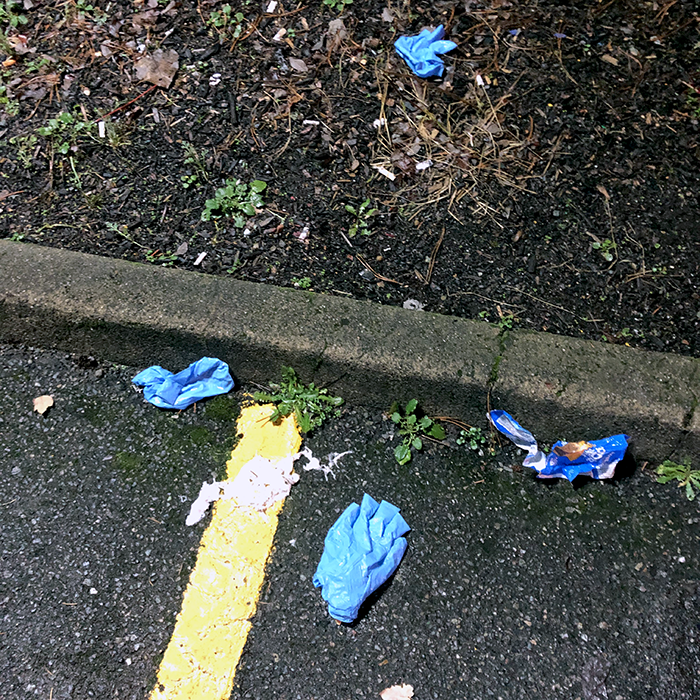 These three plus three more.  Evidently people were playing it very safe this New Years Eve.   We recall this scene from Animal House.

After which she she removed the rubber gloves. Wonder if she tossed them on the road.

In 2015, there was the landmark movie, Fifty Shades of Grey. 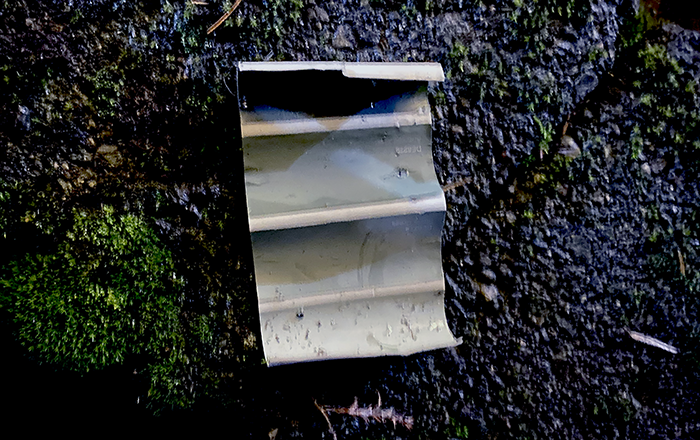 Today, we found a Four Shades of Grey Paint Chip.  It might make another best-seller movie.  Or maybe it would be like watching paint dry. 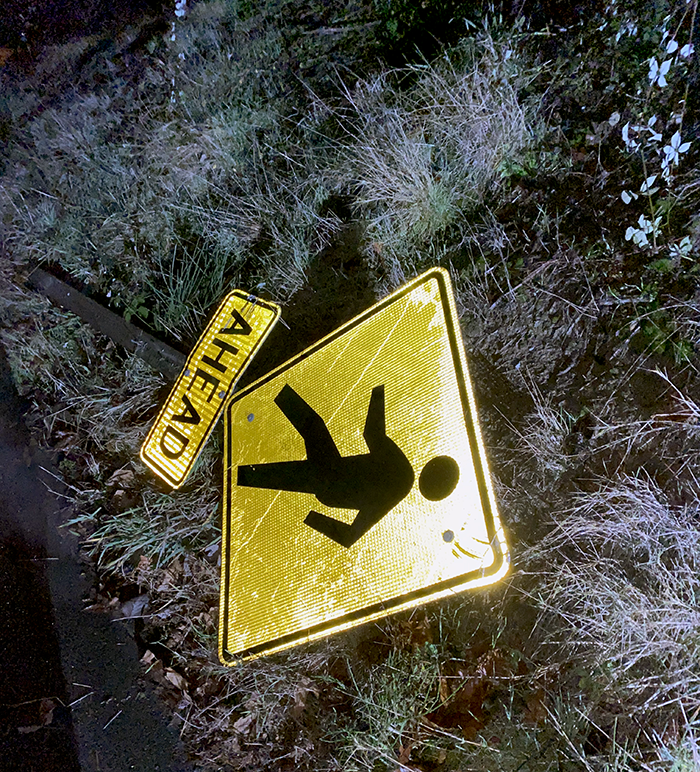 In two senses of the word.

It was 50F today at the start of our walk, much warmer than a normal January day.   Traffic was Friday light, but there was a lot of random, uninteresting trash.

At the apartments along 112th Ave NE, we found a sock.

Sock roadkill?  It attempted to escape from someone’s dryer and got run over.   It’s mate probably didn’t fare any better.  But they probably both ended up in sock heaven.

Outside the KinderCare fence, we found one bucket. 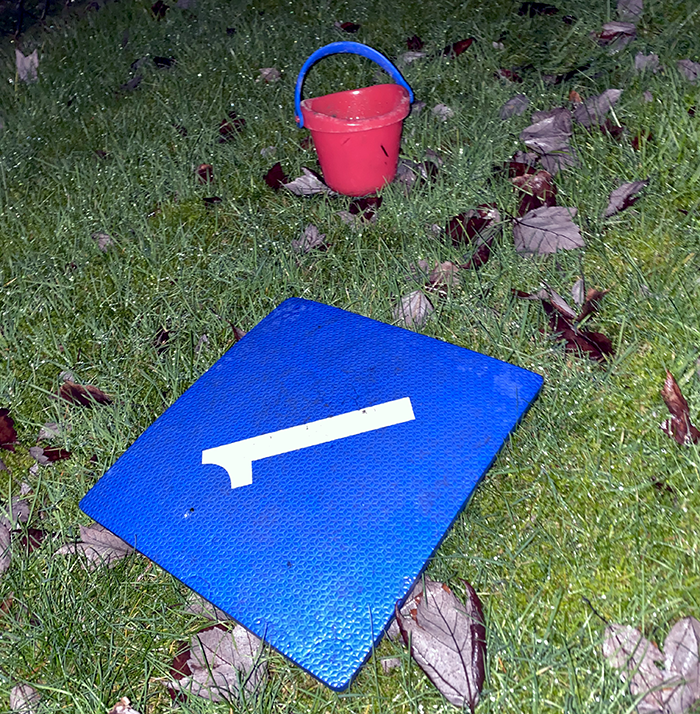 We did pick up a perfectly good pair of earplugs.

We do see why someone tossed them, though, they are both pointing out instead of in.  Manufacturing defect, no doubt.

It was damaged, which is why it was lost.  Fortunately, there was a recycle bin nearby so it got dumped.

However, this one appears to have been stolen.  According to the Internet, this belonged to a 2013 Dodge Grand Caravan.

The latest tag, probably it’s first, was 2014.   Someone stole the plate and peeled off the 2020 tag.  This site suggests cutting an “X” across the sticker to make it useless.  Maybe the next registration will come with a razor blade.

This morning was 39F and dry.  We removed a small bird from the roadway and found money. 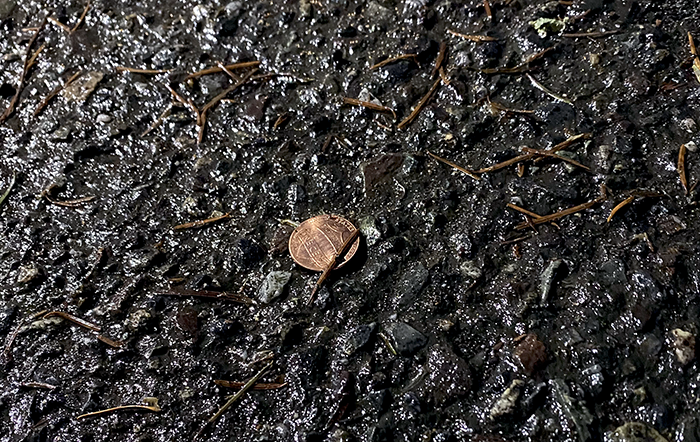 That makes two cents this week.  Now we have two pennies to rub together.

Bothell was having a race today.

The “Worst Day of the Year Run.”  At least they didn’t call it “Fun Run.”  And who are they to say this is the worst day of the year.  It just started, for heaven’s sake.  We didn’t see any runners, but it was only 6 am.

On the bridge in to Bothell, we found a tiny shoe.

It was only about an inch long.  Barbie’s participating in the run??  There are a lot of similar Barbie shoes online, most of them labeled “vintage.”  The definition of vintage is “more expensive than it should be.”

Near a swampy area, someone was working on their hygiene. 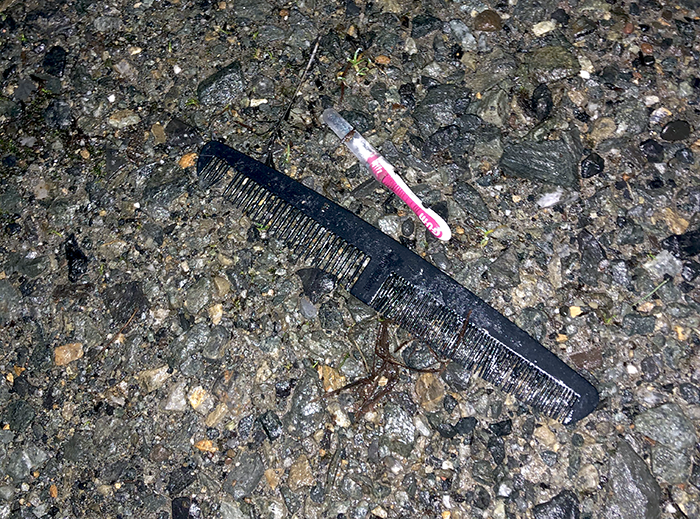 A comb and a toothbrush.  We could suggest several other better areas on our walk for this.  Nearby were some artificial flowers stuck in the ground.

Ok, at least he’s trying to pretty up the place.  Still, don’t invite any girls over.

A little further on our walk, we found some alcohol wipes.

The container was nearly full, but it was heavy and ended up in a garbage can.  Too bad, the Swamp Guy could probably have used them.

Another Hyde Single Use Vaping Kit.

Do you have to dispose of it on our routes?

Time for the week in gloves. 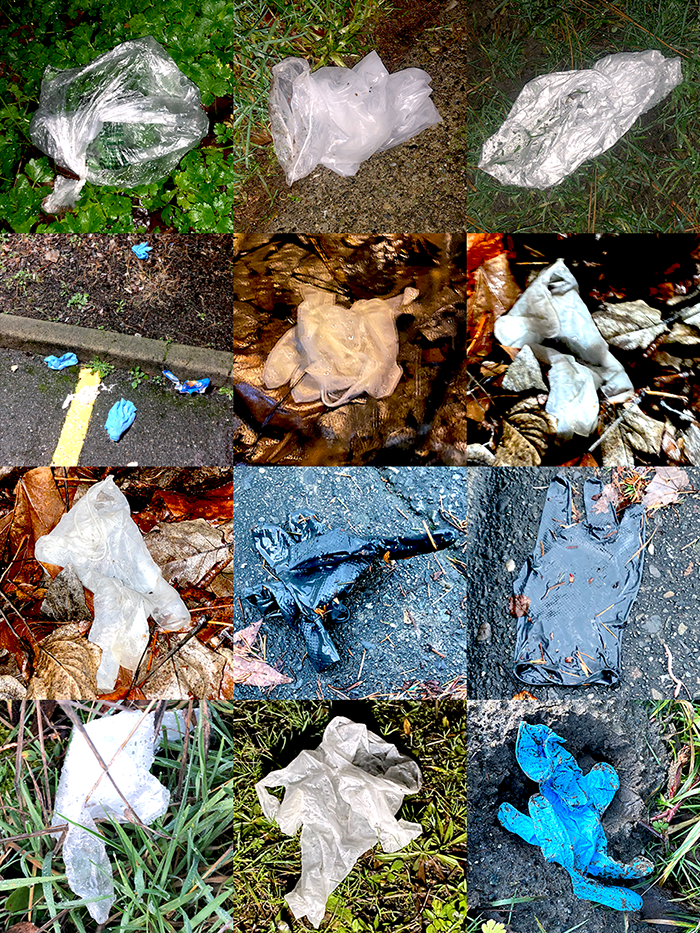 This may be a record.

A Honda and a Toyota.  Both were damaged and went into inviting recycle bins.

Someone left us a full tub of ice cream for breakfast. 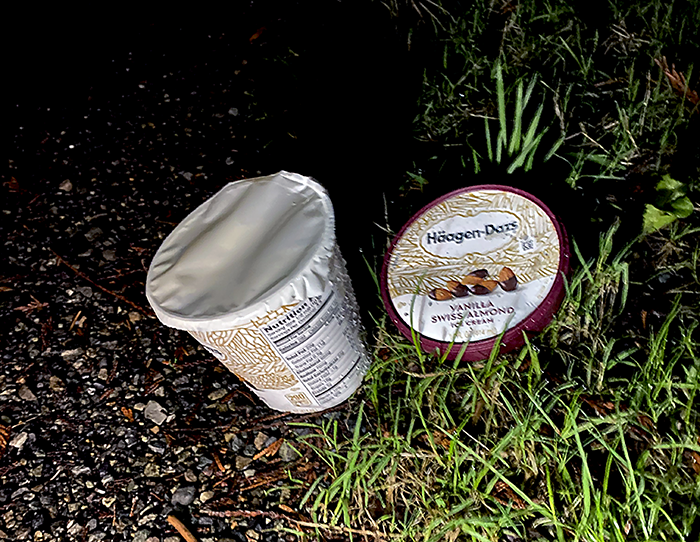 But it was melted so we dumped it out.  It’s the thought that counts.

Ok, this is different.

We should have driven by when it was still decorated and lit up.

We found a tool under the freeway.

Unfortunately, it was too far gone for our tool collection.  It was probably dropped during the construction of the freeway was built in 1964.  We’ll put it on eBay and call it a vintage tool.

On our way up Brickyard Road, we spotted a small, red piece of paper under some bushes.

We picked it up and pulled out fifteen feet of “Danger” tape.  People have probably been walking by here for years without realizing the danger in the area.  Probably from tripping over “Danger” tape.

At one point on our walk, a guy with his dog stopped right in front of us and lit up a cigarette.

We’ll probably pick up his cigarette butt on Monday, but that’s OK, he’s on Janet’s side of the street.

At the end of Brickyard Road, there is a sign we hadn’t noticed before. 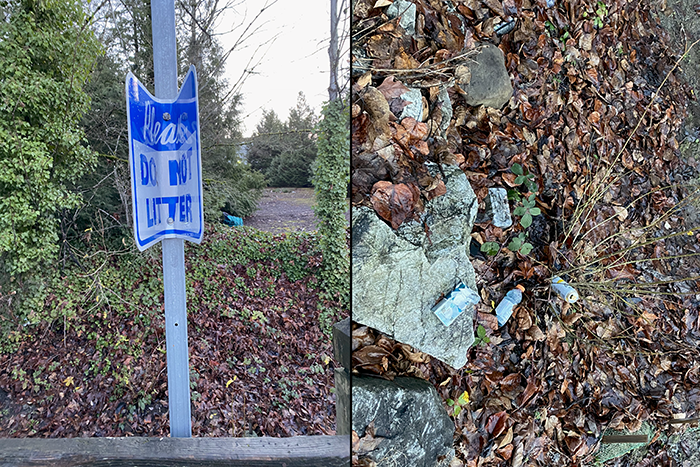 “Please Do Not Litter.”  Someone bent it in half which is probably why there is a bunch of litter in the gully behind it.

Wine with a straw??? 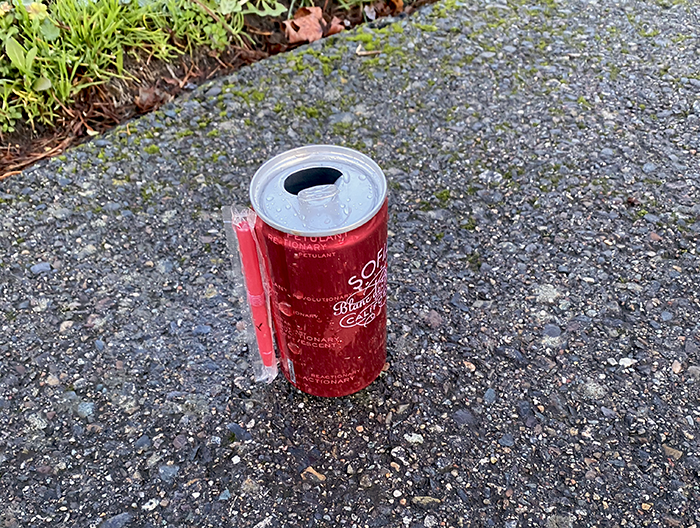 Sofia by Coppola Blanc de Blancs Mini.  This is from the Francis Ford Coppola Winery.

Did we mention we lived in Idaho when this movie came out?  We’ve been to that restaurant.