This morning was cold but without rain, but the streets were still wet.  There was a lot of random trash to pick up.  Over Norway Hill, we usually find two or three Mike’s Hard Lemonade cans.  This morning we collected a record of 18 of them.

We’ve been finding money the last few Mondays and today was no exception.

First, we found a penny then later a dime.  We are being penny and dimed.  It should be nickel and dimed, our litterers are cheapskates.

But they lost the blade scabbard.  We recycled it.

And they lost their earplugs.

You need to protect your ears from the sounds of chainsaws and girl’s screaming.

We found a strange brush in the road. 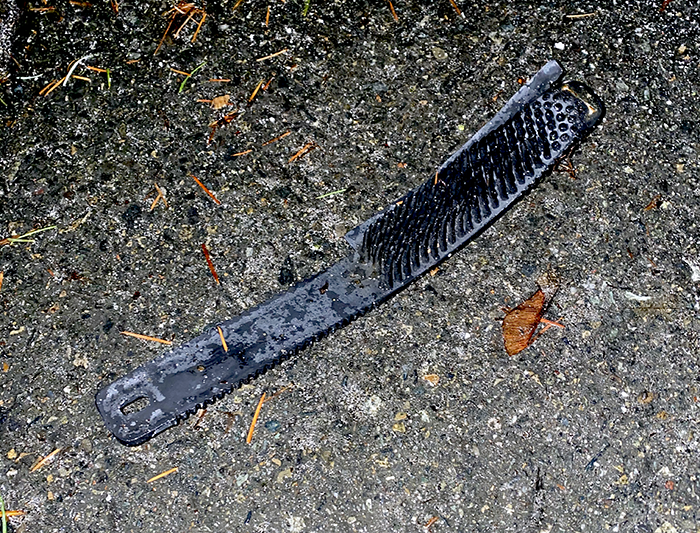 It might be a dog brush, but we’re not sure what the serrated handle is for.  It was in bad shape and got recycled.

This is the second one of these we’ve found and have never found Step 1.  It’s probably not a good idea to take step 2 before step 1, especially if you are doing something like defusing a bomb.  For us, the worst that would happen is that we would trip.

We found four oranges in the ditch.

Why would anybody toss out four perfectly good oranges? 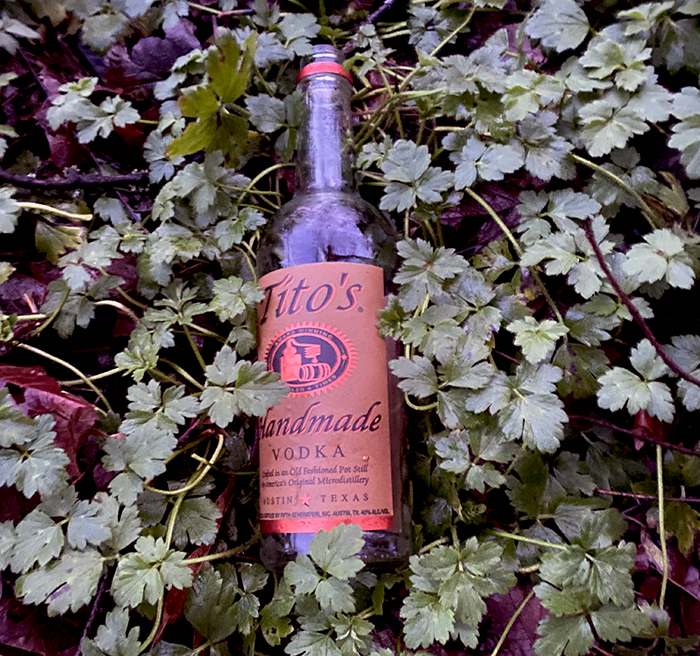 They ran out of vodka.  Can’t make screwdrivers without vodka.  Poor planning on their part.  Vodka will do that to you.

One should always aim for the stars. 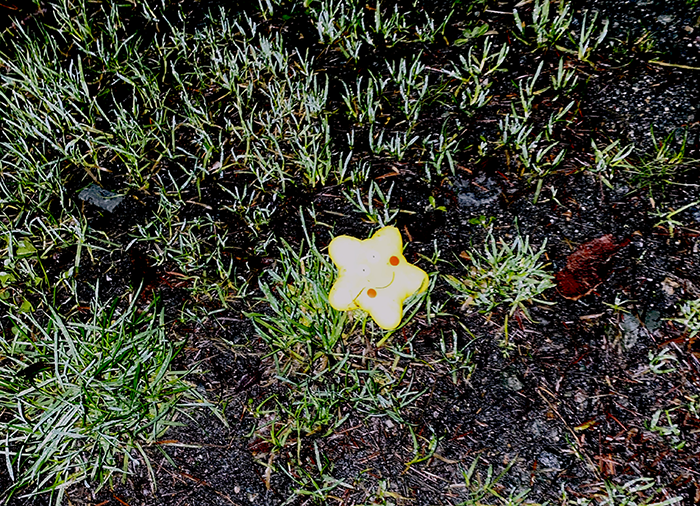 We found a toy Huskies baseball.

Our bags were getting pretty full at this point and the ball was on top.  Somewhere it jumped out.  We’ll see if we find it again.

“Please clean up after your pet.”

That’s way too polite for our taste.  Besides, would a person who doesn’t pick up after their pet heed a sign?

Just up the hill from our home.

This morning’s temperature was 32ºF, right at our walking limit.  But the walk was comfortable because it was dry without any wind.  Of course, we were wearing two shirts, thick vests, our rain jackets (hoods up) and our safety vests.  We always wear rubber gloves, but on mornings like this, we also wear one thick glove over the rubber glove on our left hand that we carry our bags with.  We also take along a Little Hottie.  No, get your mind out of the gutter.

Yesterday, we picked up a record number of Mike’s Hard Lemonade.  Today we found seven more making a total of twenty-eight for two days.  We’ve never had a Mike’s.  We should drink one to see what the draw is.  Maybe it produces an intense need to litter.

We found a laminated card. 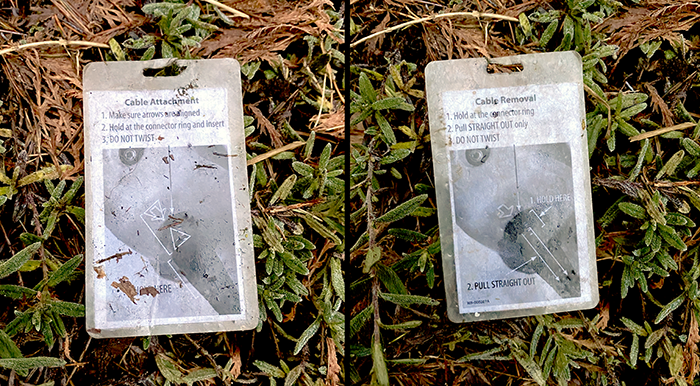 It had instructions on each side for the attachment and removal of a cable.  We don’t know what it’s for.  It could be the brake cable for a 1960 VW Bug. 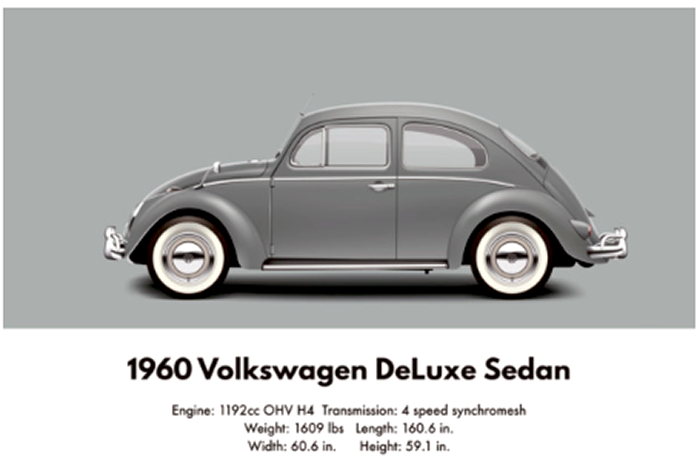 [Aside: One of us learned to drive in one of these]

Or it could be the umbilical cord for the International Space Station (ISS).

Here we are with this step-thing from yesterday.

The instructions on the card we found are,

DO NOT TWIST seems important.  Shouldn’t that be step two?  It would be very embarrassing to bring down the ISS.

We found a Victoria’s Secret Tag.

But we don’t know what the item was, so her secret’s still safe.  From what we’ve seen, there is not much to keep secret.

Another pair of broken spectacles.

Okay, we can understand why they tossed these.

We found what appeared to be a USB-C car charger.

It looks to be in good condition, but we don’t have any USB-C devices, so we can’t check it.  If anybody wants this, we will let it go for a low price.  A really low price. 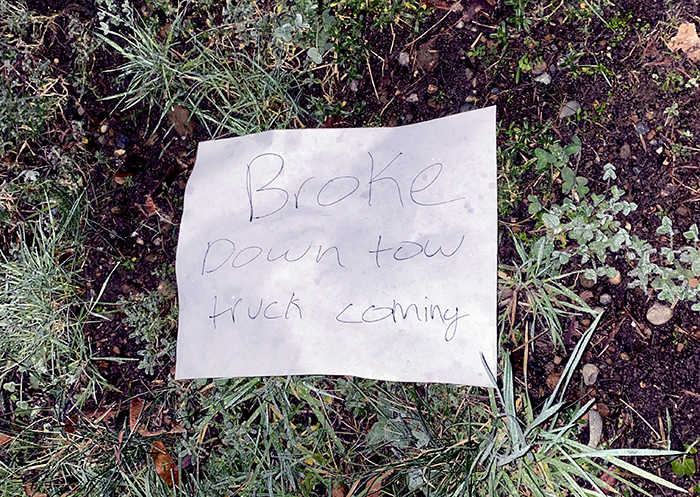 The temperature warmed up to 41ºF this morning but it had rained all night and continued to rain heavily throughout our walk.  Ditches that were empty yesterday were running with water today. 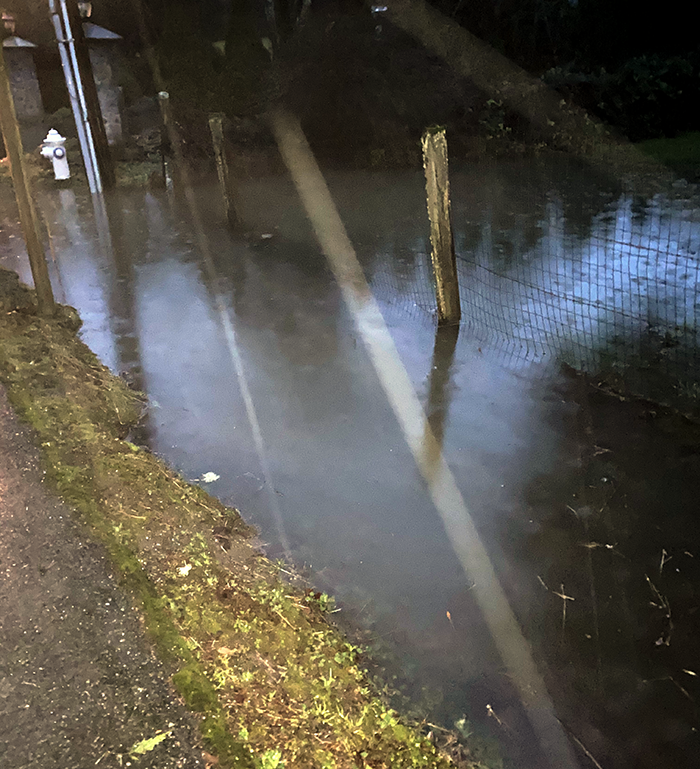 We hear it’s supposed to be good fishing.   Note the rain drops streaking through the photo.

This is the third time this has happened since we’ve been walking.

Someone shot off a bunch of acetate confetti along Juanita Woodinville Way near the Party for Less Store.  We don’t know if this is from the store, though.  The last two times were during the Summer and it took us several weeks to eventually clean up the mess.  Today it was raining heavily and we saw several pieces disappear down the storm drains before we could catch them.  This is a bad thing to flush into the ocean.  It’s also a bad photo.  Sorry.

They were for two feet about a hundred feet away from each other.  They will get washed and sent to Goodwill.

Someone threw down the gauntlet.

Okay, it wasn’t made of metal, but it was made of hardened leather.  Okay, it wasn’t hardened, it was just a soft leather glove.  But it was waterlogged so would probably sting a little if you got slapped with it.

It was even warmer today at 46 F and still raining.  It has been raining nonstop.  Lake Norway Hill is reaching at overflow stage encroaching on the road. 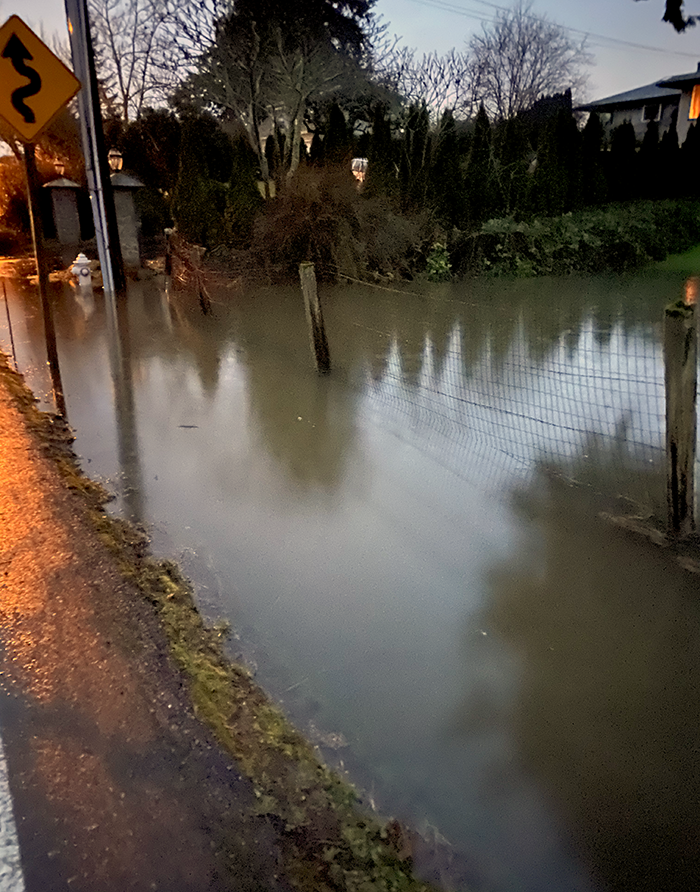 This is getting serious.

We met Vik walking without Hazel, his dog.  We asked where Hazel was and he told us “She doesn’t like to walk in the rain.”  So she sends you out??

One of the first things we found this morning was a ball across from a school.

It may have been a volley ball or a soccer ball.  In any case it was well-weathered.  We tossed it back into the school yard.  We could have claimed the law of salvage because of the heavy rains, but then we’d need to get lawyers involved and our final cut would be about seven cents.  Wait, that’s more than we make in a normal week.  We may need to reconsider.

We found a tool for our lost tool collection!

But this is a plastic screwdriver bit with a square grip.  We’re not sure what the purpose of this is.  Perhaps it’s a novelty stirrer for a screwdriver cocktail?

We have been passing this bike for two months now.

It is padlocked to the fence.  The guy may work incredibly long hours or may be a fair-weather rider.  King County Metro should charge for Park-and-Ride parking.  Oh, wait.  They are in a stupid way.  What else is new?

Someone at the Park-and-Ride jumped the curb and took out a traffic sign.

Fortunately, we were not on the sidewalk at the time.  We emailed the Washington State Department of Transportation (WSDOT).  They got back to us very fast saying it wasn’t their problem and forwarded our email to the City of Bothell.  The City of Bothell has been very responsive to our requests in the past.  We’ll see.

At the major drain at the park-and-ride, a lone tennis ball was struggling against the constant flow of water.

We saved the ball and cleared the leaves from much of the drain.

We found another nice glove.

This one probably belonged to a nearby home, so we left it on their fence.  Yes, we can be nice sometimes.

At our turn-around point at the end of 145th Avenue, we found that someone dumped a Safeway basket.

It was light and we were on our last leg home, so we carried it with us.

Later, we found a Mike’s Hard Lemonade can (surprise) floating in the middle of a six-inch water-filled ditch.  After some deliberation, we determined the basket might be able to net the can in.

After a few attempts, success!

This morning it was still warm and raining, but much lighter than yesterday.  Traffic was again, Friday-light and the trash was also very light.  We think the rain is putting a damper on littering.  A good thing. 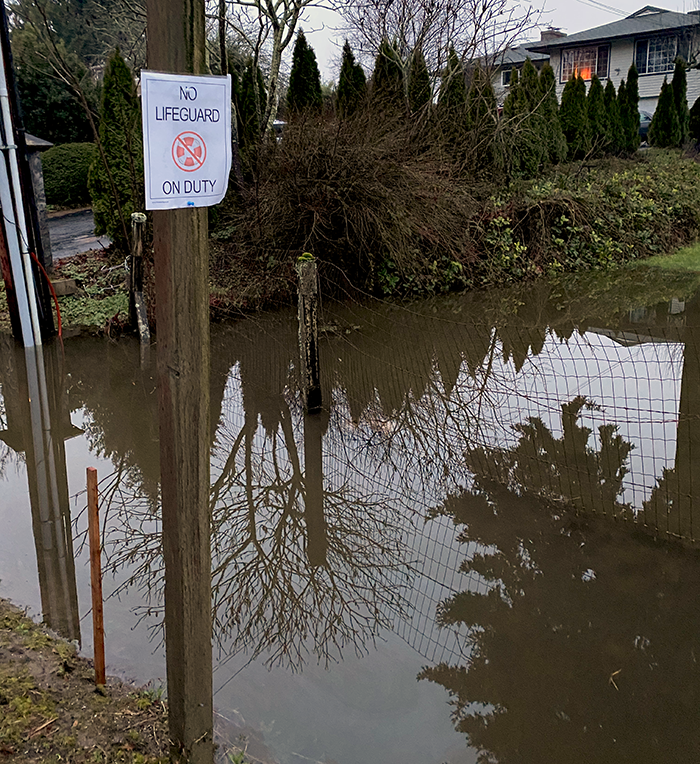 The lawyers are probably unhappy about this.

As we started out our walk, we found this salamander heading across the street. 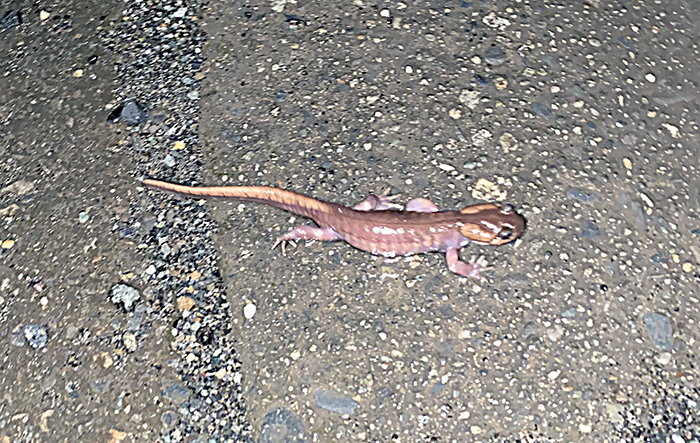 At his speed, this was a bad idea at rush hour.  As we approached with our flashlights, it turned around and headed for the curb, but couldn’t climb it.

We picked it up and gingerly placed it back in the wetlands.  It didn’t look any too happy, but we don’t know what a happy salamander looks like.  Or a sad one, for that matter.

Perhaps we should work on our empathy and compassion for salamander relationships to better empathize with them.  They are slimy, though.  Not sure we can get past that.

Near the Safeway gas station, someone lost a gas cap.

It just shows the risks of texting while fueling.  Is there a ‘Find my Cap App’?  The common answer is probably ‘in the gutter.’  We could write this app.

We found a cold-weather face shield. 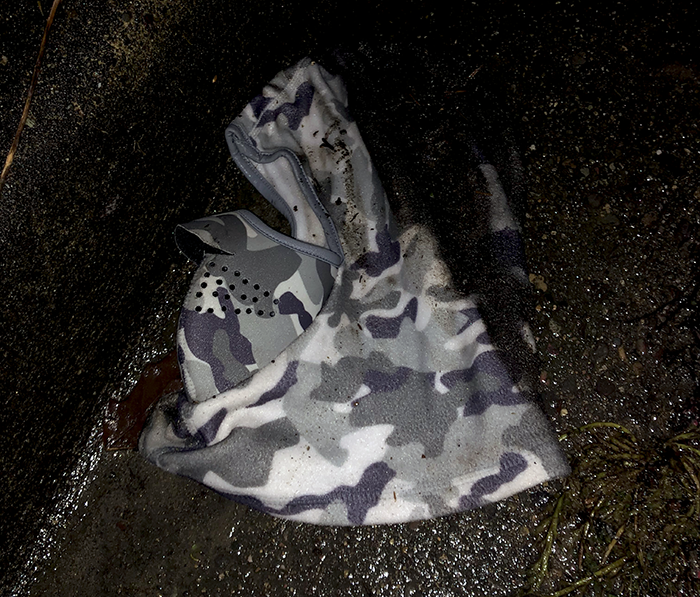 It is a “Seirus Youth Combo Clava.” face shield.   It may go to Goodwill.

Another day in the low 40s and light rain.  We picked up the normal amount of trash and didn’t find any money.  We did get a wave from the Metro bus driver like last week.  We removed two roadkill rats.

Janet picked up one on her side of Brickyard Road but had no place to put it.  She came over to Chuck’s side to dispose of it.  She looks to be sizing it up for a barbecue.

There was also a crow that wasn’t fast enough at dodging the cars.

It was just some feathers.  We picked them up.  There was a crow up in a tree squawking at us.  Probably saying, “Hey!  Those are mine!”

On our way down the hill from our house,  we found that another mud slide had occurred. 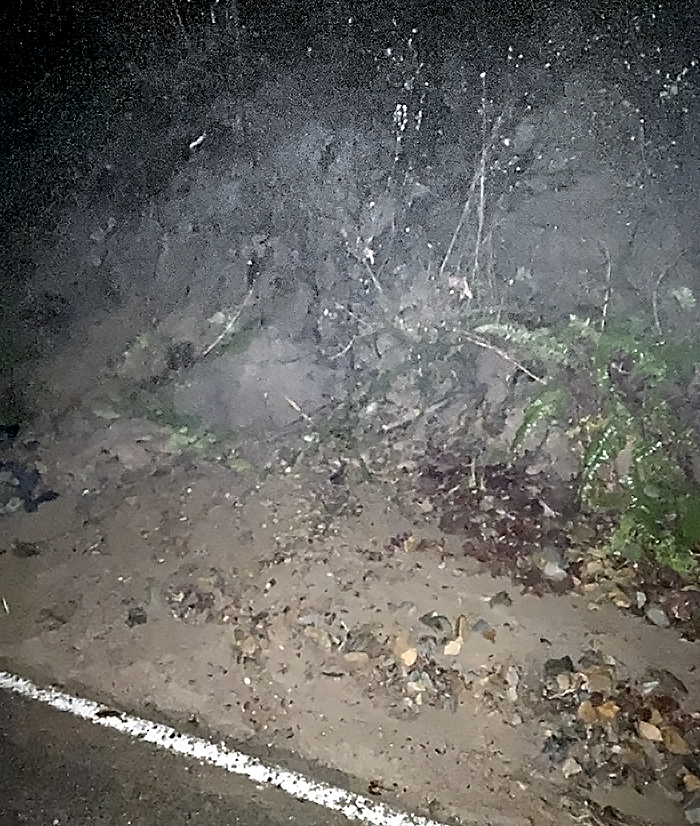 This one was very minor and barely made it to the road.

At the Sammamish River Park, some construction has been ongoing and we thought nobody was making use of it. 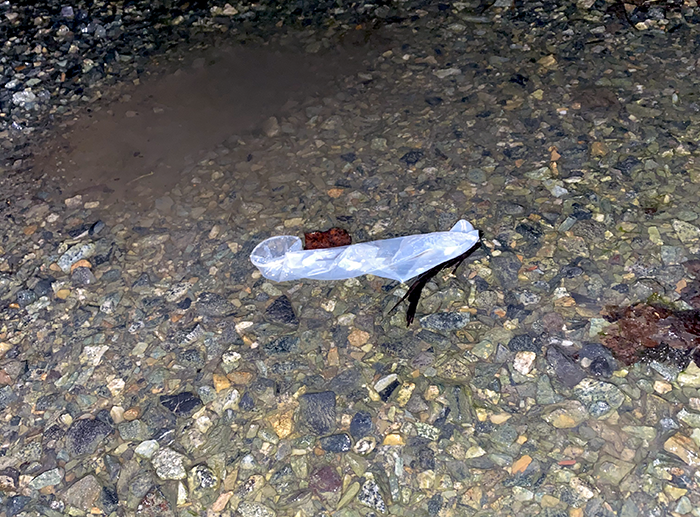 It’s time to wrap up our week in gloves and poop bags. 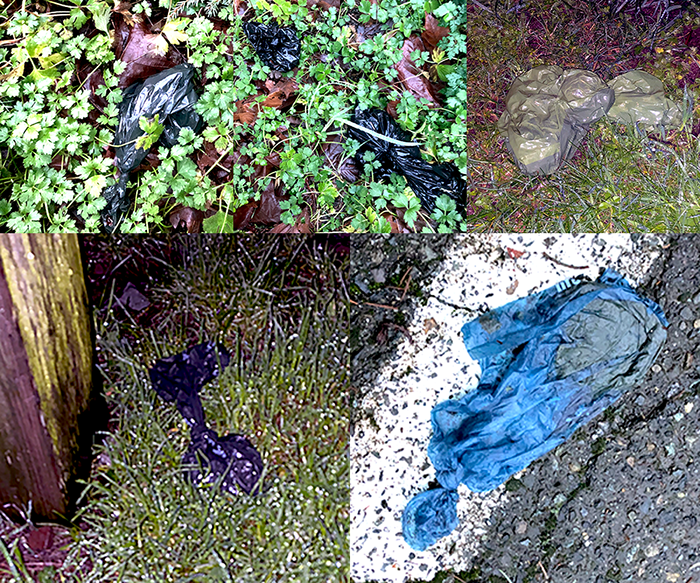 So, what are they testing?  Drug and alcohol free or your knowledge of drugs and alcohol?  Either way, the date is 2016 so it’s probably expired.  Might as well toss it out the window.

We found some toys.  A baseball. 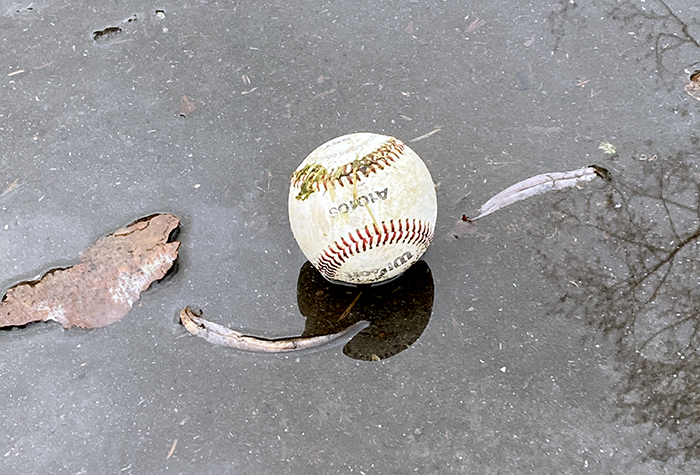 It was near a school and it took two tries to toss it back over the fence.  Hey, it was near the end of our walk.

There was no obvious owner, so it’s now in our ball collection.

And a Star Wars Mudtrooper. 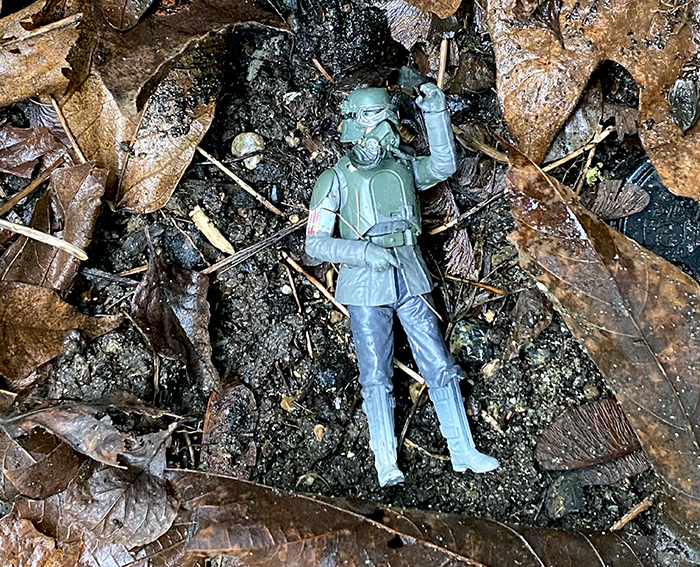 We haven’t kept up with all the movies so we tried to Google this character.  We couldn’t find any references other than toys and collectibles.  Perhaps it wasn’t in a movie and was invented by Hasbro.  According to this site, Hasbro has paid about 1.5 billion dollars in royalties over the last 21 years.  If they are inventing characters, Disney probably doesn’t care.

By the freeway, we found a heavy truck mudflap. 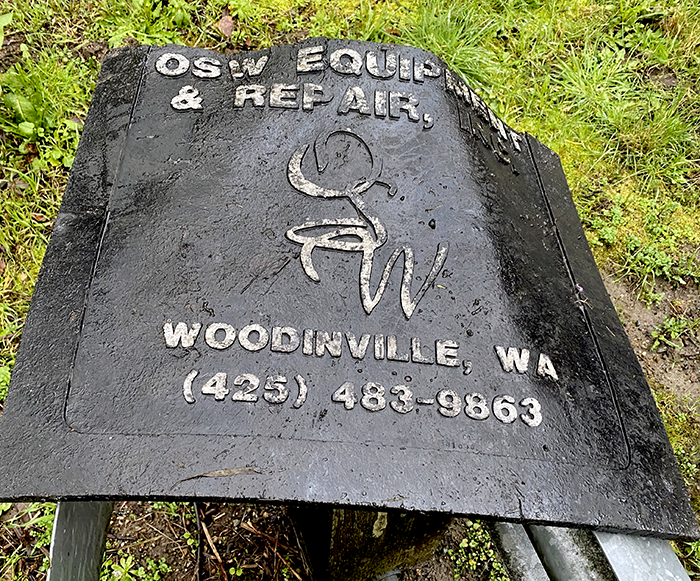 OSW Equipment & Repair.  Guess they have something else to repair now.

On Brickyard Road, someone dropped a half-eaten ice cream bar. 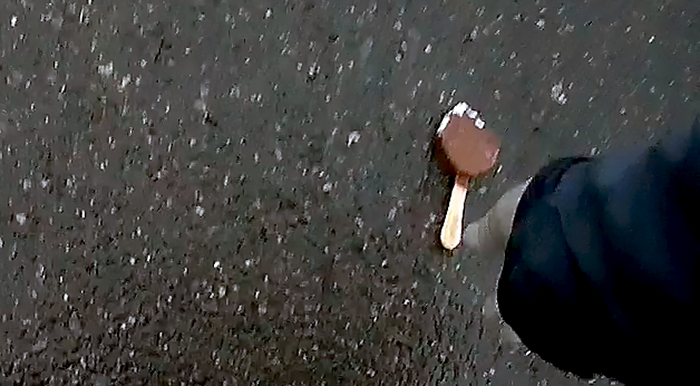 It was recent because it hadn’t melted yet.  Chuck put it in his bag.

Later it was discovered that the bag had a hole in it.

Fortunately, there was plenty of water in the ditches and our shoes were already wet.

Finally, one of the weirder things we have found.

A banner stuffed in a milk jug.  They keep trying to put this guy in a bottle but he always seems to get out.