This morning was cool and dry.  Over the weekend the weather warmed up and allowed people who have been trapped in their cars to finally roll down their windows and empty their cars of all that accumulated trash.  And we picked it up.

On the outset of our walk, we found an ominous sign, two empty Coors Light six-pack cartons.  As our walk progressed, we picked up a total of eleven Coors Light bottles strewn along Juanita-Woodinville drive.

At the bottom of of the Tolt Pipeline, we picked up a four-pack of beverages. 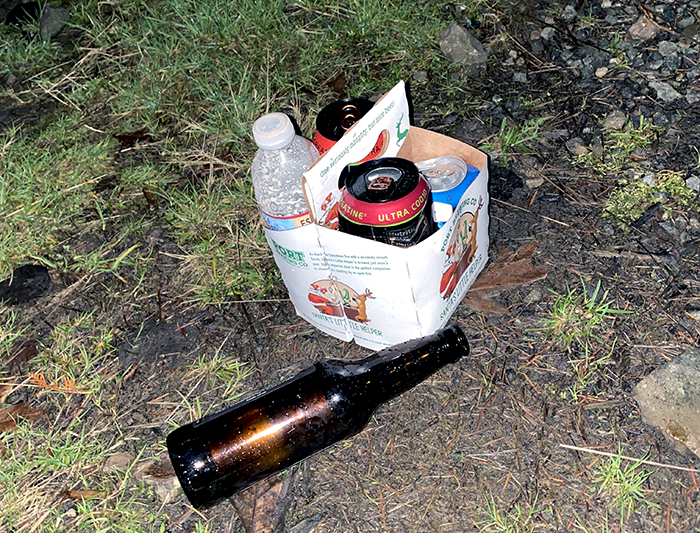 Or maybe a five-pack?  The bottle was an Elysian Mens Room Red.  So by the end of our walk, we were carrying twelve bottles counting the Coors Light.  Maybe more like 22 bottles since eleven Coors Lights are worth one Mens Room Red.  Okay, in our opinion.

We did find another penny.

Lately, we seem to be finding one penny per week.  At this rate, we’ll never be able to retire from walking.  We need Washington State to adopt a redemption value on cans and bottles.  At ten cents a container, we’d make a killing.  At least two bucks per walk.

We found a book on our walk.  It hails Neymar as the new Pele.  However, Pele, if he played today, picked Lionel Messi as his preferred teammate over Neymar.

“Graciously donated to Helen Keller [School] PTSA.”  And Graciously tossed by the student, the “S” in PTSA.  In our day, it was the PTA, but let’s not go there.

This was a tennis ball-sized soccer ball that was well-chewed.  It ended up in the garbage. 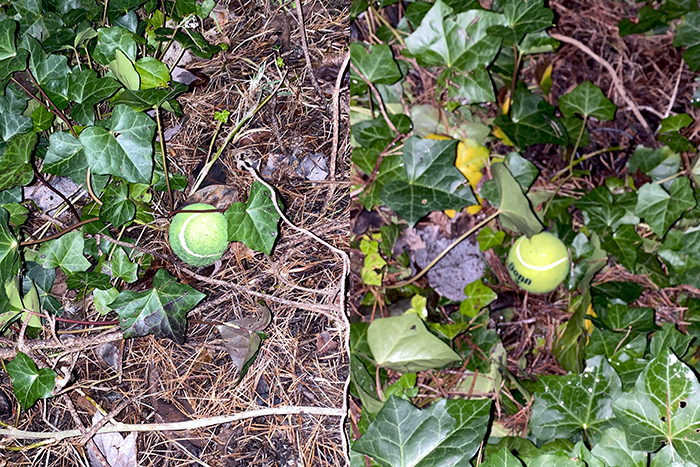 These were a few feet from each other and outside the back yard fence of a house.  We tossed them over the fence.  We imagine the owner looking out his back window:  “Now, where the hell did those tennis balls come from?”

We found a mouse.

Again, they put up these fake speed signs. 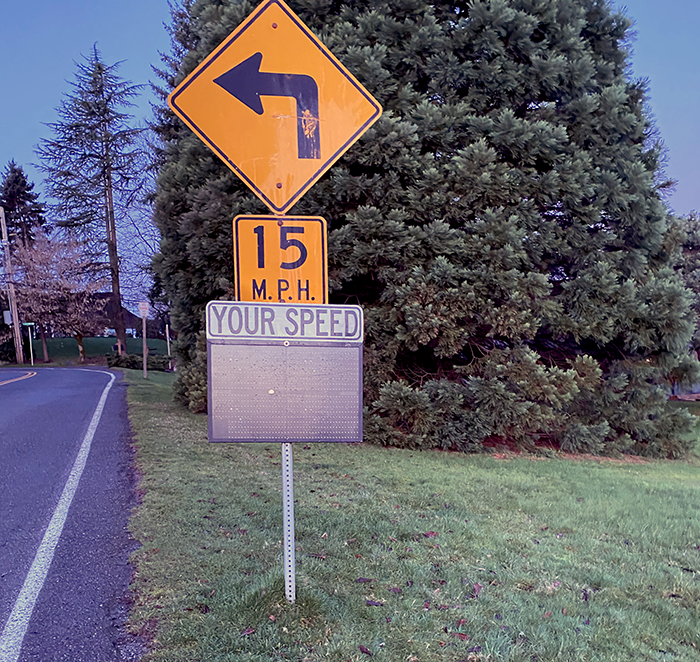 We ran at it several times and it never registered our speed.

Then we found this.

Thought we found another thong.

But it was a headband.  We can imagine someone could use this as a thong.  Think Speedo, but don’t click on the link.  Sorry, too late.  We need to quit imagining things.

Another pair of glasses.

Making a spectacle of themselves.

Well, Seattle has made some milestones as far as the weather is concerned.

“With yet another rainy day on Jan. 31, Seattle has now notched measurable rain on 28 of the 31 days this month — tying the record for most days in a month with measurable rain with the 28 days of rain in January 2006 and January 1953.”

We missed the record rain by heading south to Tucson, Arizona.  We visited good friends, Vance and Kandi, who Snowbird in the southern climes in the winter.  Early Tuesday morning we headed to SeaTac for a flight to Tucson to meet up with them.  It was a dark and rainy drive with a few unwelcome surprises mixed in to get to the airport.  After that, our Delta flight was smooth and uneventful (as it should be) and we arrived in the Land of Sunshine.

We stayed at the Hotel McCoy in Tucson.

This is an old motel that was revamped.  “Retro meets contemporary here at our 1960’s mid-century modern art hotel.”  There were a lot of painted murals and each room displays the art of a local artist. 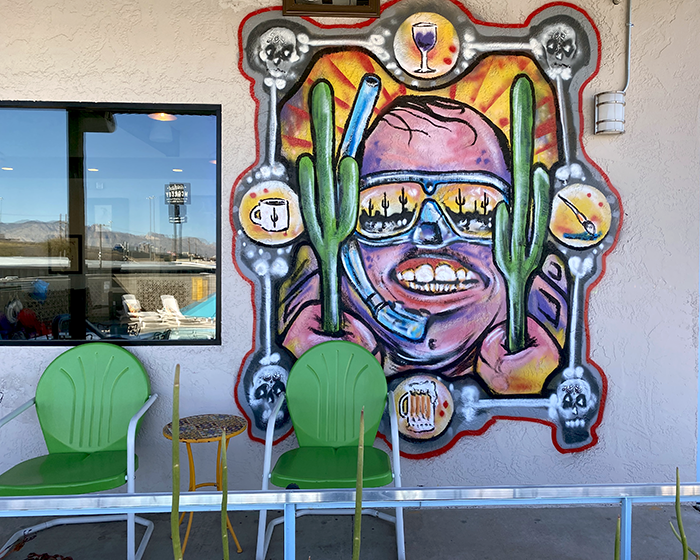 Our room’s artist was Christina Thomas, and one picture that we found interesting was Blah, Blah, Blah.

It is drawn mainly with word blah with a few others mixed in. Someone told us that these lights in the sky are called the moon, Venus and stars. We seem to remember seeing these somewhere long ago.

One of the sites we toured on our trip was the Titan Missile Museum.  It was very interesting and we highly recommend it.

Janet was promoted to Captain.

Here is Captain Janet and her second officer performing the two-man, synchronized key-turn to launch the Titan II missile.

A toast to a successful start to the Mutually Assured Destruction (MAD) of the world.

We played tourist and visited Old Tucson and Tombstone.  We also found a few pubs and breweries and ate at a very good Ethiopian restaurant.

A traffic circle with a four-way stop.

On our visit to Tombstone, we had lunch at Big Nose Kate’s Saloon.

Inside were about twenty motorcycle cops on a training ride.  Yeah, right.  As they were leaving, they went behind the bar for a photo op and got a round of applause.

Overall, we saw relatively little trash in and around Tucson.  On the morning of our flight back to Seattle, we hiked to the top of Sentinel Peak.  At the parking lot, we saw our first real trash in there. 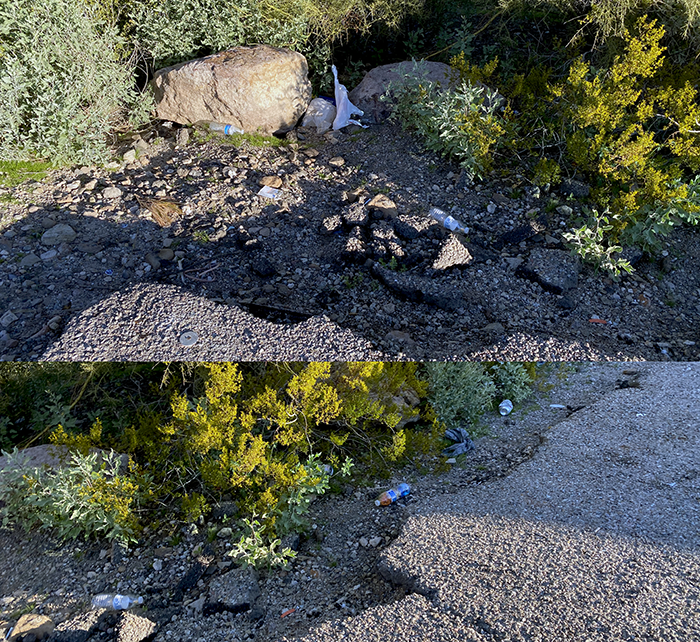 No, we left it.  Not our territory.

While waiting for our flight, we found money! 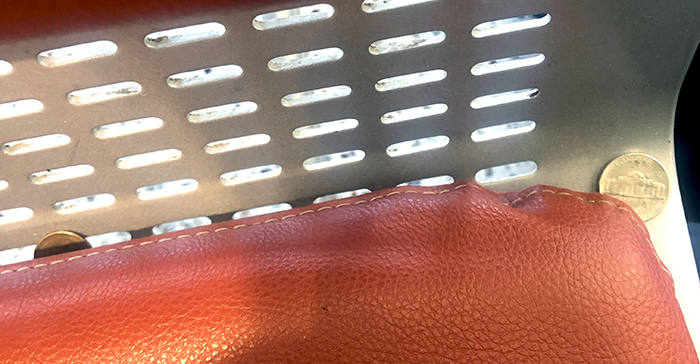 Six cents behind a seat cushion.  We did not leave that.  We had the urge to start checking all the seats, but we thought that would be a bit obvious.

When we landed, we were greeted with dark skies, wind and rain.  Now back to our regularly scheduled program.

The weather this morning was a warm 53 F with breezes and heavy to light rain the entire time.  We didn’t remove any roadkill, but we did see a lot of earthworms and a few flattened frogs on the road.  You know we’ve had too much rain when the frogs are trying to get out of the water.

We did find more money.

A dollar bill.  Some people just throw money down the drain.  Good for us they were a bad shot.  Guess the buck stops there.

Two pair and a single.

There was a mystery bag.

It was relatively heavy and appeared to be a poop bag or contain something dead.  Either way, we weren’t interested in exploring it.

Or maybe just a consistent one.  Three empty chewing tobacco cans within thirty feet of each other.

We picked up this 3 x 4 foot by 3 inch thick piece of foam rubber. 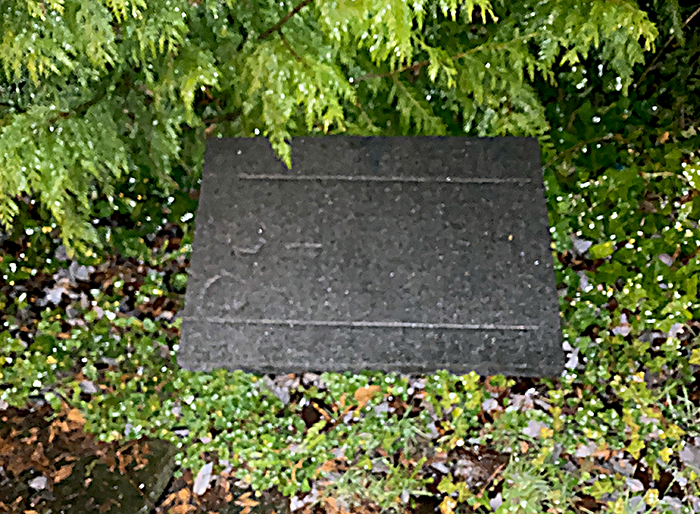 We wrung the water out of it and carried it to the trash bins at a senior center on our way.  We threw in the sponge in a big way. 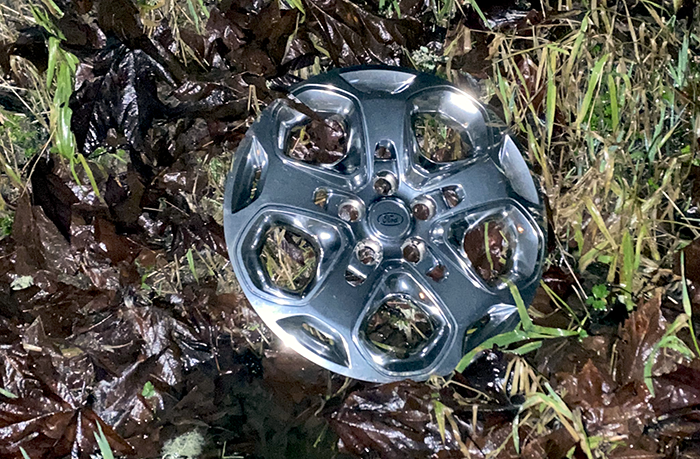 A Ford hubcap that was in bad shape.  It ended up in a nearby recycle bin.

This one was in good shape and will get recycled at Goodwill.

We found a kid’s toy.

A forlorn unicorn.  There is a book about this unicorn.

“A little Unicorn craves adventure, but is never chosen for quests due to her size. Eventually, a Princess comes to visit and her life changes forever.”

Maybe she should have stayed home.  It was early in our walk so we left her sitting on a fence.

Linda purchased something from Home Depot.

She probably picked this up from their litter department.  “Hello, I need some litter.”  “Yes ma’am.  What color would you like?”  “I think yellow would go well with grass.”

Another pair of cheap safety glasses. 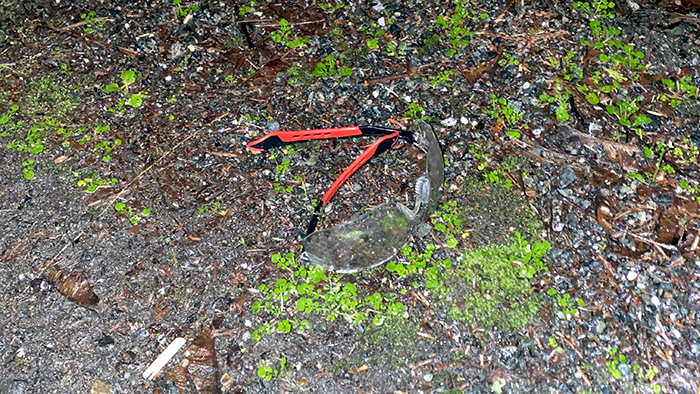 They must be disposable for the number of these we find. 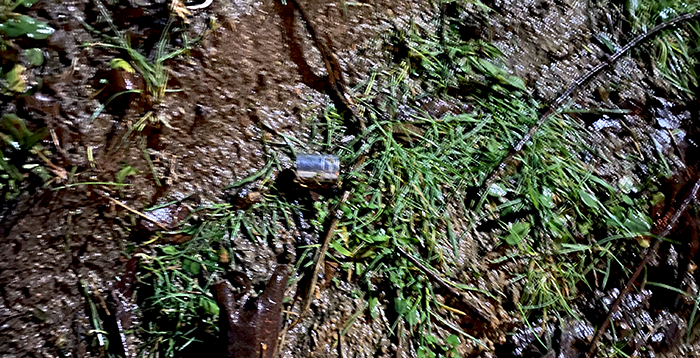 We tried to shoe-horn it into our bags, but it was too long and ended up carrying it.  Along with our trash picker and the hubcap.  Very cumbersome.

A Spirit of Children bracelet.

It took a bit to find information about this, but it is sponsored by the Spirit Halloween Store.

“Spirit of Children has been making hospitals less scary for children and their families since 2006 by providing fun and funding to Child Life Departments within children’s hospitals. It started with Halloween parties at 11 hospitals in 2006. Today we have 141 partner hospitals across the United States and Canada.”

They give Halloween parties at hospitals and donate money.  There’s something odd about making hospitals less scary by showing up Zombie Nurse. 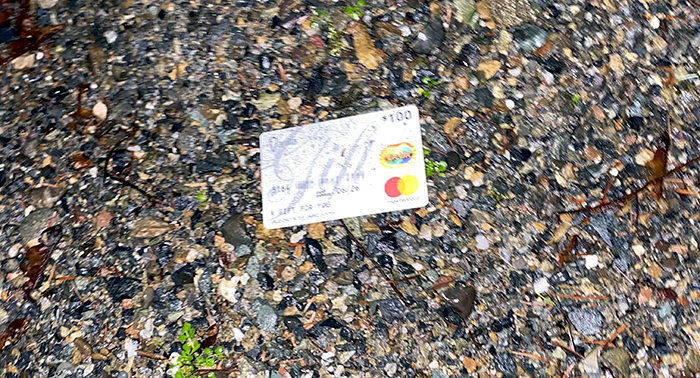 We find a lot of these that people toss when they are used up.  But we can’t help checking them, anyway.  This one had $5 left on it.  Score!  That makes six dollars today.