This is Money Monday and we found no money.  What a letdown.  We did find three gloves and two dog poop bags, but we really prefer money.  The only thing we found worth anything was another bungee cord.

It was in very good condition, but we already have over thirty bungee cords of every shape and size.  Money would have been more appreciated.

Near the Safeway gas station, we found a cover or cap of some kind.

It appears to be solid aluminum, but had no gaskets or markings.  We don’t really know what it is, other than recyclable.

We found a broken handle of some sort.

It had a lock symbol on it, so we assumed it was some kind of door handle, but it turned out to be a broken Excelerator 2.0 Squeegee Handle, about $30 on Amazon.   That seemed expensive for a squeegee handle until we watched this video.

We never knew washing windows was such an art.  We may need to buy one of these puppies.  But then, we don’t do windows.

At the top of the Tolt Pipeline on Norway Hill, we found yet another condom. 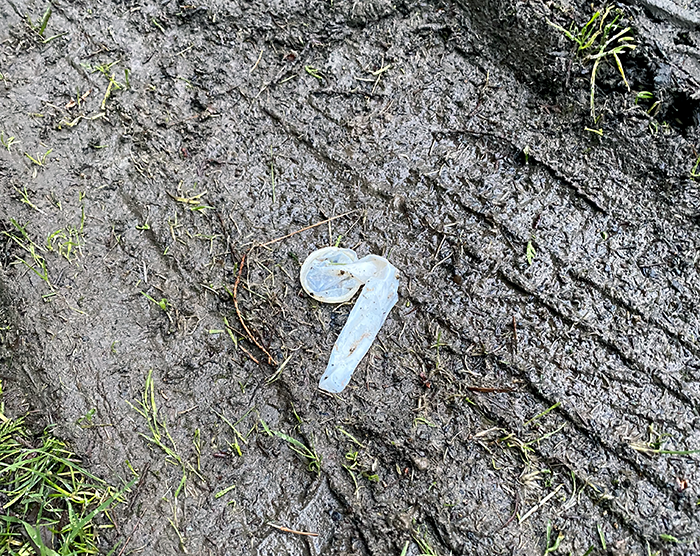 This guy’s been busy the last couple of weeks.  In the squeegee video above, at about the 3:10 mark, the guy talks about having the rubber at the wrong angle.  It appears this guy had the same problem.

It was warm today and we had a light mist the entire walk, but it was eerily quiet and we found very little trash.

At the park-and-ride, we normally wait for a line of about 25 Seattle-bound riders queued up for the bus.  This morning there were only five or six.  Also, the traffic was extremely light. 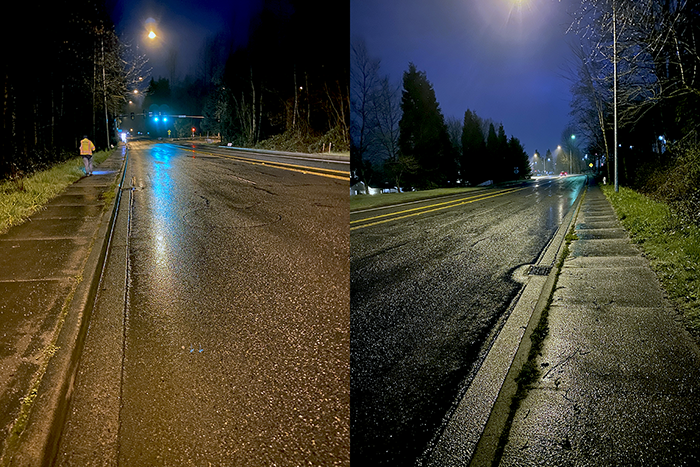 Juanita-Woodinville Way was very quiet.  This is all due to the Coronavirus outbreak in Seattle which, to date, accounts for all the nine U.S. deaths related to the disease.

This virus/disease was known as Coronavirus, then COVID-19, and now, SARS-CoV-2.  So there is a committee responsible for naming these things, the International Committee on Taxonomy of Viruses (ICTV) as explained by the CDC.  Okay, now that it’s officially named, can we get it eradicated so we can get the litter back to normal?  CoronaLitter is not very interesting.

There is one positive outcome of the Coronavirus: 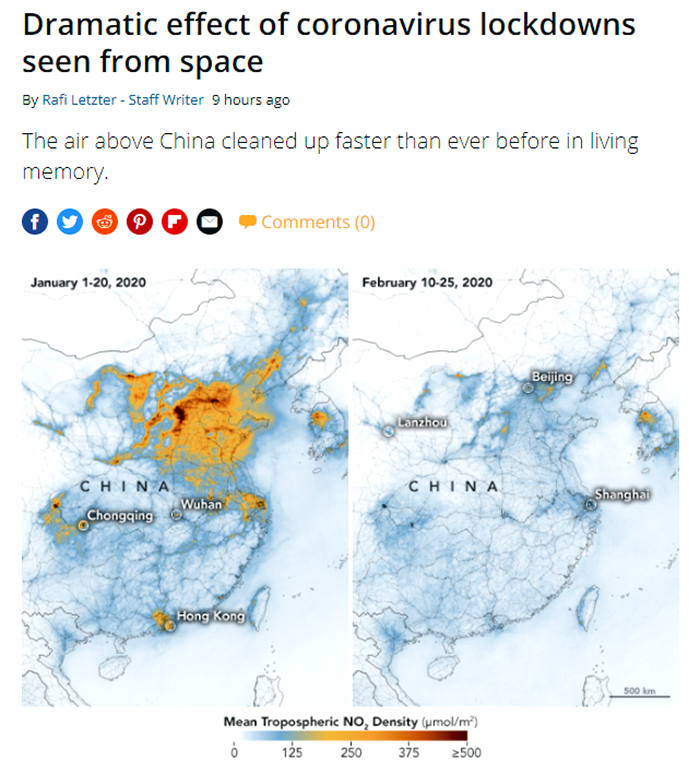 Perhaps the Coronavirus is the answer to Global Warming?

Strangely, we found another bag of cooked meat at the same location as last week. 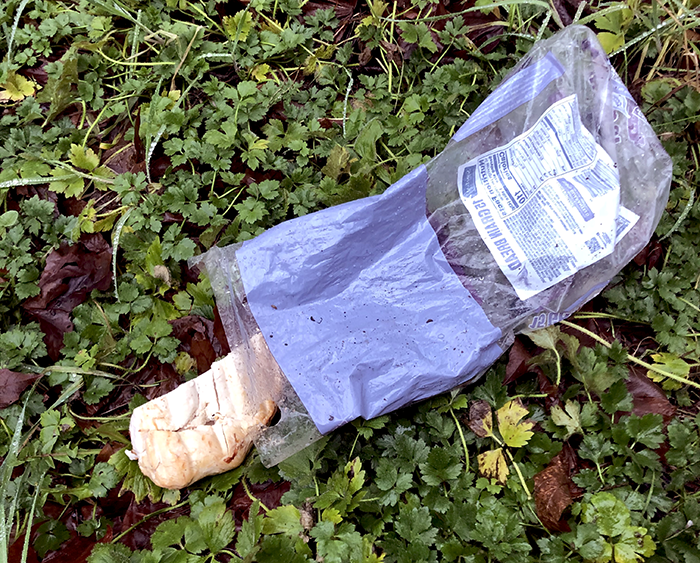 This one may have been a turkey breast, but in a bread bag.  Evidently it was a turkey 9-Grain variety.  Not sure what Janet did with it.  I need to keep an eye on our leftovers.

Our walk today wasn’t a complete waste of time, we learned about a new dog breed, at least to us.

The Shiba Inu.  We’ve never heard of this breed.  But there are at least 340 recognized breeds, so we don’t feel too bad.

We did have a “first” for us on our walks.  We saw a Bobcat.  Unfortunately, we didn’t get a picture, but it charged at us and we barely escaped with our lives!  Okay, not really.  It glanced at us, seemed bored and moved on.

We found a ball outside KinderCare.

We almost tossed it back, but it was a Kong ball dog toy.  It’s now in our ball collection.  No, KinderCare wouldn’t use pet toys for children.  Would they?

We found part of a metal canister.

It was nicely painted with 3-D wheels and doesn’t look too old.  We searched Google but we couldn’t determine its origin.  Oh, well.  Recycled.

We found a bag in the bushes along 145th Street.

It contained either dog poop from a very big dog or a carcass from a very small animal.  Based on where we found it, odds are it’s the latter.  Either way, we didn’t open it.  Our curiosity wasn’t strong enough to overcome the sight of either possibility.  If anyone is really curious about it, its in our trash can, so feel free.

We found some marijuana trash.

What caught our eye was the syringe-looking device in it.  It turned out to be the container for the oil.

On their website, was a picture of the contents. 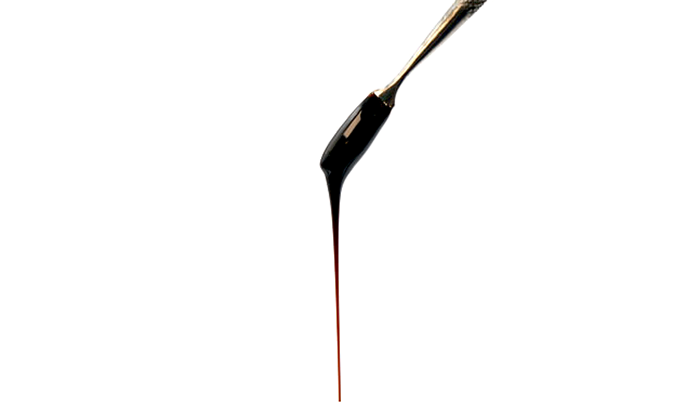 This doesn’t look like anything we’d want circulating in our lungs.  This or the COVID-19?  It’d be a tough decision.

Early in our walk, we found a rake. 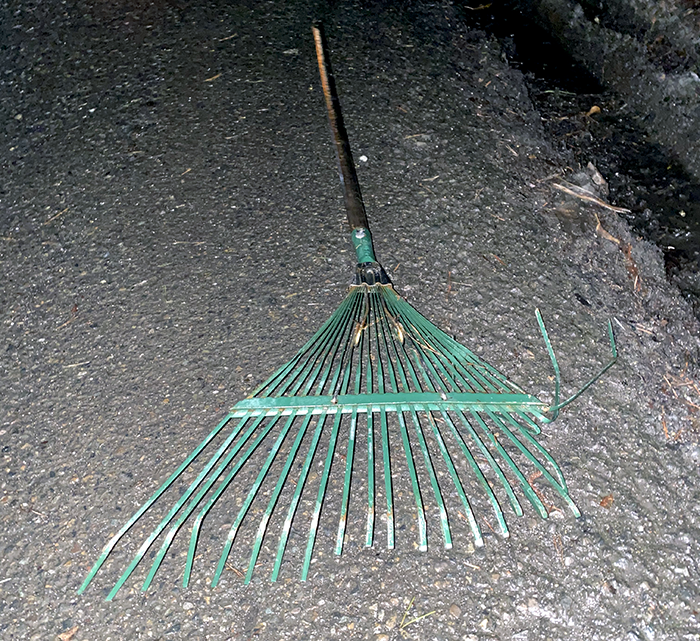 It was beyond repair and is headed for recycle.  However, we thought of a final use for it before its demise.

Before the holidays, someone plastered signs round the neighborhood advertising installation and take-down of lights.  Of course, they succeeded on the installation of their signs but failed on the take-down.  We removed the ones on our walks within reach, but two were tacked high on telephone poles.

They aren’t up there anymore. 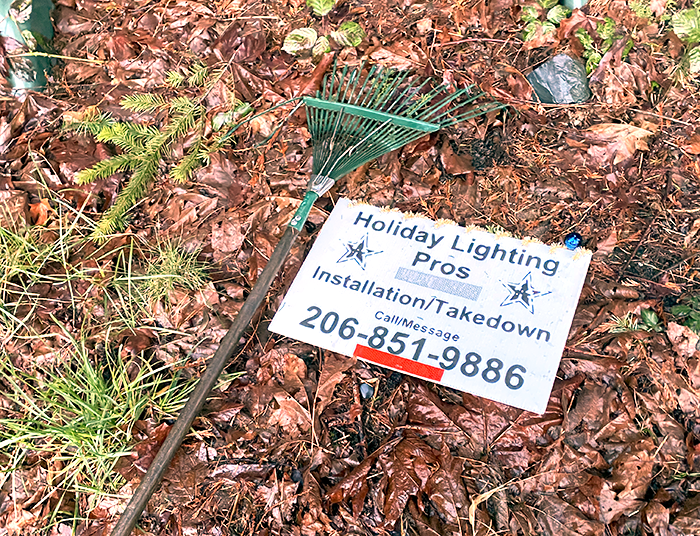 We had a quick walk today.  We got a honk from a Metro bus driver and waved to Salinas Construction.  Again, traffic was light and the queue at the bus stop had seven riders instead of the normal twenty or so.

We are starting to see a trend on our walks.  Up Norway hill from our home, for the last four days we have picked up wine boxes.

Chardonnay?  Not our favorite.  We’ll see if this trend continues.

Early on our walk, we found another Toyota hubcap.

The bad news is, it was damaged.  The good news is, the 7-Eleven dumpster was nearby.

Well, someone dropped the ball.

We seem to be finding a lot of dog balls lately.  The toy kind, not the other kind.  “Here Fido, fetch.  Fetch!  Fido the ball!  Look!  All right, I’ll get it myself, but this is the last time.”

At the top of Norway Hill at the Tolt Pipeline, we were met with this mess.

It was a mixture of food, pot and vaping product wrappers.  As we arrived, the crows were picking through it, probably for the food, but you never know with crows.  They were not happy with our arrival.

There was a receipt in the trash.

It’s from the Nirvana Cannabis Company in Lynnwood WA.  $163 up in smoke.

At the same place, we also found part of a vaping device.

After some Googling, we found it was an Orion Pod.  It sounds like the title of a Star Trek episode.

Hmm.  “direct-to-lung” vaping.  Need we remind you of what we are talking about?

Wow!  Combining Friday-light traffic with the Coronavirus shutdown made for very light traffic.

This is the stretch of road by Safeway that is normally moderately busy.  Zilch traffic.

Near our home, another wine box. 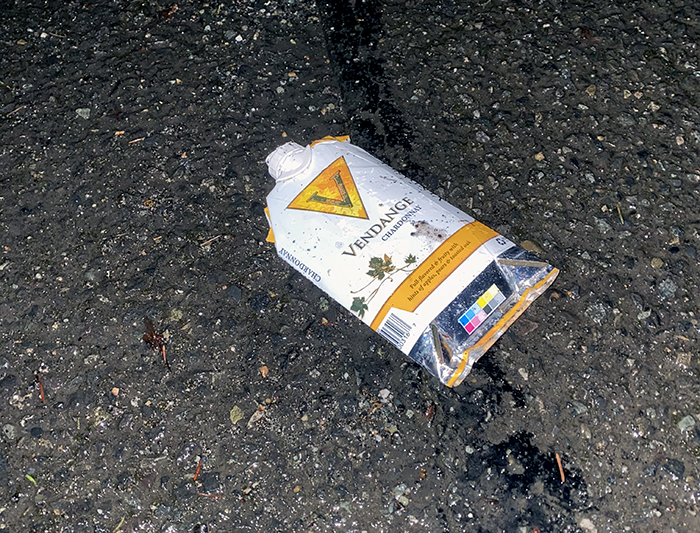 Perhaps the McLitterers have mellowed out?  Does McDonald’s now serve wine?  Well, no.  Some serve beer, but none serve wine at this time.

Hey, Buddy.  You don’t need to make these anymore.  They’re legal in Washington these days.

The baseball was outside a school where we’ve seen the team practicing.  We tossed it back into the playing field.  The second was a tennis ball out side the KinderCare.  It wasn’t a dog toy, so we also tossed it back.  We’re pretty good at shagging balls.

At the townhouses on 112th, there seems to be a sudden increase in homes for sale. 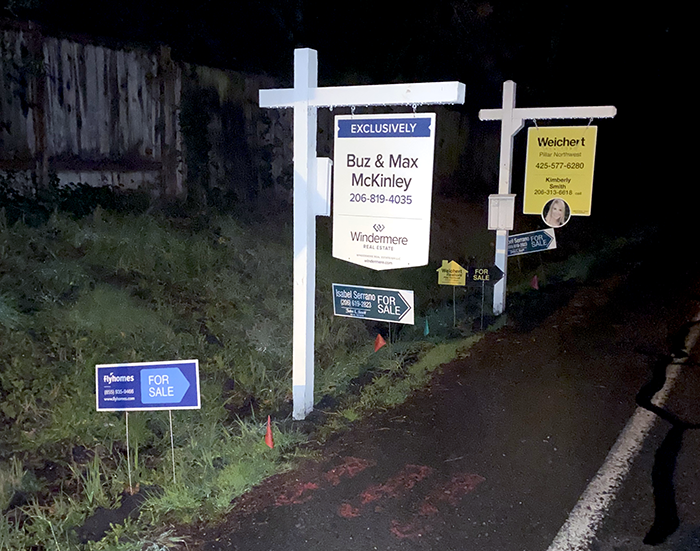 Fallout from the Coronavirus scare?

There’s currently a shortage of several products including toilet paper. 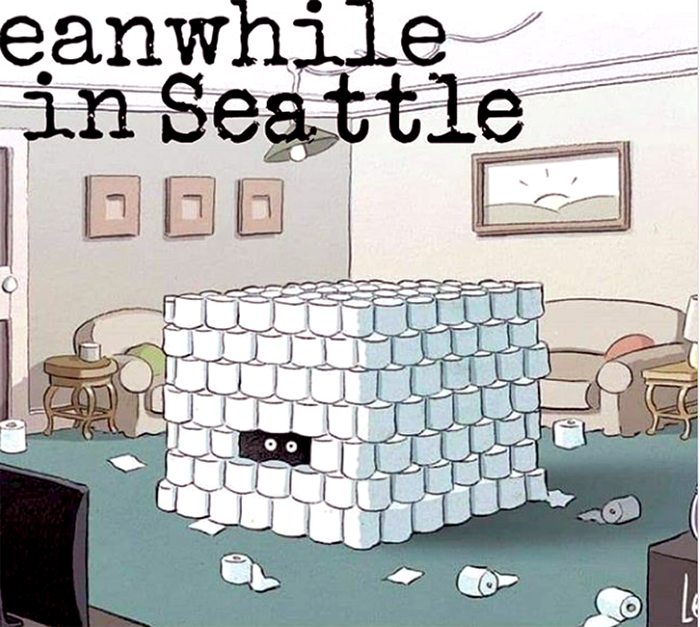 This explains it.  Evidently toilet paper is an effective filter for the Coronavirus.

Our walk today was dry.  We covered our seven-mile walk this morning in four hours.  There was a normal amount of trash, but plenty of garbage and recycle bins left out for us to unload our burdens.

Wrapping up this week’s gloves and dog-poop bags, with the Coronavirus situation, we found more gloves than usual.

Eighteen gloves, many of them pairs, and eight dog bags.

The electric utility has been replacing all the old electricity usage meters with new ones that can be read remotely.  They replaced them at a traffic control box half way down 112th Ave NE.

And left some litter for us to pick up.  The strange thing is the nearest traffic signal is about 1,800 feet away.

We found a couple of tools today.

A socket u-joint and a Skil Twist electric screwdriver.  The socket u-joint broke at one point and someone put a screw in it to hold it together.  That’s probably why someone tossed it.  The Skil was buried except for part of the handle.  We tried to turn it on, but it was dead.  So, in both cases, we were screwed.  Or maybe not screwed?

At the park-and-ride, we saw some cans in the parking lot and crossed over to

This time they didn’t leave a full one for us to split like last week.  We did pull the pop tabs off the cans.  We collect them for one of our neighbors.

However, we pulled two cans out of a paper bag in the ditch.

They pulled the tabs off before tossing the cans.  Bastards. 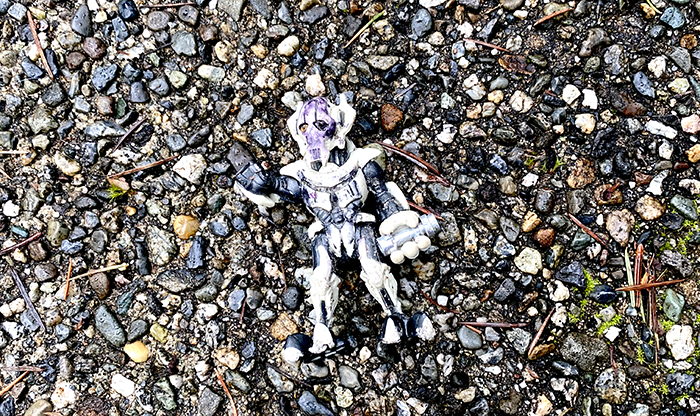 We’ve lost track of the Star Wars characters, but Google Lens seems to think it’s a character called General Grievous.  This was later confirmed by one of our grandkids.

At a bus stop on Brickyard Road, we’ve been slowly cleaning the trash out a ditch.  We’re getting close to finishing, but today we pulled a large wicker basket out.

When we opened it, we found a soaked hat in very good condition.  It’s a VW Variegated GTI Hat.  $23 at the VW Accessory Store.

We found several articles of clothing today.  A pair of socks.

They didn’t match, so they’re probably not worth much. 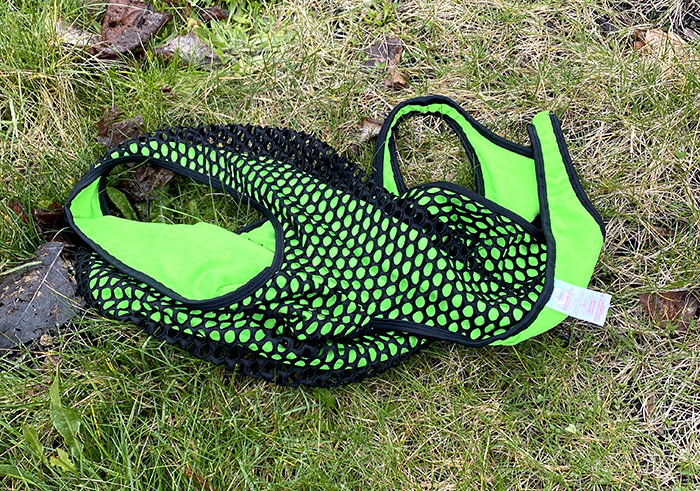 Then, a pair of Safety Glasses. 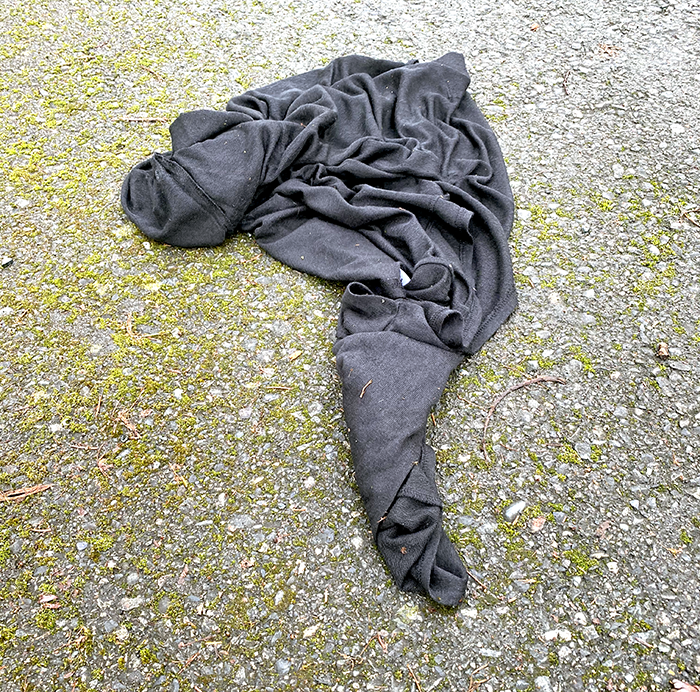 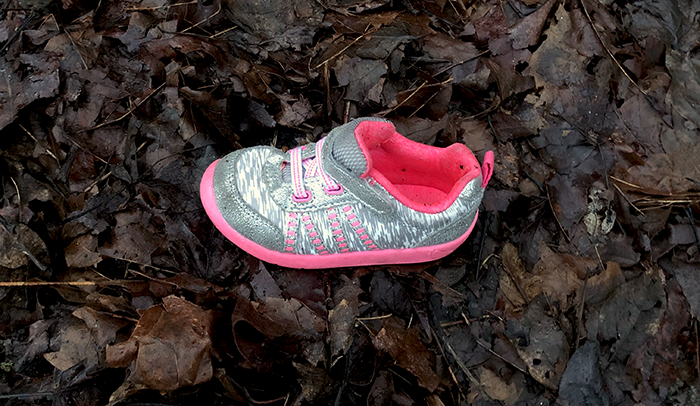 Garanimals Girls Basic Athletic Shoes, $2 at Walmart.  but we only found one, so call it a buck.  That’s a total of $121, not counting the socks.  That’s a good haul.  Goodwill will be happy.

It’s not an item of apparel.  Well, guess it depends on how you define apparel.

Not far away, we found a third of a hot dog.

It probably has nothing to do with the condom.  At least we hope not.