Today was cold with no rain. Through the week, the weather is supposed to warm up with all sunny weather, but today it was back to using a handwarmer.

We started the week out right finding money.

Ok Janet found a dirty and corroded penny, but we’ll take it. It means the pressure is off for the rest of the week. We can’t be shut out.

We found this complaint note near the apartments on Juanita-Woodinville way.

Wonder how that worked out for him? Probably like the guys driving around with parking tickets under their windshield wiper hoping they will blow away and claim they didn’t see it. This one was successfully lost.

Okay, half a candy bar. Thanks, but no thanks.

At the Safeway shopping center, more intellectual partying behind the Party-for-Less store.

Last time there were more beers and a copy of a foreign affairs journal. Today was a copy of “The Right Side of History” by Ben Shapiro and only one beer. It must have been a sobering book.

We picked up more clothes.

A pair of socks and a face mask also behind the party store. Then, at the top of the Tolt Pipeline, a jacket that had been buried in the bushes a long time. Or it could have been a tote bag, there was not enough left to make a firm decision. Either way, it ended up in the garbage.

Another new brand of cigarettes, Capri.

Or so we thought. It turns out the brand started in 1956 and relaunched in 1987. Wonder how many millions they spent on the logo? Our grandkids could design that. “PLEASE DON’T LITTER.” A lot of good that did.

We will let the ball dry out, but the vote’s still out whether it gets into our ball collection.

We picked up a very heavy lockbox buried in the bushes along 145th and hauled it home.

Someone did their best to hack, literally, into the box to no avail, and in frustration tossed it into the bushes. We may sell it back to the company for advertising purposes showing how secure their boxes are. Or we may attempt to hack into it ourselves.

As predicted, this morning was cold and clear. We used hand warmers, but the walk was still a bit uncomfortable. However, we did find some significant money.

Chuck found like 25 times what Janet found yesterday. Thank you very much!

At the park-and-ride, someone lost their watch.

And we found it, or at least part of it. We didn’t find the inner workings, only the case. The brand is Megir and looks like they sell for about thirty-five to fifty dollars. Not a big loss for the owner.

Also, at the park-and-ride, a mostly full pack of cigarettes.

“I’d walk a mile for a Camel.” And we did, about five-and-a-half miles.

We picked up some tools today. 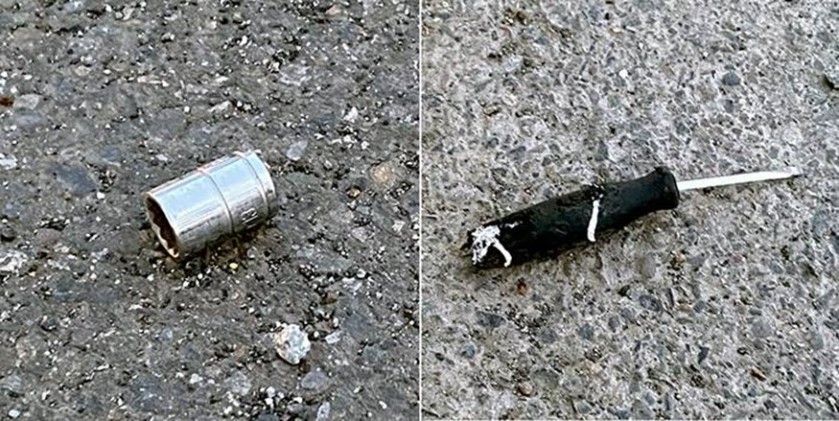 A nice socket and one of those screwdrivers used to screw in screws at an angle.

It looks like our walks down Juanita-Woodinville Way are about to get a bit tedious.

We walk this stretch five days a week, but we are normally past this point before 7am.

The mornings are getting warmer and more comfortable. If this keeps up, we may remove a layer of clothing or two. It would certainly lighten our load. We didn’t find any money today and had to remove a roadkill rabbit from Juanita-Woodinville Way.

Weird. We found another watch! Two watches in two days. That has not happened to us before.

It was a Forsining 207 watch, $31 at Walmart. Except for the band, it appeared to be in good condition and one of the cool see-through watches. It is self-winding and, if we shake it for a few minutes, we can get it to run for a while before it stops. Okay, we are willing to part with the watch for a cool ten bucks, as-is. Yes, you’ll need to replace the wristband. And, well, full disclosure, we found it on Juanita-Woodinville Way meridian that had freshly been mowed. Okay, five bucks.

Our toolbox runneth over with sockets

We picked up a cup.

Okay, normally a cup is not something we would take a picture of, but this was a challenge. On Juanita-Woodinville Way, there is a bridge across a small creek. They put a fence with bars to keep people from attempting to jump from the bridge and getting their feet wet. Anyway, someone threw a cup over the fence to see if it got wet, but it got caught on a ledge. We spent a good five minutes of our lives stretching our arm plus picker through the bars to, millimeter-by-millimeter, coax the cup within range to retrieve it. So, yes, admire the cup.

Another fine day for walking and it turned out to be a long walk, due to extracurricular activities. We didn’t find any roadkill but did find money. Chuck found another quarter.

It was in the intersection at the 7Eleven. But wait, like Ginsu Knives, that’s not all!

Not only folding money, but a folding twenty-dollar bill in the gutter. We’ve only had one bigger find, two twenties together. We can retire, NOT. Although the rewards are nice, we are doing it for the exercise. No, really.

One of the reasons this walk took a lot of time is we picked up several of the “Forced Auction” signs that the scammers plastered the area with.

We left four at a bus stop hoping they get picked up when Metro empties the trash, these six at one corner of the park-and-ride and four more at another corner. Finally, two more at an intersection with another downed sign. In all, we stacked up sixteen of the signs. Yes, we’ll probably need to pick them up with the car, but we can dream, can’t we?

Yes, we count a bungee cord as a tool, but this one was beyond recovery and got recycled. On the other hand, we found a pristine Snap-On socket. Even used on eBay, it is selling for $26. Snap-On thinks a lot of their tools.

We pass a deep ditch near the intersection of 160th and Brickyard road and often see beer cans and other trash. We have picked it up several times, but today we saw the reason.

Obviously, this is the hangout of some beer-drinking raccoons. This one is reaching into the culvert for another cold brewski and probably a bag of chips too. And to think we have been blaming humans all this time.

It was even warmer today at 44°F (6.7°C). We will dress cooler tomorrow. Cooler in the temperature sense. We always look cool in the fashion sense with our jeans and matching Salinas Construction Paving Team vests. 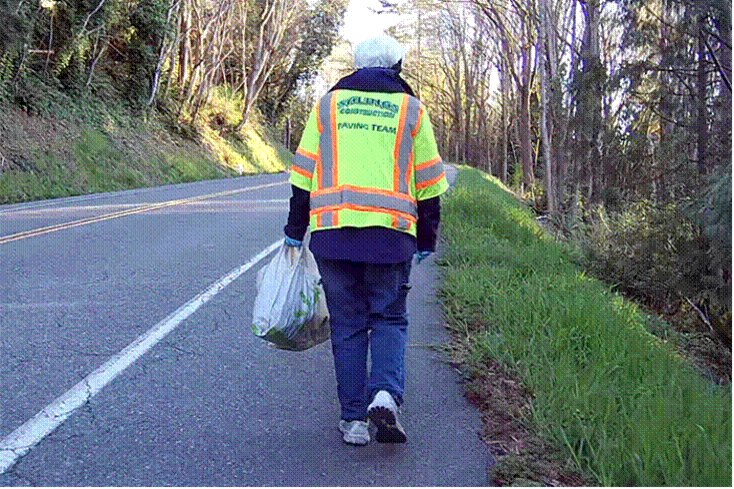 We found no money today and removed a roadkill rabbit.

At a bus stop, we found a dropped men’s wallet.

This normally triggers a search for the owner, but this wallet was totally empty. Our suspicion is that someone got a new wallet transferred the contents and tossed the old one. So instead of being a victim, he was a common litterer.

At the same bus stop, there was an Awesome Keychain attached to the fence.

Go ahead, ask us how we knew it was awesome.

A sharp drill bit. Sharp in the cutting sense. We don’t know how smart it is.

Another tool along 100th Ave NE. A broken trash picker.

Now, this is a bit worrisome on a couple of levels. This is the same brand of picker we carry. How did it get destroyed? Did it fall apart or was someone picking up trash and get hit by a vehicle? That would be bad. But what is worse, what the hell is he doing in our territory?

Today, Janet attempted to even the money score. Janet started the week by finding a penny. Then Chuck found the twenty-dollar bill and two quarters.

On today’s walk, Janet made a valiant effort.

She found twelve cents, then a nickel and finally a quarter for a total of forty-two cents. A nice run, but Janet’s score is 43¢ versus Chuck’s $40.50. Nice try, though. NOT!

Last Saturday, we found a Dollar Tree store bag with a melted candle in it. Today we found a tortilla bag.

It had another of the same candle in it. We know we didn’t miss this last week because it was in plain sight on the opposite side of the road. What’s with the candles? Are they trying to burn their candle at both ends? If so, they are not the brightest candle on the cake.

What? Take a seat? Take a bench? We decided it was the sign, so we took it.

Well, this was embarrassing. We disturbed a couple of lovers at the Sammamish River Park. 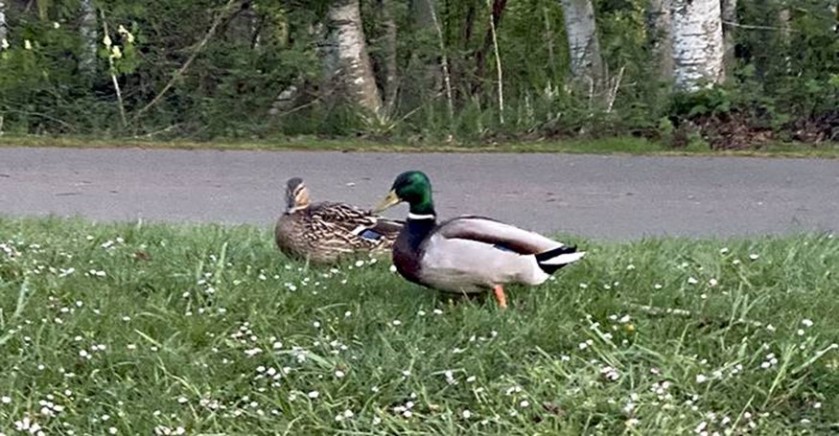 She was cute, what a lucky duck.

Last week at our “favorite” trailer park, we found a lot of furniture someone dumped by the side of the road.

Today, there were only a few items left, so progress.

Last week, we crawled into nearby bushes to pick up trash that someone, most likely residents of the trailer park, dumped, so we picked it up. Today, in the same spot, there was fresh trash. 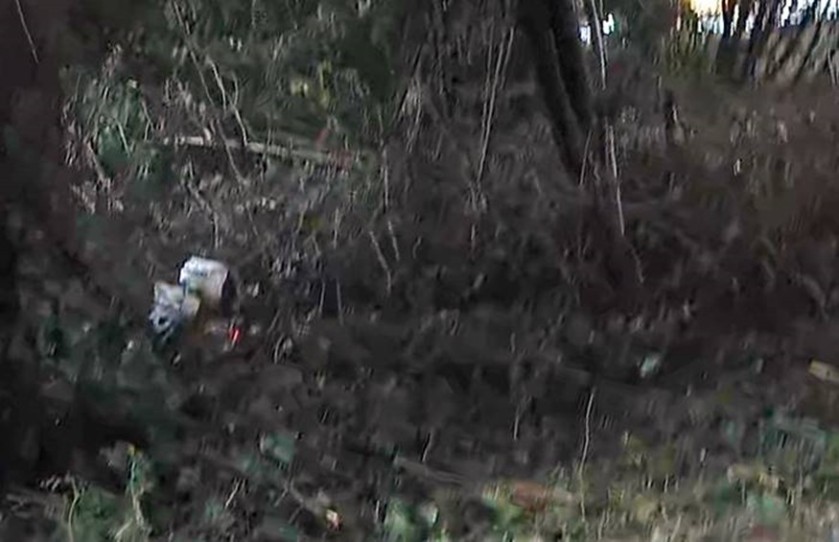 We decided it the people want to live in trash, who are we to destroy their dreams. We left it.

From the road, we can view their park from above. 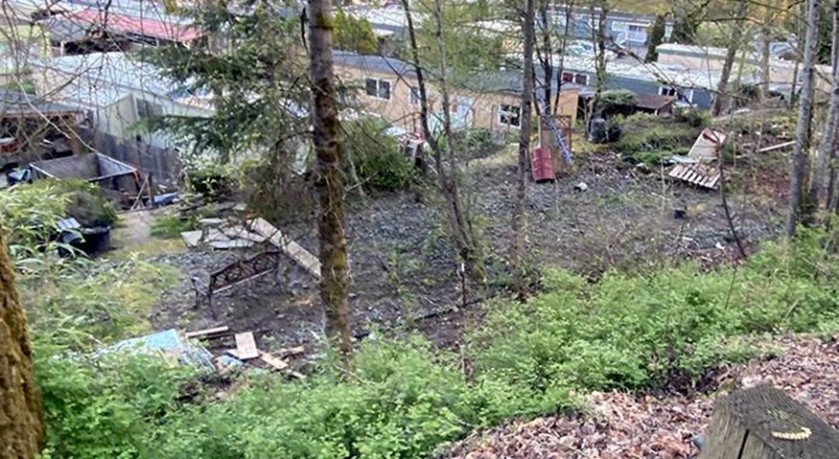 Now, this is a tool.

A pair of diagonal cutters, shiny, not run over and no rust. Life is good.

Well, someone had a busy night.

An empty carton of 12 condoms. Gotta admire the guy.

But you need to squeeze the trigger, not pull it.

We found someone’s Last Will and Testament.

We checked. The person left us nothing. We hate being left out of the will.

Then there was this. A five-course meal.

A take-out teriyaki and four bottles of Platinum 7x Vodka.