To start the week, the weather was warmer so we shed two layers of clothing including our rain jackets. It was slightly uncomfortable at the beginning of the walk, but nice at the end.

Starting the week out right, Janet spotted a shiny penny on the sidewalk. 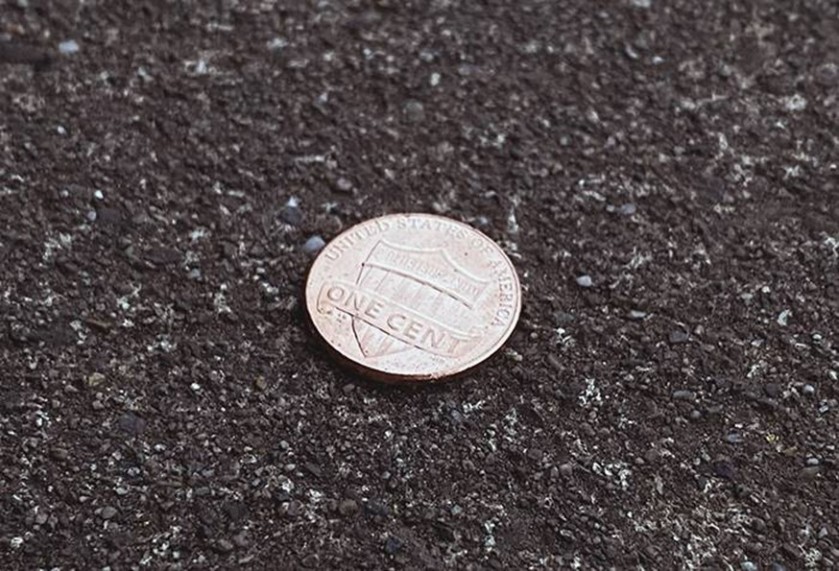 Perfect, we won’t get shut out this week.

There was a moderate amount of trash, but little of interest. Like this handkerchief.

Do people use handkerchiefs anymore? Or is it really a do-rag? If it is, it’s pretty wimpy. We can’t picture a guy wearing this on a chopper.

On the way up Norway Hill, we spotted a glint of something in the ditch. 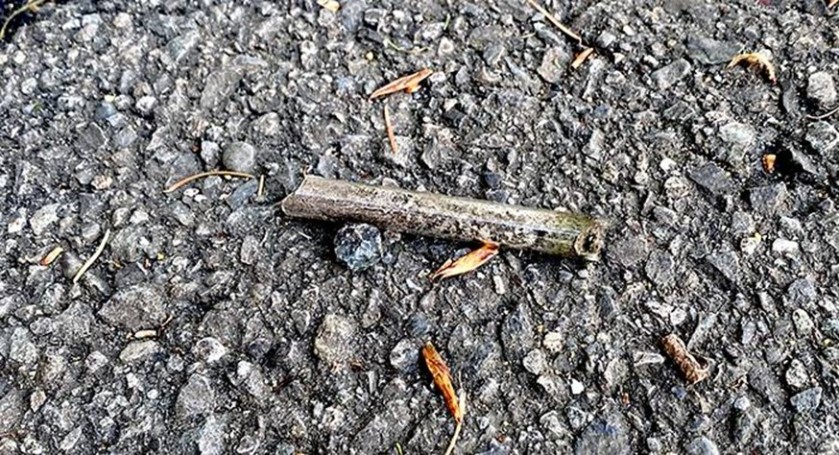 It was another cracked crack pipe. We didn’t find the bowl, only this broken stem. It had been in the ditch for a long time. A pretty ho-hum day.

Another nice walk today. We removed a roadkill squirrel, we think, but found more money.

Two cents, double from yesterday. It would be great if every day we found double the day before. If that happened for the week, we would end up with $1.63 which would not be bad for the week. But wait, if that kept up for four weeks, we would have a total of 2.7 million dollars. Come on, folks, you can do it.

We saw an old friend today. 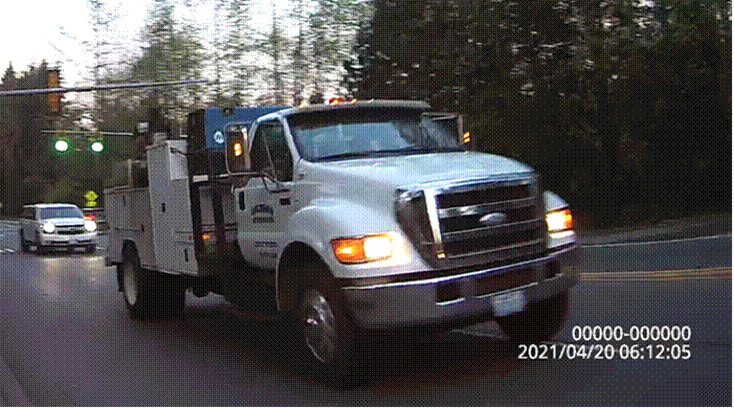 This is the Salinas Construction driver who gave us our vests four or five years ago. We used to see him nearly every Tuesday and Thursday but haven’t seen him for over a year. We thought perhaps he had retired. Or maybe he was avoiding us.

Someone lost their courage.

Well, their courage bracelet anyway. Courage is not something you wear on your sleeve, or wrist.

At the park-and-ride, this was a bit worrisome.

Where we typically find five or six empty Coors Light cans, we found an empty thirty-can Coors carton. But no cans. Eerie.

Also, at the park-and-ride, we found a twisted BMW key.

“Fun night at the pub tonight. Thanks for dropping me back at the park-and-ride. Talk later. Damn, the lock is stuck. Oops, wrong car.”

We found a pair of leg warmers or arm warmers. 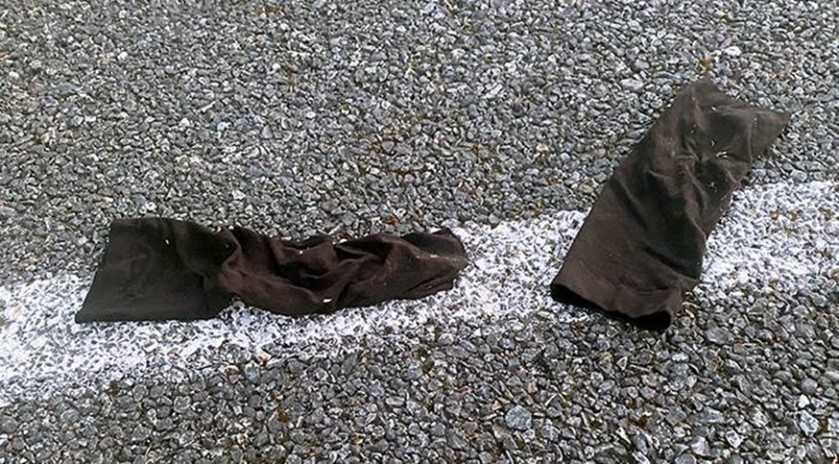 They are either arm warmers or leg warmers for a very short person. Or toeless socks.

We found a tool, unfortunately.

At the 7Eleven intersection, we found a claw hammer. It was a heavy tool, but we took it. Then, as we crossed the street, we picked up two more pieces of lost metal. These were not easy to carry, to hammer the point home. Get it? Oh, never mind.

We removed a roadkill rabbit from the road and got a very nice thank-you from a guy fueling up at Safeway.

We really appreciated it until he compared us with his grandparents picking up trash. He’s at least forty years old. Good grief.

We did feel better after finding more money.

Two pennies and a quarter. We are now twenty-three cents ahead of our march toward our 2.7-million-dollar goal. When we reach it, we will throw all our donors a huge party.

We found a hubcap.

We normally hate hubcaps because they are bulky to carry. But this one was only about five inches in diameter and fit easily in our recycle bag, and yes, it got recycled. But wait, it’s in good shape and $17 online. We may need to retrieve it from our recycle bin.

We thought we saw another hubcap, but it was a tossed CD.

It was cracked and too dirty and scratched to play, but we looked up the group, Motakai and, surprise, it’s a rap group. We listened to a few of the songs, and some are unique, but some of the words that we could understand, we would not want our grandkids to hear. But they probably already have.

Behind the Party-for-Less store is always interesting. Today, it was a bunch of Cheese Balls.

Don’t ask us. No beer bottles or wrappers, only Cheese Balls. No, we left them. Let the squirrels get fat.

Also, behind the party store, we found a sticker of a crippled dog.

Hey, we can’t answer all the questions, we can only report what we find. And this wasn’t even in a handicap parking space.

We did find a cat toy.

There is supposed to be a bell inside, but this one only has a couple of plastic beads. What’s with that? Could it be the drug cartels are smuggling catnip?

We doubt if pushing the button will help.

Someone came over the curb and destroyed the solar-powered crosswalk sign. We’ve seen several of these across-the-sidewalk incidents recently. It’s like they are targeting pedestrians. We’ll start walking in the street, thank you. Sidewalks are dangerous.

We found a handle with a broken strap.

We determined that this is a broken piece of exercise equipment, and from our research, nothing good can come from one of these breaking.

As you are aware, we are on our goal of 2.7 million dollars in a month, but we didn’t find any money today. However, accounting for yesterday’s find we are on the plus side by nineteen cents, so still on track. We’re not worried that you will come through.

Today is our Thursday route which route traverses Juanita-Woodinville Way NE where construction is scheduled for the next two months. We wanted to see if we could make it through the combat zone by the 7:00 am construction start time. We had two major delays. First, near the intersection of Brickyard Road and 160th, a completely smashed hubcap.

We could tell it was a Toyota, though. We spent a bit of time picking up the pieces. Also, the spring ring that reinforces the plastic hooks was several feet away. We picked it up and tossed it into the pile of shards to get a photo, and it proceeded to roll and bounce about thirty feet away. Just great.

The second major slowdown was at the intersection of 112th Ave NW and Juanita-Woodinville Ave NE.

A Levolor blind was dropped and run over. We picked up several of the larger pieces, but it was a bit embarrassing with the lineup of traffic. We ultimately removed the big piece and left the shards for later. Ultimately, we made it through the “combat zone” with a few minutes to spare.

This did not slow us down much, but at the freeway onramp, a Honda emblem.

It was made of metal and about five inches wide. Not bad. We put it with the rest of our car emblems we’ve collected.

A guy drove by and yelled, “Good Job!” and gave us a thumbs up.

As he drove off, we asked, “Do you know what the hourly pay is?”

We did find clothing today, a leather belt in the middle of the road.

It looks better than it is. Goodwill may reject it.

Also, a cap in the park-and-ride.

Okay, perhaps not a cap, but a cap liner? We’re pretty sure Goodwill will accept it.

Today, we found no money. Okay, we are still eleven cents ahead of our goal of 2.7 million dollars, but the trend is not looking good. You really need to pick up the pace and toss some real money to keep the drive going.

We also removed a roadkill squirrel and three rabbits. And to reinforce our growing fears about sidewalk safety, one of the rabbits was not in the road.

It was on the sidewalk. Probably trying to get back to safety on the road when it was rundown by the car.

We did find another tool today.

A Sawzall blade. Or is it the outline of a prehistoric centipede?

This was about 2.5 meters or about eight feet in length. We’ll go with the Sawzall blade.

We found a survey control point marker but couldn’t see where it came from. 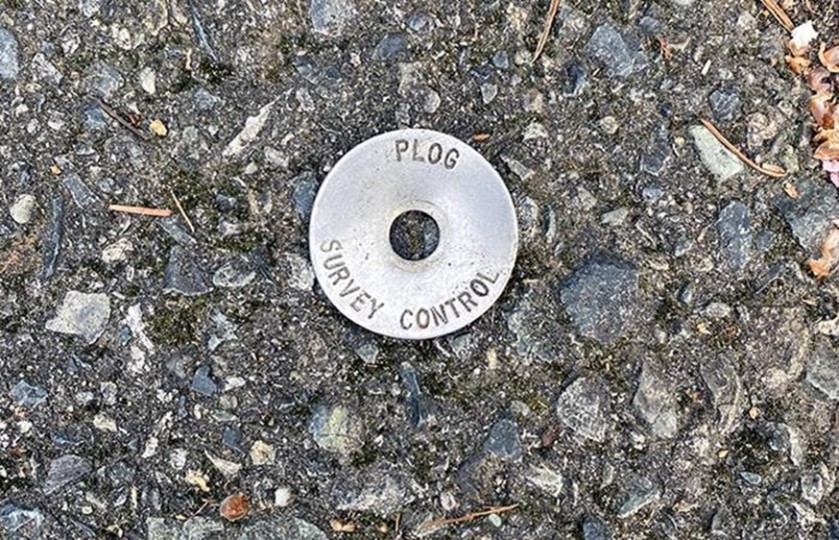 Tomorrow, we’ll move it about twenty feet from where we found it and nail it back into the pavement. That should confuse things. You’re welcome.

We collect a lot of litter that ends up in our recycle bin. Much of it, especially in the winter is messy and our recycle bin becomes a mess. With a change in garbage companies, we received a new recycle bin and determined to keep it cleaner. We started lining it with cardboard and have been collecting random boxes.

Today, we found the motherlode. Unfortunately, we could not haul it home and today is collection day. Treasures lost.

We found a lost key fob.

There was no way we could see to return it to the owner. We understood all the buttons except for the x2-double front-flip. Oh, well.

On the way up Norway Hill, Chuck spotted a pleasantly-unique-looking plant.

Using an app to identify plants, PlantNet.org, it was determined to be a Poison Hemlock. No problem we are still wearing gloves.

Then we found this.

The bag was empty. So, what did it contain? We do wear gloves and disposed of the bag. However, what did it once hold? We probably don’t want to know.

So, what are biohazards? We found a site that included the following examples.