We had a house guest today, so we cancelled our walk. Yes, a lame excuse, but there it is.

We had a gusty, rainless walk this morning. Also moneyless with no roadkill. True confessions, we did find a dime in a parking lot on Sunday and toyed with the idea of counting it as a walk find. However, we thought it would eventually come to light and there would be Congressional hearings, subpoenas, and the lot. So, it is now in Janet’s piggy bank. 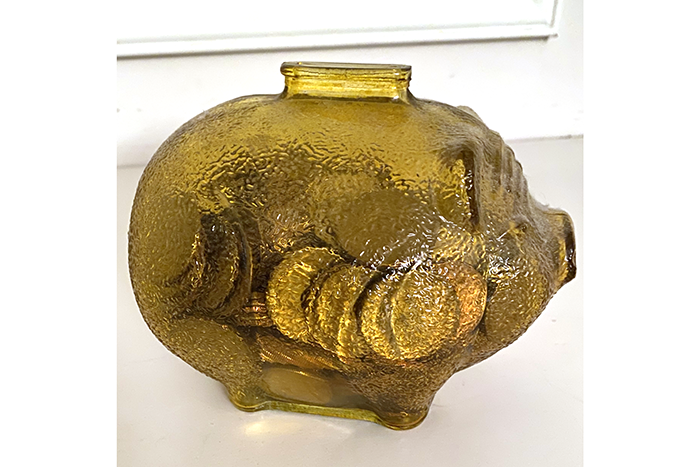 Oh, well, off to the start of another moneyless week.

We came across an unsmoked cigarette. 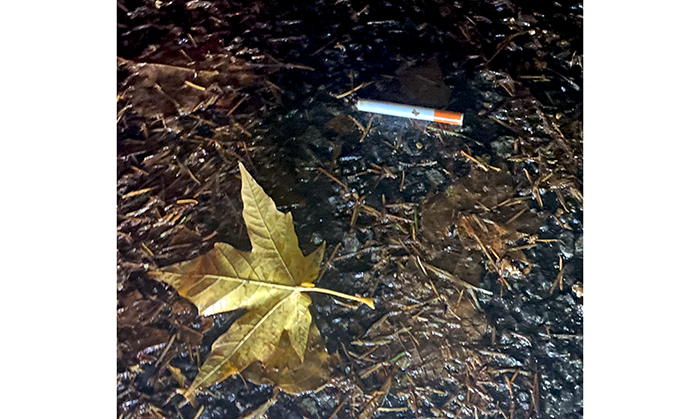 Okay, it was not a cigarette, but a discarded vaping device designed to look like a cigarette. What gives? We would think more highly of a vaper than a cigarette smoker. Not because vaping is healthier than smoking, it isn’t, but the litter from cigarettes is greater than vaping devices. In our experience, the vaping devices also get littered, like this one, but the quantity is much less.

At the park-and-ride, if the shoe fits, wear it. 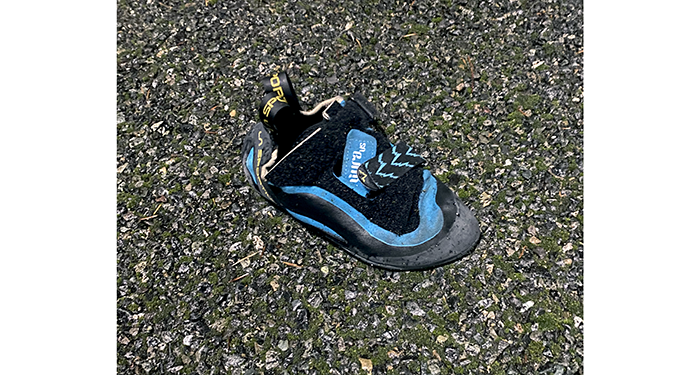 It didn’t and we didn’t. There was only one, anyway.

We found a discarded pot jar.

Green Rush Golden Panda. The most interesting thing about marijuana trash these days is the variety of names and Golden Panda is not particularly interesting. However, they left a few buds in the jar. Tempting, but we have never imbibed, even in the Bay Area in the sixties. We do not need a new vice.

We had a nice, calm walk today with no wind, rain, or hail. Regardless of the weather, we found no money and no roadkill. But the variety of trash seems to have picked up. [pun intended]

Since the start of the pandemic, we have found several clean masks in sealed Ziploc baggies. We have speculated that these were provided by an employer like Safeway or McDonalds to their employees but could not imagine why the employee would toss them. Today we found another one. 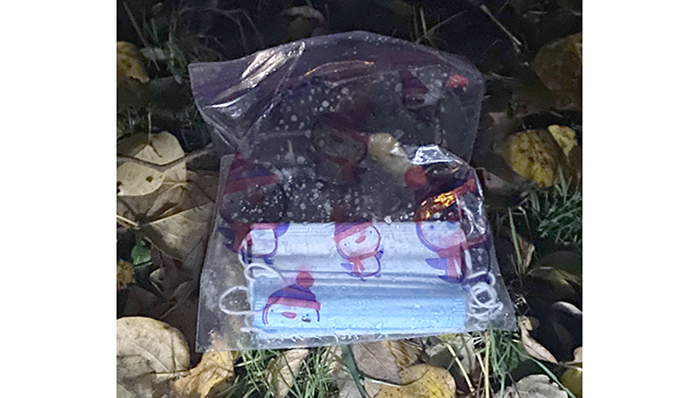 This time it was in a holiday-themed Ziploc baggie. So probably not Safeway or McDonalds. Perhaps someone’s mother packing his lunch and adding some masks? “Sheesh, mom. I’m forty-two, I can get my own masks.” At least the masks didn’t have Winnie the Pooh on them. 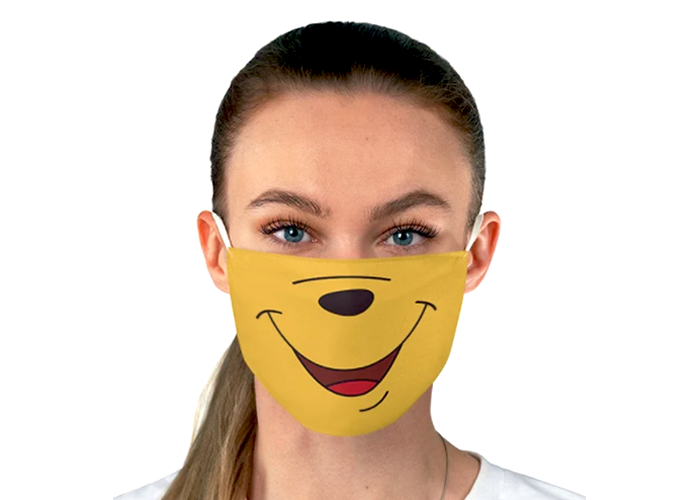 At the KinderCare, we found a toy tossed over the fence. 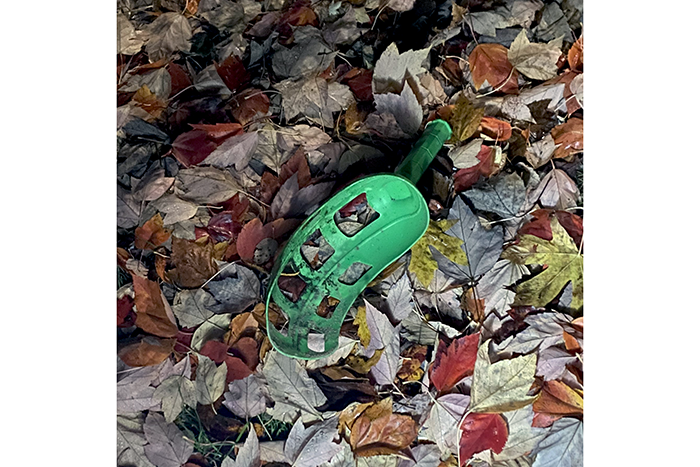 Okay, we can see the Jai Alai ball getting tossed, but the scoop? Okay, Chuck has only been to one Jai Alai match in his life and it was a long time ago in Miami. And there may have been gambling and beer involved, so “scoop” may not be the proper terminology. In fact, according to Wikipedia, the proper term is a cesta. But who cares? KinderCare probably does not serve beer anyway.

Wednesday is our week to do the extra walk a block south on 100th Ave NE.

And our beer-drinking bus rider did not disappoint. Five empties at the bus stop. When we dig these out of the bushes, we remove the pop tabs (another story) and crush the cans by stomping on them so they do they are more compact to carry.

However, today there was a rider waiting for the bus. 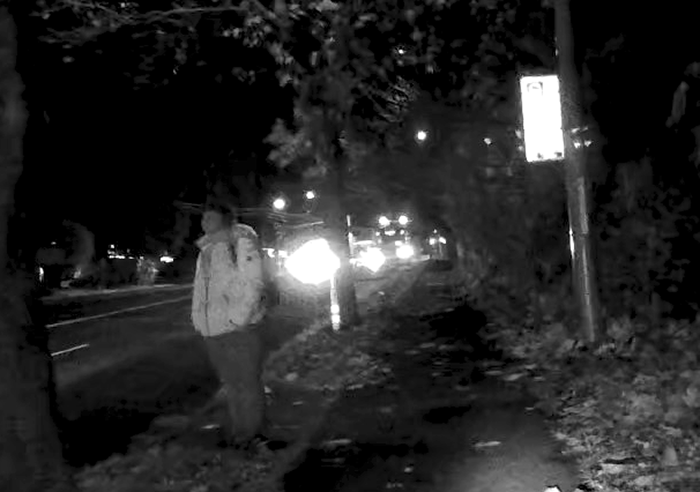 We said “hello” to her when we came toward the bus stop and again when we left. She ignored us both times. Well, if we were her, we would ignore us too. Anyway, we did not think it would be a good idea to start stomping on cans with her there, so we waited until we were in a less-populated area.

Last week, we reported on the plight that Pinkie Pie was missing.

We were not familiar with either, but we were able to track them down on the Internet. The one on the left is Juanita High School Ravens. The one on the  right is the Lake Washington High School Kangs as in kangaroos. The Ravens are in Bothell and the Kangs are in Kirkland. So, who would win between the Ravens and the Kangaroos? We think it would depend on whether it is a race or a boxing match. 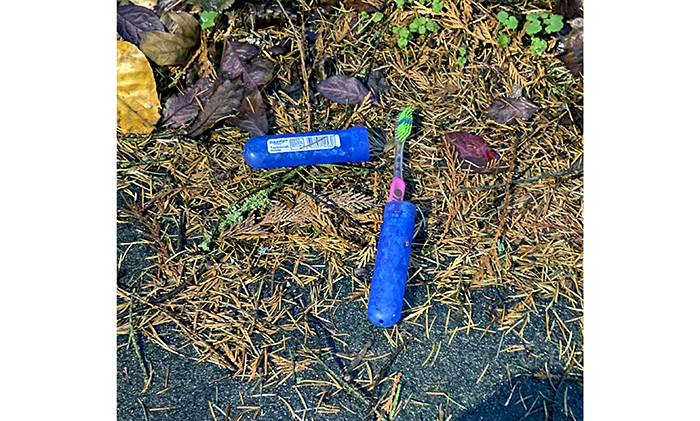 The brush itself has Seattle Seahawks Football colors and they are not doing too well recently. Perhaps the guy prefers bad breath to bad football.

At this time of year, a lot of folks are waiting for the trees to finish dropping their leaves to begin cleaning up their yards.

But there is always the one lone holdout. Okay, maybe next week.

This morning we wore our rain gear and there was a continuous light mist throughout our walk. Since we expanded this route to include the segment to the Tolt Pipeline east side of I405, it has gone easier each week. But there is still a lot of new trash to slow us down. Again, no money and no roadkill, but we did come across some wildlife.

About halfway across the freeway overpass, we met this fellow. He looked like a field mouse fresh off the farm and in the city for the first time. It kept moving along the sidewalk until it disappeared into an access hole into the innards of the overpass. Sadly, this was the high-point of our walk.

The second, and only other high point was finding two balls.

Obviously, two dog balls, but neither with identifiable homes. Boring.

This morning was relatively warm at 57°F (14°C) but raining, not uncomfortable. We found no money and no roadkill.

Someone left a sweatshirt/hoodie at a bus stop. 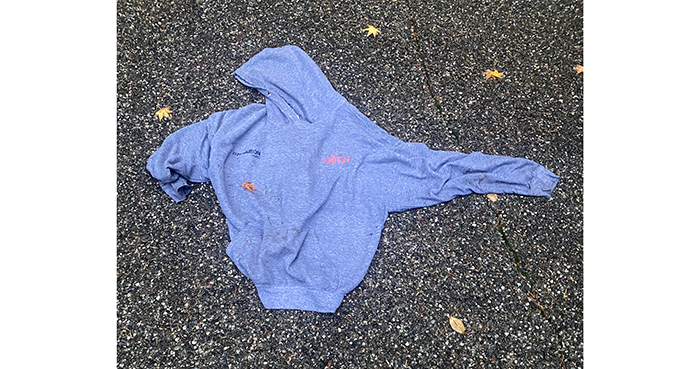 It was monogramed Ferguson HVAC on one side and Fujitsu on the other. It was big, waterlogged, and heavy. We hauled it home and will add it to our Goodwill basket.

We have sunk so low. 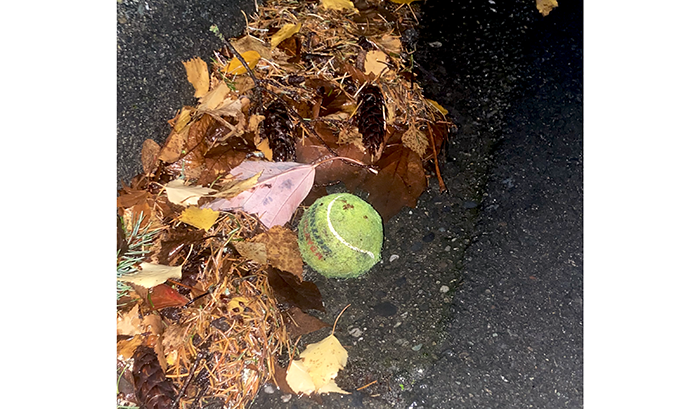 Yes, yet another picture of a lost dog ball.

We picked up a very nice role of duct tape. 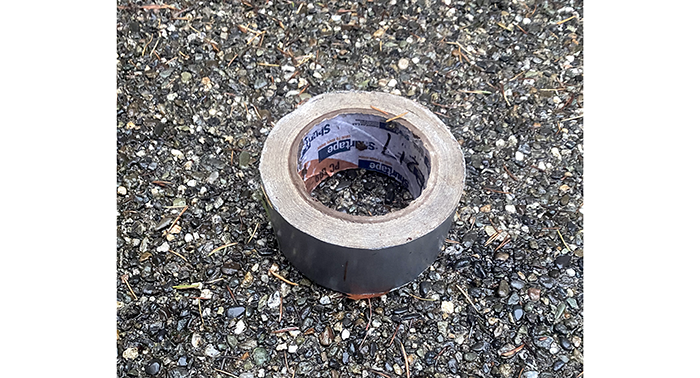 It was not runover at all. We’ve used duct tape to fix anything but ducts. Warning: diversion ahead.

So, what is the history of duct tape? No, it was not invented by MacGyver. It was invented by a woman named Vesta Stoudt.

Vesta was a mother with two sons serving in the Navy during WWII. She worked in an ordinance factory and noticed how the paper tape used to seal the ammo boxes was a weak point. She suggested cloth-based tape to her management and got little support. She then wrote a letter to President Roosevelt who was impressed and passed the letter to the War Production Board who contacted Johnson & Johnson to develop the tape. Try getting that kind of response from a president in the last fifty years.

And, who knew? “Duct Tape” was initially named “Duck Tape” because it was originally made from duck cloth. Yes, we are here to educate. Expect a pop quiz next week.

We are slacking this week. Our grandkids spent the night at our house and needed to get back to Seattle by 9:00 am, so we did not walk. So, we end our third week in a row without finding any money. Since we have been keeping  detailed track of our weekly money finds since June of 2019, we have only had one other time we had three profitless weeks in a row. That was during a large snowstorm and in its aftermath that we didn’t walk. Maybe we should start accepting credit cards.

Our trusty flashlights have been starting to fail. We purchased them in October of 2015, so they are getting a bit long in the tooth. We got new ones this week and the new and improved ones are much brighter which translates into battery life.

The one on the left is the new flashlight compared to the old one. The old ones would run for about three hours on one battery charge. The new ones last about two hours, at high power. Of course, the batteries are now three years old, so perhaps new batteries would help.