This morning was slightly warmer than Saturday at 39°F (4°C). It made for a much nicer walk, but for some reason we had a hard time getting started.  We forgot to get the camera from the charger and had problems getting our cold weather gear on in order. Then we forgot our flashlights inside the house after setting the alarm. Finally, Chuck had his rain jacket hood up and forgot his hat. This all put us about ten minutes behind schedule. Well, yes, of course we have a schedule. Trash waits for no man. 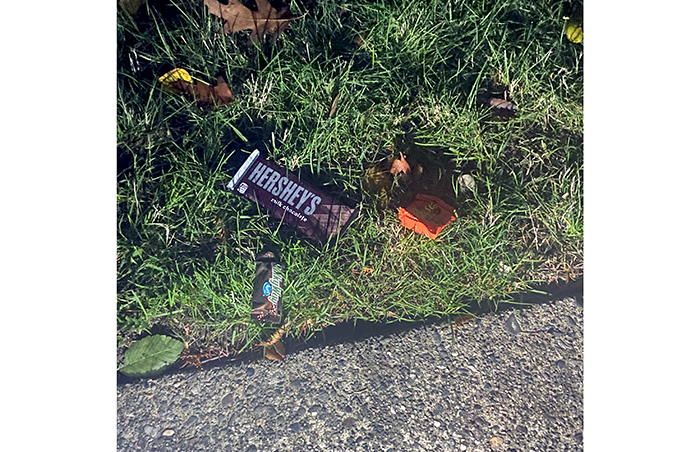 We expected a lot more random candy wrappers after Halloween and we found our share. We also found some unopened candy probably dropped by a trick-or-treater. A Milky Way, a Reese’s Pieces and a Hershey’s Bar. It was tempting, but we stayed on the side of caution and tossed them.

It was in good condition. Chuck tried it on, but passersby quit waving back, so he removed it.  It went into his garbage bag.

While we were out running errands, we saw a large black bag in the ditch along 112th Ave NE.

We retrieved it with the car and decided not to deal with it on Sunday. When we opened it up today, it was a lot of plastic water bottles, Pepsi cans, Modelo beer bottles and other random trash.

Here is a tip for you litterers. When you toss out a bunch of trash, make sure you do not leave addressed items in it. 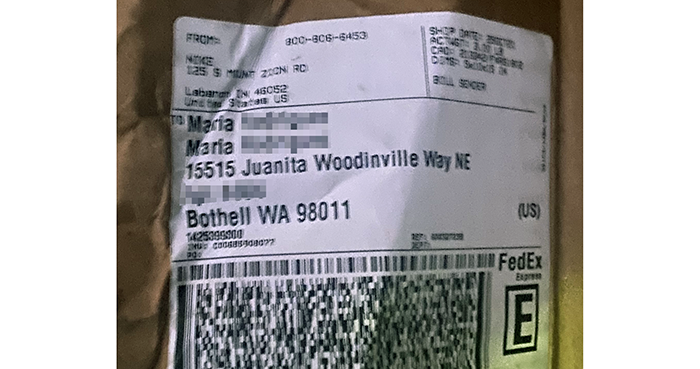 It took a while with Google Maps, but we were able to track the person down. The package was from Nike. Hope she enjoyed the shoes while dumping the bag in the ditch.

We both got our COVID booster shot yesterday, and we were not feeling our best this morning. Also, we’re getting our irrigation system winterized early today so we needed to keep our pace up. We picked up the regular amount of trash, but nothing of interest, so no pictures, no money, and no roadkill.

If you read the blog a few weeks ago, “Things that Go Screech in the Dark,” we heard a couple of animal sounds that we did not recognize.

Now we think it was probably a bobcat.

But we are still guessing.

Here we are midway through our walking week and the pickings are dismal. No money and no roadkill.

Every week, four to seven beer cans have been tossed in the bushes. We shouldn’t be too hard on the guy. He probably suffers from Hodophobia. It’s a good thing he does not suffer from dipsophobia. He would never get to work.

The only out-of-the ordinary thing we found was an ordinary CB antenna.

“Hey, good buddy, we have a bear trap near the flying hook, copy? Copy? Good buddy, are you there?”

Translation: “Hello fellow trucker, I just passed a police speed trap near the Flying J truck stop. Understand? Wait, what the hey happened to my antenna?”

We are here to help.

Continuing our boring week with the normal amount of trash and no money and no roadkill. We have had no rain on our walks this week until today, and even then, it was mostly a light mist.

The radar map on the left shows the rain pattern as we arrived home. The map on the right was a half hour later when it was pouring outside. We need to keep giving sacrifices to the Rain Gods. What? No, not children like the Aztecs. We sacrifice rabbits. And only roadkill rabbits.

Someone did not have a good night.

A decapitated road sign. Whoever hit it fared far worse. The tire marks indicate it went over four curbs to score this sign. We are guessing bent wheel rims at the least, and possibly suspension damage.

Well, not really. Only a bungee cord and totally destroyed. We can’t get a break. Actually, with this one we could get a break. It got put in the trash.

Finally, we sent a notification to the John L. Scott Realty, a local realty company since 1931 about an open house sign hanging on a fence for a while.

No, we don’t think it has been there since 1931. The fence hasn’t even been there that long, but at least since August. We filled out a request form on their website to have it removed and got an immediate enthusiastic automated reply that one of their agents would respond quickly. Okay, it’s been ten hours and counting. If we wanted to sell our house, they would probably have interrupted our breakfast. We will let you know what happens.

Today, rain was predicted so we wore our rain jackets. It started out light and got heavier, but the temperature was in the upper forties and comfortable. But again, we found no money and no roadkill.

We are so glad the elections are finally over because most of the political signage will disappear. We were amused by these two.

Rod, the “I’m an organized professional politician” with the standard political sign against Sally the “My signs are completely recycled plywood and tree limbs for zero waste.” No doubt, the “paint” used on her signs are made from grapes and strawberries. Recycled, of course. In the end, Rod won.

People left us a couple of gifts this morning. 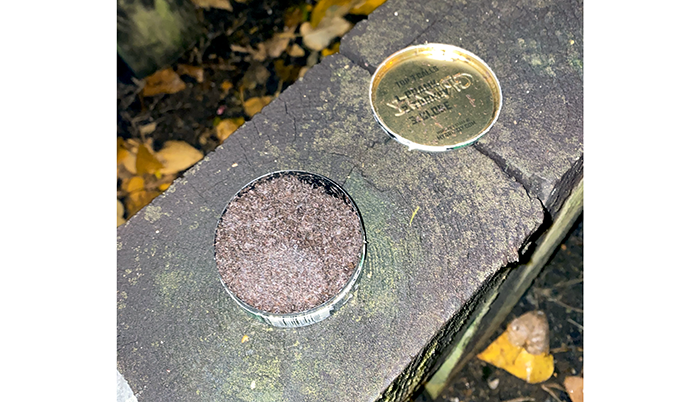 The first thing was a full can of Grizzly Smokeless Tobacco. Okay, we don’t smoke but, this was a gift. We need to give snuff a try it, right? Well, no we don’t think so.

Also, someone left us an unopened candy bar. 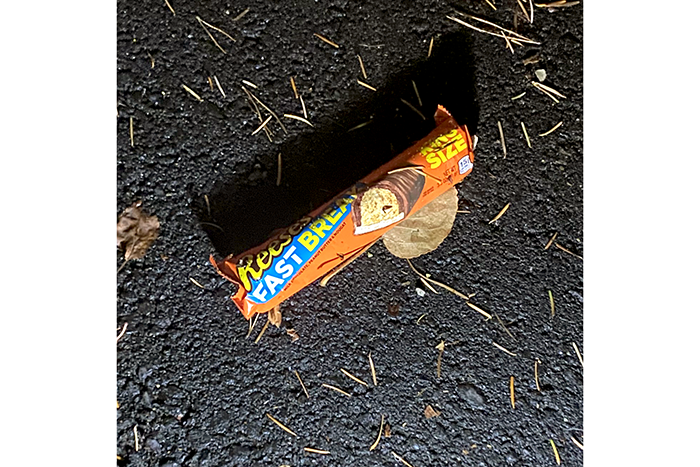 Reese’s Fast Break, king size. Thanks, but haven’t even had breakfast yet.

But it wasn’t a missing cat it was a missing pony named Pinkie Pie. Pinkie Pie is a character on the animated series, “My Little Pony.” No, we don’t know why she is missing. With cats, it is normally coyotes. In this case, though it is more apt to be a young stallion.

We reached the end of another walk week. We removed a roadkill crow and found no money. This makes the second week in a row without finding any money. We may need to refinance the house.

The temperature today was cooler, and we got some off-and-on light rain, but nothing major. At the Sammamish River Park, we found a large broken mirror that someone dumped in the bushes.

“Write off. Take to back of warehouse. Written off!” Perhaps “back of warehouse” is their code word for “dump in the bushes?” We carried it across the parking lot and placed it in the garbage can.

Also at the parking lot there was only one car. 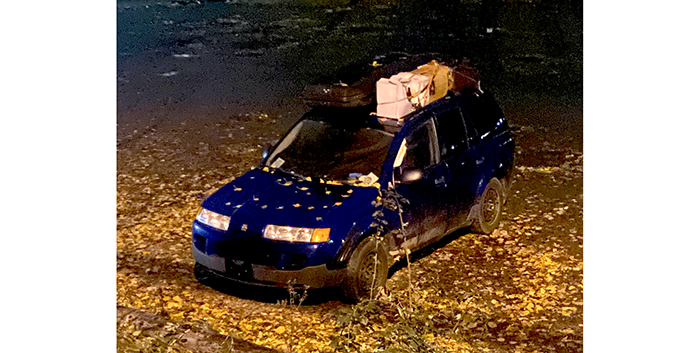 There was some trash in front of it and a bottle and a can just under the driver-side door. We picked up the trash and as we were pulling the bottle and can from under the car, we heard some movement inside.  As we suspected, someone spent the night in the parking lot. We went about our business and later in the day, when we passed the lot while running an errand, the car was gone.

Someone lost/tossed a full bottle of hand lotion.

It was a 1-liter size and heavy, so we got rid of it in the nearest dumpster. Later we found it was forty-six dollars on Amazon, so perhaps we should have taken it home. However, we did try it out and it made no discernable difference on the rubber gloves we wear. So, we don’t feel that bad.

We found a scissor on Riverside Drive.

We didn’t run with it, but since it wasn’t a pair of scissors, we felt comfortable walking fast.

At the access to the Sammamish River on Woodinville Drive, a dumped pile of rubble.

It was a mixture of plaster and sheetrock. Someone performed some work, charged the customer for hauling the refuge to the dump and dropped it here to save money. We’d love to have his contact information. We want to give him some reviews on Google, Yelp, and Nextdoor. Let us know.

We found a pair of feet today. It was unsettling. 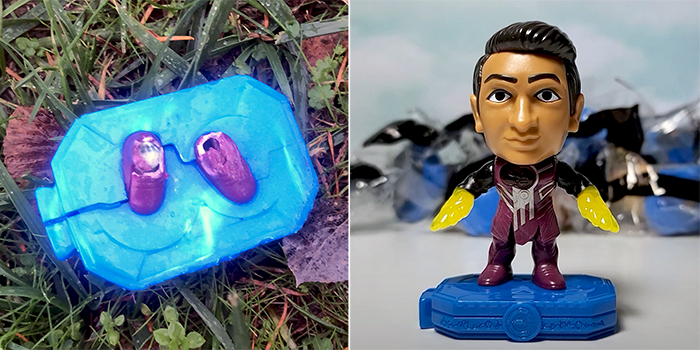 They turned out to be part of a McDonalds giveaway toy, Marvel’s Kingo. According to this site, “Kingo is an Eternal possessing superhuman strength, durability, speed, agility, stamina, reflexes and healing numerous times…” Okay, Kingo, heal thyself. We just checked, still just feet.

We wave to the bus drivers we meet and most of them wave back. Some even honk and wave to us. Today, Chuck waved to a bus driver on Brickyard Road, and it stopped. 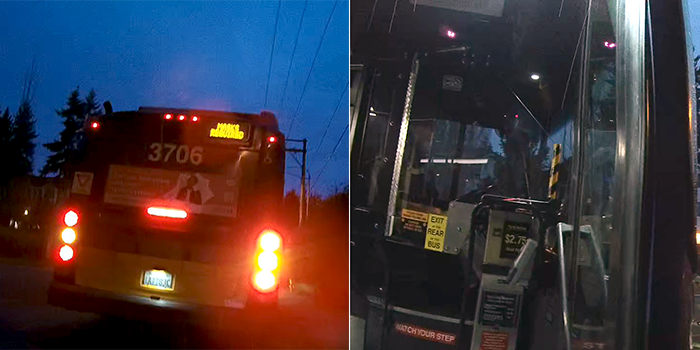 Chuck hurried up to the open door and said we were just waving to him and apologized for stopping the bus. The bus driver laughed and said when he sees someone wave, they want a ride. Chuck told him to just ignore us.  Yes, we periodically need to break in new drivers.

We found the metal backing of a disc brake pad with the pad completely worn away.

So, no brakes on this wheel. Worse yet, this was on the freeway onramp. Hope it wasn’t rush hour.

Also on the onramp, we found a bucket that someone lost off their vehicle.

We picked it up to haul home. Then we found a bungee cord in good condition. 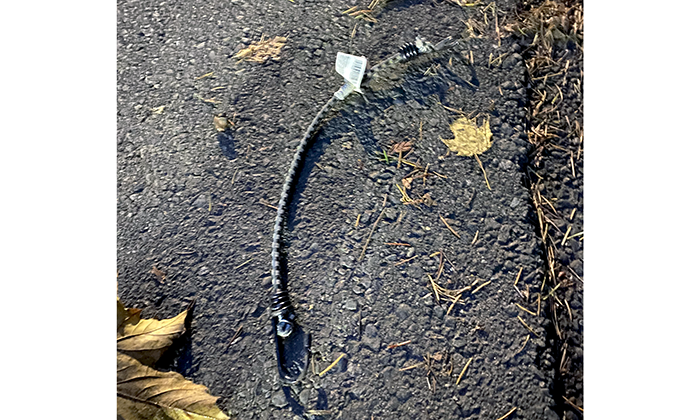 It did not seem to be run over at all. We tossed it in the bucket. As we were nearing the end of our walk, we found a large piece of plastic, part of a vehicle.

Using a utility knife that we carry, we cut the plastic up into smaller pieces, then used the bungee cord to bundle the pieces together and placed it in the bucket to carry home.

We love it when a plan comes together.