The first walking day of the week was very rainy.

Even the ducks were heading for higher ground up the Tolt Pipeline Trail.

We found two pennies today, a nice way to start out the week.

One penny got tossed out with some litter. It was a tip for us for cleaning up after the culprit.

This guy learned to put his cigarette butts into a cup instead of tossing them out the window.

It does save us from picking up a bunch of scattered butts, but his next step is to learn to place the butt-cup in a proper receptacle.

On our way up Norway Hill, it looks like someone is planning to lay siege to the house up the bank. 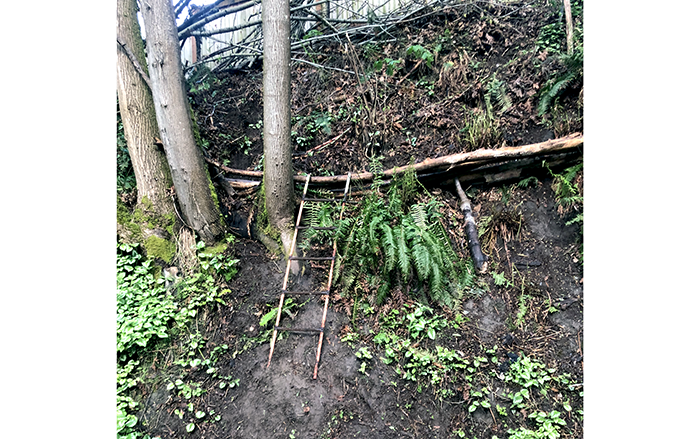 If they just go one street over, they could ring the doorbell.

On the way down the hill, we have been seeing signs of someone doing some ground-leveling work.

Today there was a small picnic table sitting about ten feet below the road level. This is not a good idea. We imagine a family having a nice picnic in the woods with beer cans and bottles being tossed over the bank from passing litterers.

As we started our walk this morning, we found two boxes that looked to be stolen packages.

We didn’t want to deal with them here, so we took it back around the corner to our house and left them in the driveway.

When we finished our walk, we checked them out. The boxes were wet from the rain and had become unsealed.

They contained three very large gowns. The size on the tag was 104.86.112 which, if these are centimeters, are 41, 34 and 44 inches. Looks about right. They were all sent from “Ray” at a fictitious address in Regina, Kentucky to “Tony G.” at a post office box in Woodinville. So, they were obviously not stolen, just dumped. We dropped them at the post office and let them figure it out.

There was a little rain today, but not like yesterday. It was an uneventful walk with little of interest. No money and no roadkill. In fact, Chuck was so bored that he stopped to smell the roses, so to speak.

He took a picture of these plants and used a plant identification app to identify them. Stinging Nettles. It’s a good thing he didn’t try to smell these.

Janet was ahead of Chuck going over the hill and he found this.

A dropped Kleenex, so he knew she had come this way.

It looked like a penny but turned out to be a dime. Chuck put his bags down and knelt to take a photo.

Chuck didn’t notice it, but a black pickup truck passed by in the opposite direction. 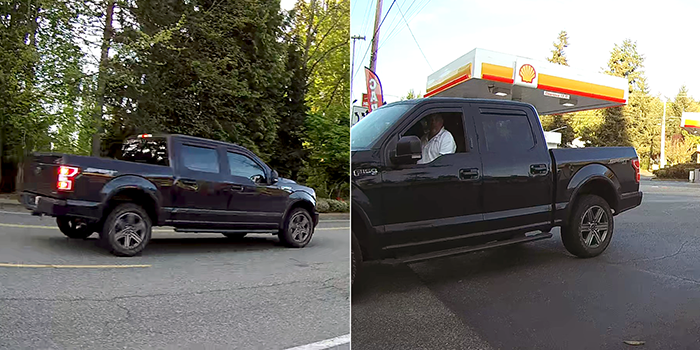 When the truck passed, the driver saw Chuck kneeling down in his rear-view mirror and thought Chuck had fallen. He circled back through a parking lot to check. We assured him that Chuck was fine and thanked him for stopping. We feel very safe out there with all the folks we meet.

We also found another lug nut.

We took a photo and picked it up without incident. Or drama.

We’ve heard the term “Belts and Braces.” It is the British version of “Belts and Suspenders.” It means planning for a backup safety net and this is why.

Yes, we did pick up the cigarette butts also. The jingle of pennies is fine, but we really prefer the sound of crisp twenty-dollar bills. Okay, we’ll accept soggy ones too.

Then this at the park-and-ride bus stop. 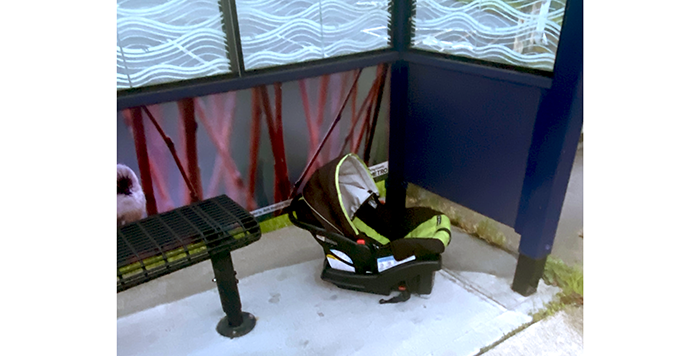 Sally: “I am not sure about using public transit for our trip to Spain. The timing, the luggage, it seems so complicated.” Jim: “You worry too much, we’ll be fine.” Sally: “How’s the baby holding out?” Jim: “Uh…”

It appears to be a kitchen apron with no logo. It reeks with “I’m done with this place. I can get a better job at McDonalds and I get a logo!” Just our guess.

Another bottle for us.

As we keep grooming this section of the road, there is plenty of new trash, but old trash keeps resurfacing. Today, an unopened beverage bottle. We have no idea how old it is or even what it is. We will save it as a prize for one of our future contests. Stay tuned.

Yet another lock not doing it’s job.

Rant #1: At the intersection of NE 160th Street and 124th Ave NE, some construction occurred and a bag full of rocks used to weigh down a construction sign was abandoned in the grass. We pulled it onto the sidewalk to see if anybody would do something about it.

Rant #2: The Bothell City mowers came by and mowed the weeds. The bag was gone! Then we noticed that it had been tossed into the bushes. We are not sure, but it appears to have been moved by the mower. If so, do the right thing and retrieve it.

The bag had been ripped so we emptied it and recycled the bag.

Today was cooler and dry. We found no money and removed a roadkill rabbit from the street.

We did find a football hat.

Okay, it might be a ruptured football, but it could work as a hat.

We hadn’t found any tools so far this week, but today we had a brush with success.

It was unopened and unrunover, too!

Then there was this.

The only thing we know about this is that it belongs to Anamara. It could be padding for a bra, but it is only about two and a quarter inches in diameter. Okay, perhaps a training bra.

It’s Friday and time to check out Chuck’s vest pocket.

Two more hair bands and three reflectors that are not very reflective. A small wooden yield sign. A lock-down screw which, evidently, couldn’t even lock itself down. An Orca bus pass. We tried to find out the value on the pass, but the website is down. Yeah, and the busses are probably running late too. Finally, a security badge with no picture or identifying marks except for the card manufacturer. Not much chance of finding an owner.

Our last, and longest walk of our walking week started warmer and dry with about an hour of moderate rain in the middle. We removed a small bird and a rabbit from the road but found more money.

Two more pennies. Okay, only two cents, but we’re happy to take it.

On our way down the hill to Riverside Drive, we found a t-shirt.

A McDonalds Menu Hacks employee t-shirt, large size. We won’t speculate on why the employee dumped the shirt. After some research, we found that it is available for $13 on eBay. However, it describes it as “2022 McDonald’s Menu Hacks Authentic Crew Shirt Rare.” Rare, really? How many employees does McDonalds have in 2022? And we just happened to find one?

We are finding a lot of discarded face masks these days, including this one. 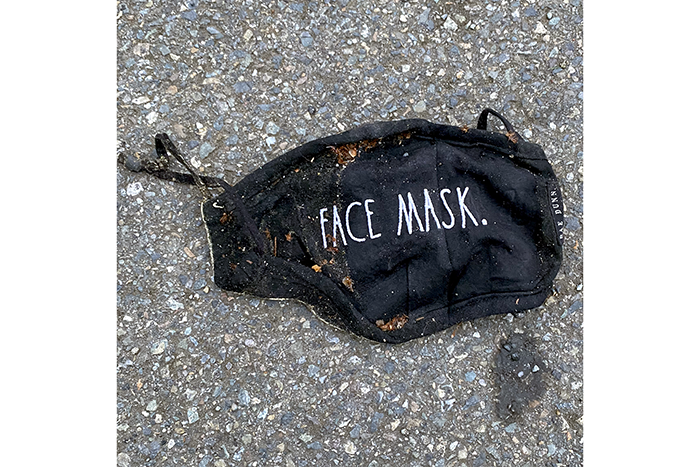 Right. After two plus years of pandemic, you need to tell us what it is?

It was from a group called Oceana asking Amazon to use less plastic and urging a vote “Yes” on Item 8 at the Amazon General Shareholders Meeting. Of course, we looked it up and the details are here, page 41. Some shareholders are asking for Amazon to provide information about how much plastic it uses and how it could reduce it to the recommended level. If you are interested in the details, check the website.

One of the places we pick up trash on Saturdays is a parking lot near an establishment we frequent, the Hop and Hound. There is a favored parking place that we consider ours, though most of the time it is already occupied. This morning it was occupied.

Four Lime scooters. Our urge was to kick them over, but we moved them to one of the no parking zones in the lot. We hope they get illegal parking tickets.

We did find more tools today.

A socket that had been buried for a while and looked little worse for wear and an unscathed long drill bit near the freeway offramp. Hey, when we find these tools, we know the drill.

We found another fork.

This mess was in the back of a truck parked on Woodinville Drive. It looks like a litter super spreader to us.

Under the freeway was a McLitterer’s mess!

We have not found one of these since August of last year. We have found over sixty of these over the years and they always contain the same thing: two clean platters, a small bag with two syrups and four to six butters and two sets of utensils all unopened. They also have two used tea bags. However, they did select a large paper bag instead of the plastic bag they normally use. Probably out of concern for the environment.

We may need to find a spot for this in our trash museum. 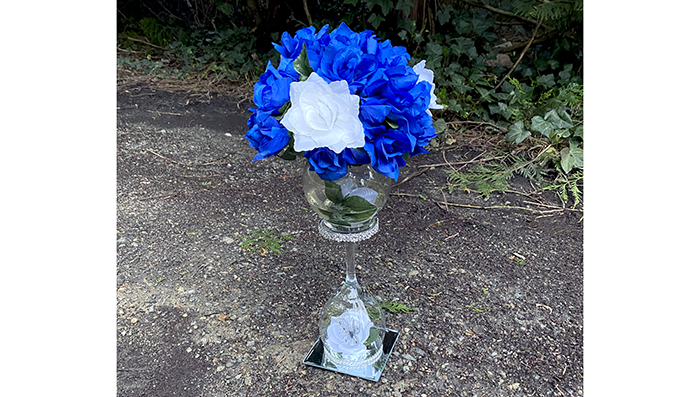 It was in the bushes in front of our favorite trailer park and was amazingly unbroken. It looked to be a homemade masterpiece that someone didn’t appreciate. Art imitates trash, they say.

We found some food.

A baggie containing a breakfast roll, an energy bar and a bag of Motts mixed dried fruit. As we approached, a crow flew away that had torn a hole in the bag and consumed part of the roll. We looked around for the crow, but it had flown the coop, so to speak. We would have left the roll for it.

We also found a bag from Panda Express with two partially-eaten noodle dishes and four unopened fortune cookies. We divided the cookies between us and checked our two fortunes, and no, did not eat them. Janet’s are on the left and Chuck’s are on the right.

Why does Janet get specific promises for doing nothing while Chuck needs to be patient, understanding and honest for an unspecified future reward?

With that thought, we wrap up our work week.