This week started with a temperature of 40°F (4.4°C), 11°F warmer than last week. Still cold, but much better. We didn’t find any money and removed a roadkill rabbit, well tenderized by the passing traffic.

Someone lost a combination backpack-cooler-chair. It is thirty-two bucks on Amazon, but this one looks to be a company give-away. 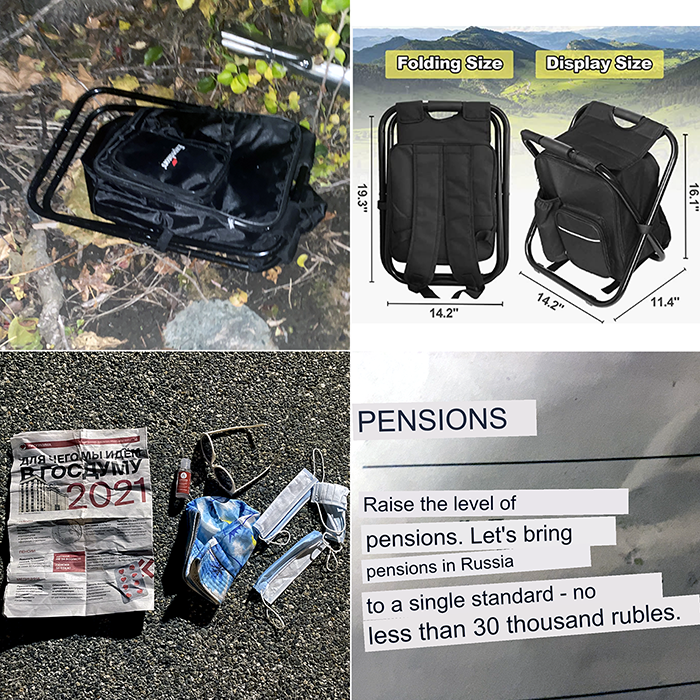 Inside was a small bottle of hand sanitizer, sunglasses, some masks, a hat, and a Russian political flyer. The headline reads “Why we go to the State Duma.” The State Duma is a Russian federal assembly, and this paper is a flyer from the “Pension Party”. It sounds like the AARP. The photo on the bottom right is a Google translation of one of the paragraphs. Thirty thousand rubles is about five hundred dollars. This flyer is from 2021. We assume they now have a better reason to go to the State Duma.

It’s been a bad couple of weeks for downed planes.

And we found another today.

More folks warming up with the weather at the top of the Tolt Pipeline Trail.

We picked up a lost and run over children’s book, “Three Bears of the Pacific Northwest.”

The copy on Amazon reads, “Based on the best-selling children’s picture book, this story follows two bears on a journey to help a little blue bear find his way home in this board book adaption of Three Bears of the Pacific Northwest. This is a charming story with a happy ending and no Goldilocks home invasions and porridge-stealing episodes.” Okay, we may have added that last part.

It was even warmer today at 48 °F (9°C), but it was raining most of the walk and we both got soaked. We both prefer being warm and wet to cold and dry. No roadkill, but we did pick up some bread today.

No, real bread. We did not find any bread as in moolah.

We did find an adapter.

This is a U-Haul trailer light adapter worth fifteen bucks. It was still useable, but we can’t count it as money

We found another Toyota wheel cover near the freeway onramp. 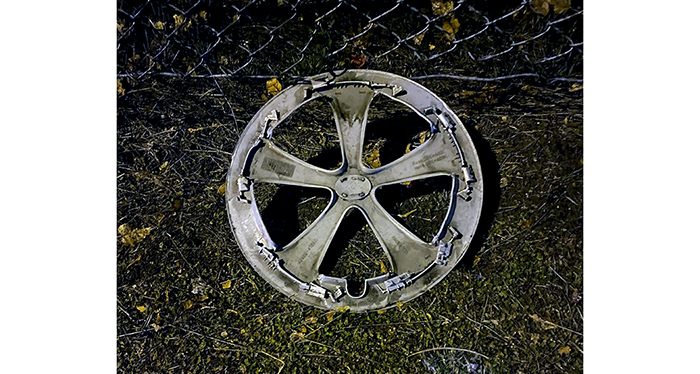 We were close to the Chevron station and left it in their recycle bin.

About a half block from the station, we found a big box.

A Hopelink donation box. Not only did someone not donate, they stole the box of donations and littered the box. They reached a new low. Well, at least they didn’t defecate in the box like last week. We picked up the box and walked it back to the Chevron station.

Whoa, the couple on Norway Hill are really warming up.

And what is with the leaf? Some Adam and Eve role playing?

The day before Thanksgiving was mild with no rain. Also, no roadkill and no money. Yep, we should have stayed in bed. There was a lot of random trash, but nothing to write home about or write about in the blog.

We were accosted by a small dog.

It was bravely guarding a vulnerability in his owner’s home defenses which it probably dug himself. About the time we decided we could take him, and breach is defenses, a walker caught up with us.

The walker introduced himself as Matthew and wanted to shake our hands and thank us for what we do. 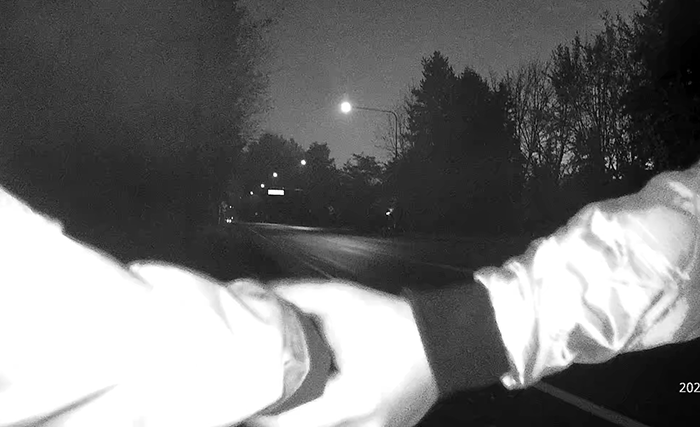 We warned him we were wearing our rubber gloves and shaking might not be a good idea, but he insisted. We briefly discussed littering and the state of the world and agreed on every point we discussed. He would have been a good ally, but we continued on our way. The dog was lucky. We could have taken him.

The couple at the top of the Tolt Pipeline did not appear to continue their momentum.

Happy Thanksgiving! The morning was cool and clear with very little traffic, but several of the cars were very vocal. We got several beeps, two shave-and-a-haircut honks, three vocal “Happy Thanksgivings.” We even had two buses honk, and one slowed down and waved.

However, no money again but removed two road kills of the freeway ramps.

One rat and the other was our first ever bobcat. We’ve seen several coyotes and one or two bobcats on our walks, but this is the first mammal predator we have found.

We found this at the park-and-ride. 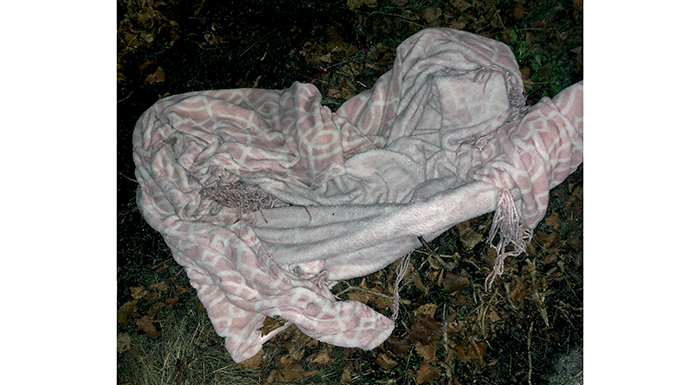 It threw a wet blanket on our walk.

We found some mail under some bushes by some apartments.

We walked into the apartment parking lot and found where the overflow was coming from. This is the biggest dump of stolen mail we have found. It was firmly on the apartment’s property, so we decided to let them worry about it.

So back to the amorous couple at the top of the Tolt Pipeline Trail. “Honey, I’m getting bored with our relationship. Every night it’s the same thing: Dinner at McDonalds and parking at the top of the pipeline.” “Babe, I understand, and I have something special planned for tonight.”

We found this at the bottom of the Tolt Pipeline Trail.

In the same vein, at the street paralleling the freeway offramp, someone got lucky with a loaf of Dave’s Killer organic bread.

You gotta admit it has a little more class than McDonalds. On the other hand, it was about one hundred feet from the continuation of the Tolt Pipeline Trail across the freeway.

For clarification here is a Google map of the local Tolt Pipeline Trail.

A large, partially eaten turkey drumstick, a bag of random trash and an empty 12-pack of Leinenkugel’s Original Beer. Next to the litter was the biggest urine water bottle we have found. But then again, it was an empty 12-pack.

Every election that comes around, tons of political signs are planted at every intersection to fall over or be pulled out by the opposing party. When the election is over, most of the candidates collect their signs, but like campaign promises, the locations of the signs are often forgotten.

Today was warmer and it started raining about the half-way point, but not bad. We didn’t come across any roadkill, which is a good thing, and we also found some money which a very good thing.

Twenty-six cents, but Janet is concerned that we are giving too many hints to where we find our money, so we will start obfuscating the name of the actual place by calling it the Duke of Queensberry known for boxing rules and perhaps franchising dairy product shops.

So, a while back, the Washington Legislature passed a law, and it was approved by Governor Inslee to ban all light-weight plastic shopping bags and allow only reusable heavy-weight shopping bags to reduce the amount of plastic waste. As a result, we are finding heavy-duty bags like this one.

We are finding about the same number of littered bags as before, but they are now thicker, but of course they are only a small fraction of the littered bags. Some stores are now charging for bags, but it is lost in the cost of the merchandise. So, the net result is there is more plastic being littered. Too many well-meaning laws are not well thought through.

Okay, off the soap box, we came upon a very organized neighborhood.

They have their act together. Well, except for the guy on the left. Come on, get with the program.

But not like yesterday. This guy is a lightweight. 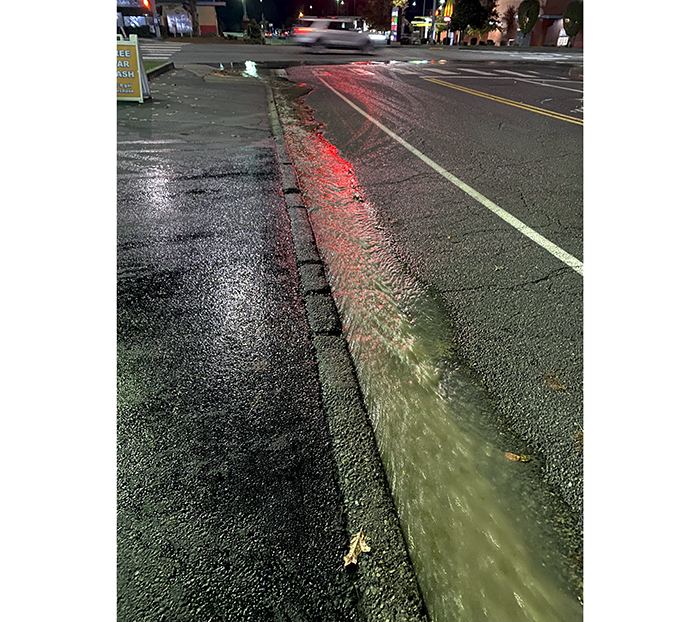 This was before the rain started and was a significant drainage. We cleared the storm drain as best we could and went on our way. We have the Bothell Police nonemergency number in our phone, but not Kirkland. An oversight. Maybe next time.

A box of 50. Someone playing amateur, dentist?

First, everything has a pink tinge to it due to the broken compact last week. We need to wash the vest.

Starting at the upper left, a small plastic vial. We found one of these once before but couldn’t pin down what it was for. Still a mystery. Below that is a piece of plastic that we thought was from a piece of jewelry, but on closer inspection, it appears to be a broken Christmas light, white not pink.

On the upper right a dense foam ball. It’s not much fun. It doesn’t bounce very well. Below that, part of Melissa’s credit card. She might have cut this up on purpose. Wonder if she’d missed the chip if the card would be useable?

Then there looks to be someone’s Thanksgiving shopping list:

Today’s walk was cool with no rain which suited us fine. And we found more money in the Bothell parking lot.

We were walking across the lot, and we stopped on this. Yep, a dime. We would prefer a twenty-dollar bill but stopping on a Jackson doesn’t have the same ring to it. And soon, it will be stopping on a Tubman.

Still not the same.

Great, we picked this litter up.

Official debris from the City of Bothell. Really? We need to pay more attention to our elections.

Sometime last week, we saw a Comcast Xfinity truck working on some cable lines. Today we saw this, a piece of equipment left by Comcast.

We found a tool.

Sort of. An Eddie Bauer headband light. It was DOA, but when it dried out and the batteries replaced, it lit up. It’s OK, but runs on three AAA batteries, our least favorite. As some of you know, we favor the 18650 Li-Ion batteries, though they may be heavier, they last and are rechargeable. This one is headed for Goodwill.

We did pick up some clothing.

Well, one shoe in good condition and not of much use, and a pair of nice gloves that someone lost on the freeway onramp that cleaned up well and not headed for Goodwill.

And we almost scored yet another pair of scissors.

Finally, on Riverside Drive, a car took out three of seven mailboxes with only a mirror.

We are guessing the loss of the mirror, laying on the ground on the right, and collateral damage is much more expensive than fixing the mailboxes. At least we hope so.

That’s it for the week. Our take.

Have a great week and remember to keep an eye out for a Tubman.