We had a delivery scheduled for 7:00am this morning, so we decided to leave the house early and do the shorter, five-mile Park and Ride route instead of our normal Safeway route.  We left the house about 5:10 am and got back at 6:50 am.

We waved to Salinas Construction and got a shave-and-a-haircut honk from MM Mechanical.  We found part of a car bumper and stashed it behind a construction barrel.  We will pick it up later with the car.  I flung a squirrel and Janet flung a rabbit.  Her technique could use some work.

Over the weekend, we spotted a picnic cooler someone left at the bottom of the Tolt Pipeline.

We discussed what could be in it.  This spot has a history with us of people leaving dead animals in plastic bags.  This morning we opened it and it was empty, fortunately.  We will also collect it with the car.

As we approached the Willina Ranch Apartments near the freeway, an EMT and three Bothell Police cruisers came off the freeway and down into the apartments.

It’s unknown what the issue was.  We came upon roll-over on Norway Hill, though. 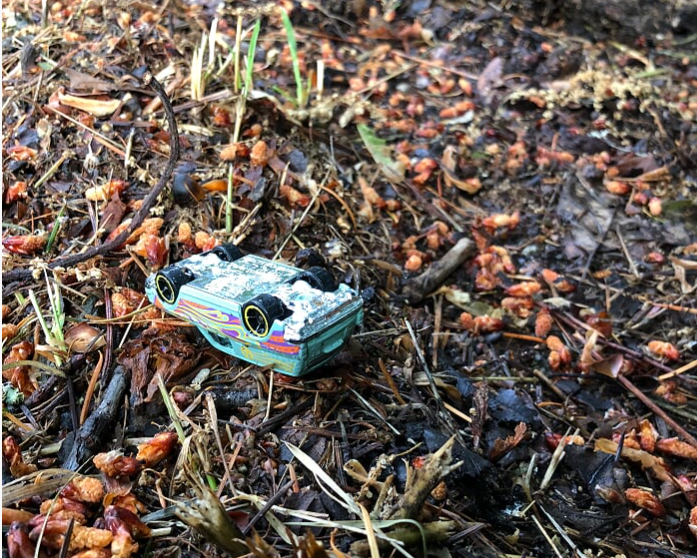 It was difficult to tell how many times it may have flipped.

At the Hop and Hound last evening, we saw Steve and Vanessa, friends who also live on Norway Hill.  Steve, a dentist, has offered to give us some gloves.  This morning, because of our early schedule, he saw us on our way home and asked if he could leave them at our house.

When we got home, we found four boxes of gloves on our porch, two smalls and two mediums.  Thank you, Steve and Vanessa!  Then, one of our neighbors gave us a box of gloves that an uncle who recently passed away had. We now have about 1200 gloves, using 24 in a typical week, so we are set for a year.

Today’s walk was slow.  We got a honk from Mr. Handyman and a wave from a Costco truck driver.   We didn’t come across anything to fling this morning.  On Juanita-Woodinville Way, someone dumped a bunch of stolen mail, mostly junk mail.

We sorted through it and took the real mail to the post office.

We found an ace of spades.

It turned out to be an auto air freshener.  We have found lots of the tree-shaped fresheners, but this one is the first ace.

This put a whole new light on things.

Not really.  This flashlight works but uses 3 AAA batteries which probably last about 10 minutes, so it’s useless for us.  The flashlights we carry use one, 3.7 Volt  Panasonic 18650 Li-ion battery rated at 3400 mAh.  These batteries are used in Tesla battery packs.

At first, we used cheap Ultrafire 18650 batteries rated at 5000 mAh.  They barely lasted through our walk when the flashlight was used mostly in dim mode and became very dim by the end.  These are fake batteries from china and some even have smaller batteries inside.

Doing some research on the web, I found the maximum capacity for 18650 batteries is about 3800 mAh.  The Panasonic batteries last our full walk of 2 to 2.5 hours with the flashlight in bright mode.

Finally, as we were heading up Norway Hill a gentleman accosted us.

He told Janet he sometimes walks up the hill picking up trash.  Janet told him we will leave some scraps for him.

We took a quick trip to Eugene Oregon to visit our 93-year-old aunt.  We also had dinner and a nice visit with our favorite cousins, Jerry and Dana.  Good people.

It was raining today when we left the house, so we suited up in our rain coats for the first time in a while.  The walk went quick until I saw a piece of paper on the traffic island near the freeway.  I crossed over and picked it up and found a bunch of cigarette butts.  While I was picking them up, Janet continued to the bus stop and met me on her way back.

We continued down Juanita-Woodinville Way toward the 7-11.  Janet was ahead of me on her side of the road when I saw a couple of crows feasting on some roadkill on Janet’s side of the road that she “didn’t see”, so I flung it.  I’m not sure what it was, but there is a 78.6% probability it was a rabbit.

I saw Michelle again. Her move has been pushed back to the end of this month.  She had picked up a McDonalds cup, so I thanked her for picking it up and put it in my recycle.

There is a certain location on Norway Hill where the litterers like to throw beer cans, probably because it is fairly open but out of sight of houses.  Today, I went down the 45-degree bank and collected 5 Busch Light beer cans while Janet directed from above.  She pointed out a plastic bottle and when I retrieved it, I found three more.

Why go through the trouble of filling a plastic bottle with water and putting your butts in it, only to throw it out the window?  Cigarette butts and plastic bottles are the two most common litter items in the world.  This guy gets a twofer.

Today was a cool, clear morning and we had a nice walk.  Traffic was Friday-light, and the trash was moderate.  We found a bristle and another socket to add to my growing “found” tool collection.

We got a couple of honks and waves from bus drivers and we got verbal thanks from a jogger and the driver of a truck at the 7-11.

Along with cigarette debris, we are finding more and more e-cig and vaping litter.

We came across some major litter. It looks like it was put there on purpose, but I don’t see why.  Something for the city to handle.  Also found a fresh Busch Light on the hill. 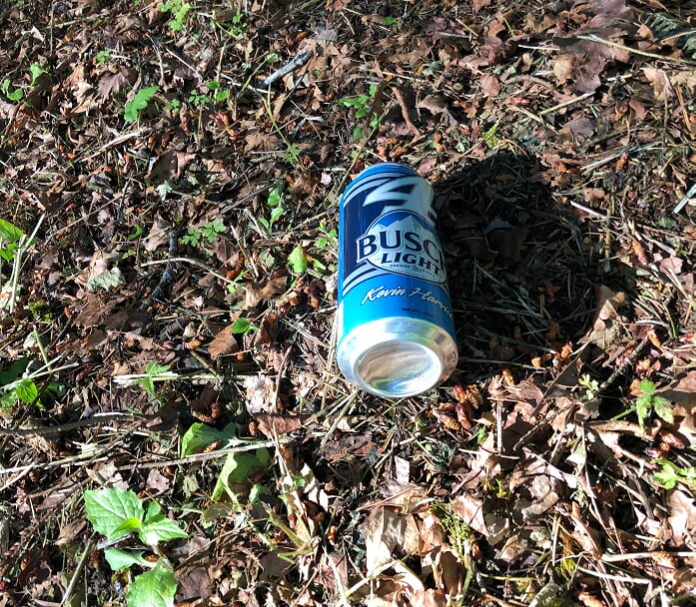 Another habitual litterer. These Lime Bikes are at the top of the Tolt Pipeline. 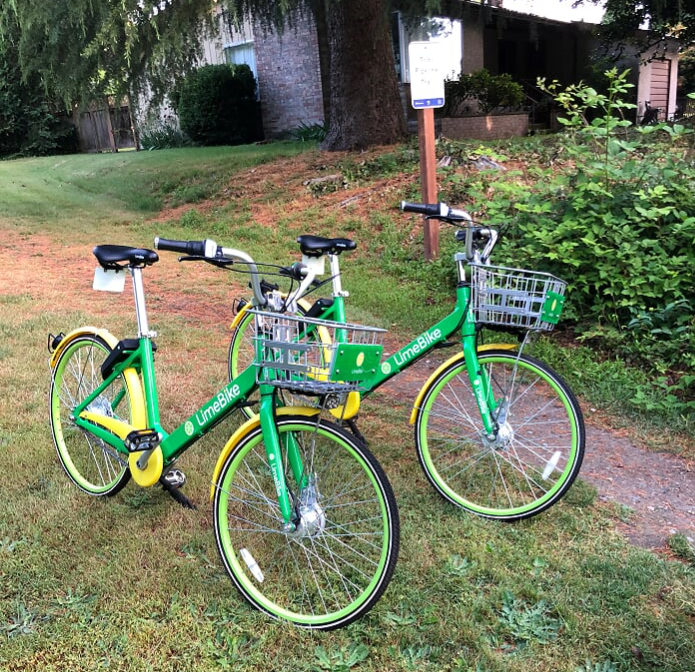 These are the first ones we have seen on this side of Norway Hill.  We found irrefutable proof that China is smuggling guns into the US.

Finally, as we approached our home, a lady stopped and asked Janet if she could help by taking one of her bags.

Well, she didn’t ask ME!

Another nice day for a walk.  There were a lot of bicycle riders on Riverside Drive with lots of waves and thanks.  On the way up the hill from Riverside Drive, a man stopped and said he sees us every Saturday when he gets his haircut. He thanked us.  A lady on 112th Ave slowed down and yelled thanks out her window.

We flung two ducks near the Bothell bridge across from the Sammamish River Park, one flattened in the middle of the road and the other near the guard rail.  There is no duck crosswalk there.

Bothell mowed the last stretch of road on our normal walking routes and uncovered a trove of cans, bottles and other miscellaneous trash, some whole and some shredded.  Between that, new trash and trash that is being slowly uncovered as the mown weeds settle, we had a near record haul.

This doesn’t show the three bags we left in trash and recycle bins along our way.  We save the pull tabs off the beer and soda cans we find (another story), and we counted 42 cans.  That is a lot, but not near our record of 69.  We were out 3 hours and 45 minutes and covered 8 miles, according to my activity tracker.

We were running low on energy coming up the hill with our load of trash and came upon some candy.

It was a real lifesaver.  I found this along riverside drive. 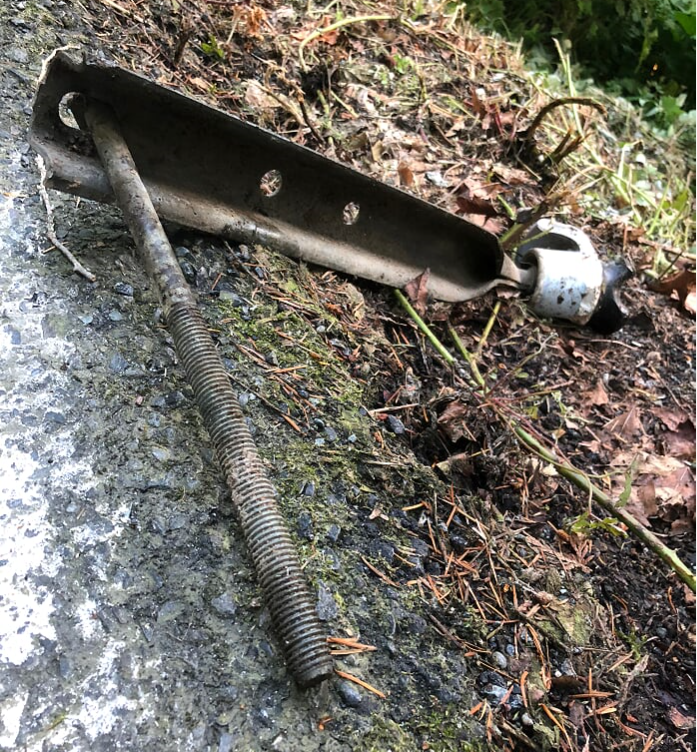 In a previous post, we talked about the dime bags we find. 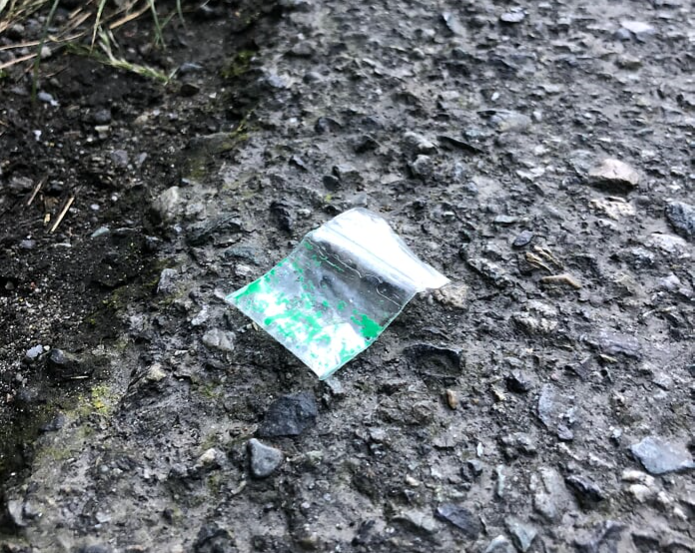 This is more like a nickel bag, about half the size.  And what Saturday walk would be complete without this.

Fresh wine bottles.  Vendange California Chardonnay, $7.99 for 1.5 liters.  And finally, we came across this. 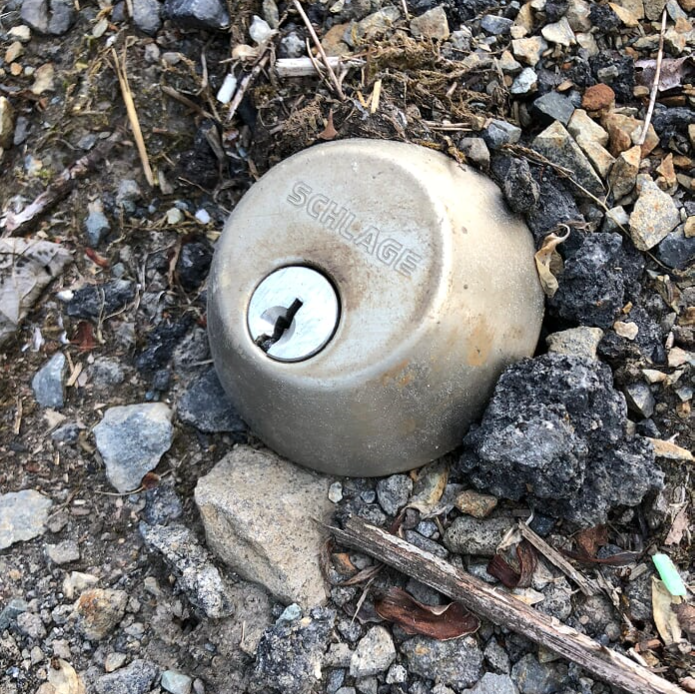 Is this the opening to an underground vault with vast treasures?  Morlocks?  Or just more locks?  Oh well, we didn’t have the key anyway.

One thought on “Galoves Galore”