Today’s walk was slow.  We waved at Salinas Construction, got a honk and wave from Mr. Handyman plus a few random waves.  This may have been a record roadkill day for us.  I flung a possum, two rabbits and one other thing.  Janet flung a small rabbit.  There was no sign of Janet’s geese.

We were slowed down by a bunch of confetti consisting of 3/4-inch gold and silver foil squares, circles and stars.  These were strewn all along 112th with most near Cedar Park School.  One piece of foil made it down to Juanita-Woodinville Way and was stuck to the possum that I flung.

The second thing that slowed us down was a sizeable Lego toy that had been run over near the intersection at 7-11.

For those playing catch-up, we keep finding men’s underwear within some couple-hundred feet of the same intersection.  After the first five pair, or so, we saw a pattern and started documenting them.   And yes, we do wear rubber gloves.

Farther down Juanita-Woodinville Way headed toward Safeway, a crow flew across the street and cawed frantically at us.

On our way back, on the opposite side, it was joined by another.  We didn’t see anything of interest they might be protecting, but we moved on quickly.  As I have said before, you don’t want to get on the bad side of a crow.

Today was a great day to walk and was the first time this season we have been able to see the Cascades from the top of Norway Hill.  We waved at Salinas Construction and got a honk from Mr. Handyman.  We got several random waves, a drive-by honk and a yelled thank you.  We also got a verbal thank you from a lady waiting at the Park and Ride bus stop.  We normally get waves from the busses that are traveling toward us in the opposite direction.  This morning, I glanced over at a bus traveling in the same direction and the driver was waving at us.  Everyone seemed to be in a good mood this morning.

It was a light trash day, except for the lingering confetti on 112th.  We found five bristles and six cents. We flung two squirrels and found these. 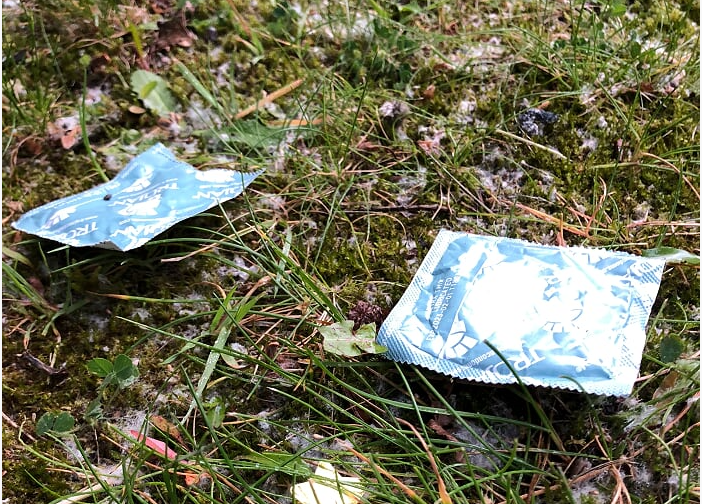 We got out of the house early today and had a relatively fast walk with only minor trash.  We flung a rat, found four pennies and four bristles.

The bristles are street sweeper bristles that break off the brushes during operation.  They are hardened steel and have many uses such as making tools, art, jewelry and especially, lockpicks.

So far, we have only collected them, but if we ever turn to a life of crime, we’re set.

It has been several days now with no sign of Janet’s geese.  They may have flown the coop.  Also, the tiny gnome has disappeared.

Today was another nice day for walking and traffic and trash was moderate.  Waved at Salinas Construction and got a honk from a minivan that is becoming a semiregular honker.

We came across a fender bender on 145th.

For once we were able to pick up car pieces before they were crushed into crumbs.  We probably removed key evidence from the scene.

I flung a small rabbit lying on the fog line of Juanita-Woodinville Way. Janet flung a butterfly.

I really feel I need to draw the line on what counts of a fling.

It was 57 F when we started our walk this morning, a bit warm, but still a nice walk.  Traffic and trash was very light.  We got honks from Mr. Handyman and a metro bus driver.  Lots of waves and found a penny, but little else of interest.  I flung a mole that was fully on the fog line.  Hey, it’s bigger than the butterfly. 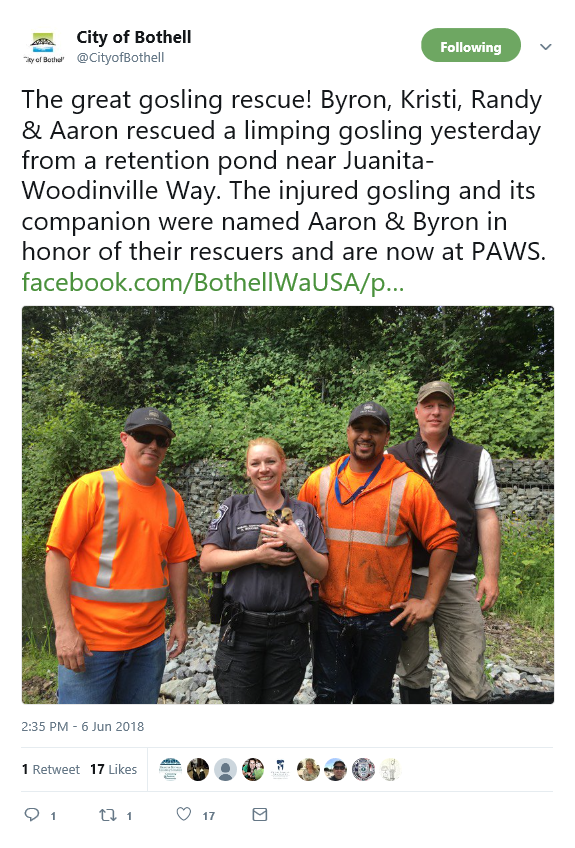 A further tweet indicated that the gosling’s leg was not broken, just bruised and they are being transferred to Sarvey Wildlife Care Center for rehab.

We find dime bags periodically, always empty, and we are not sure what the contents were.  The name comes from ten dollars’ worth of drugs.  And, yes, you can buy them on Amazon, appropriately named “BAD BOYZ”.

It was a bit cooler today and overcast.  During the walk, the sun broke through the clouds for a while then the sky turned very dark.  When we reached home, it started raining.  Good timing.

This was a moderate trash day for Riverside Drive.  We found a freshly-dropped, large wine bottle in the usual location.  Other than that, it was the normal assortment of trash.  We flung a rabbit off of Riverside Drive.

Since we have been walking, there have been a handful of garden plots maintained by dwellers across the street.

On the way back, we were worried whether we were on the right path.  Fortunately, we came across this.

It is evident that we are not very open to change.