We have two of our grandkids this week, so I will be walking alone.  Today was warm and traffic was light, but I did get a honk from Mr. Handyman.  I flung a small rabbit off the roadway.

This was a bad day for crows.

These two were a couple of miles apart as the crow flies, so there is probably no connection.

I found two more rubber gloves and a fingernail a few feet away.

I’m not sure how they are connected, or should I say disconnected?

What a better way to end a happy day at the Family Fun Center than to teach the kids to litter on the way home.

I really had the urge to eat this when I saw the cartoon guy eating it.  And yes, I picked up the cigarette butt also.

Our usual McLitterers were no-shows today, but they sent a stand-in. 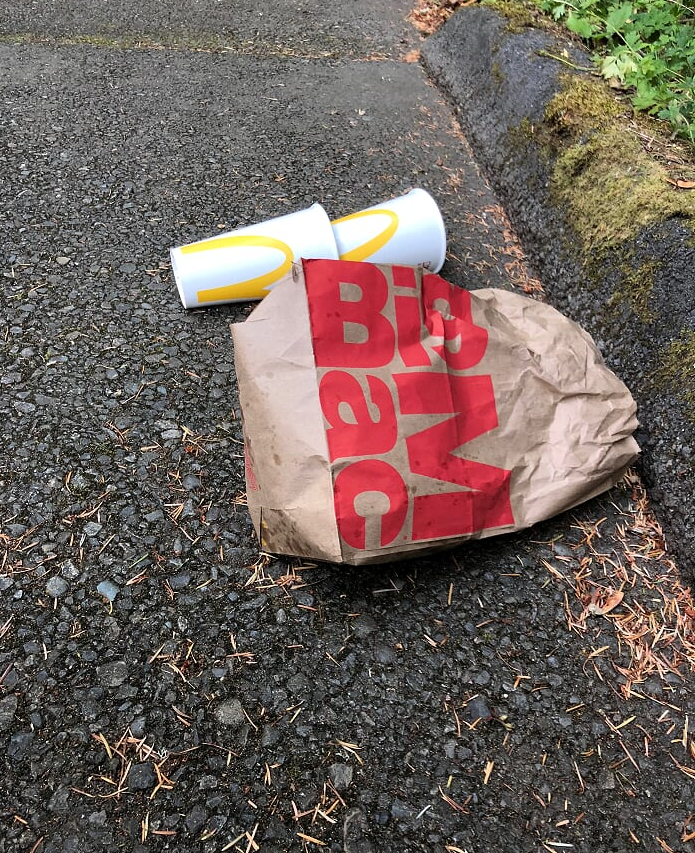 Happy Pioneer Day!  It was another warm day, 62 F as I left the house and close to 70 F when I returned.  I didn’t find anything to fling and got one drive-by honk and several waves.  I found a penny and a bristle.

I came across a diaper in the middle of the road.

Another good reason to  wear gloves.  Soon after we started walking, for a period of about six weeks, we found several disposable diapers.  I wonder how people like this are going to raise their kids.

These were found about ten feet apart.  I hope they worked.

More people who need to learn not to overfill their garbage cans.

Some critters, probably crows, picked through what they wanted.  I cleaned up the mess, but if it happens again, I won’t.

As I approached home, an SUV passed me travelling in the same direction then braked about 100 yards ahead.  I saw a bobcat bound across the street in front of the car and into the woods.  I switched to the opposite side of the road as I passed.

There have been several sightings of bobcats on Norway Hill, but this is the first one I’ve seen.  Unfortunately, I was not able to get a photo of it.

Today was another warm walk.  There were no honks, but lots of waves.  I think the honking Seattle bus driver is on vacation or has changed routes.  All the bus drivers wave except the Totem Lake Route 238 pointer.  I found two bristles and a penny. 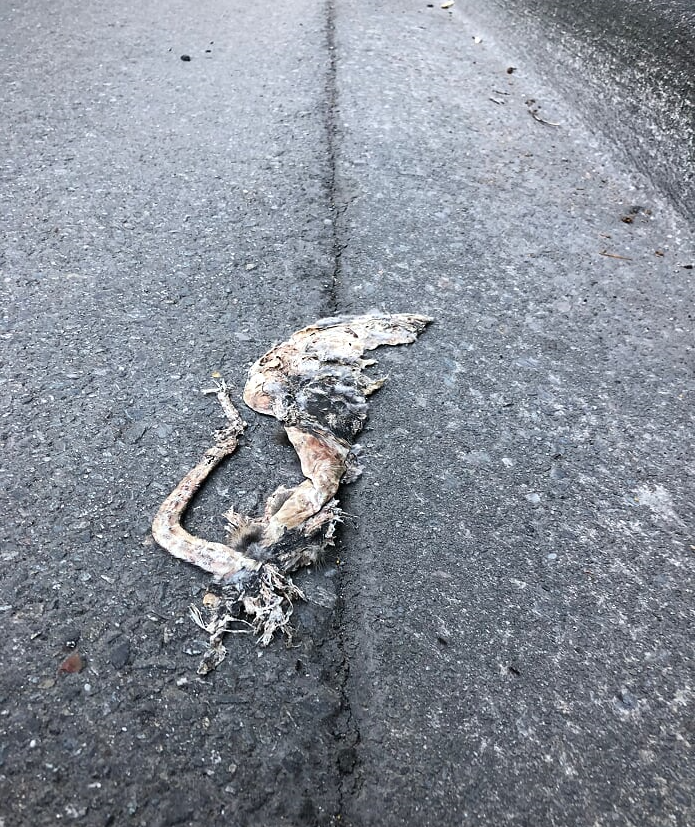 I don’t know what it was either.

Or six miles.  I found another glove. 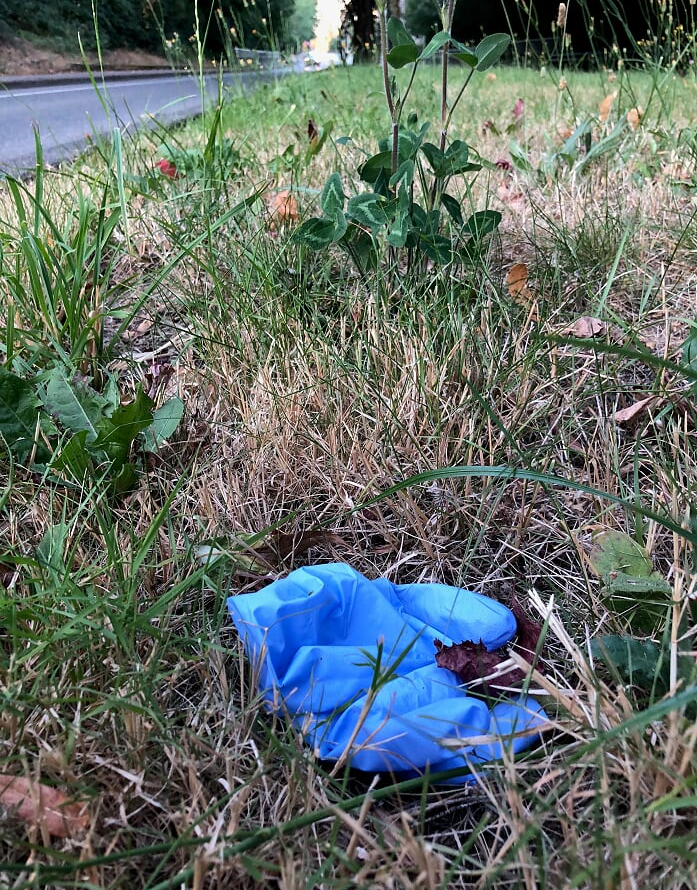 Gloves are becoming a daily find.

We know many of the regular joggers by sight and exchange greetings with them.

These two are new to us.  When I said, “good morning”, the woman glanced briefly at me, went eyes forward and ignored me.  The guy totally ignored me.  I guess I can’t blame them. 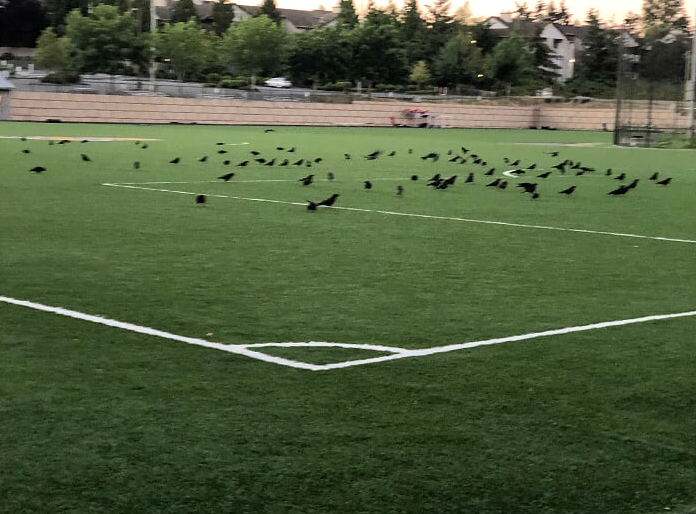 What are you looking for you silly crows?  It’s AstroTurf.

I’ll withhold any comments about why someone might toss it since we have a good friend who is a Packers fan.

Nearing the end of today’s walk, I heard and saw Woody.

Today was another warm morning.  I got a few waves but found nothing to fling.  I came across this. 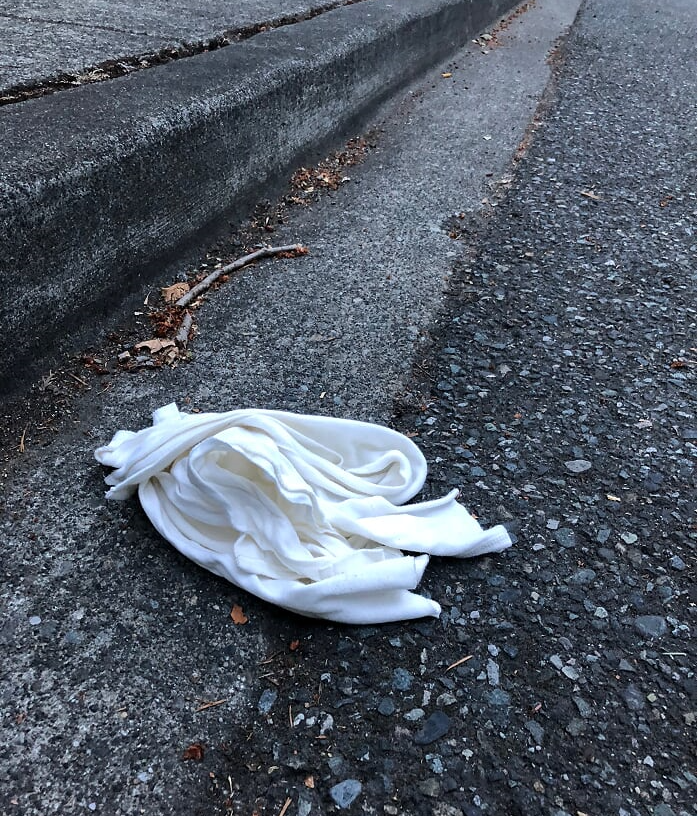 It looked like more underwear only cleaner.  It turned out to be a rag.  I found a ping pong ball and a baseball. 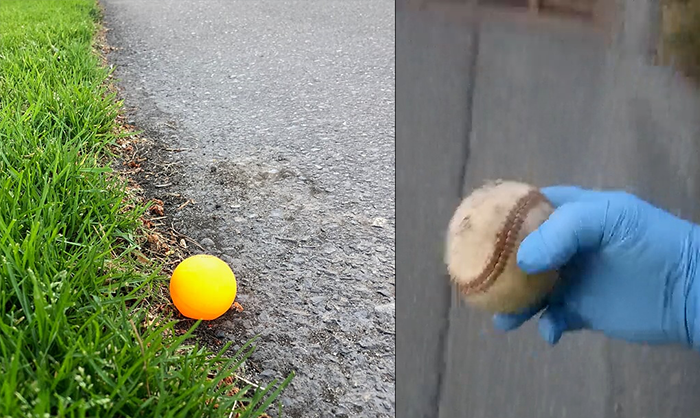 These were added to our ball collection.

This was free, so I took it.

This is left over from a stand selling Rainier cherries.  I was going to open a ticket with Bothell to have it removed, but Janet thinks they might be coming back.  The signs behind the utility box are near where the stand was, but the sign in the ditch is about 100 yards away.

We find mostly cigarette butts but are finding more trash from e-Cigarettes.

I found someone’s Social Security card and a membership card to the Ember Hookah Lounge.

Uh, how do you operate a telephone pole?

Yet another warm day and the last day of walking alone.  I got several waves from drivers and a couple of headlight blinks.  I harvested a downed sign and found a penny and two bristles.

A baby bristle and a mangled bristle.  There is a guy that I meet periodically.  I wave and say “Hi” he always smiles and waves.  This morning, he started using sign language to ask where my wife was.  I said we have grandkids over and he smiled and nodded.

Just open your car window and toss out whatever random trash you have.  I found a bungee cord.

We find a lot of these and unfortunately most are in this condition.

It’s a good thing I saw this.

This is a new one.

I followed this guy for about a half mile:

He walked out of the Safeway driveway with headphones on while reading a newspaper.  I was walking faster than him but was slowed down by picking up trash and harvesting the sign.  He finally crossed to the median and turned to wait for a break in traffic.  When he saw me, he removed his headphones and asked how I was doing today and gave me a thumbs up. This marks 6 weeks without moving.

Janet is off grandkid duty, so I have a walking partner again.  Walking is much better with a partner.  Today was another warm morning but there was a slight breeze that helped.  I flung a snake, a small bird and a fresh-roadkill squirrel.  We found the squirrel on our return walk up the hill, so it was hit while we were on our walk.

The McLitterers were busy on our Saturday Riverside Route.

On our way down the hill, we found two McDonald’s bags and three cups.

This being the Saturday route, we found the usual wine bottles. 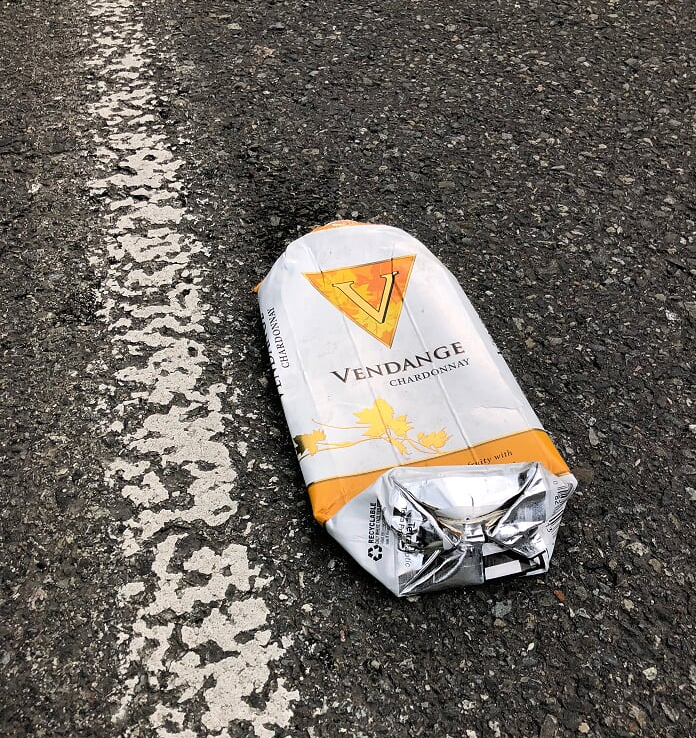 We found this very big nut: 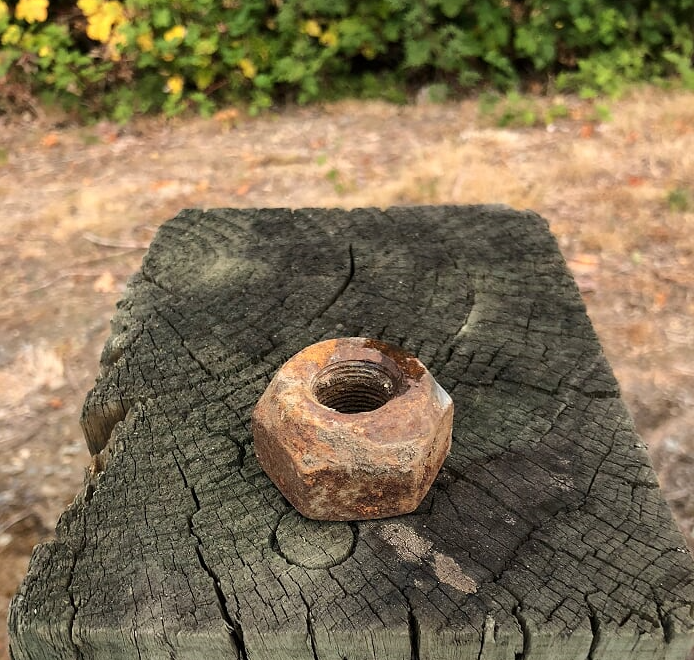 I don’t remember the name of this type of nut, but I had to lug it home. 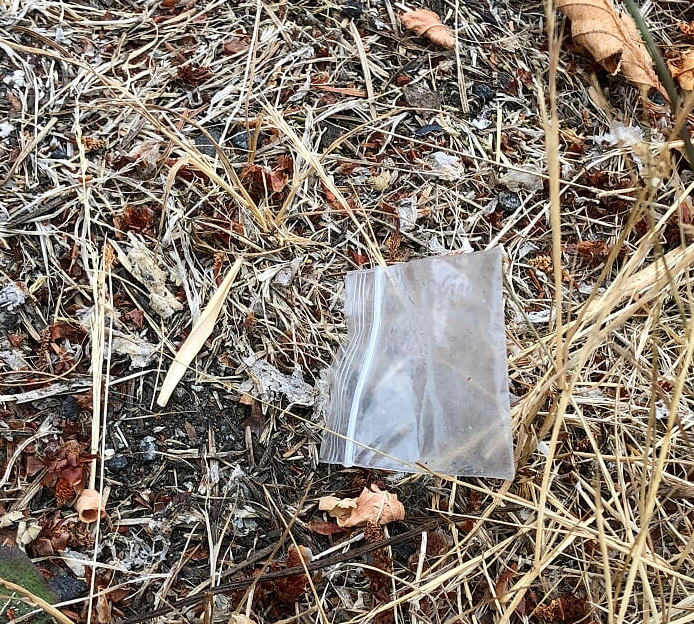 We found a rather boring dime bag.

A little research shows the Spice Hut in Bellingham and it is owned by Mundir Sidhu who is shown in the picture.  Maybe we can redeem this.

This was a banner day for rubber gloves.

We found five of them.  We came across the remnants of an accident outside some apartments. We picked up most of the little stuff and left the two big pieces in the driveway.  I bet we see them next week.  Later, on our way back, two dog walkers tried to get their dogs to make friends.

But the dogs were having nothing to do with it.

We shamed Woodinville into cleaning up! 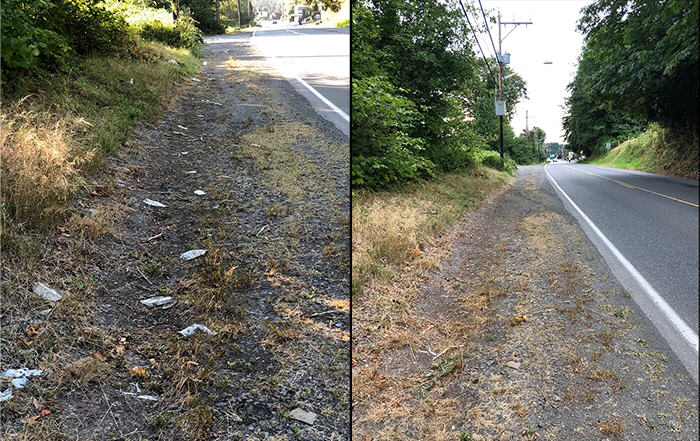 On the left is a photo we took of this stretch of road in Woodinville last week.  This morning is what it looked like.  We’ll see if they keep it up.

On our “cool down” lap on 112th Ave NE, we were walking along the condominiums and Janet spotted something purple up an embankment. A pair of women’s briefs.  Then, another surprise.  On the other side of the embankment, we found a trove of scattered refuse along with some large garbage bags full of trash.  We picked up the scattered litter and stuffed it into the bags with the other trash. 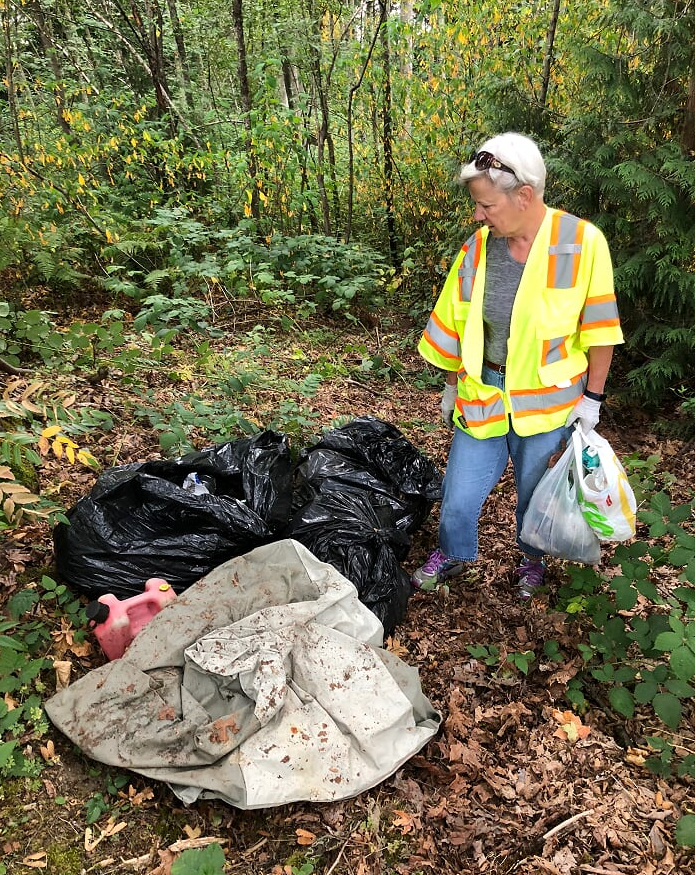 The last time this happened, there were a couple of plastic storage boxes filled with trash.  We will contact the city and see if they will take care of it.  If not, we will try other avenues.  Who knows, there might be some real treasures in there.  NOT.

One thought on “We Shamed Woodinville”