We awoke earlier than usual, due to going off daylight savings time and missed all our normal honkers.  No honks, no thanks, nothing.  A thankless morning.

We found two large water jugs in front of the apartments on 112th Ave NE.

But we found eight caps, so where are the other six jugs?  It’s an expensive way to top off your radiator.

If you know Sara T., let her know we found her cup where she tossed it.

And maybe her gloves also.

Someone’s been popping pills at the bus stop.

This morning was cool and dry.  We got a honk from Mr. Handyman and waved to Salinas Construction.  We found this weird little doll. 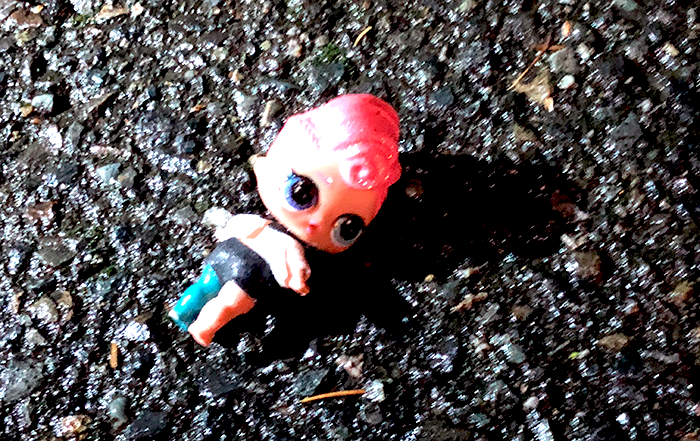 It has one blue eye and one green eye, one blue leg and one pink.  This appears to be an LOL Surprise! doll.  We were surprised.

We found another hubcap, VW this time.

Tok’in at the Park and Ride: 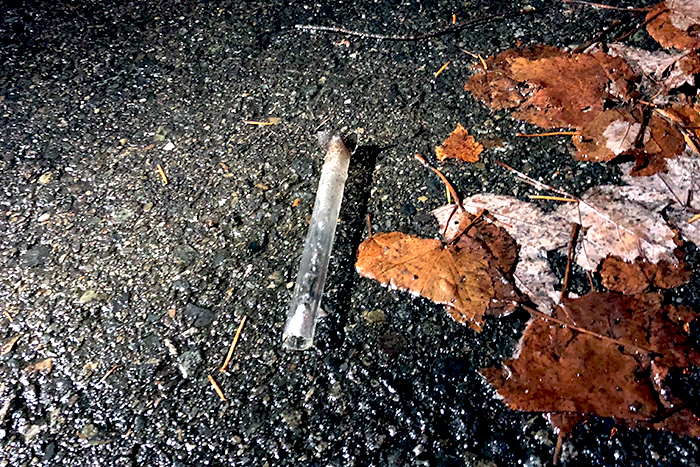 Another cracked crack pipe in the Park and Ride parking lot.  Just getting ready for work.

Hopefully they do better at road work than they do at putting up signs.

The mornings are getting cooler.  It’s getting time to wear our rain jackets for warmth as well as rain.  We got a honk from Mr. Handyman and found two batches of discarded stolen mail, all junk.

With the leaves gone, we found some fresh cigarette butts.  Oh Joy.

We found a plastic bottle filled with,

Sunflower seeds?  We found a spoon in front of an espresso stand.

It must have been strong coffee.

We also found a lost car antenna near a beer can. 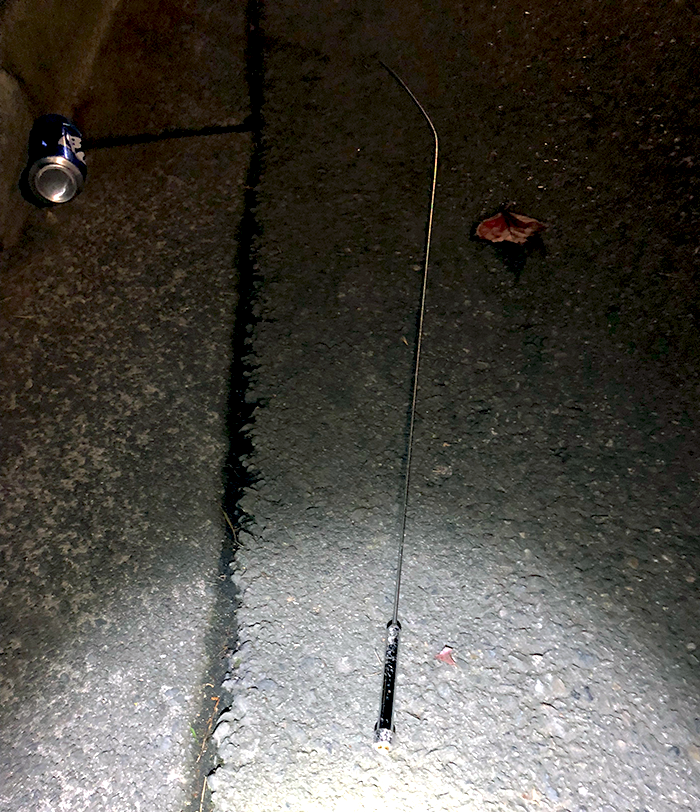 This was a prophetic as near the end of our walk, we found a can in a ditch with some water in it.  Chuck spent about five minutes dueling the can with the antenna trying to fish it out without getting his new shoes muddy. 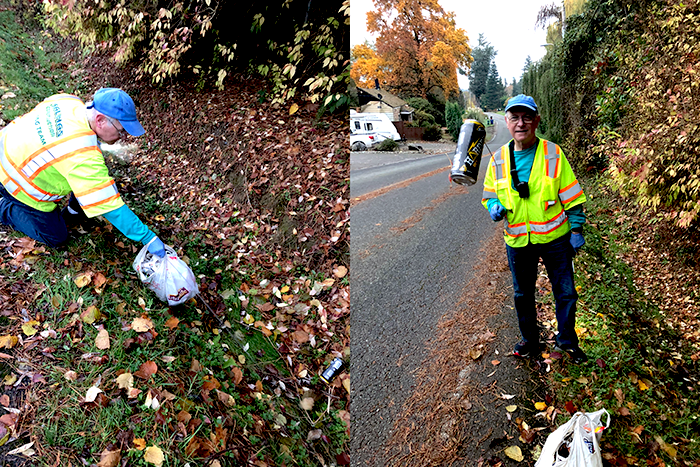 Success!  But wait, is Chuck as smart as a crow?  Remember this old video?

This crow achieved its goal by making a tool.  Chuck found his.  The crow took less time too.

35F this morning, the coldest of the season so far.  We wore our rain jackets for warmth, but it didn’t help our fingers.  We got one drive-by honk and waved to Salinas Construction.

We found the CD jacket for the 2005 album, “Graffiti the World” by Rehab. 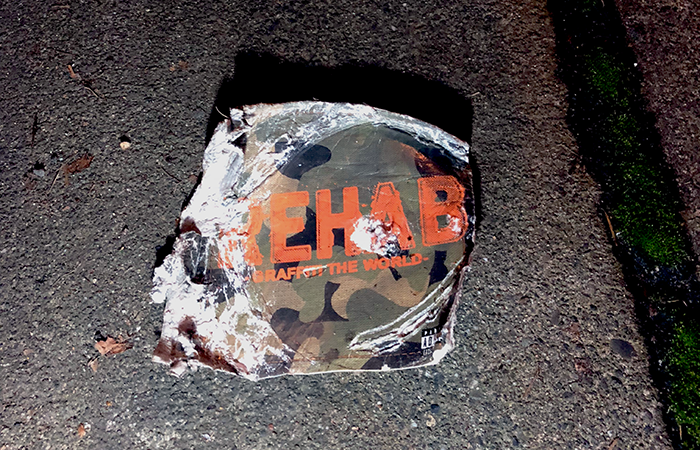 According to Wikipedia, Rehab is an American Southern rock, country, and alternative hip hop band.  we get how southern rock and country are related, but how does hip hop fit in with those?  We found another tool.

This one was in good condition, hardly run over at all.  We found someone’s empty pill bottle. 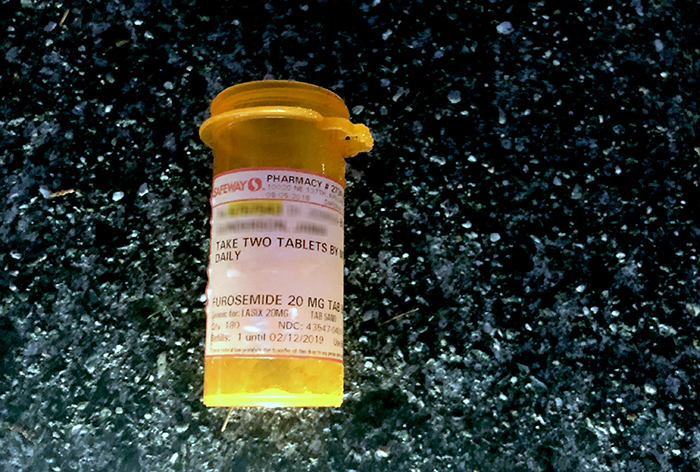 Near this was a Safeway pharmacy bag with the receipt and drug facts sheet, but no pills.  Our guess is it was stolen by someone who grabbed the pills and discarded everything else.  They are “water pills”.  Good luck getting high on those.

We came across someone’s sheet music.

At the top of the hill, I took another trip into Gatorade Gulch.

Four cans and four Gatorade-Butt bottles.  It has been almost four weeks since we last ventured in.  We may have missed something due to the leaves.

This was another dry, chilly morning with light traffic and trash.  We didn’t see any of our regular honkers.  We often see three men waiting at a bus stop across the street from us on Juanita Woodinville Way.  We have trained them to wave at us and this morning we got a nice synchronized wave.  Coming back from Safeway at the same bus stop, we met another rider we have seen several times.  As we approach, he always takes a quick look around the bus stop shelter to check for trash.  We don’t know what he would do if there was any.

Early on this morning’s walk, we found what looked like a wheel.

It turned out to be what seemed like a five-pound weight.  We left it on a guard-rail post and will pick it up tomorrow since we will be near the end of Saturday’s walk.

We found this plastic object in the gutter.

It turned out to be a coil cover for a Wilson 2000 Trucker CB antenna.  One of the reviews on Amazon stated that it is inflexible and will break if it hits something.  I guess so.

We also found another glove.

If it had three fingers, it could belong to Mickey Mouse.  It was in poor shape so went into the trash.

Whoever tossed this evidently decided to cut bait rather than fish.

We found another Gatorade-Butt bottle.

But it wasn’t in the Gatorade Gully!  Can’t anyone follow the rules?

However, in the Gatorade Gully, we found a fresh Bud Light can.

It was close enough to the top that we were able to easily retrieve it.

Here’s something you don’t see every day. 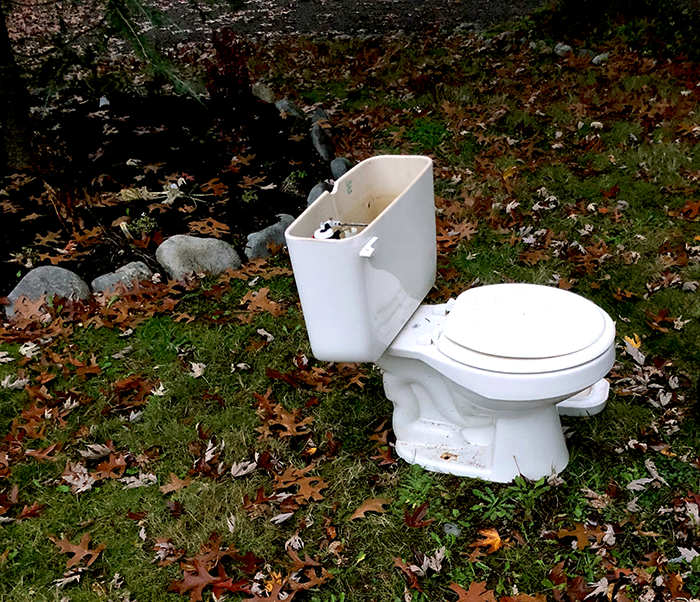 Maybe they’ll make a planter out of it?  Otherwise, it’ll be down the toilet.

This morning was a balmy 40F that made for a comfortable walk with our rain jackets on.  We flung a small rat to add to our tally.  There was a moderate amount of trash but nothing onerous and there were a lot of recycle containers left out for us.

One of our first finds was a McLitterer bag.

It was a standard issue of two clean platters, unused utensils and unopened syrups and butters.  This is the first one we found this week. 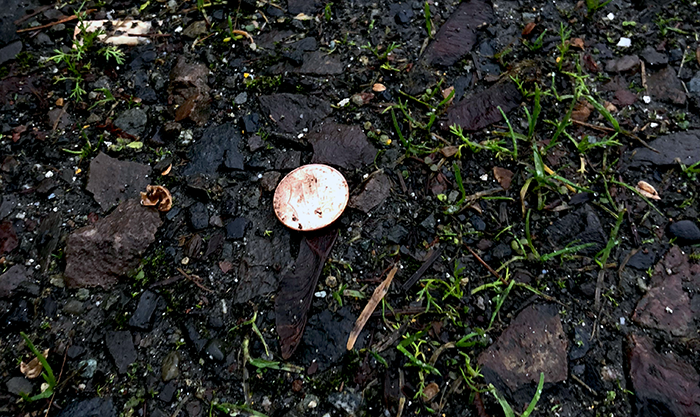 This is the first money we’ve found in a few weeks.  Our hourly wage keeps dropping.

We also came across two gloves, one knit and one rubber and a ball. The ball is a Chuckit Ultra Ball dog toy.  Regardless of the instructions, we didn’t chuck it, but put it in the ball collection.

In one area on Riverside Drive, we used to find large wine bottles but haven’t for a while.  Today we thought we saw one, but it was normal 750 ml wine bottle. 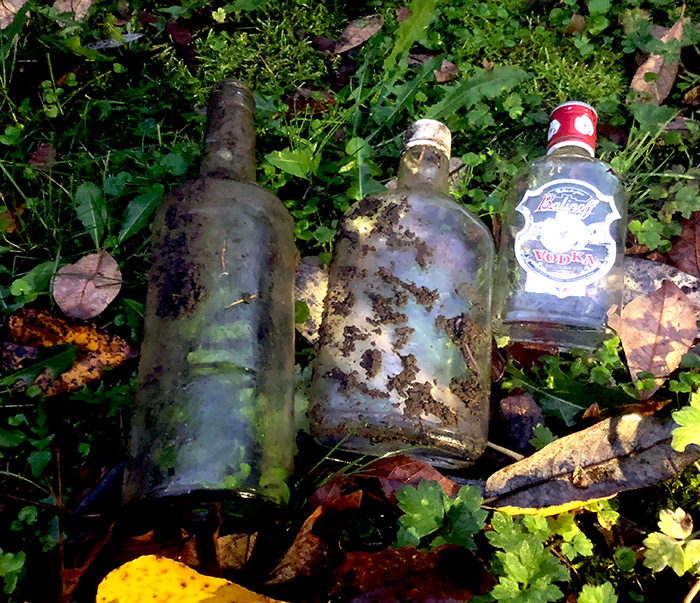 However, while extracting the wine bottle, we found two other discards.

We found a discarded “Do Not Discard” sticker.

We found a pair of women’s underwear. They went straight into the trash.