The weather cooperated this morning, the temperature was 41F with no rain.  However, due to the cold days, we have not done this route for a week and we paid for it.  There was a lot of trash, cans, bottles, candy wrappers, etc.  It made for a long 2-hour and 45-minute walk.

We did find two pennies,

but only got a picture of one.

Someone lost their washing machine hose.

They shouldn’t be driving their washer around town anyway.

More rubber gloves along the route. 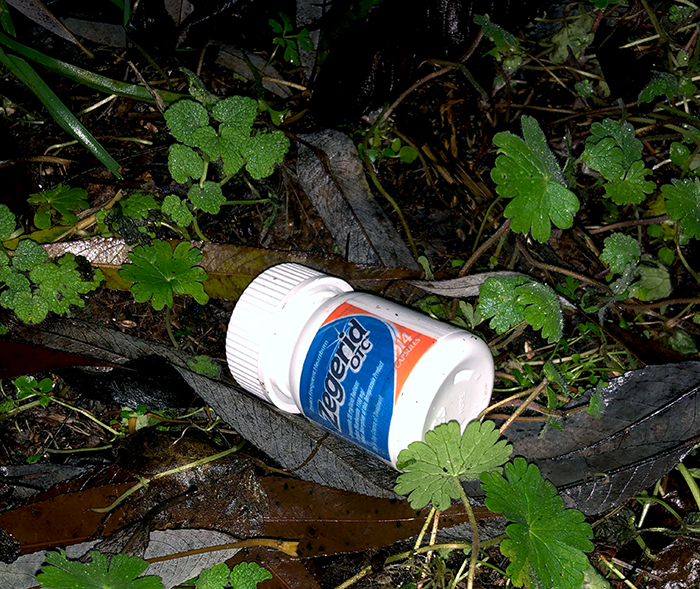 Your trash gives us heartburn.

We found a princess ring.

And not in Gatorade Gully. 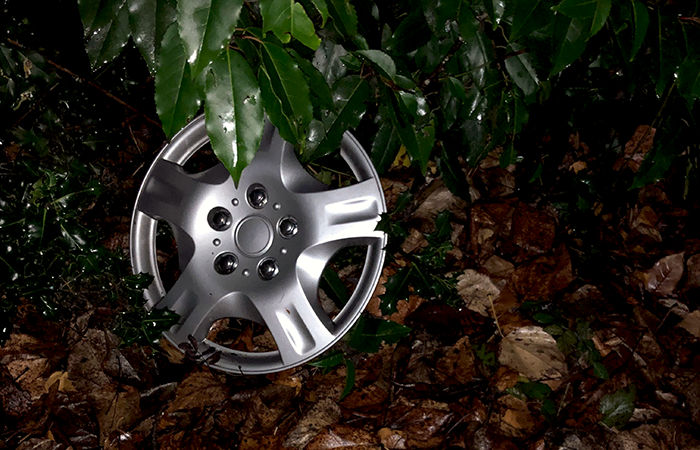 It was in bad condition and got recycled.

This looks like trouble.  Near Safeway, on one side of the street, we found two identical lug nuts.

Then, on the other side of the street, we found another.  At best, the wheel is probably ruined.  At worst, “You picked a fine time to leave me loose wheel…”

We found this knob.

It was marked with a letter “A”.  Air Conditioning? All-Wheel Drive?  Toss me out before Knob B?

We found another knob.

We’ll check our Owner’s Manual, but we don’t think our car has this option.

This morning was misty and a warm 42F.  There was a lot of traffic and the normal amount of random trash.  We waved to Salinas Construction but did not see any of our normal honkers.

We thought we’d found a dime,

but when we got home, we discovered it was only a copy.

We often see this jogger and his dog on our walks.

We call him the Happy Jogger because he is always smiling and gives us a cheery “Good Morning” whenever he passes us.   This morning, he was waiting for the walk signal at an intersection when we approached and exchanged pleasantries.  I was petting his dog and none of us noticed the walk signal had changed.  A car was patiently waiting for us and we hurried across the street.  The dog should have told us the signal had changed.

We found part of a hub cap that looked eerily familiar.

From the clothing department,

we found a glove and a cap.

From the health care department,

a feminine hygiene product and Q-tips, both unopened.

From the toy department, we saw something that looked like a partially-buried beer can.  As it emerged, it turned out to be a long-buried Razor Scooter. 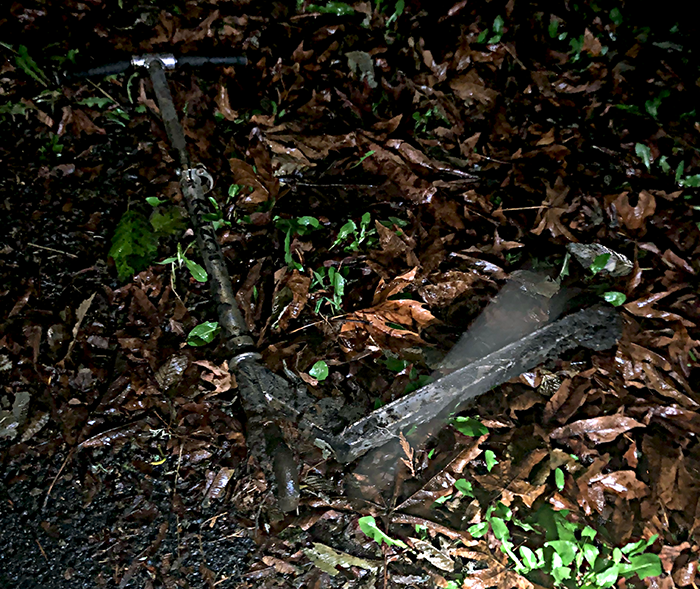 It was very muddy and the front wheel didn’t turn. Too bad, it would have been a fun ride down the hill.  We ended up carrying it home to recycle.

This morning we got a honk from the Shave-and-a-Haircut SUV.  Again, there was a lot of little trash and we are picking up a lot of cigarette butts.  At one point along the Juanita Woodinville Way, someone had emptied their ashtray on the street.  Why can’t they use a Gatorade bottle like everyone else.

We found a spherical spring. 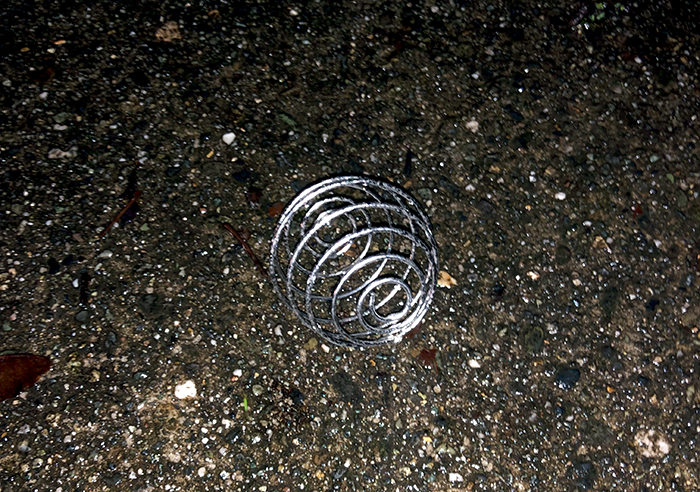 The main use appears to be teaching people how to use CAD systems.  Maybe a Christmas tree ornament?

We found a Jolly Ball.

Not so jolly now.

Someone tossed out a bell pepper.

They must like them as much as Janet does.

We found two more signs left over from the election. 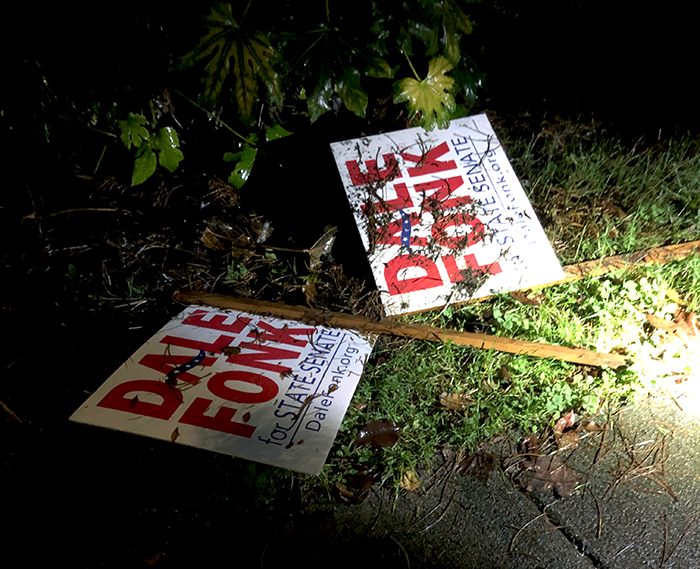 They had been tossed behind some bushes.  Good public citizens.

Someone lost an earring.

We found it and promptly lost it again.

This morning was a nice walk with a slight mist and a temperature of 45F.  We got honks from Mr. Handyman and the tan minivan and waved to Salinas Construction.  We also flung a small bird.

Near the park and ride, we came across this.

We had a discussion as to what it might be.  In better light, it appears to be the head of a clown or an elf with a pipe.  Kind of eerie-looking, though.

Walk-ins only with no posted times?  Five dollars off, though.  This is acupressure, not acupuncture.  I would never have considered someone sticking pins in me as relaxing.

We found this in a ditch.

A dog trying to hide it from its owner?

Overall, today’s walk was kind of boring, but at least we got our exercise.  Or maybe that’s just sour grapes?

Today was another nice walk with mild temperatures and no rain.  Traffic was Friday-light and we got a honk from Mr. Handyman.

It was lost, then found, then lost. 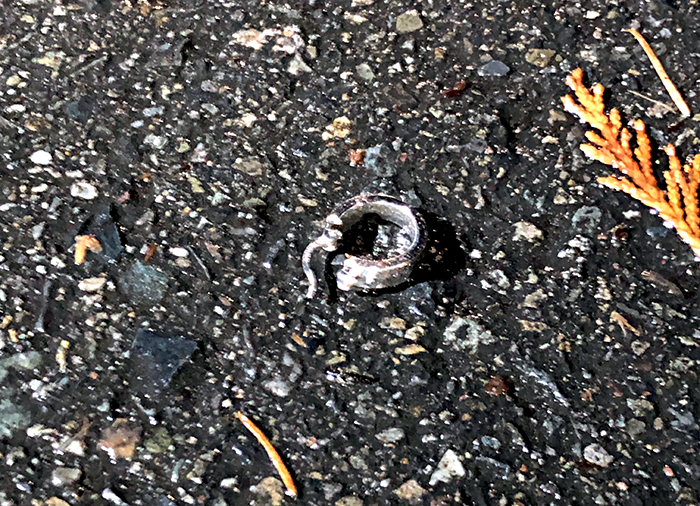 This morning we refound the earring that I dropped Wednesday.  It is only about a half-inch in diameter.

We also found a ring in the gutter.

It’s made of some kind of metal, but has no markings on it.

We found a balloon, 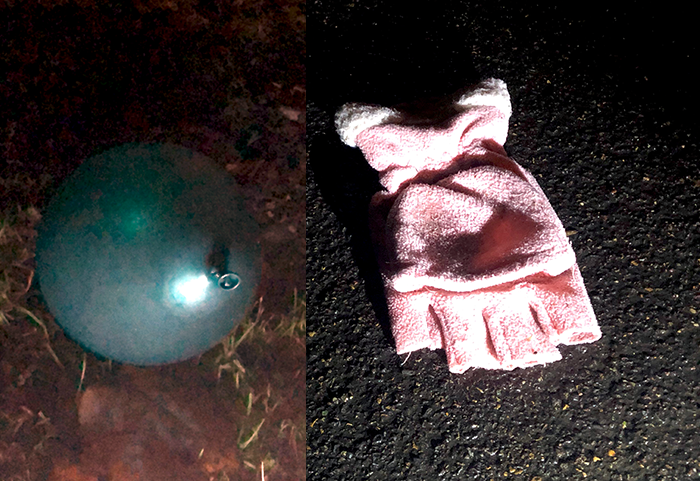 and a glove with missing fingers.

There has been an electric LimeBike parked at the top of Norway Hill the past several days. 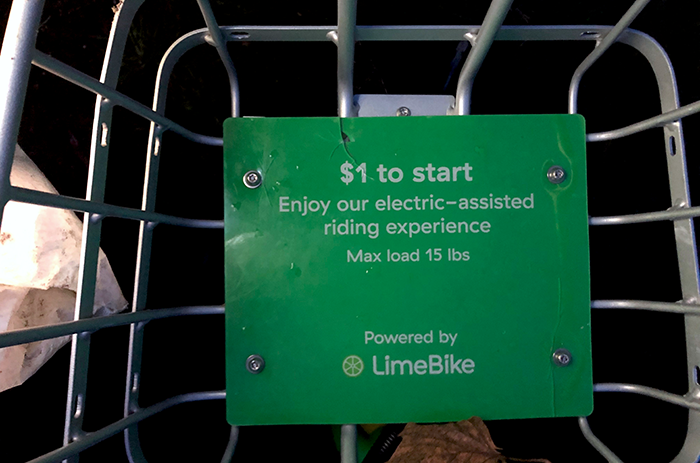 Max load 15 lbs?  No wonder it’s setting there, we don’t think anyone weighs less than 15 lbs. 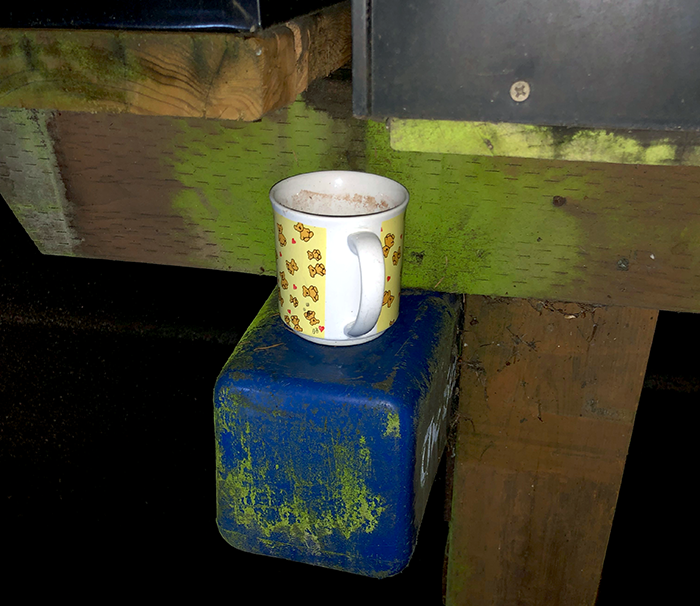 A coffee cup behind some mailboxes.  This could be a gift for the mailman?

We also passed these.

Gifts for the trash collectors.  Recycle Man, Yard Waste Man and Garbage Man.  How about one for Cleaning-Up-the-Streets Man?

We had some strong winds last night, but we bought some gasoline for our generator earlier this week, so our power stayed on.  We didn’t fling any roadkill, but we flung a lot of branches off the road.

We also bought a Christmas tree this week.  We should have saved our money and used some of the downed branches to make one.

The LimeBike we pulled out of the ditch last week was another victim of the winds.

Someone’s Christmas decoration was blown into the gutter. 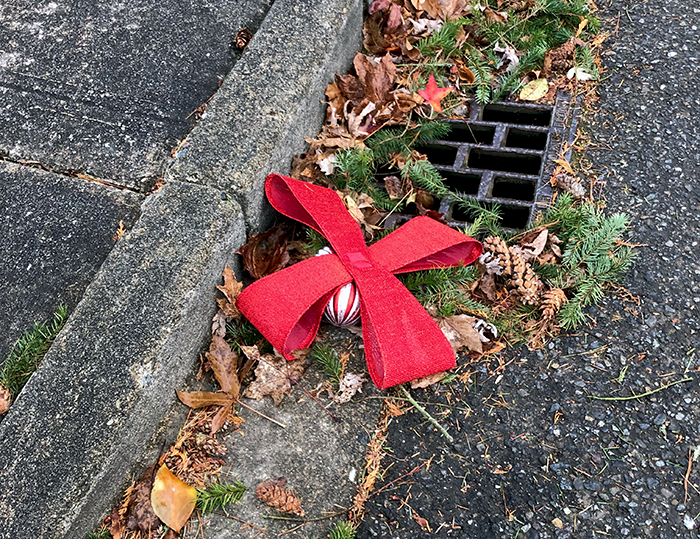 We found a pair of gloves.

But they didn’t match.

We found a wrench. 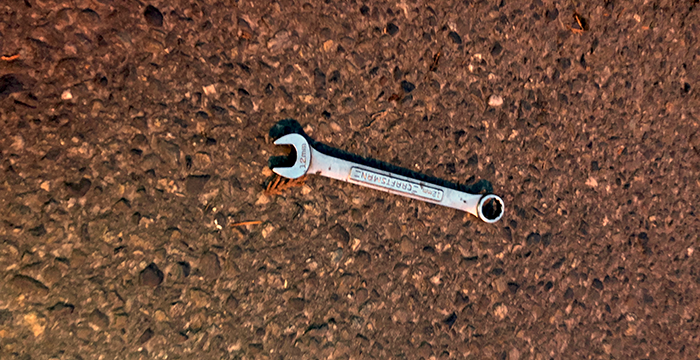 12mm Craftsman.  It is now in our found tool collection.

We also found a big spool in the ditch.

It was too big carry, so we will pick it up later with the car.

Another victim of the wind.

The wind wasn’t that strong.  The post looked like it had been broken and was taped up.

We found another hubcap.

A Toyota, this time.

We also found a penny.

The McLitterers made an impact this week.

It was not neatly tied up like most of theirs’s.

Someone painted a message on the grass. 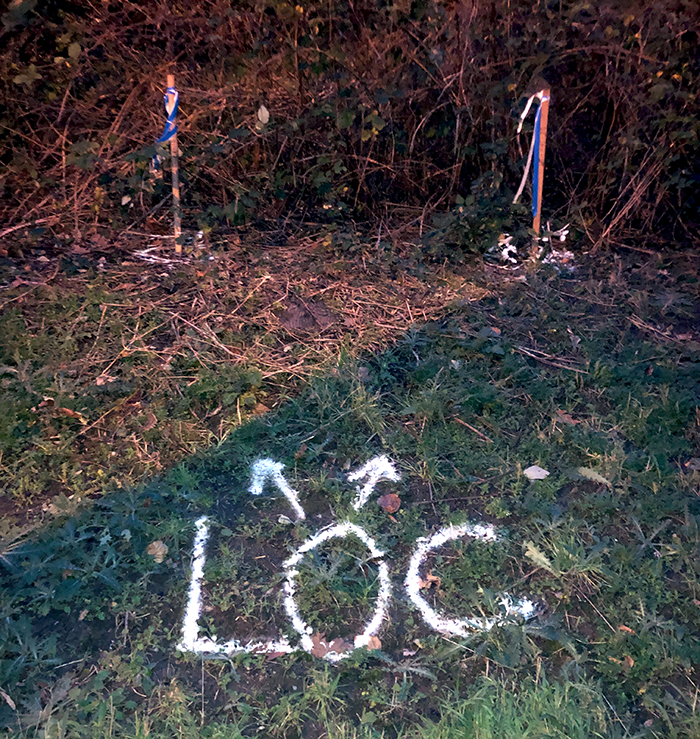 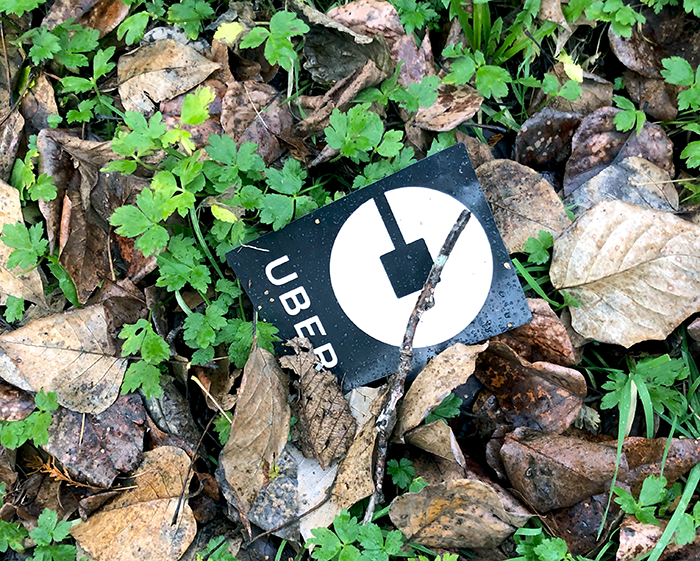 Maybe I’ll paste it to my vest.

We have seen cars that have been keyed,

But this is the first time we’ve seen a key that had been “carred.”

Someone left a disassembled motor for the recycling.

But the recycle guy didn’t take it.  Maybe they should have left him a Christmas gift like the people did yesterday.