We were snowed out much of the week.  It was not the “Snowmageddon” of last year, but dropped enough snow that we could not safely walk.

We did have three days of light snow that needed to be cleared.

So, while Janet slept in, Chuck got his exercise shoveling the driveway, part of the street and the area around the mailboxes.

He didn’t wear his walking vest though.

There was some excitement.

We had a rabbit stampede in our driveway.  The seismograph near us shows some activity early in the morning of the 14th.

We’re sure it was caused by the rabbits in our driveway.  We slept through it.

The Battle of the Weather Apps.

Since we walk early in the morning six days a week, we keep our eye on the weather, primarily the temperature.  We have two smartphone apps that we use to track the weather.  A week ago, we spotted this discrepancy.

Our favorite weather app, Dark Sky on the left showed temperatures for Tuesday and Wednesday at sub-ten degrees Fahrenheit.  Our other app, Yahoo, predicted it was going to be seventeen degrees warmer on Tuesday at 23 F.

So which was correct?

By Tuesday, Dark Sky had changed its tune and was in full agreement with Yahoo.  So, in this case, Yahoo was the winner for the long-term prediction.  However, in the short-term prognostication, Dark Sky seems to be more accurate.

Wrapping up a loose end.

Last summer, the State of Washington placed a gypsy moth trap on a tree along our walk.

From the state’s website, they say “Each year dozens of trappers set up 20,000 – 30,000 traps throughout the state to monitor for gypsy moth introductions.”  Davy Crockett wore a coonskin hat.  Wonder if these trappers get to wear a mothskin hat?

Anyway, we dutifully checked the trap whenever we passed and never saw a gypsy moth inside.

One day the trap disappeared and eventually they posted the results of their thousands of traps.  They caught a total of 14 moths. 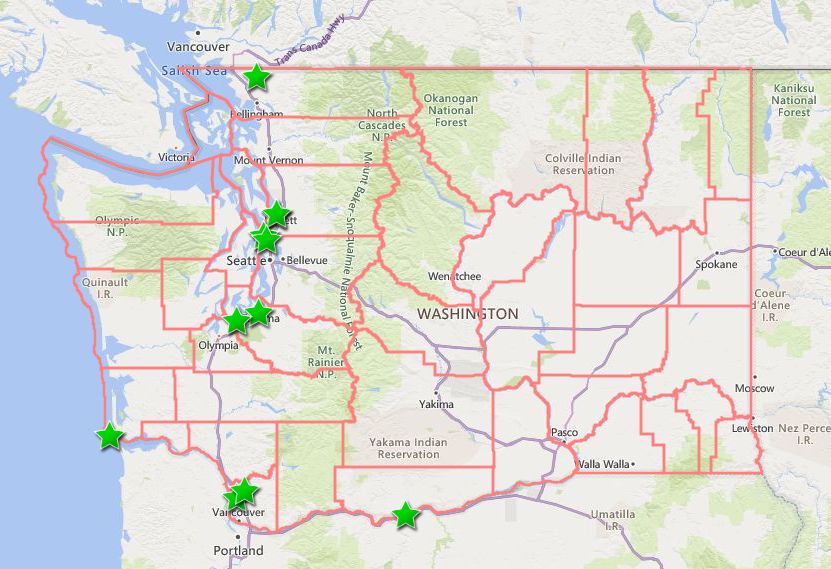 That isn’t very cost effective.  So, we’re thinking of starting a gypsy moth ranch and selling them to the state if they want them so badly.  Branding is going to be a bit dicey, though.

The snow finally cleared enough for us to venture out on our walk.  There were some icy spots we needed to be careful around, and a beer can we left in a ditch because of the surrounding snow.

And, yes, we picked up the cigarette butt too.

At the bottom of the Tolt Pipeline trail we found beer and soda cans.

Six beer cans neatly tied up on the left and some soda cans flattened.  So, they were probably left by two parties.  That could be ‘party’ as in different people or ‘party’ as in a group of people drinking and having fun.  And littering, of course.

Then at the top of the pipeline trail,

pot wrappers along with empty Walgreen’s and McDonald’s bags.  So which one sold the pot?

And they matched, for once.

Another tennis ball for our ball collection.

We thought it may have been part of a devil’s costume, but it turned out to be a rake that had been run over and flattened.  It didn’t make a very threatening pitchfork.

We found a soft-rubber part that we didn’t recognize.

After some searching, we determined it was a mouthpiece for a CPAP machine to treat sleep apnea.  We don’t know how it ended up in the road.  Perhaps someone was sleep-driving or sleep-walking?  We often feel like taking a nap on our walks.

This one’s from a Chevy Suburban or similar vehicle and in good condition.  It will probably end up at Goodwill.

Really?  We’ve found a few of these, so why would people toss them out the window?  Or perhaps they accidentally dropped it.  We found there are a lot of uses for them.  We may start carrying them on our walks.

Then another Bungee strap.

This one was disassembled.  We figure the guy got a Bungee cord kit for Christmas, found it was too complicated to put together and tossed it.  We were able to figure it out.  It did take a while.

Janet had an early appointment today, so instead of our normal Saturday walk, we used the shorter Park-and-Ride route.  It was a good thing because it was 37 F, breezy and raining heavily for most of our walk.  It made for an uncomfortable morning.

Yesterday at the top of the Tolt Pipeline trail we found a bunch of marijuana wrappers.  Today we found more.

A total of seven pot tubes.  Oh, and an empty SweeTarts bag.  Marijuana is supposed to  make you hungry.

At the bottom of the pipeline, it looks like someone blew chunks.

Someone purchased an expensive snow pusher.

$110 on Amazon.  Doubt they got their money’s worth out of this storm.  We only got about three inches total in our area.  Our $15 model worked just fine.

Since it’s Saturday, we wrap up the week in poop bags,

Eight of each for just two walks.  We normally find mostly disposable rubber gloves with one or two work gloves.  This week all but one glove were winter-weather gloves.  You should be wearing them, not leaving them on the top of your car.

We see the Taco Time Tokus survived the storm.  Dammit.

Someone left their dinner at the Park-and-Ride bus stop.

No, it didn’t look appetizing to us either.  We fed it to the trashcan at the bus stop.

Bomb Bombz God’s Gift.  According to their website, “A very smooth and refreshing flavor of the drink Kerns Guava Nectar that will make you lick your lips and beg for more.”  Beg for more?  Really?  We haven’t seen many of these for a while because Washington State banned the sale of flavored vaping fluid for 90 days on October 10th.  The ban expired on January 8th.  Let the littering resume.