We took our granddaughter to a gymnastics meet in Battle Ground Washington so missed walking for Monday and Tuesday.

We have passed by the town of Battle Ground and wondered what the background of the name was.  We searched on our phones but got little information.  More research at home from Wikipedia, there was a standoff between Captain Strong of the U.S. Army and Chief Umtuch of the Klickitat tribe.  Presumably it was more than just the two of them:

Details of the standoff that ensued vary. However, indisputably, Chief Umtuch and Captain Strong engaged in some sort of negotiations which resulted in the Klickitats’ agreeing to return to the Barracks. After this decision though, at least one shot was fired that murdered Chief Umtuch, likely by one of Captain Strong’s soldiers.

We’re not sure a single shot qualifies as a battle ground.  The article goes on to say the town was originally called Strong’s Battle Ground and later shortened.  We think it should have been called Umtuch’s Battle Ground.

As for the gymnastics meet, our granddaughter, Lucy, took fourth place all around in her division.  We are very proud of her.

It was good to get back on our walks today.  The temperature was a relatively warm 43 F and dry.  During our walks along Juanita-Woodinville way, we wave to vehicles we see regularly, including the Metro and Expedia buses.  Today, as we neared the end of Juanita-Woodinville Way past Safeway, a bus passed us from behind and we noticed a wave from the driver.  The bus was stopped by the light and as we caught up with it, the driver again, enthusiastically waved to us and we waved back.

Perhaps the next time we take the bus into Seattle, we should wear our walking gear and carry our trash bags.  We may get a free ride.  And lots of elbow room from other riders to boot.

Today we found some money.

Hey, it’s not much, but every penny counts.  This would be a good thing for many to take to heart.

It was in bad condition plus it was a bit blurry, so we dumped it into the 7-Eleven recycle dumpster.  Hey, don’t shoot the photographer when he’s shooting in the dark.  No, not like a “shot in the dark.”  Moving on.

For clothing, we found an Alaskan sock.

But only one, as per normal.  These single socks must be the ones that escaped from the dryer.

Also someone lost a neck gaiter.

We can see losing a ring, a glove, or some keys.  But this is hanging around your neck, for Heaven’s sake.  Give us a break.

What walk would be complete without an appearance from the Taco Time Tokus? 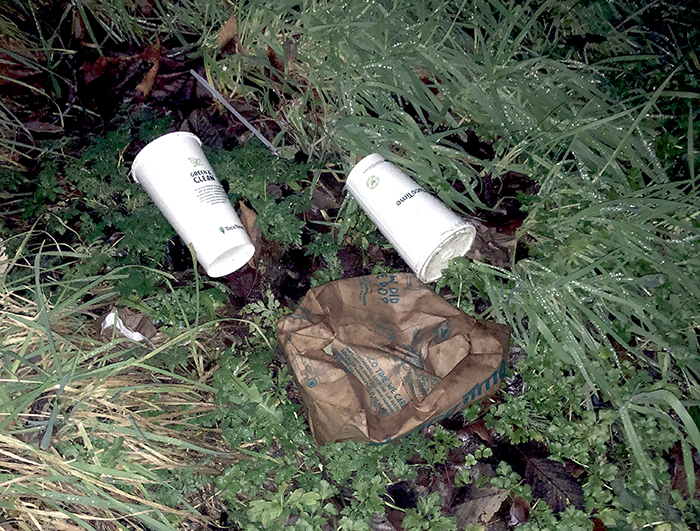 Certainly not this one.

Inexplicably, someone hit a telephone pole on Norway Hill.  OK, maybe not inexplicably.  Alcohol, or other substances may have been involved.  They left their mirror.

This mirror is very suspicious.  It appears to have a hidden antenna to communicate back to an extraterrestrial mother ship.  Or maybe it’s just the mirror defroster.

The pole seems to have fared better than the car with only minor bruises.

More evidence of the Nerf wars. 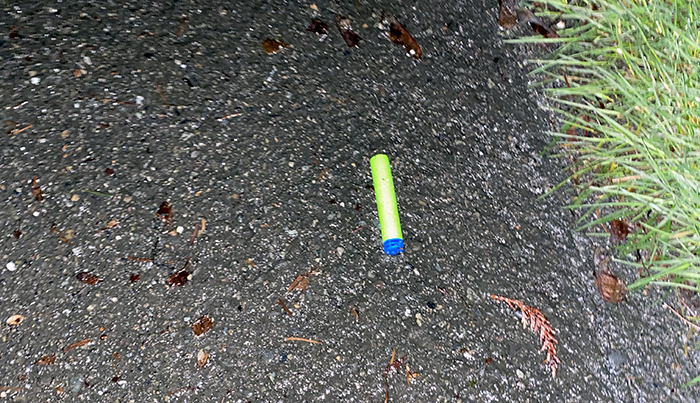 Yes, we see the turf, but we did mean Nerf wars.

We saw a glove attempting to save itself from falling into a storm drain into an endless life awash in the Puget Sound and Pacific Ocean. 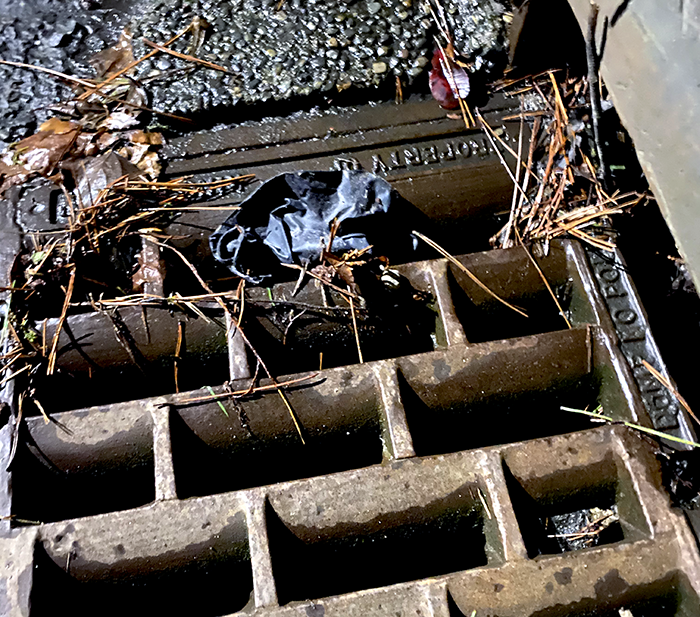 We rescued it, nursed it back to health and tossed it in the garbage can.   You’re welcome.

Someone left us a heavy present.

This glass bottle was very heavy.  We had never heard of this brand.  However, according to Wikipedia,

Also, it is D.E.W, not the moisture on the lawn.  D.E.W. are the initials of one of the original owners.

Fortunately, it was empty.

Today was a warm 50 F, but rained the entire time.  We waved to the Salinas Construction driver at the the light at 145th Street and Juanita-Woodinville Way.  As a reminder, he gave us the vests we wear on our walks.   Overall, today was a yawner.  We found the normal amount of random trash, but nothing of great interest.

Well, we did find another lost sock.

Then we found the missing link.

No, not that one, this one.

And we know why it was missing.  It had its screw loose.

We regularly harvest signs if they are lying down or are obviously out-of-date.  Today, we removed a sign that was laying on the ground.  Then we came across this one. 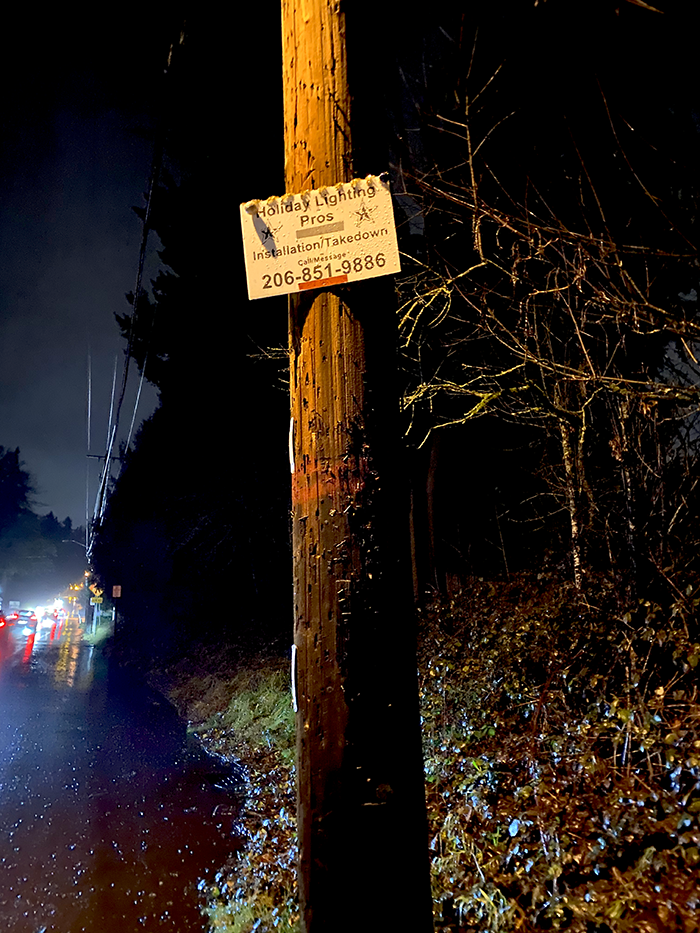 We previously called the number and asked them to take their signs down but it didn’t work, so we’ve been harvesting the ones we find.  This one was a couple of feet above our reach. Feel free to contact them to remove their sign.  In the meantime, we’ll think of a way to retrieve it.  Maybe we’ll give their number to a couple of telemarketing companies.

Today it was 49 F and had been raining, but held off during our walk.  We didn’t see any of our regulars, but got a few waves.

In the last 24 hours, we’ve had a lot of encounters with emergency vehicles.  Well, not related to us, but around us.  Yesterday evening, we met some friends at a local bar and grill on our walking route near Safeway.  Outside, on 100th Ave NE, a three-car rear-end accident had occurred and the Kirkland police responded.

Then, on the way home down Juanita-Woodinville Way, our walking route, there was a lot of police activity with roads blocked and police cars disappearing up side streets.  At one point, lights appeared behind us and we pulled over to let an EMT vehicle and a trailing police car pass.

The next morning we heard that there was an attempted carjacking ending up with a person getting a shot in the arm, and not in the good way.  The perpetrator is still on the loose, but probably long gone.

This morning we found some more stolen mail.

While we were sorting out the junk mail from the bills, we heard a loud bang like a dumpster lid being slammed.  We sorted the mail and later in the day delivered it to the homes to which it was destined.

However, as we continued to the end of Juanita-Woodinville Way, we saw more emergency vehicles including a police car, an EMT vehicle and a fire engine. 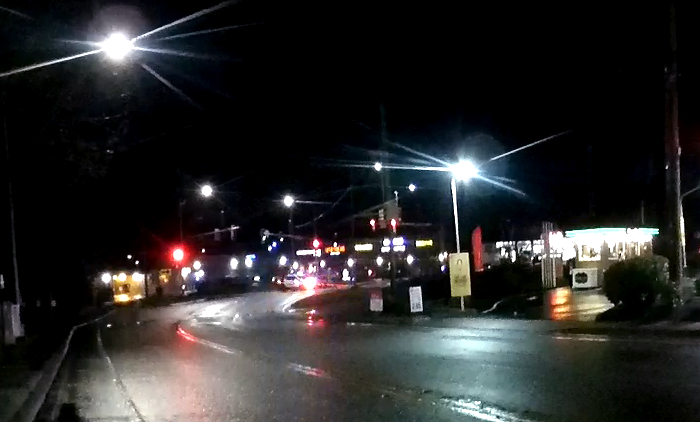 They all stopped a little way down 100th Ave NE near the location of the accident that occurred the previous evening.

This looked like more than a simple rear-end accident. 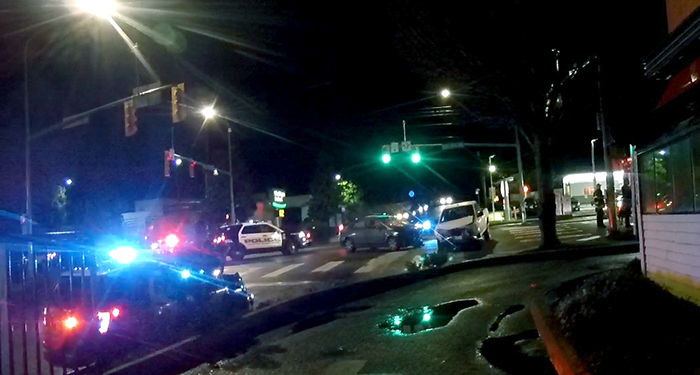 We didn’t stick around to pick up the car parts.

As we approached the intersection of Juanita-Woodinville Way and 100th Ave NE, Janet suggested we continue up 100th into new territory to a bus stop that was in bad condition.  Being of weak mind, Chuck agreed.  But before we reached the bus stop we found this mess. 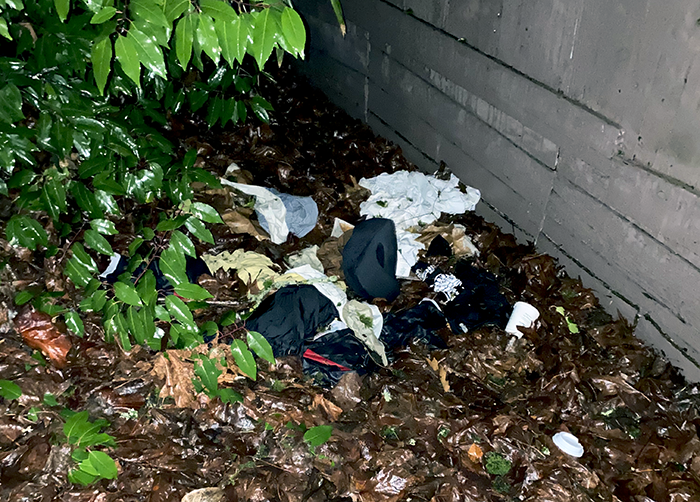 It was several pieces of clothing, two bed sheets and two pillow cases.  We stuffed everything into a pillow case and picked it up later with the car.  Whatever is recoverable will go to Goodwill, which, ironically, was just across the street.  Hey, we won’t cut out the middle man when we’re the middle man.

Someone tossed their lunch.  Or maybe dinner.

From last night’s police activity.  We dutifully stepped around it. 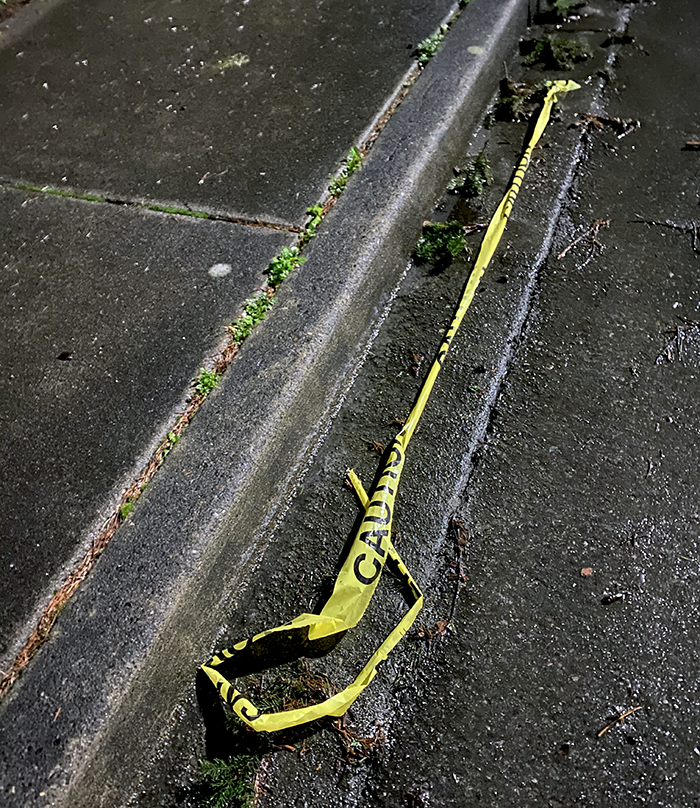 We found another dog poop bag.

Empty, though.  No, we’re not disappointed at all.

We found a ball that may make it to our ball collection.

It is a bit deflated.  If it has a puncture, it is a goner.  If it can hold air, it has a nice place in our ball collection.  Yes, it is harsh, but somebody needs to make the tough decisions.

On the up side, we found a match to the sock we found a couple of days ago.

We’ll wash them and send them to Goodwill.  If you want to impress someone with your worldly travels, visit Goodwill and get your Alaska socks.

Today was a bit cooler and misted for most of our walk.  We removed a roadkill squirrel and two rabbits from the road.  The squirrel was a mess, but the rabbits were in better shape.  Well, they were dead.

During our weekday walks along Juanita-Woodinville way, we wave to the metro buses and most of them wave back.  This morning on our way up the Brickyard Road, a bus came up from behind, honked and waved to us.

We picked up a lot of car parts today including two hubcaps.

They were near the freeway about ten feet apart. 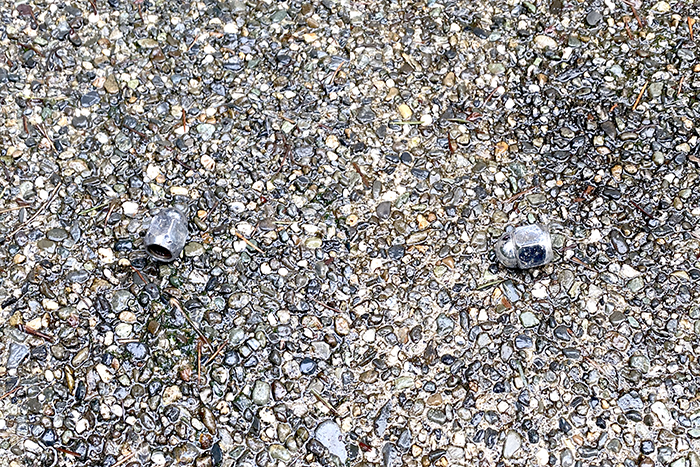 Most of the random plastic parts went into recycle bins along the way, but the hubcaps and this big piece of plastic,

got carried home due to a lack of recycle bins past the freeway.

We also found evidence of drugs, some legal and some not.  A legal insulin flex pen.

Illegally tossed by the side of the road. 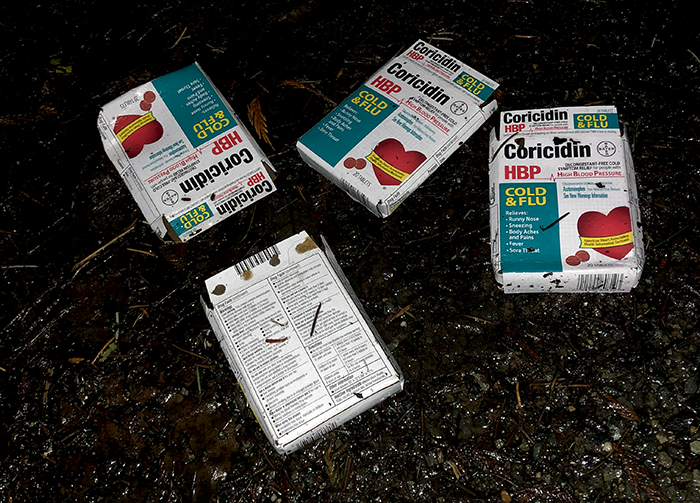 But, probably illegally used by some teenagers to get high.

And a used needle. 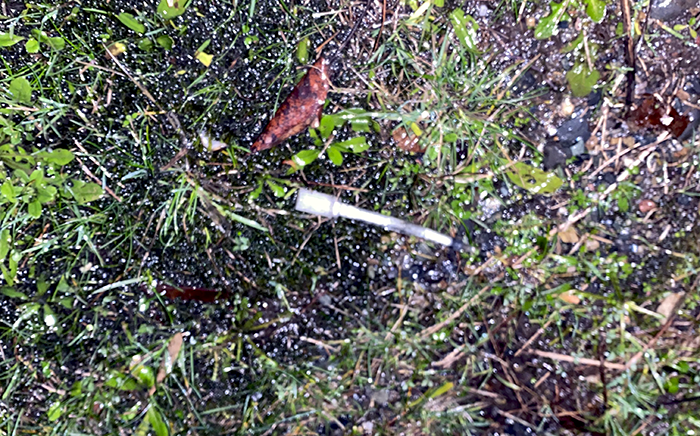 We found an Amazon box. 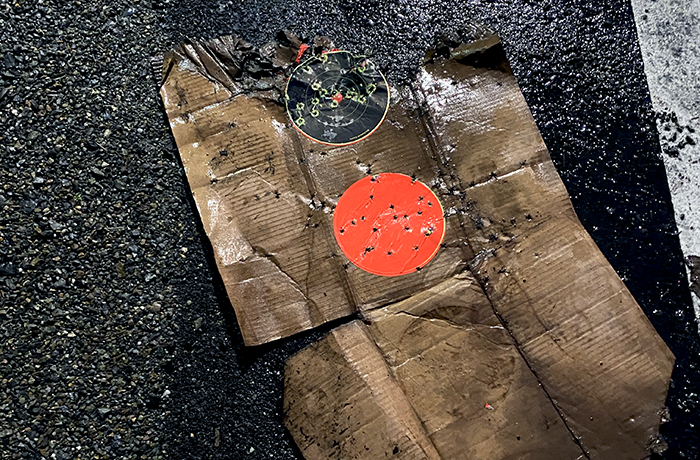 We turned it over and found someone had been using it for target practice.  It was in front of the Securité Gun Club.  When we attended their grand opening, they were touting their high-tech target system.  We hope this isn’t it.

This one is identical to the one we found a couple of weeks ago, except the handle of this one was destroyed.

This time we only found the back of the phone and the battery.

Someone lost their Apple Airpod charger/case.

In front of the apartments on Woodinville Drive we found this mess.

We used to try to pick up the cigarette butts, but it has gotten much worse.  We now try to ignore it. 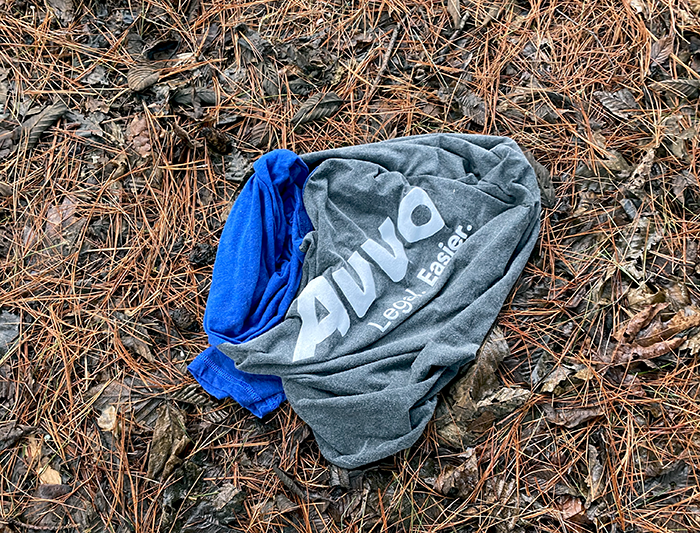 Avvo is a lawyer directory and rating company.  At their site, you can select a lawyer by type and rating.  Did you know there are 192 Entertainment Attorneys in Seattle?  So, what do they do to entertain us?  Stand-up comedy?  Or take-the-stand-up comedy?

It was across the street from a house, so we placed it in their yard.  The other option was to haul it home and but we were already overloaded.

Under the freeway, we found a dog or baby gate.

It was definitely more than we wanted to haul, so we left it and picked it up later with the car.  The duck came along for the ride.

Some guy trying to eat his lottery tickets? 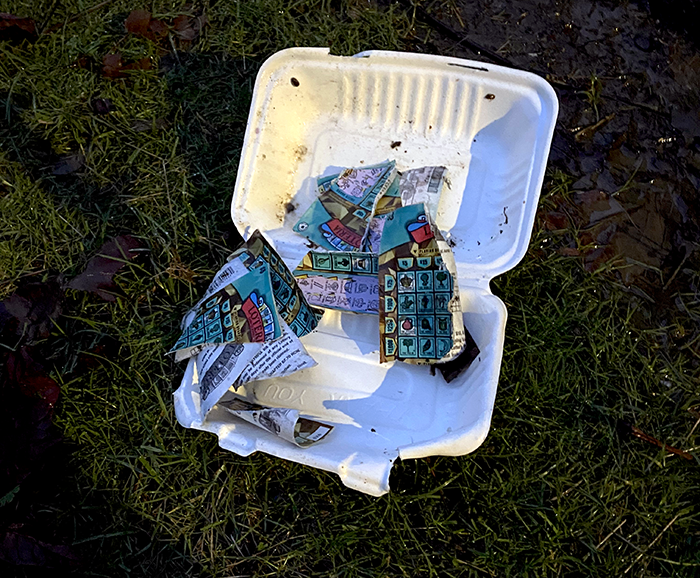 Maybe he didn’t have any money left for food?  Maybe Washington State should follow the lead of New Hampshire: Bacon-scented lottery tickets.  It might  make them more palatable.

It was less than a half-inch tall.  Sadly, it was so small that when we got home, we couldn’t find him.  May the Force be with you BB-8.

This caught our eye. 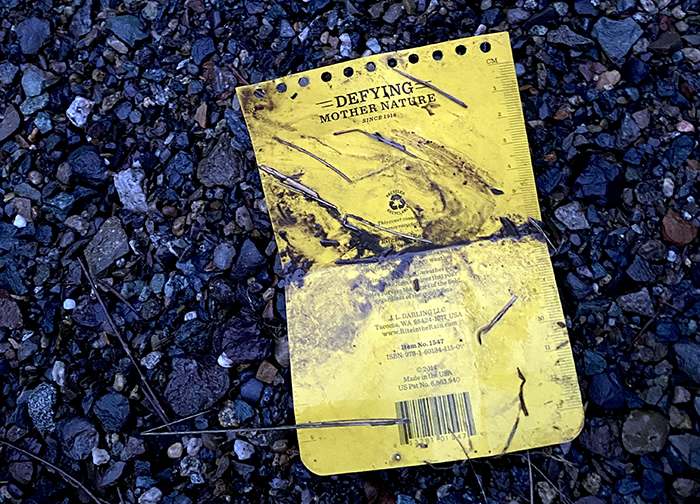 “Defying Mother Nature since 1916.”  We went to their website, www.RiteintheRain.com.  This is the back cover of notebook designed to be water resistant.  We only found the back cover, so we can’t attest to the rest of the pad, but the back seemed to be holding up well.  Other than getting separated from the rest of the book.

It appears to be an engraved keepsake from AlliedSignal Instrument Systems’ Youth Day, 1996.  At least we think it says “Youth.”  It could be Mouth Day, but that doesn’t make much sense.  AlliedSignal purchased Honeywell in 1999 and adopted the name.

Someone tried to lure us in.

But we didn’t bite. 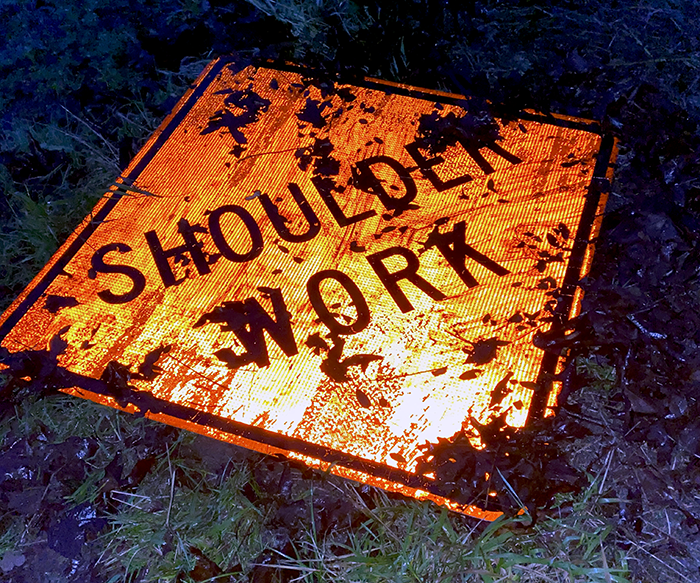 On the back was the the name, National Barricade, and they have an office in Seattle.  We left it leaning against a speed limit sign and later sent an email stating approximately where it is.

To check the address, we opened up Google Maps Street View.

Yep.  There’s the sign by the side of the road.