We feel betrayed.  We have two weather apps that we use, Yahoo and Dark Sky.  Dark Sky has been the most accurate.  This morning, Yahoo indicated it was currently raining, increasing over the next hour.  Dark Sky showed no rain in the offing.  Well, it wasn’t raining, so we trusted Dark Sky and left without rain gear.  About a mile into our walk, it started misting and increased into a full-fledged rain.  Not a monsoon or Mississippi rain, but a Seattle rain.  We checked Dark Sky and it showed it was raining.  Thanks a lot.  We arrived home totally soaked.

We flung a small, black bird, not a crow, and two opossums.  We got a honk from Mr. Handyman and a bus driver.  We also got a big wave from an someone with his arm out the window on the driver side and a hound dog out the other.

We found a dead crow in the exact same place we found another about a month ago. 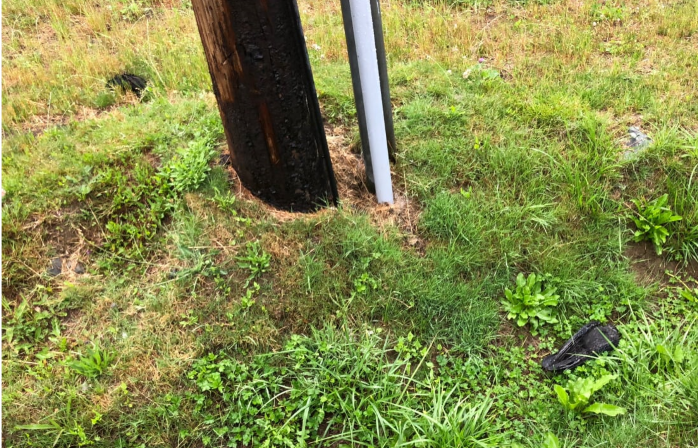 The remains of the other crow are still there.

Our serial McLitterers are still active.

This morning, it was raining a slight mist.  The Yahoo app predicted rain while Dark Sky again indicted mostly cloudy.  I checked with Alexa and she said mostly cloudy also.  We learn from our mistakes and suited up in our rain coats.  Of course, a mile into our walk the mist cleared.

After a rain, we find fewer cigarette butts on Juanita Woodinville Way because they are washed down the drains.

We rescued a hubcap and recycled it. 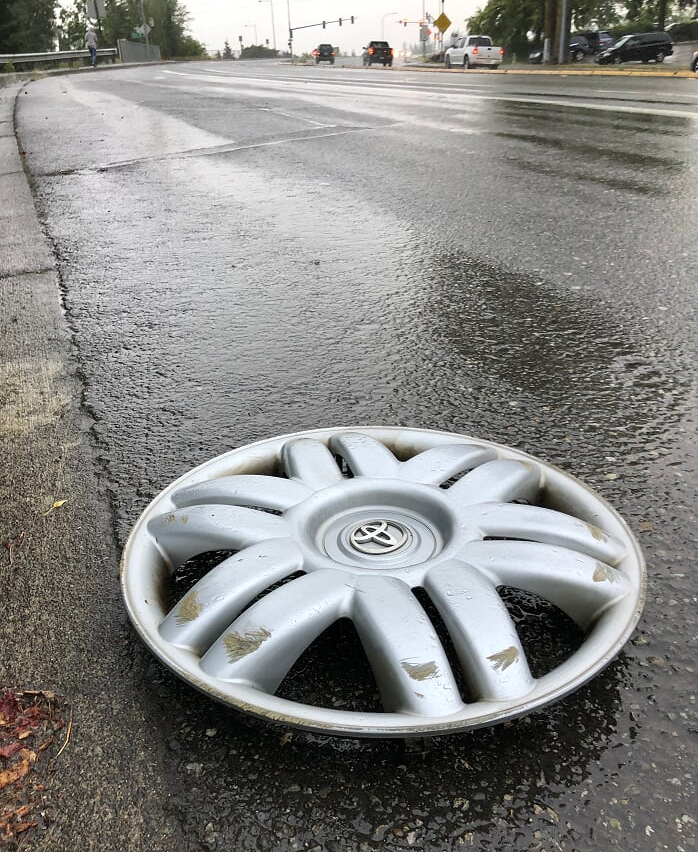 The majority of the hubcaps we find are from Toyotas.  They may have a design flaw or perhaps there are just more Toyotas on the road than other cars.

We flung a rat that had been struck by a car.

It may have been Mr. McSqueekypants attempting to hitchhike out of town after being recently evicted by Steve and Hilary. 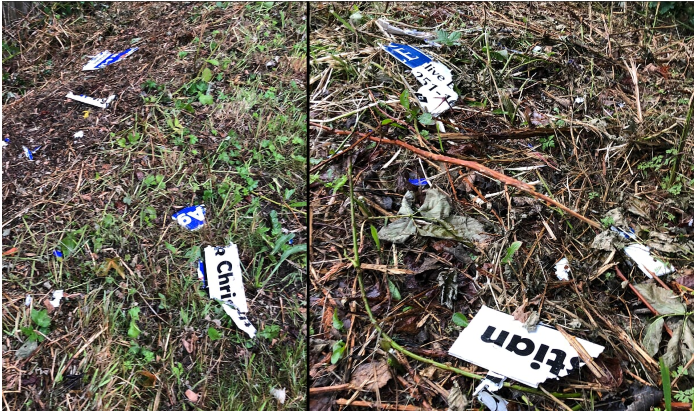 We left the mess and will contact the city to complain.

We didn’t have any honkers and now wavers except on Norway Hill.  We did see Vanessa on her way to work.

We also found a box near the apartments on 112th Ave NE with two heavy garbage bags full of rotting food.  They were fairly heavy, so we retrieved them with our car after we got home.  It was very aromatic.  It is a good thing it is garbage day.

This morning was dry, but more rain is on the way.  We picked up a moderate amount of trash.  We got quite a few waves and honks from Mr. Handyman and the Seattle bus driver.

The walk started on a bad note.  We reached the bottom of the Tolt Pipeline and spotted some trash. 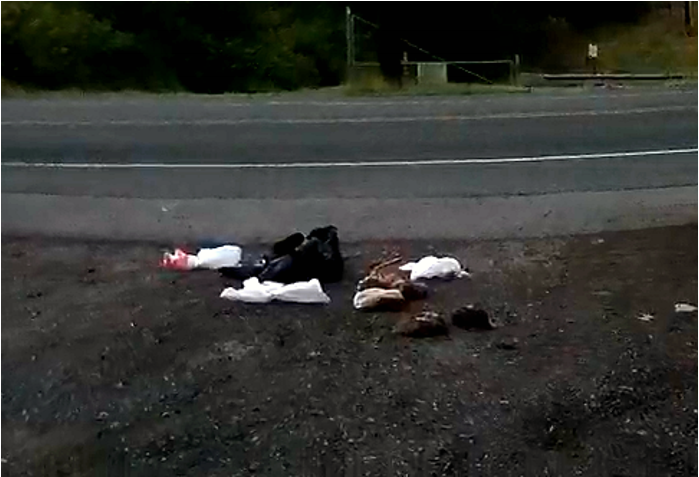 It was a large black trash bag with six dead squirrels, each wrapped in a small shopping bag.  Some varmint tore open the black bag and pulled out two of the squirrels.  We removed the squirrels and threw them in the berry bushes along the pipeline.  Then bagged the bags.  Nice way to start our walk. 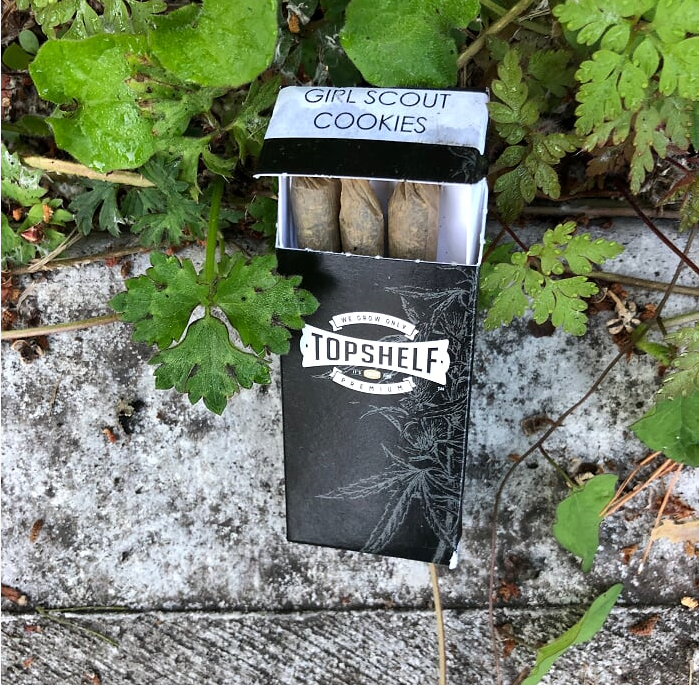 This is the first unsmoked marijuana we’ve found.  However, we have found a number of unsmoked cigarettes like these today.

At Washington prices, these four cigarettes cost about two dollars.

The LimeBikes must like the top of the hill.

This was a nice morning to walk.  We waved to Salinas Construction and got a honk from Mr. Handyman.  We flung a squirrel and a rabbit identifiable by one unlucky foot.

Today was our last day to cross paths with Michelle before she moves away.  She met me with a Big Gulp cup. We gave her a farewell card and thanked her for waving to us over the last three years.

When we reached the corner where Kirkland mowed the signs down, someone had picked up the big pieces.  We picked up most of the rest, then continued down to Simonds Road.

We spent a good 15 minutes picking up mowing debris.

When we reached the top of Norway Hill, we found one of the LimeBikes on the ground a little up the hill.

The back wheel was locked, so I carried it down to the fence.  The bike threatened me again.  We looked for the other LimeBike, but, sadly, the only thing we found was its leg. 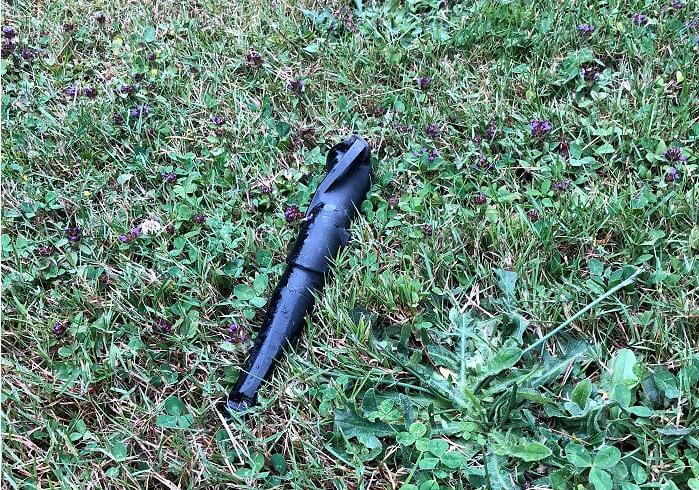 Today was a nice, overcast morning for a walk.  We got honks from Mr. Handyman and the Seattle bus driver and we flung a squirrel. 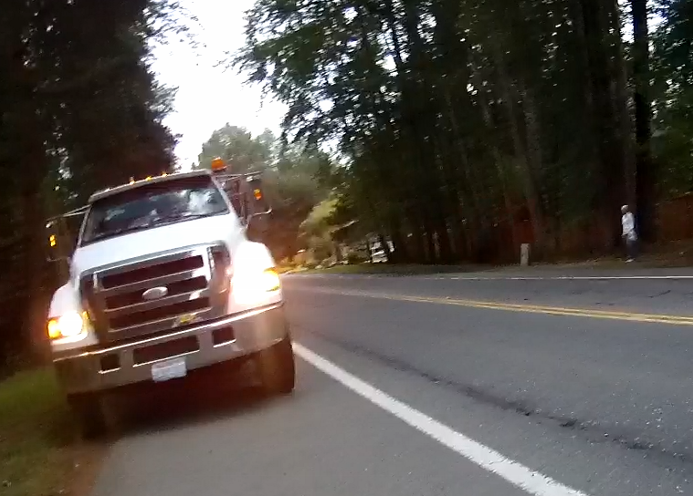 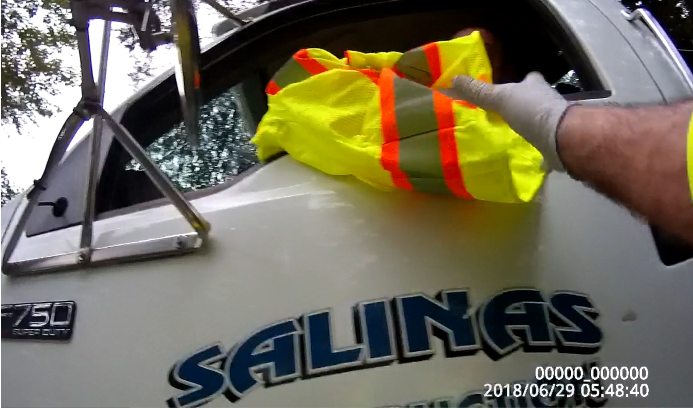 He gave us another Salinas Construction Paving Team vest.  This is a size small for Janet.  Janet is thrilled.

At the top of the hill, the second LimeBike is back near the end of the trail.

Someone must have found it and put it back on the trail.  I’ll bet they got threatened too.

This was a cool, overcast morning.  We had grandkids over night so Chuck walked alone.  There was a moderate amount of trash and I flung two squirrels, a small bird and a rabbit.

As I came out of our cul-de-sac, I spotted a black bag in the middle of the street.  It was actually two empty bags, a cooking pot cozy and a set of jumper cables.  Go figure.

I found another pair of gloves.

This time, they are my size.

The Riverside Mobile Estates next door always has a lot of litter including candy wrappers, water bottles and other miscellaneous trash.  “Mobile Estates“, by the way, is an oxymoron.  Today, there was fireworks debris, four beer bottles and associated caps, a coke can and several water bottles.  This is known as Trailer Trash.

At the Bothell City Limits, the farthest eastern extent of our walks, Woodinville begins.

Come on, Woodinville, clean up your act.

Another new cairn to mark our way.  We have a mystery pathfinder in our midst.

On the way back, I found a flattened can of red PVC pipe cement I needed to pry off the road.  About 100 feet later, I found a pair of (undamaged) channel lock pliers with a splatter of the PVC cement to add to my “Found” tool collection. 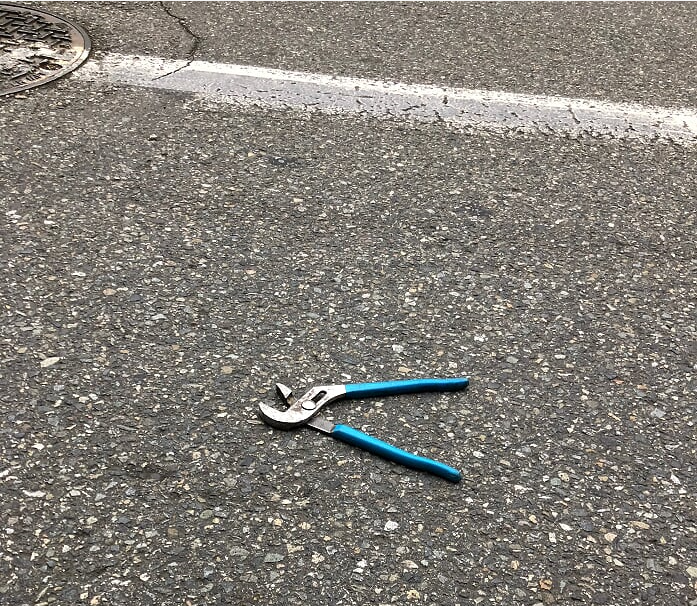 In another 500 feet there was a roll of Teflon pipe thread tape.  Some plumber dropped his load here.

Of course, this being Riverside Drive, I also found two of the large wine bottles, one broken and one intact.

Perhaps we need to try this Vendange California Chardonnay.  Maybe we will have the urge to dig trash out of our trash cans and strew it along the road.

2 thoughts on “Janet Gets Vested”