Today was a little brisk, but comfortable. No money and no roadkill to speak of. We won’t count the desiccated squirrel we found next to the sidewalk. The TrashWalking judges would never allow it anyway. We did get the normal amount of headlight-blinks, honks, waves and drive-by expressions of thanks, which we do appreciate.

On with the walk, near the KinderCare, we found a scooter knocked over outside the fence. 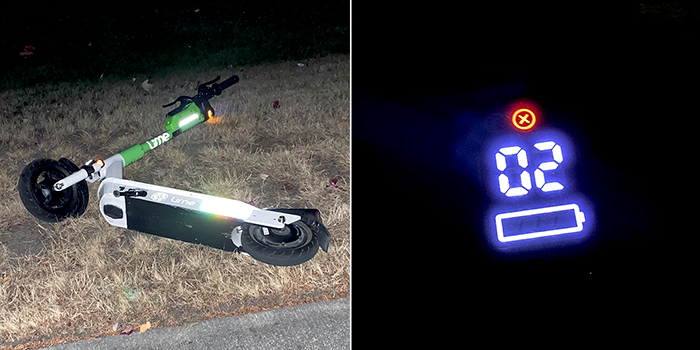 It could have been a KinderCare toy, but probably not. We certainly did not try to toss it over the fence. But we see why they left the scooter. Only a 2% battery left. But really, did you need to knock it over? We stood it up.

In the Safeway parking lot, someone is selling a motorcycle.

A 2020 motorcycle for $2200. This sounded a bit on the inexpensive side. The sign said, “My kid can’t have this.” We would like to hear the story. But after some Googling, the Motorcycle was probably about $3000 new. A “250cc Ghost Harley Cruiser Chopper,” we think. Okay, but we were expecting a real Harley on the right. $22,000. That is more our style and more out of our price range. Oh well.

Along Juanita-Woodinville Way, eight, count them (we did), new signs. One or two are okay, but eight? And who do you think will end up picking these up when they fall down? “Buying a Home? Get Cash Back.” This must be a great deal if we can buy a home and get money too. What’s wrong with this picture? 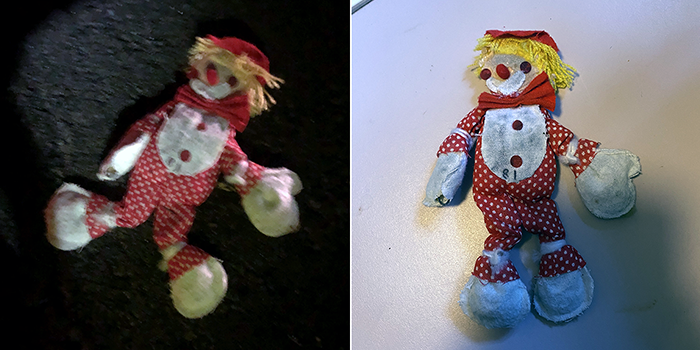 Her picture was blurry, so we retook it in brighter light. It is interesting in that it has a wire frame inside and can be “posed.” It looks old, but we could not find a match on the Internet, and there are no tags, so it might be hand made. The number “81” is on its belly. We don’t know. But Janet has become attached to it, so it will end up in our collection.

Okay, this is getting disgusting. Looking inside there were flies, spiders, and other assorted insects, but absolutely no Gypsy Moths.

Coming down the hill toward our home, we found a large ball.

Last week, we found a very large, three-foot-diameter ball. We couldn’t fit it into our trash bags, so we left it. Today, the large ball was gone, but on the opposite side of the street was a slightly smaller two-foot diameter ball to replace it. Strange.

As we approached home, at the curve where we found a car a few weeks ago, someone dumped several items.

A broken chair, a shop vac and two broken TV monitors. Plus, there was a black mystery bag which we left unopened. We reported it to the Bothell public works. We hope they enjoy the mystery bag.

Okay, we needed to remove a very sloppy rabbit from the road but no money. Why are we out here at O-dark thirty anyway? Well, obviously to find spectacles that folks have lost.

Yes, as usual, cheapo readers, not worth much. Especially in this condition.

Then there was another Toyota hubcap.

We think there is a class-action lawsuit here with the number of Toyota hubcaps and wheel covers we find. We are serious. We will not let them toy-ota with us.

Continuing on, at the park-and-ride, someone was shooting up.

Unlike most needles we find, this one was fully capped. Finally, a considerate addict.

We did find a nice tool.

We carried it home carefully. Nobody was going to chisel us out of it.

Along 100th Ave NE, we came across the remnants of an accident. 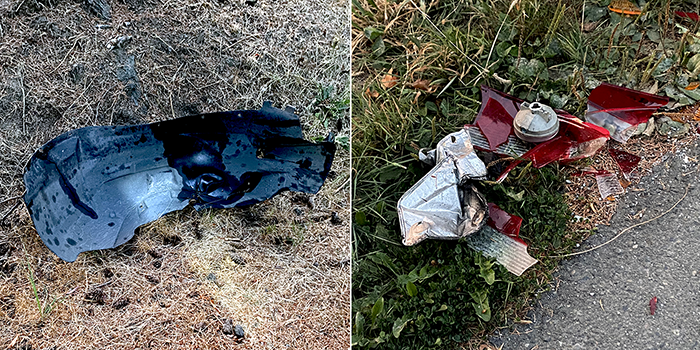 A large, plastic wheel well enclosure and several other broken car parts. We left the enclosure for later pick-up and carried the rest home to recycle.

Directly across the street was a Mercedes German Military Ambulance, or “Krankenwagen” which looked to be unrelated to the accident.

There was a sign in the windshield stating that a tow truck would be by at 8:00 am this morning. So evidently the Krankenwagen needs a Krankenwagen.

A sign that winter is approaching, our first neck gaiter of the season.

Or is it a pandemic face covering? We hope they realize the gravity of the situation.

We found a scrap of paper.

“PinkBootsarewalkin1961.” And we got a hit on Google.

It is from the BAM (Brasserie Artisanale Marsac) in Marsac-sur-l’Isle, Dordogne France. Okay, it’s probably a coincidence since we doubt the BAM microbrewery existed in 1961.

So, this is getting worrisome. We are halfway through our walking week with no money found. We have not been shut out in a while.

The electric scooter we picked up on Monday is now completely dead.

We’ve entered the Seattle cloudy fall/winter with little sun, so will this stay here until spring? Did we mention it is also under a tree?

We found a Sawzall saw blade that, judging by the tape, someone used it to saw by hand.

What did they use the saw motor for? Hammering in nails?

The Seahawks held a training camp in Bothell and lost a towel.

They’re probably still looking for it.

We have been cleaning up an area of 100th Ave NE for a stretch of about 400 feet past a bus stop. 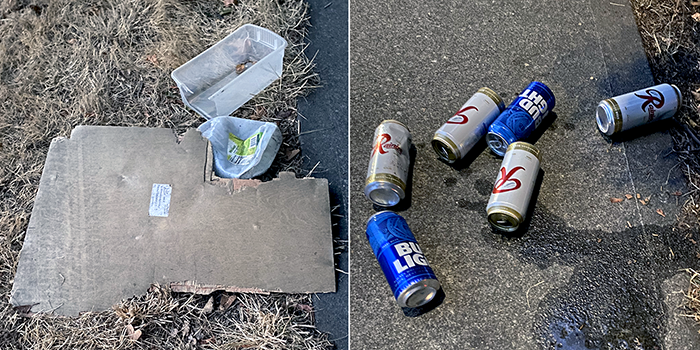 This is what has accumulated along since last week. The beer cans were scattered behind the bus stop. Another opportunity for a trail camera.

Another day with no money. Come on, folks, loosen up.

No, old Seahawks memorabilia does not make up for no money. Besides, this is something from the Washington State Lottery.

On another stretch of road, we have been grooming on Thursdays, we found more trash including some drug paraphernalia.

Another needle, with a cap and a cracked crack pipe.

We also found a tool nearby.

We are unsure what drug users would use a socket extension for.

It has a gold star on its head, but we are not sure what the green balls are. Failed implants?

This morning was darker than normal and there was water falling from the sky. We wore our rain jackets and got drizzled on the entire walk. This is the first time we’ve worn our jackets in several months.

We finally picked up a coin today! 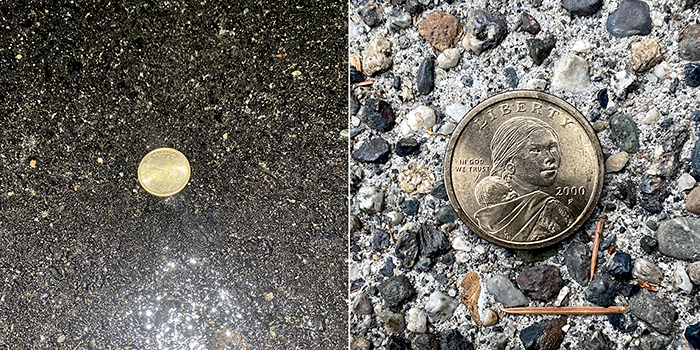 It was too dark to see what it was, but it looked foreign. However, when we got it home, we saw it was a “Golden” Dollar with Sacagawea on it. Although called the Golden Dollar, the coin is mostly copper with no gold at all. It’s a long way from the old silver dollars which were 90% silver.

But we kept our distance. He didn’t seem too perky this morning. 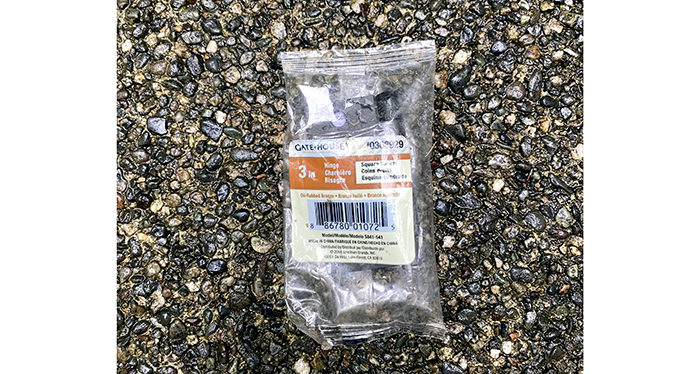 The homeless ball we saw on Monday was still there and Janet decided it would be fun to kick and coax it down the hill to home. 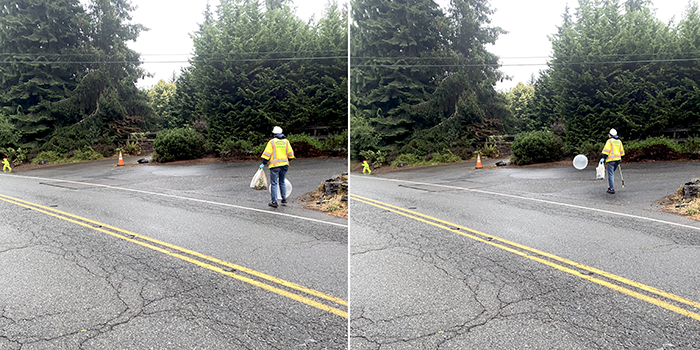 And Chuck only needed to retrieve it once from a ditch.

This morning we started walking in the tail end of a storm that came through last night. There were a few branches down from the wind, but it had calmed by the time we left home. 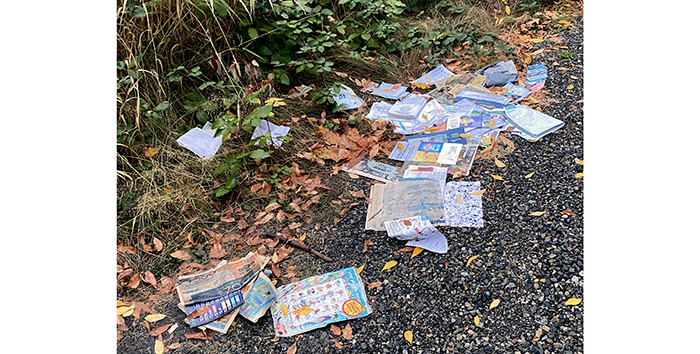 It was mostly junk mail that got recycled. We will take the couple of real pieces of mail to the post office.

Someone left us an unopened Twix Bar.

Unfortunately, it had melted, so got dumped in the trash.

What is it with people dumping their vehicle floor mats?

We pulled a crescent wrench out of the bushes.

It looks to have been there a while. We will need to see how it cleans up to determine if it makes it into our tool collection.

Okay, we take back all our grousing about not finding money early in the week. Today we found major money. 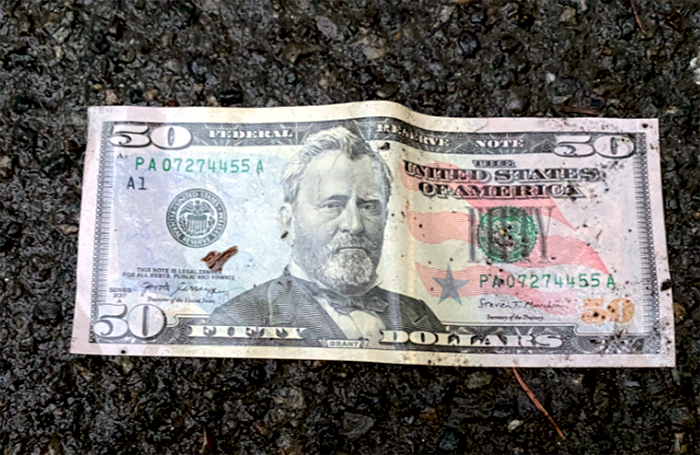 This is the biggest money find we have had. The previous record was two twenties. We did find the corner of a one-hundred-dollar bill once, but we are certain it was counterfeit. So, we worried that this one might be counterfeit also. When we arrived home, we checked this site and concluded that this bill is real. 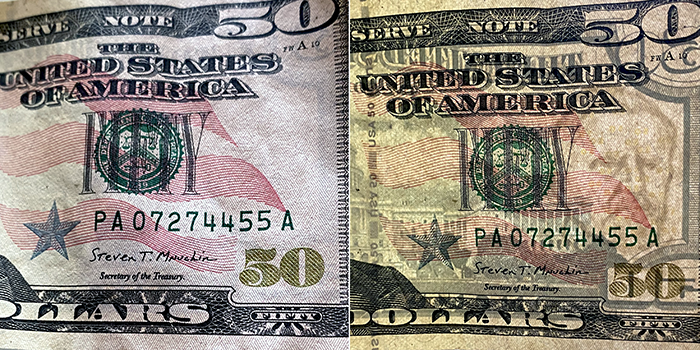 On the right, holding it up to the light, there is a security strip with “USA 50” on it running vertically through the U in United. There is also a watermark on the right that is a portrait of Grant. The third way to tell is the 50 on the bottom right changes color as it is tilted in the light. Ka-Ching!