This morning was cold at 32°F and a little uncomfortable.  There was quite a bit of small weekend trash including a lot of cigarette butts for some reason.

Money Monday is back!

We found a nickel and a penny about two miles apart.  Six cents, we’ll take it, given the condition of Wall Street.  From now on, there will be bear markets, bull markets and corona markets.

We found a discarded medical mask.

With the shortage of masks these days, we considered sanitizing and using it.  But, there’s also a lack of sanitizer, so we tossed it in the trash.  What a waste, “litter-ally.”

We thought the first was a piece of fruit, but turned out to be a very chewed dog toy, that we tossed in the trash.  The second was across the road from a house with a dog, so we tossed it back in their yard.  The third was another tennis ball at the top of the Tolt Pipeline.  It’s in our ball collection.  Yes, we had a ball today, but only one.

Someone lost their tailpipe. 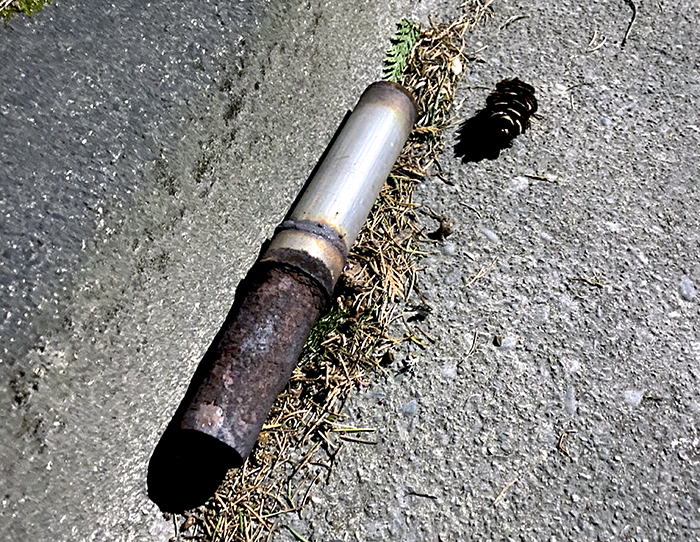 They fell for pine cone in the tailpipe trick.

We found a lost dog… collar.

The dog may still be lost.  The collar was well-identified with several tags including one from PetSmart with the dog’s name, Beatty, it’s address and phone number.  We called the number and tried to leave a message, but the mailbox was full.  It’s hard to teach dogs to empty their mailbox.  All they want to do is bark at the mailman.

We had an audience this morning.

A group of llamas.  Or are the alpacas?  In 2015, we traveled to Peru and learned that one runs with their tail up and the other with it down.  We don’t remember which, but it wouldn’t help in this case anyway since they weren’t running.  But we found this on the Internet.

We certainly hope they were alpacas, but it might be fun to hang out with llamas.

Girl Scout gangs have been a problem in this area for the last few years.  Girl Scouts flocking houses, what a mess.  Why can’t they stick to tagging like other gangs.  Next, we’ll see MS-13 selling cookies.

As regulations attempting to control the Coronavirus gets more strenuous, the traffic keeps getting lighter.  At the park-and-ride bus stop this morning, there was only one rider where there are normally between twenty and thirty.  And he was probably a bus driver on his way into work.  The amount of litter is dropping [pun intended] also, though we did find enough to half-fill our bags.

We did find more money today.

Another penny.  Hey, it adds up.  Eventually.

This was scattered along a section of Juanita-Woodinville Way.  It was all ads and junk mail, so nothing worth returning to the homes.

We walk past a Church on 145th and for the last few weeks they were displaying a banner.

“We are in this Together.”  Today we saw this. 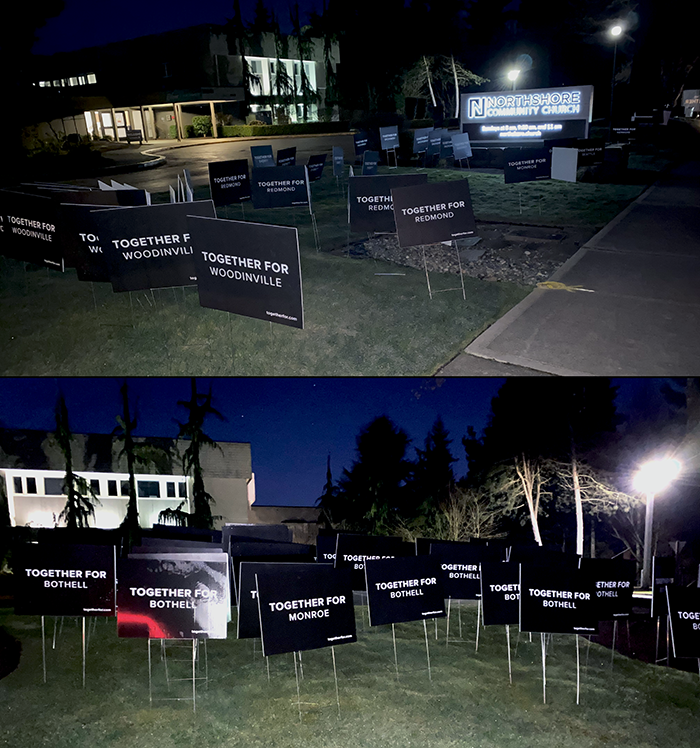 There were about 100 signs on the lawn, several for each city in the area.

Then, at the top of Norway Hill, we saw one of the signs.

Perhaps they want folks to take the signs and display them.  It seems like a good idea during this time of doom and gloom.

It was a ghost town out there today.  The traffic was about as light as we’ve seen it on a work day.  Seven buses passed us today and we counted two riders.  One bus even had it’s internal lights off and we saw another with his phone in his left hand.  It didn’t matter since his bus was empty and he was the only one in sight at the time.

We had two vehicles give us honks, including one bus and one passerby yell “Good morning, neighbors” to us.  People seem to be more friendly during these times.

We didn’t find much interesting today.  Another ball outside a baseball field.

We tossed it back.  AGAIN.  They need to teach these kids to bunt.

We found an envelope from the Northshore School District. 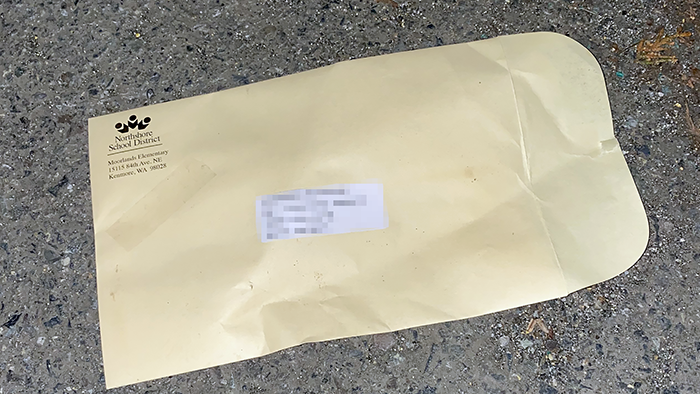 All the schools are shut down, so this probably had a homework assignment for a kid.  The kid must have found it before the parents. 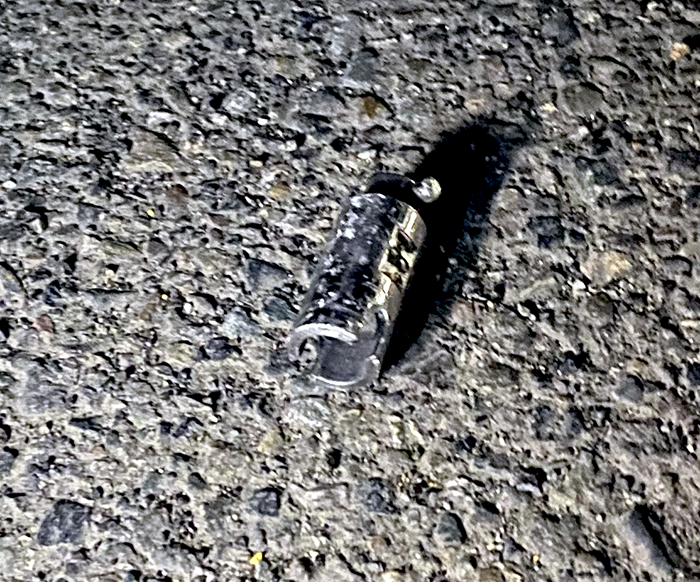 We don’t know what it is but it must be useful for something.  We put it in our lost tool collection.

A shoe behind a tree. 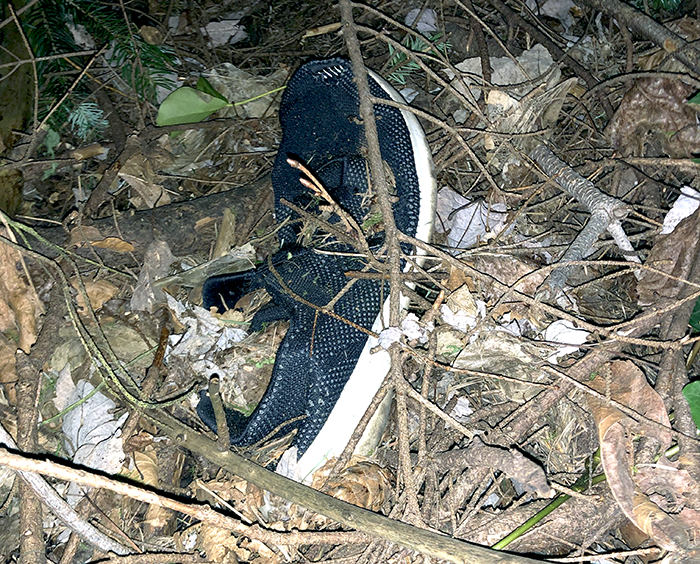 We only found one; it wasn’t our size; and it had moss growing out of it.  Not even fit for Goodwill.  Into the trash.

At a bus stop across from Safeway,

we found a cigarette butt, a lollipop and an empty Pepsi can.  Given the number of bus riders these days, this is one mixed up rider.  He finished the cigarette and Pepsi, but wasted his money on the lollipop.  They say there’s a sucker born every minute.

We found another Pepsi container. 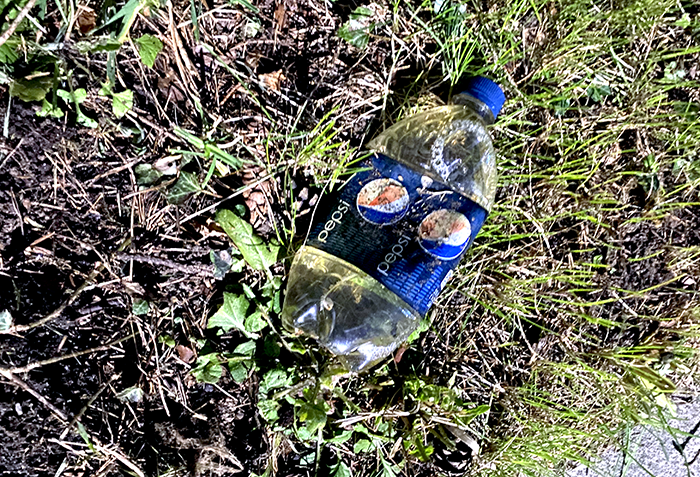 Today there  was a little more traffic but way below normal.  Still, we’re finding a moderate amount of trash.  Oddly, we are finding about the same number of cigarette butts as we did previrus.  It may be our imagination, or perhaps we need yet another obtuse study related to the Coronavirus.  Too late.  It’s been done.

The ridership at the park-and-ride was also up today.  There were two riders at the bus stop.  They were talking to each other, about six feet apart.  Good hygiene.

In the gutter by the park-and-ride, we found several cans and bottles.

There were six cans of soda pop, Coke and Fanta, and two bottles of water.  All were full, or leaking very slowly from their contact with the road.  We did the merciful thing.  We gutted them, let them bleed out and took the pop tabs.  We have feelings too.

Continuing with the food-at-a-bus-stop theme from yesterday.

At least this guy neatly finished his meal.  Of course, he could have cleared the table, the trash can was about fifteen feet away.  We bused his table, and he didn’t leave a tip.

On our walks, we’ve seen various critters.  When they are close to us, they tend to scamper away.

This fellow just went about his business chomping on the fauna and ignoring us.  We are not experts on rodents, but think it’s a Norway Rat.  It’s also known as brown rat, common rat, street rat, sewer rat, Hanover rat, Norwegian rat, Parisian rat or wharf rat.  Good Grief, this guy’s been around.  He’s probably spreading the Coronavirus.  We stayed at least six feet away from him.  Okay, it might have been a her.  We didn’t check.

Up Norway Hill from our home, we found another wine box. 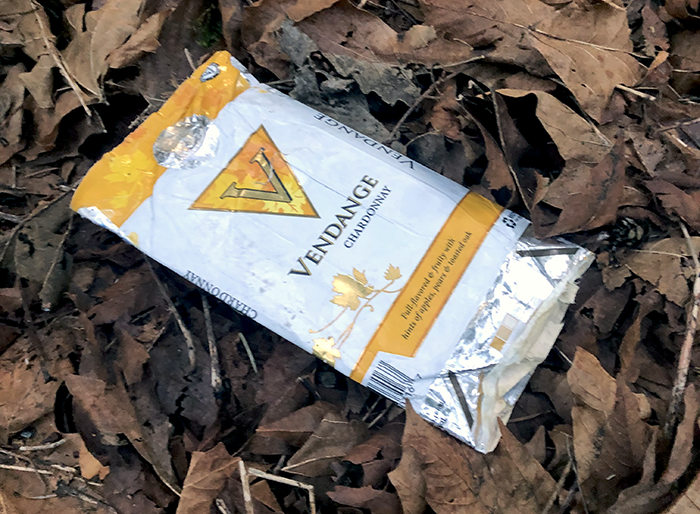 Whoever’s tossing these has a very erratic schedule, but is consistent with the location.  We could set up a camera, but that would make us look obsessive.  Well, okay, perhaps we are.

We found yet another dog-poop bag. 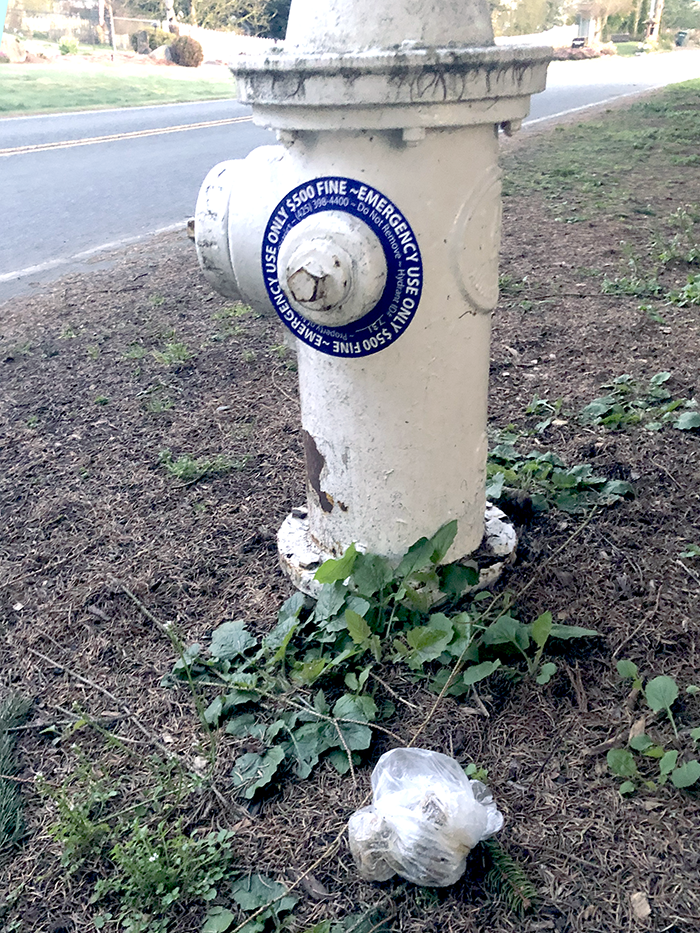 Traffic was a little heavier than expected for a Friday and a moderate amount of “normal” litter, but little of interest.

For some reason, we found a record number of balls for a single walk.

Six balls.  Three were outside the KinderCare facility.  One was behind a bush and Janet kicked it back toward the fence under which it rolled.  Now we know why we find a lot of balls at this location.  They should fix the gap under the fence.  The kids might start getting away.  Two more balls were found together outside a fence of a home that backs up to Juanita-Woodinville Way.  Then later we found a baseball.  All of them got tossed back into the local yards.  “Huh.  Where did the mossy baseball come from?”

We picked up a large box lid.

We don’t know what was in it but it was evidently “super” and “cool.”

This appears to be a piece of equipment, but with only icons, we can’t be sure.  As a public service, we will try to interpret it.

Here is the incorrect and correct way to climb a ladder.  Actually they are both incorrect.  The guy on the right has his head through the rungs.

Never do this.  It hurts your head!

Uh, do we even we want to know what this is?  We think not. 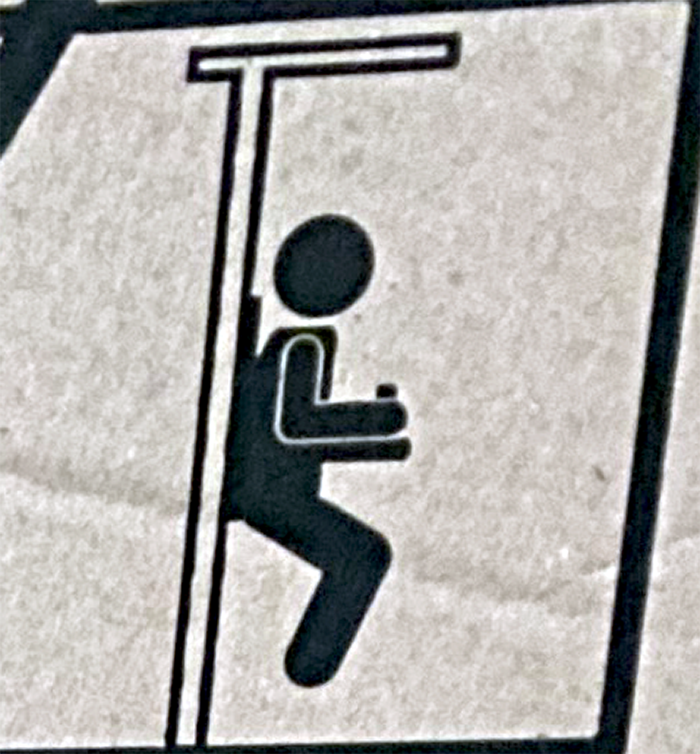 At least that’s our interpretation.

We had a nice Saturday walk this morning but there was a lot of miscellaneous trash, mainly food wrappers.  We don’t know if this was due to the warmer weather this week or the fact the more people are eating takeout due to the virus lock-down and tossing their wrappers.

But someone accidentally littered some money near downtown Bothell.

Five bucks!  It’s been a while since we’ve found folding money.  We’ll take it.

The money almost made up for the rubber gloves and poop bags we picked up this week.

Ten bags and sixteen individual gloves.  That’s an increase of both over the last week.  The rise in gloves is due to the germophobic society we’ve become.  The poop bags are probably due to the warmer weather.

This was a thinking-of-you card, so the thieves probably didn’t get any money.  The address was washed out due to the moisture, but it looked like it belonged to a nearby mailbox and we left it on top.

We picked up a braid headband.

We checked online and some of these get pretty pricey, but probably not this one.  Doubt we could get very much for it on eBay. 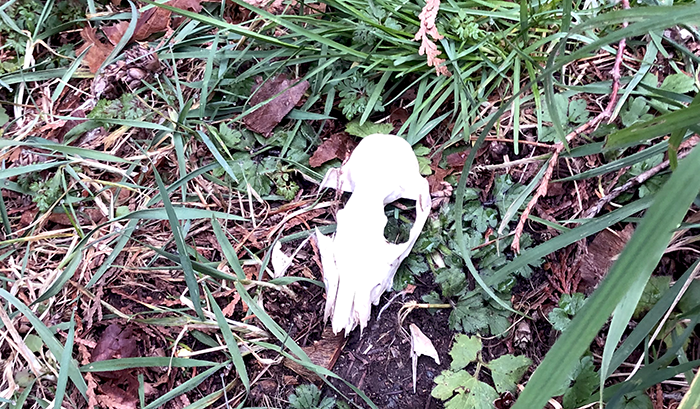 Totally out of his skull.

We found a joyful rock.

With emphasis on the word flat.

It looks like some folks had a couple of parties.

A license plate changing party?  Sounds like as good an excuse as any.  Also cans of O’doul’s beer left over from a St. Patrick’s day party.  It seems these guys are not practicing social distancing.

Or maybe they are playing is safe. 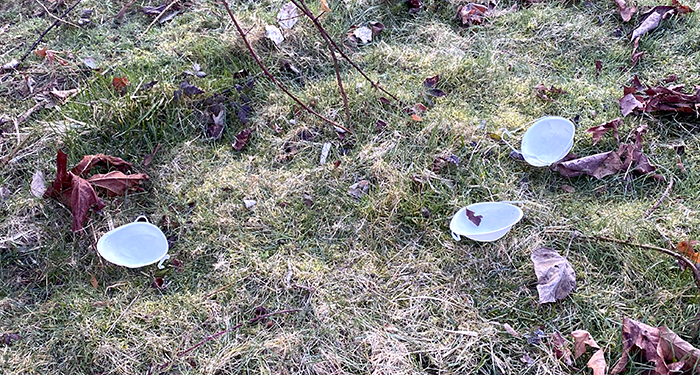 Nearby, we found some discarded masks.

Another hubcap that was damaged.

We had to haul it home to recycle it.  Hubcaps don’t fit into the trash receptacles at the bus stops.  Very inconsiderate of the metro system.

Yesterday, we found a lot of balls.  Today, it was clothing.

The first thing was a Bula-brand beanie cap at the Sammamish River Park.  It had been in the bushes for a while.

Then a pair of jeans. 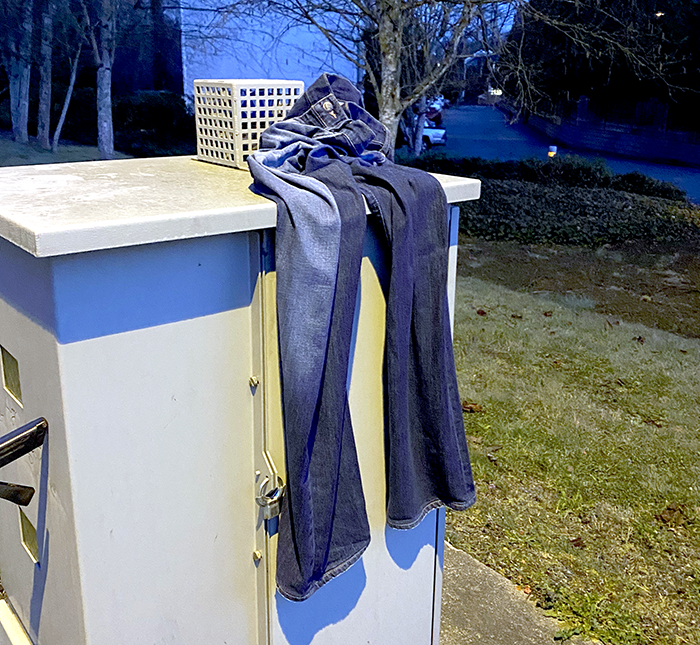 They looked so comfortable.  We left them in case the owner realized he wasn’t wearing any pants.

Well, this was different.  A fire hydrant attempting to disguise itself as a rooster?

More clothes at the park-and-ride.

We stuffed them into an extra bag to haul home.  We look weird enough when we walk, we didn’t want to be seen pawing through ladies’ clothes in the parking lot.

When we got home, we sorted them out.

Three more swimsuits!  Two weeks ago, we found one, last week two and today three.  Six swimsuits.  This is becoming a Saturday ritual.  We wash most of the clothing we find that are in reasonably good shape and send to Goodwill.  But with this many swimsuits, we may keep them and set up a concession at the park-and-ride.  Anybody interested in a swim suit – we will let it go cheap.

One thought on “Swimsuit Saturdays”